Bill Bailey raises over £100,000 in the memory of late fellow comedian Sean Lock

Bill Bailey has raised over £100,000 for Macmillan Cancer Support in memory of his friend and fellow comedian Sean Lock.

On Monday, the comic, 57, finished a 100-mile walk for the charity alongside Lee Mack and Sean’s loved ones, and said he’s been ‘moved’ by the generosity of the public who came out to support him during the trek.

The walk started in Bude, Cornwall on August 3 and finished in Combe Martin, Devon sticking to the beautiful coast path.

Achievement: Bill Bailey has raised over £100,000 for Macmillan Cancer Support in memory of his friend and fellow comedian Sean Lock after walking 100 miles from Devon to Cornwall

Bailey said that many people had approached the group to offer money and kind words, and he has been overwhelmed by the goodwill and support.

‘I have just been knocked out by the number of people who have come up to me, handed me money in the street just offering donations. 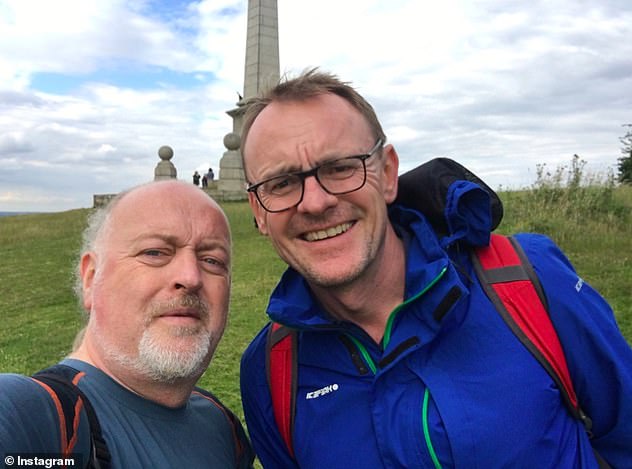 Tribute: The comic said he moved by the generosity of people after raising the money in memory of his friend and fellow comedian Sean Lock, who died last year after battling cancer 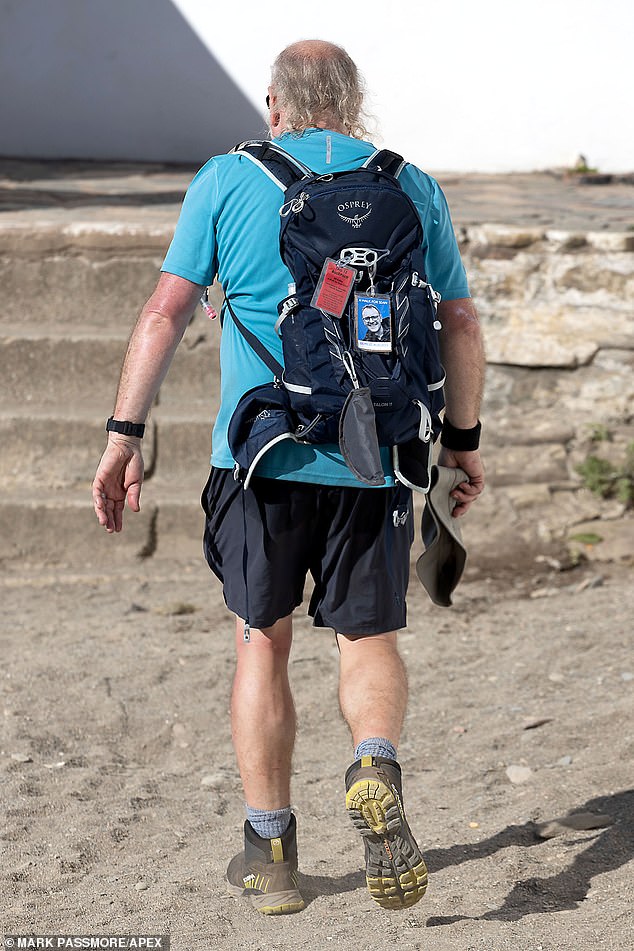 ‘Talking to people, hearing their stories of how cancer has been in their lives.

‘How they’ve lost loved ones, it’s been quite moving.’

Sean, known for his surreal content and deadpan style, starred as a team captain on Jimmy Carr’s popular Channel 4 comedy panel show and its spin-off 8 Out Of 10 Cats Does Countdown.

The comic died in August 2021 from cancer and his passing lead to a widespread outpouring of grief in the comic world. 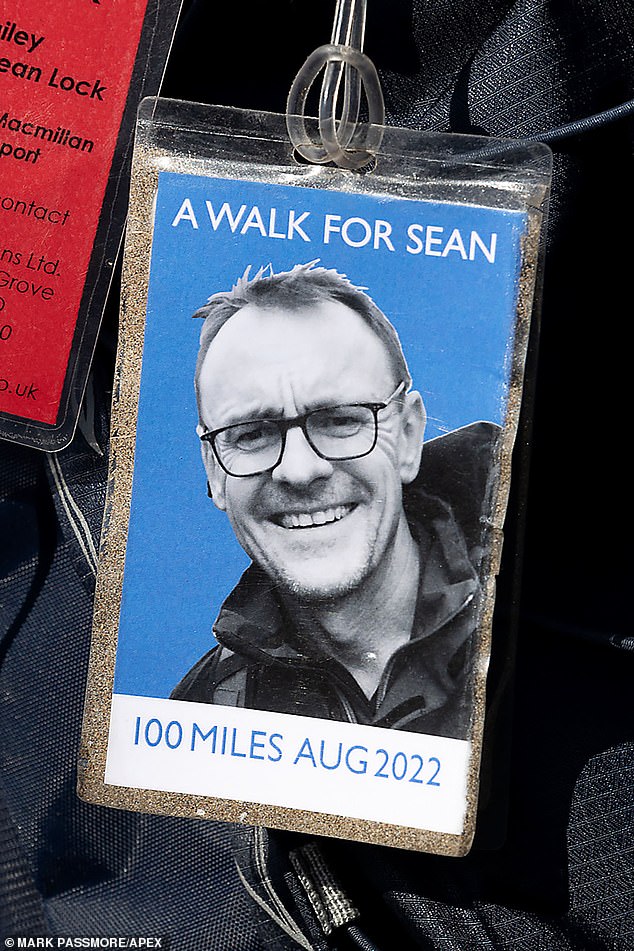 Tribute: Bailey carried a wallet with a picture of Sean Lock – whom the walk was in memory of – following his death last year 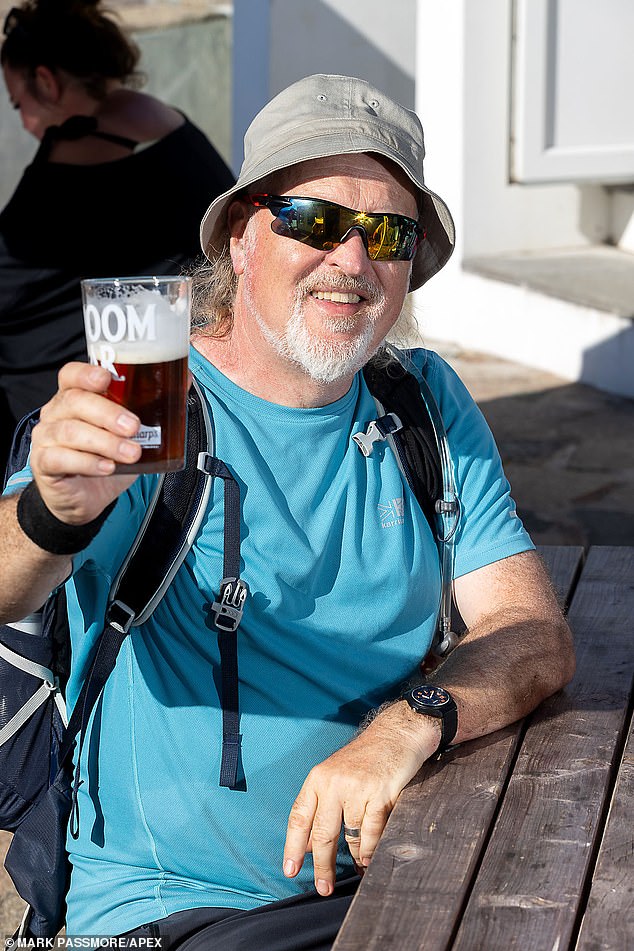 Toast: Bailey finished the 100-mile trek with a well-deserved pint in Devon, adding he’s been ‘moved’ by the public’s generosity

Carr led the tributes, saying it was ‘brutal news’ and that he was ‘laughing and crying’ while watching clips of Lock – while Lee Mack, called him a ‘true original both in comedy and life’.

Father-of-three Lock, who had two daughters and one son with his wife Anoushka, appeared on Have I Got News for You, QI, and They Think It’s All Over – and also wrote and starred in the popular BBC sitcom 15 Storeys High.

Jon Richardson, Lock’s fellow captain on 8 Out Of Ten Cats, praised his ‘incredible comic brain’; Susie Dent from the Countdown version described him as an ‘exceptional man’; Ricky Gervais said he was ‘one of the funniest, most influential comedians of a generation’; and Alan Davies said Lock was ‘funny on stage, hilarious off’.

Lock’s agent labelled the Woking-born star as ‘one of Britain’s finest comedians’, saying his ‘boundless creativity, lightning wit and the absurdist brilliance of his work, marked him out as a unique voice in British comedy’. 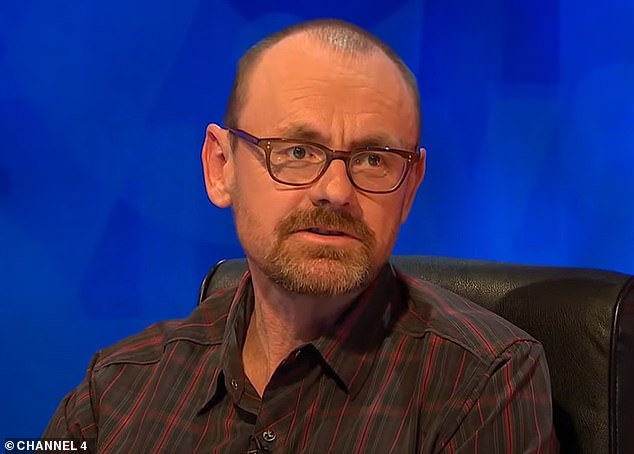 Sad news: Sean passed away last year after battling cancer, and was best known for starring on 8 Out Of 10 Cats and its Countdown-themed spin-off (pictured in 2017)

It is not known what form of a cancer Sean battled, but he previously made a full recovery from skin cancer which he blamed on over-exposure to the sun while working on building sites before he became a comedian.

He previously credited a one-night stand in the 1990s with saving his life, after the woman he was with spotted a black and misshapen patch of skin on his back, which he had removed in hospital and it was diagnosed as cancer.

Fellow comedian Harry Hill revealed Lock had spent time in a hospice, telling the Guardian: ‘At his best, Sean reminded us all what we loved about a great gag and why we got into comedy in the first place.

‘That’s why he was so often called ‘the comedian’s comedian’. He took his illness in typically dry style. I heard he was in a hospice for a bit of a rest. I called him up. ‘Wow!’ I said. ‘A hospice, what’s that like?’ ‘It’s OK,’ he said ‘… and the sex is amazing’.’ 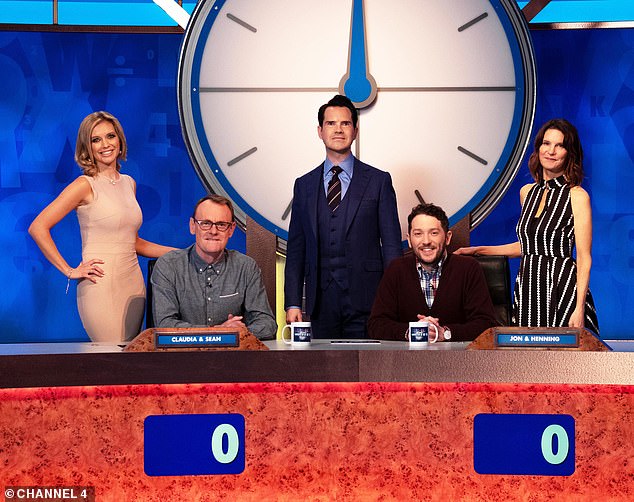