A lawyer who represented Bill Cosby in his sex assault case has been suspended indefinitely amid claims she misappropriated funds, as her former clients detail how she would demand upfront payment but then would cash the money and deposit the funds into personal accounts, according to legal papers obtained exclusively by DailyMail.com.

Monique Pressley became well-known for her appearances as a legal contributor across news networks where she launched a vigorous defense for Cosby when she represented him before quitting his legal team in 2016.

Since then, the self-described Democratic strategist has frequently appeared as a legal analyst on Fox News.

But in August, DailyMail.com can reveal that Pressley was suspended from practicing law in Washington D.C. ‘based on disability’ a month after an investigation from a disciplinary counsel said it had presented ‘clear and convicting evidence’ of her misconduct and recommended that she be disbarred.

It is unclear if the order of suspension based on disability came as a result of the committee findings.

Three former clients of Pressley’s had accused her of taking retainers and quickly depleting the funds on personal expenditures without doing any significant work, then would ask for even more money.

Instead of keeping the money in an escrow account as she was supposed to, Pressley is accused of cashing the checks, having money directly deposited into her husband’s overdrawn business account and even driving a client to a bank to pay her in cash.

And a $15,000 payment that did wind up into an escrow account was wiped from the account within a matter of days because Pressley either transferred the money elsewhere or took cash withdraws from it, legal papers state.

Monique Pressley was suspended from practicing law in Washington D.C. in August, DailyMail.com can reveal. Three former clients of Pressley’s accused her of taking retainers and quickly depleting the funds on personal expenditures without doing any significant work 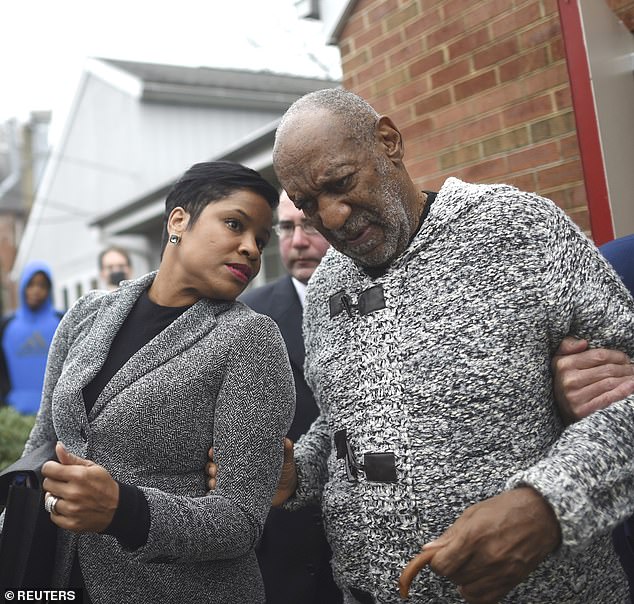 Pressley became well-known for her appearances as a legal contributor across news networks, where she launched a vigorous defense for Cosby when she represented him before quitting his legal team in 2016

In the hearing committee’s report, Pressley was accused of showing ‘a consistent disregard for the disciplinary process.’

Despite being served with a ‘specification of charges’ in July of 2018 and again in October 2018, Pressley never filed ‘an answer to charges brought against her despite being given several opportunities to do so.’

She also never showed up to hearings. The report states: ‘She engaged in a pattern of dilatory tactics at every step of the process.’

First complaint: Pressley made fellow church member feel ‘victimized’ after taking $8k and having her husband work the case – despite him not being a lawyer

The first complaint against Pressley came from Edwin and Paula Amaker, a couple Pressley and her husband Carlton knew from church where they both served as elder members.

‘The Amakers knew the Pressleys as ”trusted” members of the church community,’ the papers state. ‘They are not just regular church people. These are elders. These are people you go to when you got problems.’

After her dealings with Pressley and her husband, Paula said she was ‘blindsided’ and felt ‘victimized twice, by two people I utterly, utterly trusted.’

In September 2013, Paula hired Pressley to represent her in a claim against her former business partner, agreeing to an advanced payment of $5,000 and an hourly rate of $425, legal papers state.

Pressley told Paula she would put the $5,000 into an escrow account and withdraw the funds as she earned them. However, according to documents, Pressley did not have a trust account at this time.

The day after receiving the $5,000 check, Pressley cashed it.

After working on the matter for the next two months, Pressley told Paula in November the case would likely go to trial, and offered her the option to pay a flat fee of $3,000 to finish out the case, instead of working at an hourly rate.

The papers state: ‘[Pressley]  told Mrs. Amaker to make sure the funds were available in her bank account, so that [Pressley] could withdraw the money quickly and move forward with the case.’ 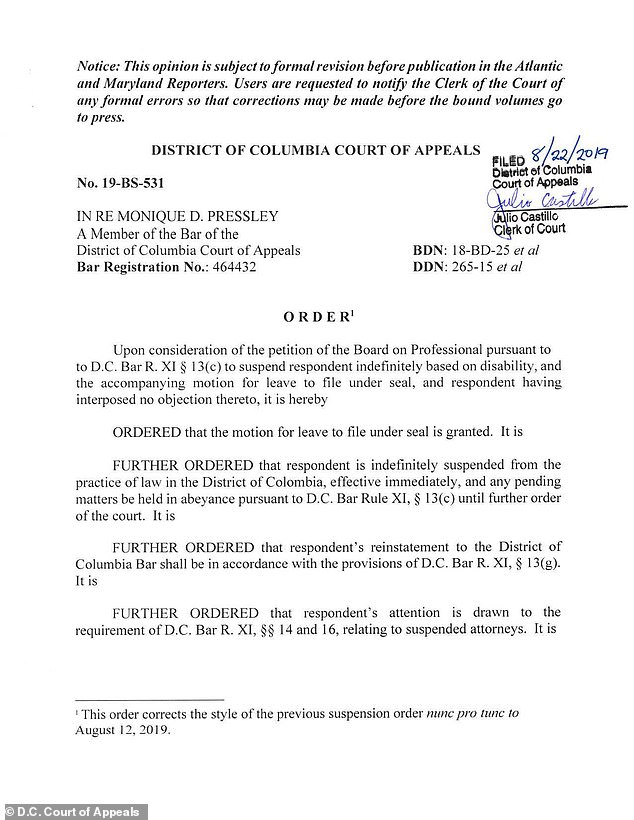 According to Paula, Pressley told her: ‘When you get the check [from your friend], cash it. Put cash in your account. So that the check that I gave her, she could cash immediately.’

Then in October 2014, more than a year after hiring Pressley, Paula felt ‘more and more upset and desperate because she was not seeing any results or evidence of work being done,’ legal papers state.

Expressing her frustration to her husband, Edwin Amaker spoke to Pressley’s husband Carlton about the matter.

Carlton told the Amakers he would handle the case ‘because Pressley was busy with other matters.’

However, Carlton was not an attorney and didn’t clarify that he wasn’t to the Amakers, according to documents.

Legal papers state: ‘For almost two years, between October 2014 and September 2016, [Pressley] did not have any communication with Paula.

‘After he ”took over” the case, Mr. Pressley continued to lead Mrs. Amaker to believe that her case was progressing.’

Things finally came to a head in October 2016, when the Amakers sat down with Pressley to discuss the drawn out case.

Pressley told them if they wanted to proceed, they would need ‘to pay several thousand dollars for additional expenses.’

Paula filed a complaint against Pressley and asked her for a refund, which as of April 2019 has not received, according to legal papers. 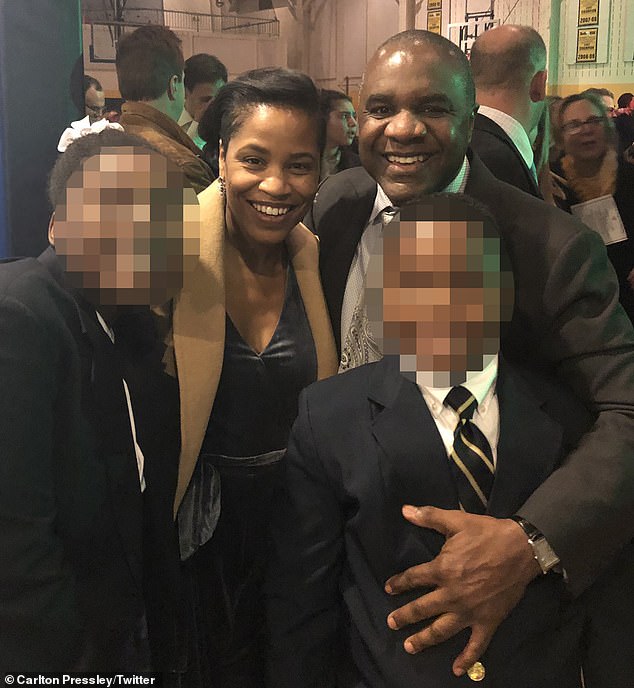 The first complaint against Pressley came from Edwin and Paula Amaker, a couple Pressley and her husband Carlton knew from church where they both served as elder members. ‘The Amakers knew the Pressleys as ”trusted” members of the church community,’ legal papers state. Pictured: Pressley with her husband and two of her children 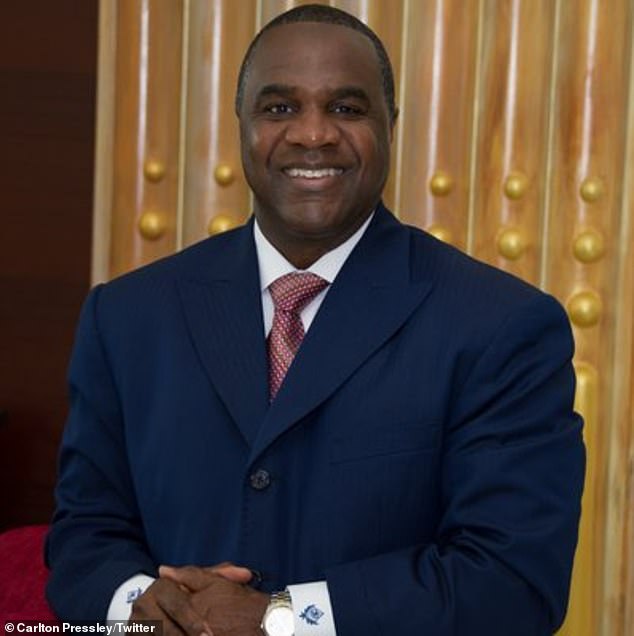 In October 2014, more than a year after hiring Pressley, Paula felt ‘upset and desperate because she was not seeing any results or evidence of work being done.’ Expressing her frustration to her husband, Edwin Amaker spoke to Pressley’s husband Carlton about the matter. Carlton (pictured) told the Amakers he would handle the case ‘because Pressley was busy.’ However, Carlton was not an attorney and didn’t clarify that he wasn’t to the Amakers

Second complaint: Pressley drove client to the bank to have him pay her $2,400 in cash

In February 2015, Pressley agreed to represent Billy Greer in his gender and age discrimination lawsuit, and ‘estimated she would need eight hours to handle the first stage of the lawsuit, including filing an amended complaint,’ legal papers state.

According to documents, she charged Greer ‘a rate of $350 per hour and asked that he pay $2,400 in advance to litigate the case through the motion to dismiss.’

Initially, Greer tried to pay Pressley with a cashier’s check but ‘she insisted that he pay in cash’ and then ‘drove around the corner to a nearby bank,’ making Greer go inside to cash the check. He then returned to her car and gave her $2,400.

Pressley then deposited the funds into an overdrawn business account belonging to her husband, restoring the balance to $2,054.74, according to documents.

But within two weeks, the account had plummeted down to $121, as the funds were spent on ‘gas, food, cash withdrawals, and other day-to-day expenses’, the papers continue.

At that point, court papers state, Pressley ‘had done no work on the case other than meeting with Mr. Greer and attending the five-minute status conference.’

By April, Pressley claimed the $2,400 payment had been ‘exhausted’ and she would need an additional $7,500 flat fee to carry out the remainder of the case, otherwise she would quit representing Greer, according to legal papers.

Feeling his ‘back [was] against the wall’, Greer reluctantly paid up, depositing the funds in three installments into Pressley’s husband’s business account, without Pressley telling Greer the account actually belonged to her husband, papers state.

In August, when the court dismissed Greer’s case, he learned that Pressley had fallen short in her representation, which led the court to its decision to dismiss his suit, according to the documents.

Ultimately, ‘Mr. Greer never got the chance to pursue his discrimination case against his employer because Respondent simply failed to follow the judge’s direction ”telling her what she needed to do”.’ 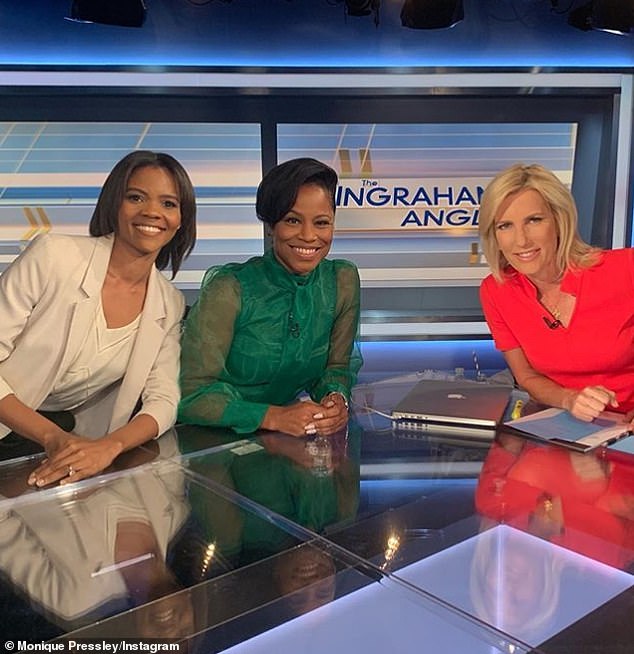 In the hearing committee’s report, Pressley was accused of showing ‘a consistent disregard for the disciplinary process.’ Pictured: Pressley (center) with Candace Owens appearing on Fox News star Laura Ingraham’s show in July

Third complaint: Pressley spent client’s $15,000 from their son’s suspicious death case in a matter of days

Randal and Tara Landers hired Pressley in March 2017 to investigate the circumstances of their son’s suspicious death and communicate their concerns to the U.S. Navy.

They agreed to pay her $15,000 in advanced fees and set Pressley’s hourly rate at $625, according to legal papers.

After signing the papers, they wired the $15,000 payment into Pressley’s escrow account, which had an overdrawn balance of –$407.00, documents state.

With the Landers’ deposit, the account’s balance was brought to $14,588.01 but less than a week later, Pressley had taken out nearly all of the funds by transfer or cash withdrawal.

Within two weeks, the account had a negative ending balance of –$549.99, according to legal papers.

Randal grew concerned that Pressley had spent his $15,000 already without completing any of the tasks they had agreed upon in their meetings.

He emailed her back: ‘I got the impression you are saying the $15K retainer has been consumed or largely consumed by document review/limited legal analysis based upon the info presented, a phone call and the generation of a strategy update memo?’ 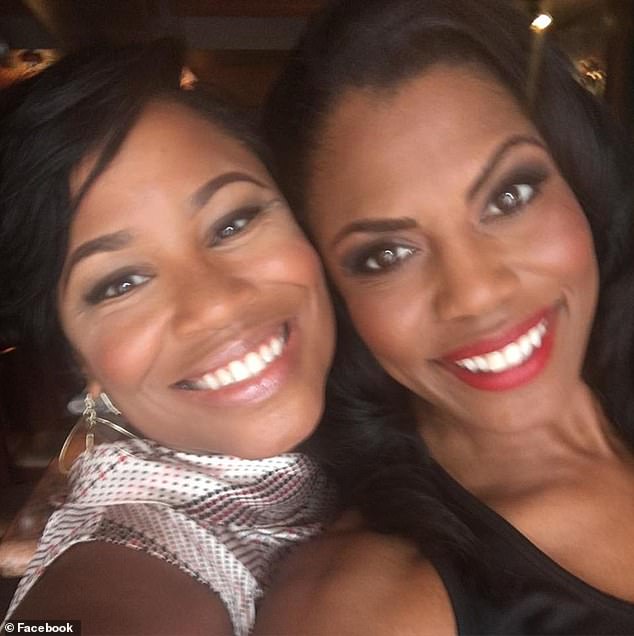 Instead of keeping the money in an escrow account, Pressley is accused of cashing checks and having money deposited into her husband’s overdrawn business account. A former client also claimed she drove him to a bank so he could pay her $2,400 in cash. Pictured: Pressley with former President Trump aide Omarosa Manigault

But Pressley said the money ‘hasn’t been consumed’ and was set aside as an ‘insurance policy for settling the account’.

She added: ‘If you do not anticipate being able to financially support completion of these objectives, please let me know.

‘We feel confident we can accomplish the goals as agreed upon, but I get the impression the reality of legal expenses may not have been fully considered.

‘If we have to revise or terminate the representation, I do understand, I just need to know where we stand as soon as possible so that we will not incur any more billable time on the matter.’

Randal asked for Pressley to hand over an invoice of the hours she had worked, but when she didn’t provide any documents, he terminated their relationship.

He asked Pressley to ereturn the remainder of the $15,000 retainer because she only ‘acknowledged 10 hours of work for June’ and ‘given how little she had accomplished on his case.’

Randal ended up getting no refund from Pressley, according to legal papers.

He said he ‘felt that he got played’, the papers state, adding: ‘He received nothing of value for the $15,000, which he paid using part of his son’s death benefit.’