The mayor announced a later date than expected for phase two of reopening from coronavirus shutdown, pushing it back to next month.

The city was originally thought to begin phase two of reopening on June 22, two weeks after it starts in phase one this Monday.

When phase two does begin, however, de Blasio said that new ways for restaurants to enforce social distancing while still opening up for business and bringing back employees were being explored.

It means that the city could allow restaurants to co-opt streets and space currently reserved for parking. 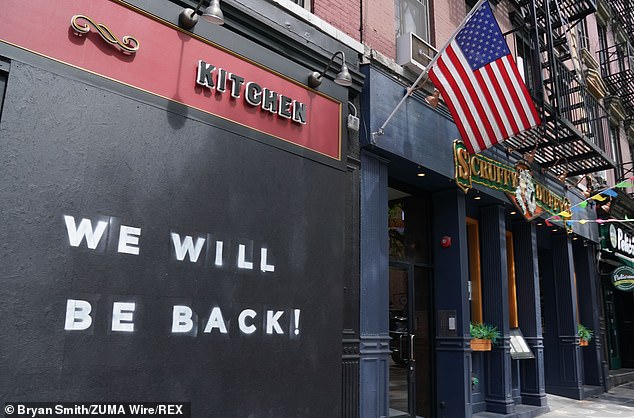 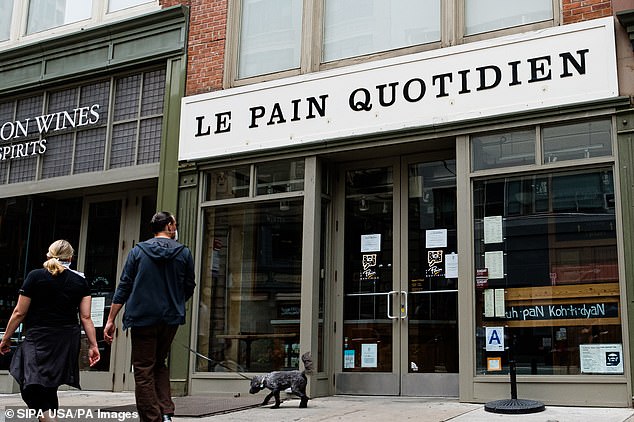 An Open Restaurant program will work alongside Open Streets to identify commercial strips with a high number of restaurants that could be closed off to traffic to allow more seating outside.

The program would also make it easier for restaurants to set up side walk seating, and curbside restaurant seating, allowing for businesses to open and hopefully rebound while maintaining social distancing.

‘We’ll do what it takes to help this key part of life in New York City, this key part of the economy, the wellspring, livelihood of hundreds of thousands of New Yorkers to come back,’ de Blasio said.

‘To come back strong starting in phase two in July.

‘This is going to be another important step but again health and safety first,’ he added.

‘In phase two, we will be able to move on to many other types of businesses and as we heard from the state, that can also include reopening a number of our restaurants with a focus on outdoors and that’s the way we want to go.

‘We have a new initiative, Open Restaurants, that will focus on what it takes to make outdoor seating work. We will provide a plan to help restaurants set up that outdoor seating to help them bring their employees back.

The mayor warned, however, that the reopening continues to rely on safety concerns involved in doing so. 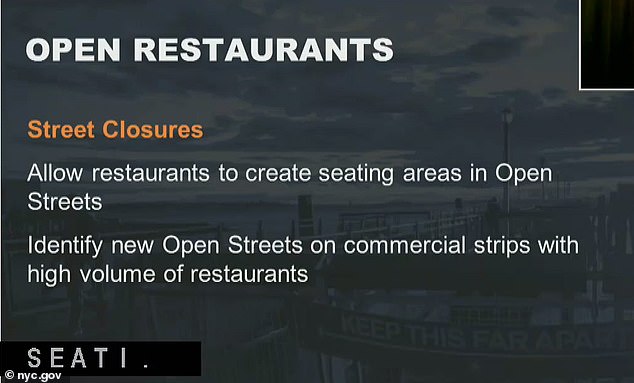 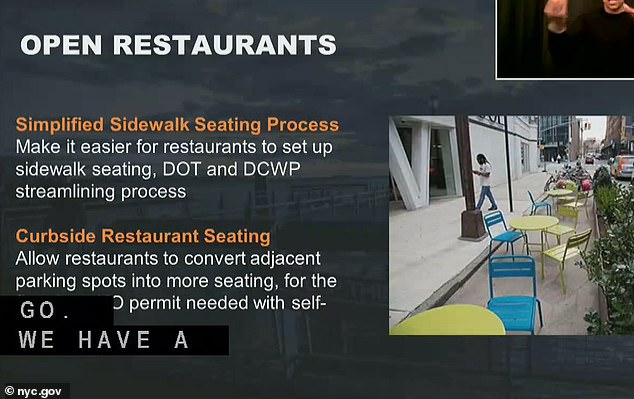 ‘Everything we’re doing, it’s to ensure that it’s done safely,’ he said.

‘To ensure that this disease does not spread, that we beat it back and as our test and tract program comes into high gear this week, that we fight back.

‘At the same time that we help businesses stay safe, bring back people’s livelihood, bring back what people love about this place, we fight this disease back every day.’

De Blasio also announced further promising signs in the drop of hospitalizations and rates of positive testing in the city.

ICU patients are also below the threshold. There are now 354 patients in ICU in the city.

The rate of those testing positive for coronavirus in New York City has now dropped to three percent, well below the 15 percent threshold. 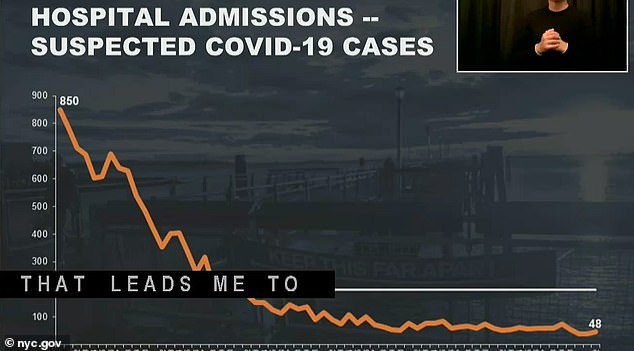 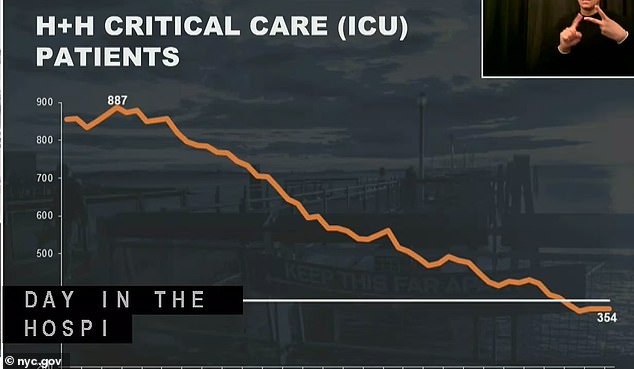 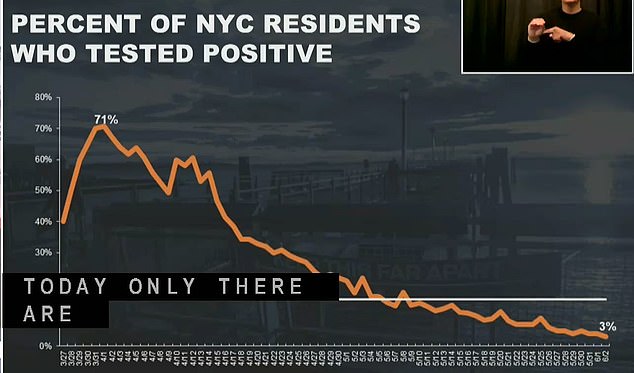 The rate of those testing positive for coronavirus in New York City has now dropped to three percent, well below the 15 percent threshold needed. This is the lowest rate of positive tests seen in the city since the start of the pandemic, Mayor Bill de Blasio said Thursday

This is the lowest rate of positive tests seen in the city since the start of the pandemic, de Blasio added.

ICU space, hospitalizations and positive test rates were three of the main factors holding back the city’s reopening.

As of Friday there were 202,317 confirmed cases of coronavirus in New York City.

There were also 16,992 confirmed coronavirus deaths and a further 4,760 deaths that are thought probable to have been linked to the disease.

According to data from NYC Department of Health, there were no confirmed coronavirus deaths in NYC on Wednesday and three probably deaths.

There were just 27 new cases confirmed.

The news of NYC’s latest time frame for phase two came after Governor Andrew Cuomo announced Wednesday that restaurants in the seven regions of the state that have already entered phase two of reopening can reopen for outdoor dining from Thursday. 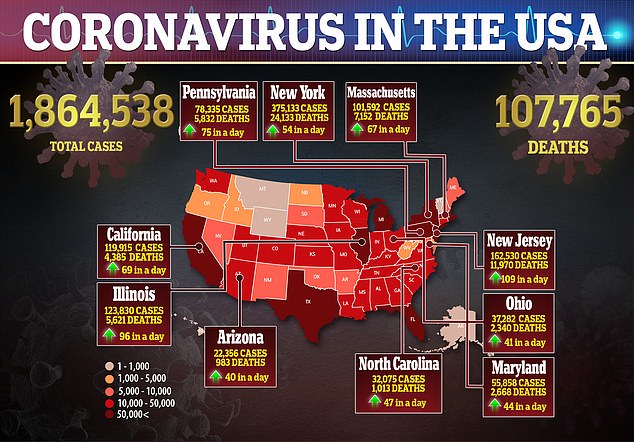 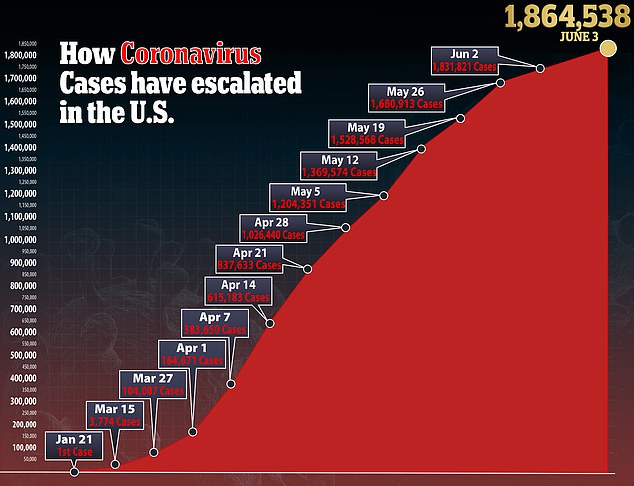 ‘We are continuously evaluating activities that can be safely reopened, and today we are adding outdoor seating at restaurants to phase two,’ said Cuomo.

The latest easing of coronavirus lockdown restrictions applies to the seven regions that have entered the second phase of the four-step reopening plan, which includes the Capital Region, Central New York, the Finger Lakes, the Mohawk Valley, the North Country, the Southern Tier and Western New York.

The areas that will have to wait longer for outdoor dining include Long Island and the mid-Hudson Valley, which entered the first phase of reopening last week, and New York City.

As the virus epicenter of the world not long ago, New York City trails behind the other regions in the states in the reopening phases.

Restaurants and bars were some of the first businesses shuttered in the state back on March 16 to help slow the spread of coronavirus.

Many stayed open for takeout and delivery service but this has not been enough to limit the widespread job losses across the industry.

Nationwide, the restaurant and bar industry has been hardest hit by the pandemic, with stark data from the Bureau of Labor Statistics (BLS) and collated by the National Restaurant Association revealing that a staggering six million US restaurant workers have lost their jobs during the pandemic.