Billie Eilish, 20, and new boyfriend Jesse Rutherford, 31, have been slammed over their ‘disturbing’ baby and old man Halloween costumes.

Seemingly taking aim at critics of their age-gap romance, the singer dressed up a baby, complete with a diaper and bonnet, while Rutherford sported a bald cap and wrinkled prosthetics in photos posted by Pop Crave.

In one snap, which was posted by Billie’s brother Finneas’ partner Ashe, the No Time To Die hitmaker wore doll-like make-up, a blonde wig, and an outfit emblazoned with teddies as she chatted in the street with her beau.

The pair have not posted about their costumes on social media but the ensembles were branded ‘sick and twisted’ by fans. The pair’s 11-year age difference, especially as he may have known her since she was a minor, has recently sparked backlash across social media.

‘It’s not funny or chic, its not poking fun, it’s disturbing, and the adults in her life are letting her down once again.

Another wrote: ‘That Billie eilish costume is extremely disturbing and i absolutely hate it everytime it crosses my timeline’ while a third typed: ‘i wish i could wash my eyes with soap and scrub this from my mind.’

What is that? In the snap, the No Time To Die hitmaker wore doll-like make-up, a blonde wig, and an outfit emblazoned with teddies

Another wrote: ‘I mean they’re trolling the people that are having a unnecessary opinion about their relationship. So In a way ur proving their point and making their joke even funnier.’

DailyMail.com has contacted representatives for Eilish and Rutherford for comment.

Eilish was first linked with Jesse when the two were spotted by a fan at Universal Studios’ Halloween Horror Nights earlier this month.

The creator uploaded a clip of the two walking closely together on TikTok, and added a caption to the post, ‘OMG I just saw Billie Eilish at Horror Nights.’

In the short reel, the stars appeared to be holding hands as The Neighbourhood band member led the singer out of a spooky-themed maze.

Although Jesse’s face wasn’t on display in the video, additional social media posts showed that he was at the park with not only Billie, but also her older brother, Finneas.

In the snap, Jesse was wearing a leather jacket which was similar to the one worn in the now viral TikTok video.

The Grammy winner also uploaded a post of herself posing in a bathroom, also taken at the busy amusement park.

Rumors quickly filtered through the internet, and the two were spotted enjoying a dinner date together at a popular LA restaurant called Crossroads Kitchen, less than two weeks ago.

With her arms draped across his shoulders, Eilish was seen sharing an intimate moment with the singer as they made their way onto the street.

On December 18, 2017 a Jesse Rutherford fan account tweeted pictures of Billie and Jesse playfully posing up at a costume party together.

The tweet, which has resurfaced via TMZ, was originally posted on Billie’s 16th birthday when Jesse was 26 years old. 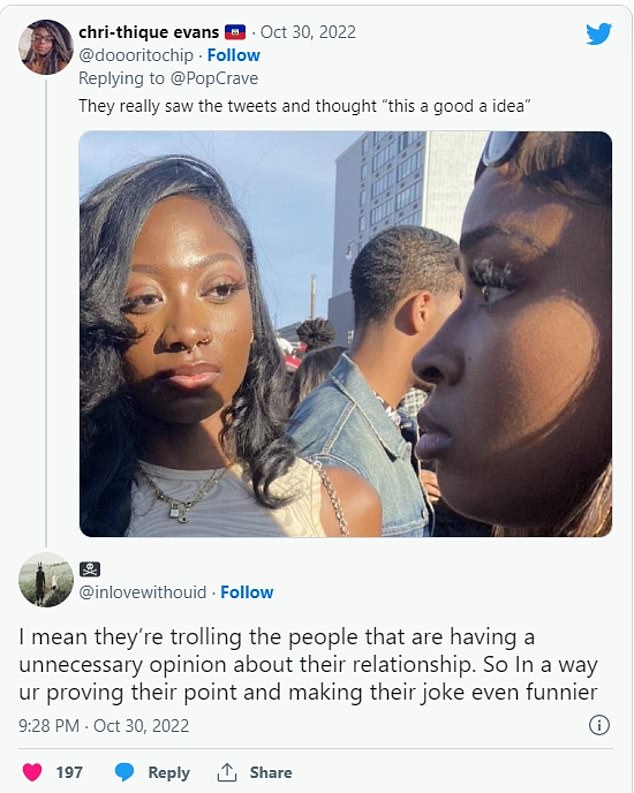 Backlash: The pair have not posted about their costumes on social media but the ensembles were branded ‘sick and twisted’ by fans 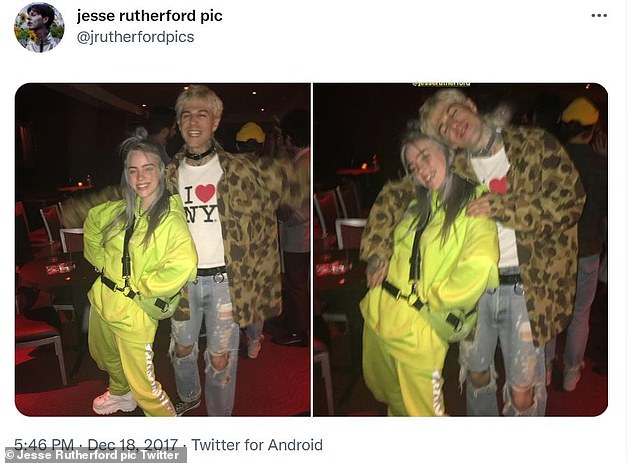 Controversy: On December 18, 2017 a Jesse Rutherford fan account tweeted pictures of Billie and Jesse playfully posing up at a costume party together 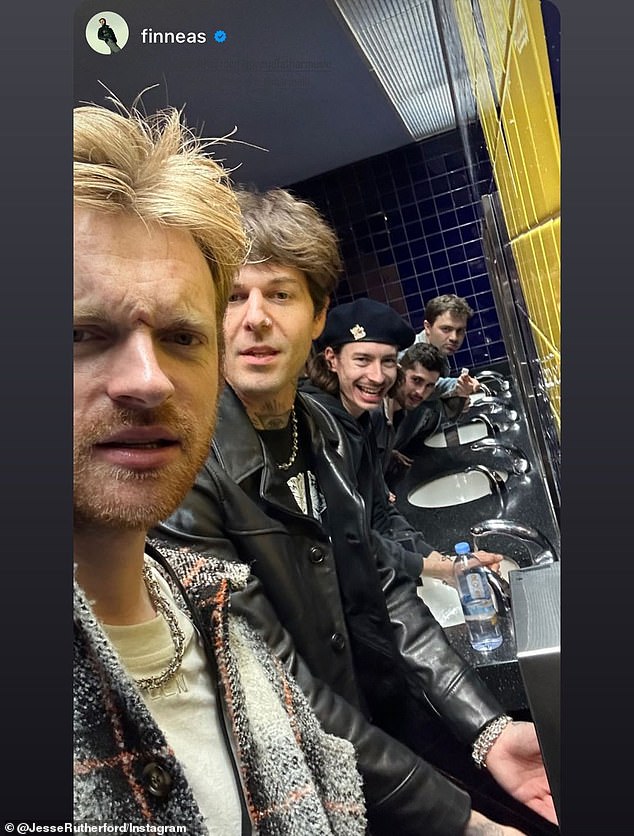 Who’s who: Adding grist to the mill, Jesse (second from left) appeared in an Insta Stories snap from a men’s room at Universal Studios posted by Billie’s brother Finneas, 25 (left) 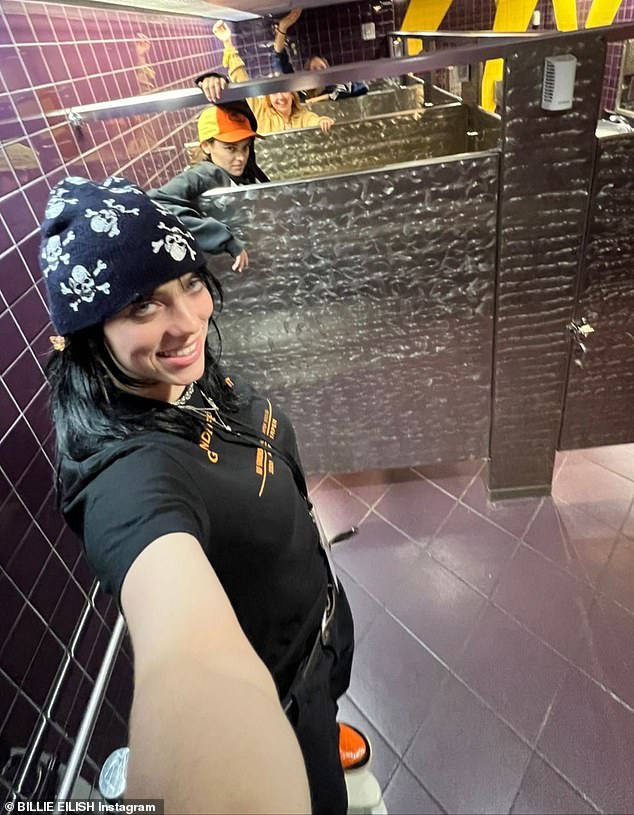 Clues: Billie has posted her own bathroom selfie from Universal Studios, wearing an outfit that also appears to match the fan video

Billie, who has a reputation for being assiduously tight-lipped about her love life, has not addressed the latest conjecture in public and neither has Jesse.

A couple of years ago Billie remarked on Capital Breakfast With Roman Kemp that she ‘definitely’ prefers to ‘keep’ her relationships ‘private.’

She dished: ‘I’ve had relationships and kept them private, and even the ones that I’ve had; with the tiny amount that I’ve let the world see, I regret.’

The No Time To Die singer explained: ‘I think about the people that have made their relationships public, and then they break up, and it’s like: “What if it goes bad?”‘

Meanwhile Jesse, who is best known as the frontman for The Neighbourhood, previously dated a model called Devon Lee Carson.

They became an item in 2015, but by November of last year reports began to circulate that they had brought the curtain down on their romance. 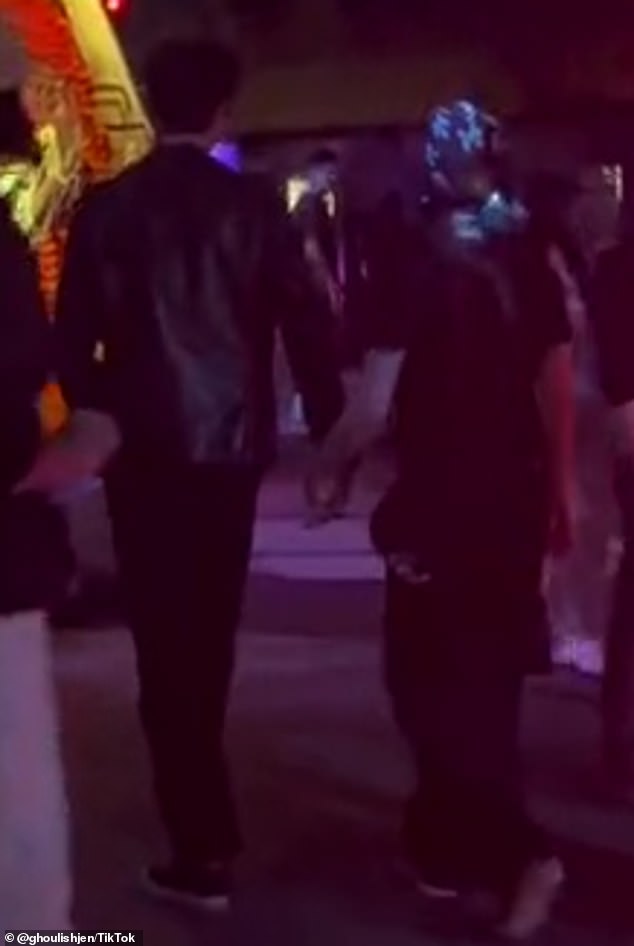 Speculation: Earlier this month, a fan posted a social media video of two people, who appeared to be Billie and Jesse, seeming to hold hands at Universal Studios Hollywood