The billionaire ruler of Dubai has admitted defeat in a planning row with neighbours as he submits more modest plans for his Scottish estate – amid a bitter divorce battle with his youngest wife.

Sheikh Mohammed bin Rashid al-Maktoum, 70, dropped the scheme to expand Inverinate Estate in the Scottish Highlands earlier this month while reports flooded in that his wife fled Dubai and is hiding in London with their children.

The sheikh had last year lodged plans for a two storey, nine-bedroom building designed to accommodate family and friends at his home in Wester Ross.

However it led to 16 objections being made to Highland Council by residents who said it was too close to a neighbouring bungalow and would spoil the natural beauty of the area at Loch Duich – with one calling it a ‘monstrosity’.

Sheikh Mohammed bin Rashid al-Maktoum (left), 70, dropped the scheme to expand Inverinate Estate in the Scottish Highlands earlier this month while reports flooded in that his Princess Haya bint al-Hussein (right), 45, fled Dubai and is hiding in London with their children 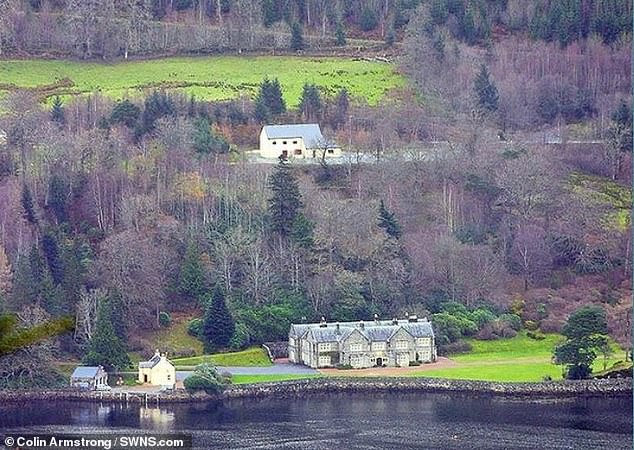 The sheikh had last year lodged plans for a two storey, nine-bedroom building designed to accommodate family and friends at his home in Wester Ross (the estate is pictured)

He has now returned with a new proposal to build the lodge on the 63,000-acre estate. It will contain six bedrooms instead of the nine he originally intended

However, the sheikh has now returned with a new proposal to build the lodge on the 63,000-acre estate. Architects working for him have reduced the size of the proposed building and said it will have six bedrooms rather than nine.

They also said no windows will now overlook the bungalow and trees will be retained to provide screening between the two properties.

The sheikh’s planning agents – Smech Properties Ltd – say his family’s trips to the area have been ‘limited by lack of accommodation’.

The Highland retreat already boasts helipads and a 14-bedroom holiday home, next door to a 16-bedroom luxury hunting lodge with pool and gym.

Earlier this year he was also granted permission to build a 19 bedroom lodge as well as a nine-bedroom house at the estate.

The revised application for the lodge, to be called Ptarmigan, states: ‘Given the close proximity of the residential property to the west, the proposed lodge has been carefully sited a significant distance away from this property, and specifically designed to ensure there are no windows overlooking to the east in order to avoid any potential adverse neighbour amenity issues.

‘The applicant would have no issue to the imposition of planning conditions regarding tree protection measures during the construction phase and the need for additional tree planting if considered appropriate/necessary.’ 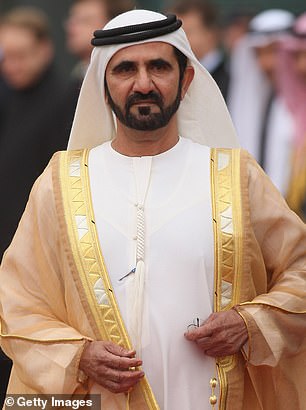 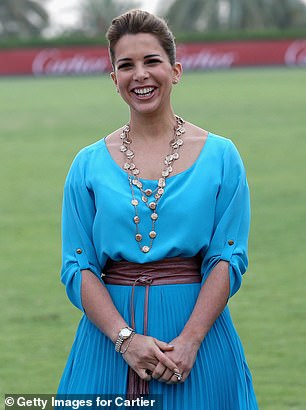 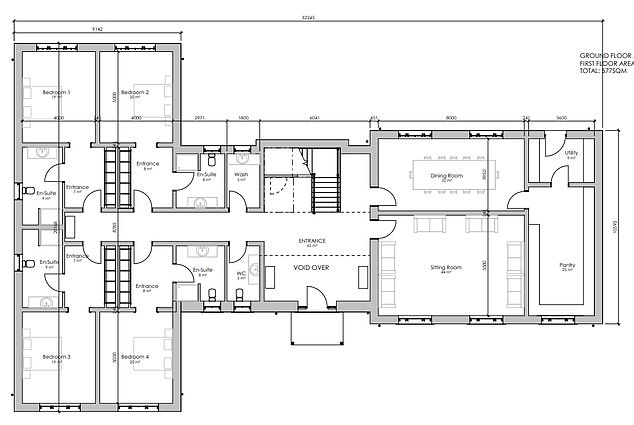 Architects working for him have reduced the size of the proposed building and said it will have six bedrooms rather than nine (pictured, a ground floor plan) 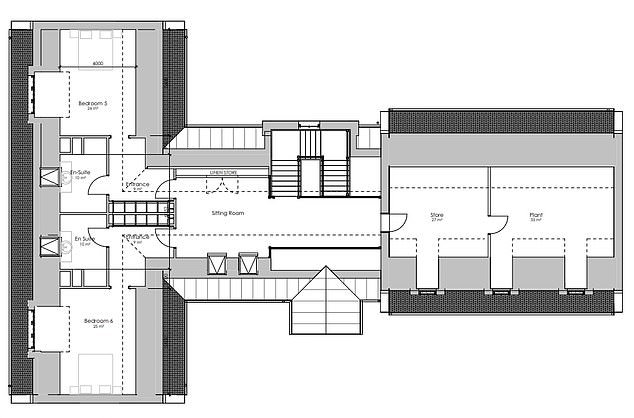 The local authority is due to make a decision on the sheikh’s application in September and locals have been given until August 10 to lodge objections.

The planning battle comes in the wake of revelations about the private life of the 70-year-old sheikh, who has six wives and 23 children.

His youngest wife Princess Haya bint al-Hussein, 45, is said to be with her children in a London mansion after fleeing Dubai. He and Princess Haya have two children aged seven and 11 and their divorce is likely to be one of the most expensive in UK legal history.

Her husband, one of the world’s richest men and Prime Minister of the United Arab Emirates, has launched a legal action against her, thought to be related to custody over their children. A hearing in the case is set for the High Court in London on July 30.

A supporting statement accompanying the sheikh’s latest bid to expand his Highland estate said the proposed new lodge is ‘sympathetic to the existing pattern of development that prevails in the area.’

Addressing concerns over increased traffic, the sheikh’s representatives wrote: ‘The proposed lodges are for the sole, exclusive use of the current land owner and guests. They will not be rented out for tourist use. As with the current lodges, occupation is infrequent. They are not occupied for large periods of the year.’

With multiple wives, 23 children, numerous relatives and a large entourage of bodyguards and servants, Transport Scotland had been concerned over the wear and tear to the local road caused by the sheikh’s future trips to his Highland hideaway.

It wanted the sheikh to detail how often he and his regal retinue are planning to head north and what the ‘cumulative traffic impact’ will be.

But the sheikh’s agents say: ‘It is anticipated that there will be no significant increase in car movements above the existing traffic flow following completion of the construction phase. As with the current lodges, the majority of visits to the property are by either coach or helicopter, supported by a fleet of six 4×4 cars for shooting parties/visits.

‘There is no recorded data available on frequency of visits or length of duration.’ 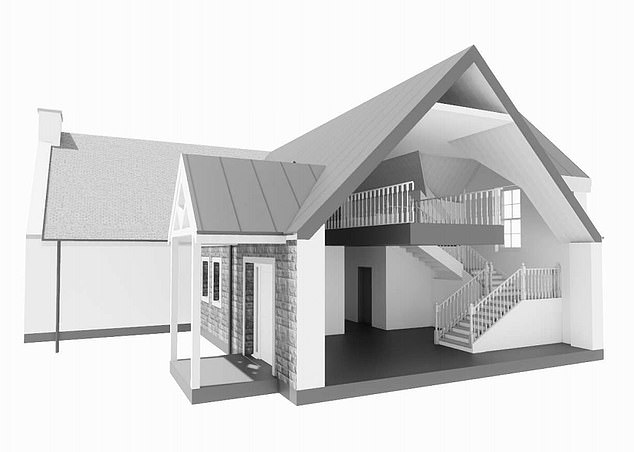 The original scheme angered a number of local people. But the new plan (pictured, a 3D design) is smaller, containing only six bedrooms 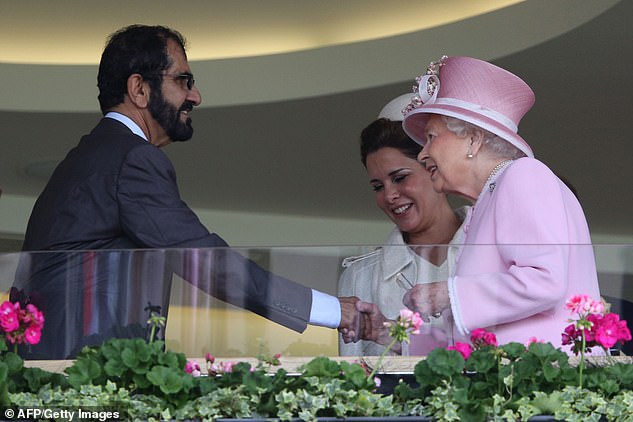 The original scheme angered a number of local people including bungalow owner Roddy Macleod, 70, whose home of 35 years sits just 20 metres from the proposed lodge.

He said: ‘It’s a monstrosity that’s going to spoil the area completely and it will certainly kick the hell out of my house.

‘He’s got so much land he could build a house anywhere but instead he’s decided to build right on top of my place.

‘It’s very tall with 18 windows looking into my house, so my privacy is gone and it will block out the sunlight. This is a place of scenic beauty, right on the shores of Loch Duich and I had a lovely peaceful house until they built the addition to the existing lodge with a swimming pool.

‘They call the new building ‘a lodge’ too, but it’s an apartment block, which would be fine in a city but not out here. The noise pollution from the construction has been terrible.’

The local community council also objected to the plans while other residents said the proposed building was ‘ugly’ and would spoil the natural beauty of the area.

The sheikh, who has a fortune in excess of £9billion and founded the Godolphin horse racing stable, bought the estate more than 20 years ago. His family visit every summer to escape the 50C Dubai heat.

He has also faced criticism over the treatment of his daughter Princess Latifa, 33, who fled Dubai last year but was captured and reportedly imprisoned in Dubai.