Billy Bragg: Jews have ‘work to do’ to rebuild trust with Labour

Comedian Billy Bragg has claimed Jews have ‘work to do’ to rebuild trust with Labour as a row over anti-Semitism spirals to angry new heights.

The left-wing ally of Jeremy Corbyn said the decision of three Jewish newspapers to run a joint front page saying they were ‘united’ against Labour anti-Semitism was ‘pouring petrol on the fire’ of the row.

Labour is accused of letting critics of Israel be anti-Semitic and Britain’s three main Jewish newspapers all claim the party represents an ‘existential threat’ to the community. 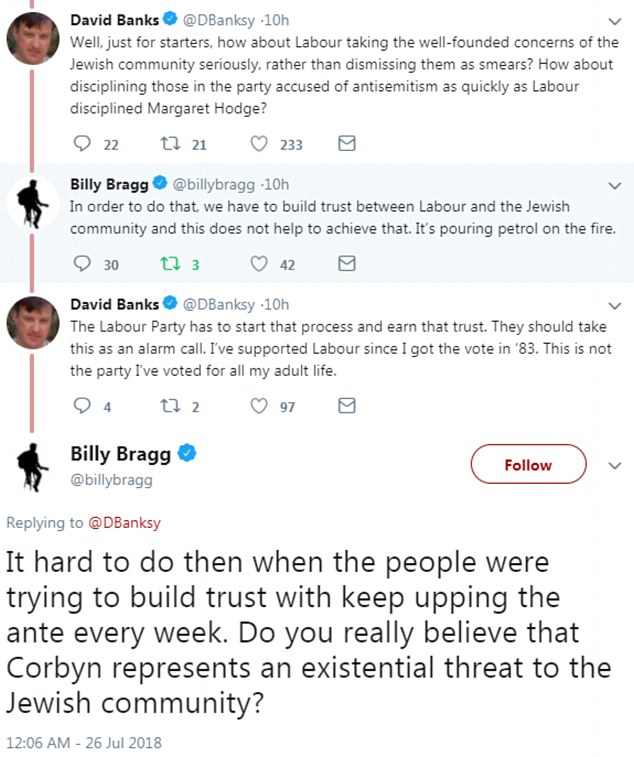 Challenged on his views, Bragg claimed the newspapers were ‘pouring petrol on the fire’ of the anti-Semitism row 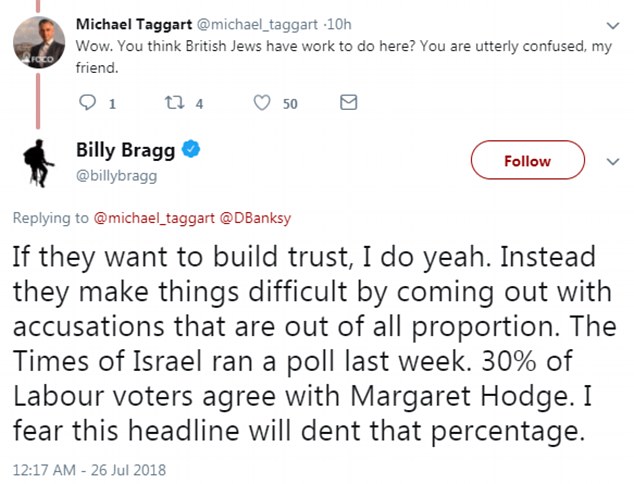 The row blew up again after Jewish Labour MP Dame Margaret Hodge was warned to face disciplinary action for calling Mr Corbyn an anti-Semitie during a row in Parliament.

Mr Bragg lashed out at the Jewish News, Jewish Chronicle and Jewish Telegraph on Twitter late last night, claiming the joint action made it impossible to debate anti-Semitism.

He said: ‘Austria is forcing Jews to register, the Alt-Right are chanting ”Jews will not replace us” but Labour pose an ”existential threat” to British Jews?

‘How are we supposed to conduct a reasoned debate about anti-semitism in such a febrile atmosphere?’

Mr Bragg insisted he accepted anti-Semitism was a problem but challenged on whether Labour was taking the concern seriously, he said: ‘In order to do that, we have to build trust between Labour and the Jewish community and this does not help to achieve that.

Why does the Labour document trigger new controversy?

But it has sparked further controversy, as it omits four behaviours identified as anti-Semitic by the IHRA, including:

‘It’s pouring petrol on the fire.’

Asked if he meant Jews had work to do, the comic blasted: ‘If they want to build trust, I do yeah. Instead they make things difficult by coming out with accusations that are out of all proportion.

‘The Times of Israel ran a poll last week. 30% of Labour voters agree with Margaret Hodge. I fear this headline will dent that percentage.’

The Jewish News, Jewish Chronicle and Jewish Telegraph today published a joint front page editorial voicing fears that power could be handed to a man who has ‘contempt for Jews andIsrael’.

It highlighted how the ‘stain and shame of anti-Semitism’ had flourished in the Labour Party since Mr Corbyn became leader in 2015.

And they singled out Labour’s ‘sinister’ failure to adopt the internationally-accepted definition of anti-Semitism in its new code of conduct.

The decision has fuelled concerns that the watered-down definition means activists could avoid being punished for making slurs such as comparing the actions of Israel to those of the Nazis. 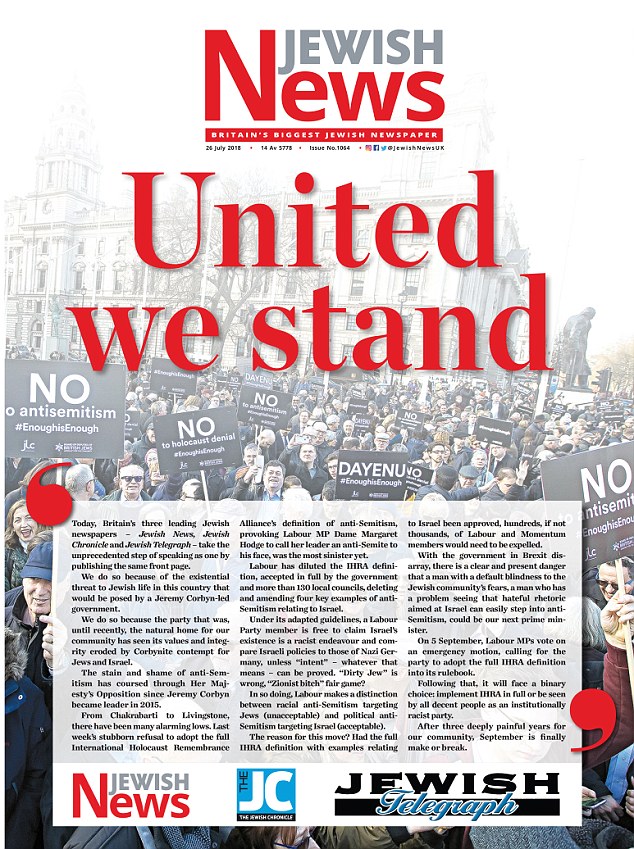 Underneath the headline United We Stand, the papers condemned Mr Corbyn for having a ‘default blindness’ to the fears of the Jewish community. They said they had teamed up because of the ‘existential threat to Jewish life in this country that would be posed by a Jeremy Corbyn-led government’.

The article was written over a photograph of placard-waving campaigners against Labour anti-Semitism and Holocaust denial in March.

It said there had been ‘many alarming lows’ of anti-Semitism in Labour.

These included human rights campaigner Shami Chakrabarti being handed a peerage weeks after publishing a report that allegedly whitewashed anti-Semitism in the party.

The article also condemned Labour for reinstating Ken Livingstone after he had been suspended for claiming Hitler had once supported Zionism.

But it said the ‘stubborn refusal’ to accept the International Holocaust Remembrance Alliance’s definition of anti-Semitism – which saw Labour MP Dame Margaret Hodge, who lost family in the Holocaust, to brand Mr Corbyn a ‘racist’ – as the ‘most sinister yet’.

The definition is recognised internationally and has been accepted by the Government and 130 councils. 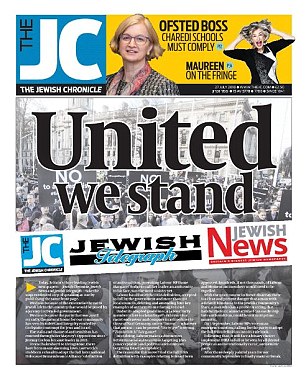 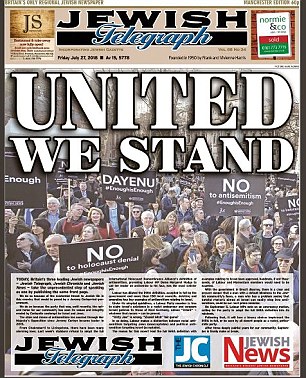 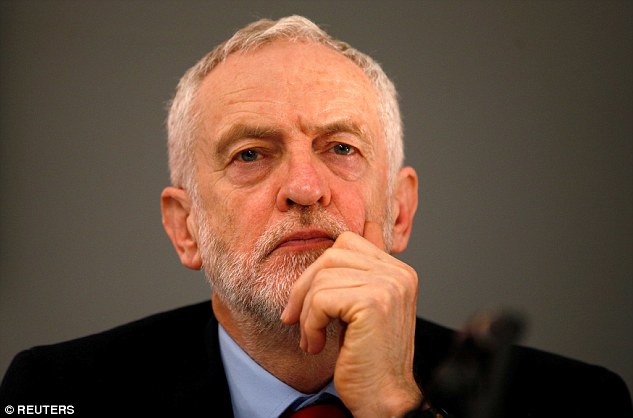 But Labour left out four key examples of anti-Semitism relating to Israel. This was a cynical attempt to avoid the need to expel ‘hundreds, if not thousands’ of Labour and Momentum members, said the newspapers.

The article added that if Labour failed to implement the definition in full it would be seen ‘by all decent people as an institutionally racist party’.

Labour has been engulfed in claims of anti-Semitism under Mr Corbyn’s leadership following a spate of attacks on Jewish people and supporters, including Labour MPs.

At last year’s party conference a fringe event speaker said people should be able to question whether the Holocaust took place.

Prior to her confrontation with Mr Corbyn last week, in March Dame Margaret branded him ‘the poster boy of anti-Semites everywhere’.

Last night, Gideon Falter, chairman of the Campaign Against Anti-Semitism, said: ‘We hear from members of our community constantly that were Jeremy Corbyn to become prime minister, they would take the drastic step of leaving the country.

THEIR DEVASTATING VERDICT IN FULL

We do so because of the existential threat to Jewish life in this country that would be posed by a Jeremy Corbyn-led government.

We do so because the party that was, until recently, the natural home for our community has seen its values and integrity eroded by Corbynite contempt for Jews and Israel.

The stain and shame of anti-Semitism has coursed through Her Majesty’s Opposition since Jeremy Corbyn became leader in 2015.

From Chakrabarti to Livingstone, there have been many alarming lows. Last week’s stubborn refusal to adopt the full International Holocaust Remembrance Alliance’s definition of anti-Semitism, provoking Labour MP Dame Margaret Hodge to call her leader an anti-Semite to his face, was the most sinister yet.

Labour has diluted the IHRA definition, accepted in full by the government and more than 130 local councils, deleting and amending four key examples of anti-Semitism relating to Israel.

Under its adapted guidelines, a Labour Party member is free to claim Israel’s existence is a racist endeavour and compare Israeli policies to those of Nazi Germany, unless ‘intent’ – whatever that means – can be proved.

The reason for this move? Had the full IHRA definition with examples relating to Israel been approved, hundreds, if not thousands, of Labour and Momentum members would need to be expelled.

With the government in Brexit disarray, there is a clear and present danger that a man with a default blindness to the Jewish community’s fears, a man who has a problem seeing that hateful rhetoric aimed at Israel can easily step into anti- Semitism, could be our next prime minister.

On 5 September, Labour MPs vote on an emergency motion, calling for the party to adopt the full IHRA definition into its rulebook.

Following that, it will face a binary choice: implement IHRA in full or be seen by all decent people as an institutionally racist party.

After three deeply painful years for our community, September is finally make or break.

In January, the Community Security Trust, a charity that monitors anti-Semitic abuse, said it recorded 1,382 hate crimes last year – 3 per cent more than in 2016.

It was the highest figure since records began 34 years ago. It said the increase followed ‘unprecedented publicity’ about controversies involving Labour.

Last night Labour MP Wes Streeting said of the editorial: ‘This is a shameful episode in the history of the Labour Party and we need to put it right.’

The Labour Party said: ‘Jeremy Corbyn and the Labour Party are fully committed to the support, defence and celebration of the Jewish community and its organisations. The next Labour government poses no threat of any kind whatsoever to Jewish people. The security and wellbeing of Jewish people is a priority for our party.

‘We understand the strong concerns raised in the Jewish community and are seeking to engage with communal organisations to build trust and confidence in our party.’