Billy Connolly reveals his eldest son, 50, is battling addiction to drink and drugs

Sir Billy Connolly has revealed that his eldest son has been battling a drug and alcohol addiction.

The Scottish comedian, known affectionately as The Big Yin, spoke about how his 50-year-old son Jamie had a ‘problem’ during the latest episode of his ITV travel series Billy Connolly’s Great American Trail.

Sir Billy said that Jamie, who is from his first marriage to Iris Pressagh, had been to Alcoholics Anonymous (AA) and Narcotics Anonymous (NA) meetings to get help.

Sir Billy Connolly revealed that his eldest son had been battling a drug and alcohol addiction. He spoke during an episode of his travel show when he was visiting the Southern West Virginia Fellowship Home that supports recovering addicts

The 76-year-old, who is suffering from Parkinson’s disease, also hit out at the lack of understanding and compassion shown towards those with addiction problems.

Connolly said: ‘My son has a problem and he’s in AA and NA.

‘He told me when he went to the detox place some kids were being let out and they were back on the stuff before they got to the railway station. It’s so powerful.

‘People who don’t know about it say “why do they take it, just say no”. 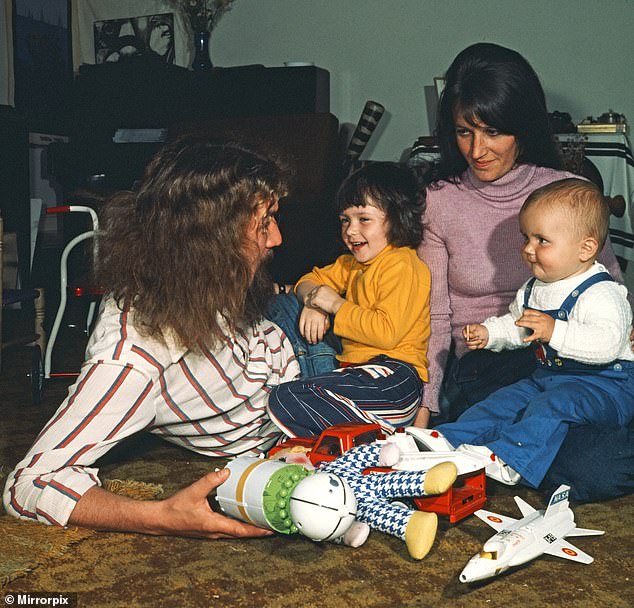 During his first marriage was to Iris Pressagh, the couple had two children, Jamie (in yellow) and Cara. Sir Billy said that Jamie had recently turned to Alcoholics Anonymous (AA) and Narcotics Anonymous (NA) for help

Addressing workers and those getting treatment at the Southern West Virginia Fellowship Home, he added: ‘You do grand work.

‘Anytime they speak about this stuff they talk about it like people are losers and they are dying all over the place.

‘They never talk about this, about people pulling themselves up and getting on with it.’

The majority of people at the therapy centre were being treated for addiction to powerful opioid painkillers.

Connolly told viewers that 90,000 people in America had died due to opioid addiction in the last two years. 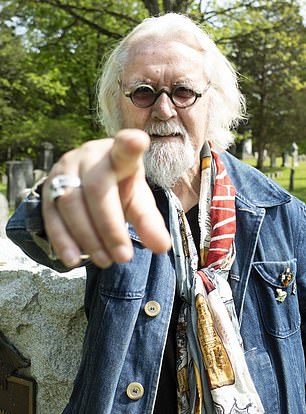 He said: ‘Make no mistake, this is a middle and working class crisis. The scale of addiction is industrial.

‘There are now over a million and a half Americans addicted to medical and illegal opioids.

‘The numbers are terrifying. It’s a national tragedy.’

Sir Billy, who gave up drinking 35 years ago, said he had smoked cannabis but had no experience of harder drugs.

He said: ‘I know nothing about the whole drug thing. I’ve smoked a little dope but I’ve never been deeply involved in it.’

He had previously spoken of his love of going on fishing trips with Jamie who worked in a theatre prop departments.

The final part of his travelogue also saw Connolly return to the stage to play his beloved banjo.

Connolly’s first wife, Iris Pressagh, suffered from alcoholism and died in 2010 at the age of 67. 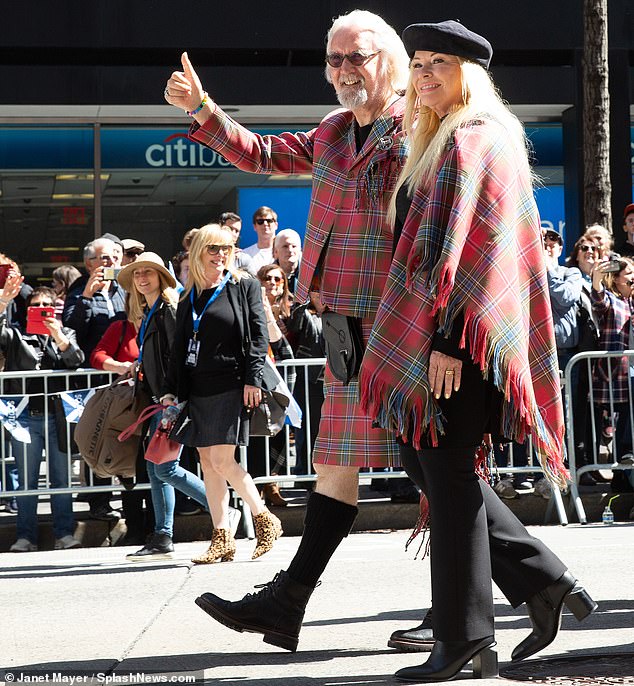 She was an interior designer and was introduced to shipyard welder Billy — then a struggling folk musician playing Glasgow pubs — by his banjo teacher.

After a raging argument Iris fled to France, leading Billy to write a letter telling her to come home.

She then hitchhiked back to Glasgow and the pair got married at a register office in 1969.

She was a reclusive alcoholic and her and Connolly were married for 16 years before divorcing in 1985.

Connolly performed country music classic ‘Will the Circle Be Unbroken’ at the famous Grand Ole Opry in Nashville, Tennessee.

He announced his retirement from live performance last year after his condition had affected his movement on stage.

Connolly was diagnosed with Parkinson’s seven years ago after a doctor spotted him walking strangely through the lobby of a hotel in Los Angeles.

He moved from New York to Florida as his doctors had advised him to live in a warmer climate.

A film of the comic’s final stand-up tour is being shown for one night only in cinemas on October 10.

Connolly met his current wife Pamela Stephenson when she was a star on the BBC comedy Not The Nine O’Clock News. The pair were married in 1989.

Speaking about his relationship with Pamela, a clinical psychologist, Connolly said: ‘Iris was a very nice woman but this was, from the outset, a different relationship.

Stephenson wrote a book which revealed that Iris Pressagh suffered from a serious hoarding disorder.

According to the Sun, she wrote: ‘I felt very sorry she had struggled so much without receiving the kind of psychological treatment that might have helped her.’