At around 8am on Monday, there was a knock on Billy Gilmour’s bedroom door that would feel like he had woken to a nightmare.

Scotland’s team doctor stood in the corridor, there to inform the young midfielder he had Covid-19, ruling him out of Tuesday night’s game against Croatia, as well as any potential second-round tie.

They say football is a game of highs and lows, but in the space of just 60 hours, Gilmour has touched the extremes of that emotional spectrum. 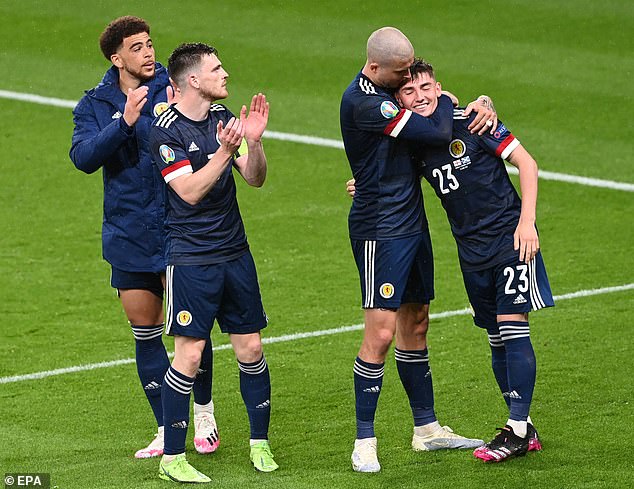 Man-of-the-match on his first Scotland start against England on Friday and lauded by every observer from London to Lanarkshire, Gilmour was back-page news.

Sadly, that is where the 20-year-old remains, his positive test providing the most almighty negative for the player and his nation.

From a mother’s tears of joy inside Wembley to her son’s tears of heartache inside his hotel room in Darlington, this has been one hell of a weekend for the Gilmour family.

But the pain will be felt far beyond their inner circle. Gilmour had given his countrymen hope with his performance during the goalless draw with England.

Hope that, for the first time in their history, Scotland were about to make it beyond the group stage of a major tournament.

That is still possible, of course, with victory over Croatia at Hampden Park. But some air has certainly escaped their balloon. 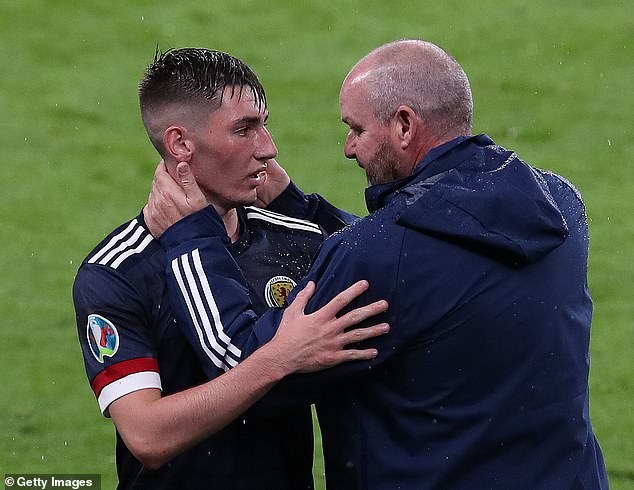 It could have been worse – it could have burst entirely had the remainder of the squad not tested negative on Monday and, somehow, avoided being deemed ‘close contacts’ of Gilmour.

Steve Clarke never looks too comfortable in front of the media. But he looked like he had a swab up his nose as he faced questions on the subject of Gilmour and Covid-19.

When asked how their bubble had been breached, Clarke said: ‘Not my department. My job is to prepare the team for the game. The medical team I have got are good people. They deal with that side of the issue.’

Again, given Andy Robertson and John McGinn played table tennis with Gilmour on Sunday night, was he worried about close contacts?

‘It is not my department,’ said Clarke. ‘My department is getting the team ready for an absolutely massive game. That is what I have been concentrating on.’

Clarke himself was pictured hugging Gilmour at Wembley – as well he might after his bold selection paid off – but, unlike England’s isolating pair of Ben Chilwell and Mason Mount, the Scotland boss has not been advised to take such precautions.

But while Clarke’s answers amid the search for more information felt a little unsatisfactory and straight out of Boris Johnson’s diversionary playbook, he was also right in that he cannot lose sight of what is in front of him.

‘Listen, this is a big game, so let’s not lose focus on where we are and what we’ve done to get here, including the point we got at Wembley,’ said Clarke.

‘What we have to do now is make sure that Billy’s good performance against England doesn’t go to waste. ‘The players don’t need any added motivation, but this is a very tight-knit group. They know if we can progress far enough into the tournament, then they can welcome Billy back into the squad. That would be fantastic.

‘But the first step to doing that is to make sure we go out and play as well as we can.’

And Scotland can play well without Gilmour. Goodness, they have been doing so for the past year and beyond under Clarke.

In many ways, news of his absence was better breaking on Monday than an hour before kick-off, as was the case when Kieran Tierney missed their opening defeat to Czech Republic. His late loss had a deflating effect inside Hampden.

But Tierney was back at Wembley, as was the recalled striker Che Adams – mystifyingly left out against the Czechs – and what a difference they made.

Clarke got his team and tactics spot on against England. So what is his head telling him now? 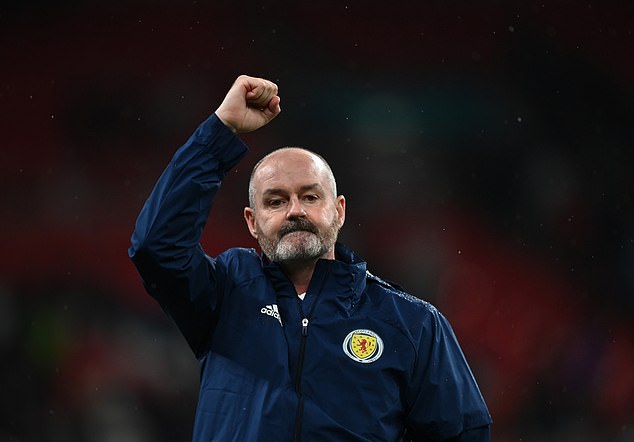 ‘It’s telling me what it always tells me when a press guy asks me to name my team: F*** off!’ he bit back, albeit with a smile.

Indeed, when Clarke was told of Gilmour’s infection at 6.50am, he no doubt dispensed with a similar retort.

For it is the cruellest of blows to the canniest of players, an unassuming young man whom the nation has taken to its hearts – and boy can he play.

But unhappy Gilmour will be watching on TV from his hotel room on Tuesday night.

Should his team-mates win then he may well be getting another bang on his door when they return in the small hours – and how welcome that would be, for Gilmour’s tournament may not yet be over.