The grandson of evangelist Billy Graham has launched a new church four years after he was forced to quit as a pastor when he had an extra marital affair.

That’s the name he’s given to his new faith community, his latest venture following his resignation from the Coral Ridge Presbyterian Church in Northern Fort Lauderdale in 2015.

Now in a new marriage, the 47-year-old has found forgiveness and a second chance among the 60 to 80 people who attend his services at the Hilton.

‘Some people think that I should just shut up and crawl in a cave and never come out because I’m not qualified to be leading spiritually in any way because of everything that I went through and everything that I did,’ he told the Palm Beach Post about his return.

Christian Evangelist Billy Graham’s grandson, Tullian Tchividjian (above), preaching at ‘The Sanctuary’ his first ministry after an extra-marital affair forced him to resign from the Coral Ridge Presbyterian Church in Northern Fort Lauderdale in 2015 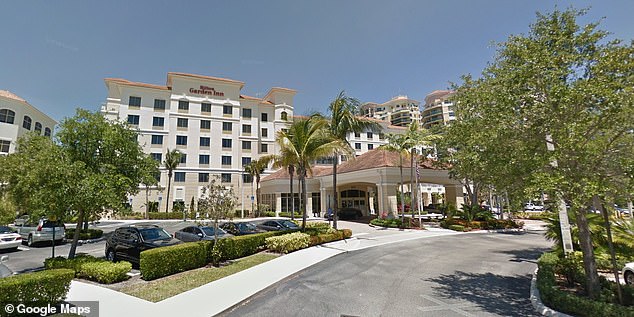 The Hilton Garden Inn (above) is the temporary home of ‘The Sanctuary,’ a non-affiliated church started by Christian Evangelist Billy Graham’s grandson, TullianTchividjian 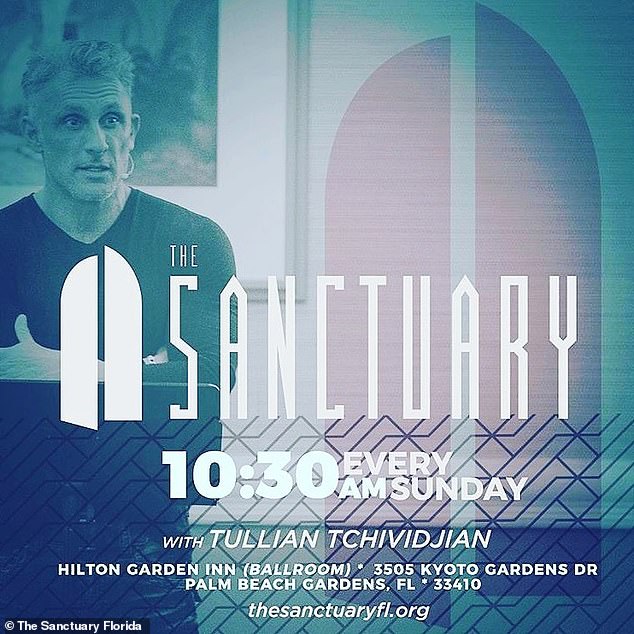 Services at ‘The Sanctuary’ are being held inside the ballroom of the Hilton Garden Inn in Palm Beach Gardens, Florida, according to a notice (above) posted on the church’s Facebook page 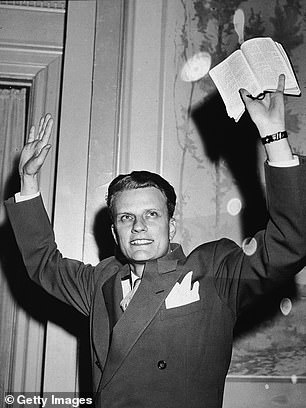 Tchividjian is the grandson of Christian Evangelist Billy Graham, who died in 2018 of natural causes at the age of 99

‘Other people champion it because they go, ‘It’s about time that churches are led by people who know what it feels like to, you know, fall on their face and be in the gutter’.’

The Hilton is just temporary until the Sanctuary finds a permanent home in town. Services, for the moment, are being held in one of the hotel’s ballrooms.

Vickie Diamond, who attends the Sanctuary, gave a higher-authority credit for helping Tchividjian put his past behind him.

“God has done amazing work in his life,” Diamond said.

Another congregant told DailyMail.com that she had no complaints.

“I’ve heard three of his sermons and I go back as much as I can,’ she said, asking that her name not be used. Tchividjian did not immediately respond when DailyMail.com reached out.

Tchividjian, a muscular t-shirt wearing man who sports tattoos is far cry from his Christian Evangelist grandfather, who was known for wearing suits.

Tchividjian is the son of Gigi Tchividjian, his grandfather’s eldest daughter. Graham died in 2018 of natural causes at the age of 99.

In addition to preaching, Tchividjian has authored several books on Christianity.

His fall from grace came after an affair with Rachel Steele, then a member of Coral Ridge, forced him to leave the church. He was also defrocked by the South Florida Presbytery.

Tchividjian, speaking through a spokesperson, told the Post that his ‘infidelity in 2015 was completely wrong, morally and ethically’ and that there was no abuse.

Steele, however, accused him of abusing his power as a minister – as did the group Godly Response to Abuse in the Christian Environment, or GRACE, which is led by Tchividjian’s brother.

A statement posted by GRACE on its website accuses Tchividjian of ‘clergy sexual misconduct against multiple women.’

The preacher admits now that there was a second affair that happened while he was on a leave of absence from Coral Ridge and after he separated from his wife, Kim.

The couple divorced in 2015. Tchividjian a year later tied the knot with his current wife, Stacie. 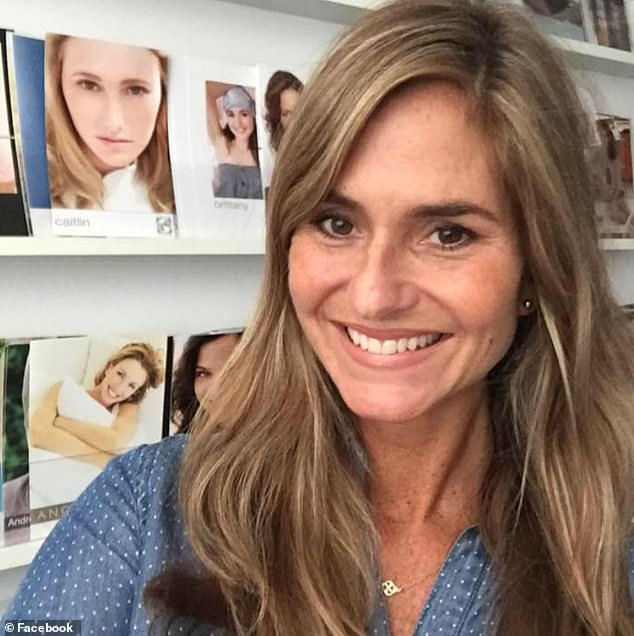 The preacher admits now that there was a second affair that happened while he was on a leave of absence from Coral Ridge and after he separated from his wife, Kim (above). The couple divorced in 2015 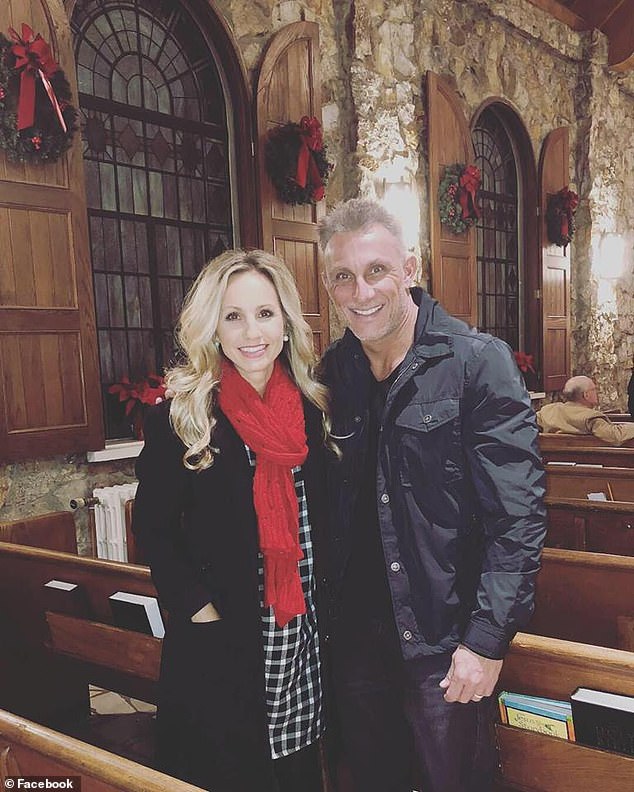 Tchividjian tied the knot with his current wife, Stacie (above) in 2016

Following their nuptials, Tchividjian and his new bride, Stacie (both pictured above) moved to North Texas where the preacher says he spent a year of ‘mental and emotional detox and rehab.’ He told the Post that God was ‘deconstructing me to the core’

Following their nuptials, the couple moved to North Texas where Tchividjian says he spent a year of ‘mental and emotional detox and rehab.’ He told the Post that God was ‘deconstructing me to the core.’

It was a ‘very, very, very painful, but necessary’ time in his life, Tchividjian said

After returning to Florida in late August 2017, Tchividjian started writing again and speaking to the faithful, weaving his personal experiences to an interested crowd of followers.

He said he came to realize there was a growing need for a new kind of church, one that was a ‘safe place for broken people to break down and for fallen people to fall down.’

“The church ought to be a sanctuary,” Tchividjian said, hinting at how he came up with the name of his new, unaffiliated church.

Steele said she was sickened and angered to learn Tchividjian was back in charge of a new house of worship. She did not immediately respond when DailyMail.com reached out to her.

She recalled they had sex a few times, and that she didn’t consider it consensual, saying it was more a surrendering ‘to what he wanted.’

Steele claimed Tchividjian months before had baptized her kids and even given her and her then-husband marriage advice. She called it counseling, a role in her life which the preacher has denied.

“He was my spiritual leader. You know, he was my go-to. He was my teacher. … He definitely had a place of authority in my life,” Steele told the Post. “You trust a man like that a lot more.”