Bindi Irwin has suddenly stepped down as the youth ambassador for a lobbying group that argues for a smaller population through the curbing of immigration, after six years in the role.

Ms Irwin, who has an immigrant mother and an immigrant fiance, was given the role in 2013 after writing an essay for Hillary Clinton where she described the growing population as ‘the elephant in the room’.

‘I believe that most problems in the world today, such as climate change, stem from one immense problem which seems to be the ‘elephant in the room’ that no-one wants to talk about,’ she wrote.

That year, she was also interviewed for documentary Surviving Earth, where she praised entrepreneur Dick Smith, suggested young girls in developing countries should be offered a seven-year birth control implant and spoke passionately about controlling the population.

‘It’s all well and good to think someday someone will solve the problem, but that one day has to come soon.’

Ms Irwin also said there ‘has to be a cut off point’ when it came to population growth, and predicted future wars over basic resources including water and space if the numbers continued to grow.

‘At some point, there are too many people on earth,’ she said.

A spokesman for Sustainable Population Australia told Daily Mail Australia on Wednesday the not-for-profit believes the nation needs to substantially decrease the amount of economic migrants, who come from peaceful and developed countries, but had no issue with the current humanitarian intake.

Ms Irwin is engaged to Florida-born Chandler Powell, who she met in the same year she became an ambassador for the group.

He moved to Australia to be with her in 2018, and the couple became engaged earlier this year.

Now living together in Queensland, the couple will marry next year at Australia Zoo – a major tourist attraction.

Her mother Terri was born in Oregon in the United States. She met Steve Irwin in 1991, and the couple were married in the US the next year, before returning to Australia to live. 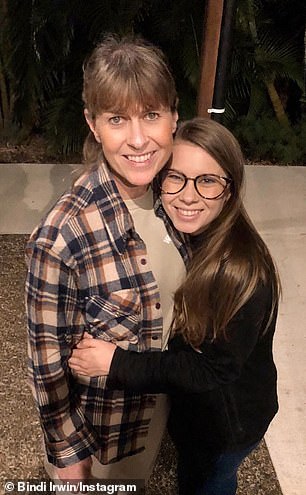 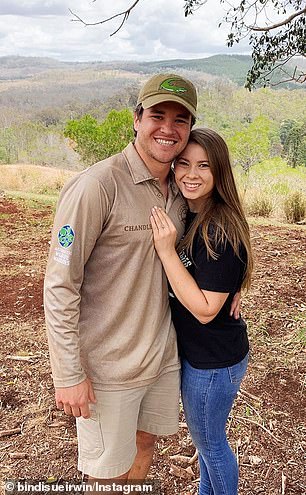 Sustainable Population Australia looks to see a decrease in ‘economic migrants’ but not in Australia’s humanitarian intake. Ms Irwin’s mother and fiance are  both from the United States

Despite her resignation on Tuesday, Ms Irwin was still listed as an ambassador on the SPA website on Wednesday morning

On its website, the group says immigration should be no higher than the number of Australians who emigrate overseas every year, with a higher priority given to refugees or those escaping the effects of climate change.

In a letter of recommendations to the Federal Government dated November 2005, the group further suggests Australia ‘take steps to reduce our national economic dependence on tourism, recognising its vulnerability to rises in the world price of oil and the pollution caused by air and road travel’.

A spokesman confirmed this remained the view of the group.

In a discussion paper released this month, which lists Ms Irwin as the Youth Ambassador, the group argues the country should reduce immigration as a matter of urgency.

‘The fundamental driver of growth in Australia’s population is the level of immigration. This is something that is within the direct control of Australian governments, not a fact of nature,’ the paper read.

‘To end population growth and help solve the infrastructure problem, Australians must demand of their elected representatives a major reduction in immigration, at least back to the long-term 20th century average net overseas migration of 50-70,000 per year.’ 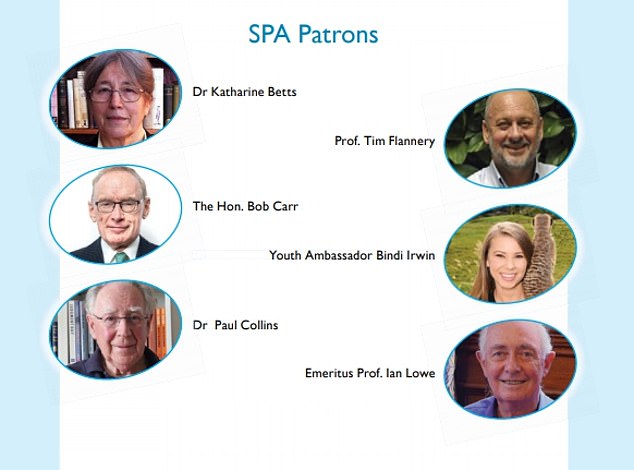 The spokesman confirmed Ms Irwin had tendered her resignation on Tuesday, through an email from Australia Zoo, which said she was ‘retiring and no longer wanted to be mentioned’.

The email cited a ‘conflict in capacities’ for Ms Irwin, who had a figurehead position with Sustainable Population Australia.

‘We were able to use her quotes, her face was in our promotional material,’ the spokesman said.

‘I guess part of the reason [she signed up as ambassador] was because she made a speech in the US about population numbers, and her family have been quite vocal about human numbers and other human impacts for quite some time.’

A spokesperson Australia Zoo told Daily Mail Australia: ‘Bindi is no longer the Youth Ambassador for that organisation’, but had not responded to further questions before publication.

The news comes as former Prime Minister Kevin Rudd advocated for a ‘big and bold’ immigration program to help national security on Tuesday.

While launching an essay on the ‘China challenge’ by journalist Peter Hartcher on Tuesday, he said the country needed to become ‘big and sustainable’ in order to ‘stand on our own two feet’.

‘Only a country, in my judgment, of a population of 50 million later this century will begin to have the capacity to fund independently the defence and intelligence assets necessary to defend our territorial integrity and maintain our political sovereignty for the long term,’ he said.