Climate change is forcing birds to find new and ‘extraordinary’ ways to survive including using bread to bait fish and dropping mussels on rocks to break the shell.

Researchers from McGill University, Montreal studied data on more than 8,600 bird species to look at changes in their feeding and hunting techniques over time.

They found that the changing climate has caused some notable alterations including evidence of birds using boats and even trains as a hunting platform.

Birds have also been seen opening packets of sugar on cafe terraces in their bid to counter the loss of habitat from global warming and human urban development.

‘We long suspected this relationship between innovation and survival must exist, but now we have been able to verify it quantitatively.

Ducatez and his team analysed data on over 8,600 bird species – including more than 3,800 novel feeding techniques spanning nearly 60 years.

The observations from bird watchers in the UK show significant changes in the behaviour of some of the more successful bird species.

One strand of observations revealed that ‘great egrets have been seen using a piece of bread or insects as fishing bait,’ Ducatez said.

‘This is a fascinating behaviour also occasionally observed in other herons and some gulls,’ the expert in biology discovered from studying the observations.

It is believed they got the idea by watching anglers do similar things by chucking bread into the water, or using maggots or worms on their their hooks to tempt fish.

‘A peregrine falcon even used a train to attack birds as they were flushed by its passage through the forest,’ said Ducatez.

‘Another was observed using fishing vessels as platform for hunting petrels at sea, a food source otherwise unavailable.’

The peregrine falcon is the world’s fastest animal, capable of dive bombing at more than 200mph.

Dr Ducatez said: ‘Great cormorants have been watched timing their fishing strategy with the movement of commercial ferries at a wharf.

‘They use the strong currents generated by the propellers to catch confused fish.’

All these examples were captured around Britain, but the phenomenon of altered avian activity stretches to every country.

In Australia blue-faced honeyeaters have been observed opening sugar packets on cafe terraces to then opportunistically take advantage of this new food source.

Bullfinches have been seen doing the same in Barbados and opportunistic carrion crows have also been observed using cars as nut- or seashell-crackers.

‘Corvids, raptors and gulls are among the most innovative birds. A kelp gull has been seen dropping a mussel to break it on hard rocks in New Zealand,’ said Ducatez.

‘Ravens and red kites do the same. Some birds exhibit problem-solving abilities that rival those of a primate.’

The study published in Nature Ecology & Evolution is the first to show the ability to innovate reduces extinction risk on a global scale.

Using a computer model, it also found ‘behavioural plasticity’ was specifically effective in combating habitat alteration but did not protect birds against invasive species or over exploitation.

Ducatez and his team say environmental changes is the main threat birds face.

Researchers compared the number of observed innovations of each species with their risk of extinction according to the Red List of the International Union for Conservation of Nature (IUCN).

Other instances of dietary changes between bird species were a great egret killing and eating a common sparrow in Brazil, rather than fish, and a crow stealing scraps from starlings feeding in a dump in Spain.

A Himalayan griffon, usually a carrion-eater, was spotted feeding on pine needles in India and a yellow-rumped warbler has been found eating dormant flies inside a heated milking parlour at a dairy farm during a cold spell.

Some innovations are simple, such as a Northern cardinal consuming nectar from shrimp plants. Others are complex, Ducatez said. 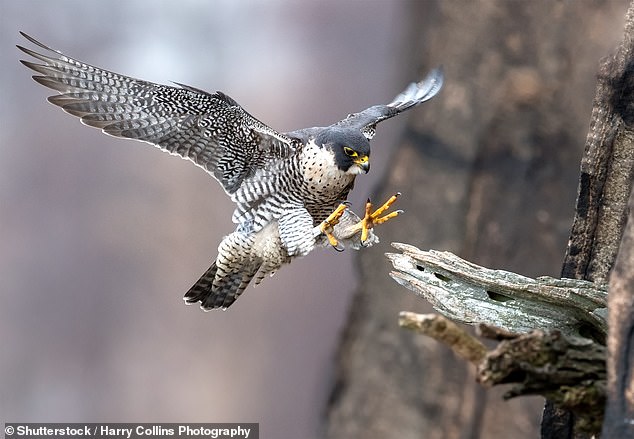 A peregrine falcon even used a train to attack birds as they were flushed by its passage through the forest. Another was observed using fishing vessels as platform for hunting petrels at sea, a food source otherwise unavailable

‘Gulls are particularly innovative, including the Pacific gull, that has been seen attempting to prey upon a greater crested tern in Kangaroo island, South Australia – an unusual behaviour for this species.’

But the study, which spanned 1960 to 2018, found innovation did not protect birds against invasive species or over exploitation.

This would explain why some of the most clever animals on the planet – such as parrots, whales, and primates – are at risk of being wiped out.

‘It must be taken into account the species with the greatest capacity for innovation have longer generation times, making them more vulnerable to hunting,’ he said.

‘This implies that, unlike what is usually assumed, innovativeness protects animals from some but not all the rapid changes in the environment.’

While fascinating, the findings have serious implications, say the team.

Currently, species from across the world face manmade threats like habitat destruction, overhunting and invasive species.

As a result, 13.5 per cent of bird species are now threatened with extinction.

WHAT IS EARTH’S SIXTH MASS EXTINCTION?