Birds start learning to chirrup before they hatch, study says

Birds start learning to peep, chirrup and sing well before they hatch by listening to their parents’ vocal calls, a new study has found.

Scientists found fluctuations in bird species’ heartbeat responses to their parents’ calls – from inside the egg – which they say shows evidence of them ‘tuning in’.

This shows birds are responsive even before they’ve hatched, demonstrating ‘a capacity to perceive and learn to recognise sounds in ovo’ – prior to birth.

Birds start learning to peep, chirrup and sing well before they hatch by listening to their parents vocal calls, researchers based in Adelaide, Australia report. Pictured, eggs of the superb fairy-wren (Malurus cyaneus) used in the Flinders BirdLab experiments 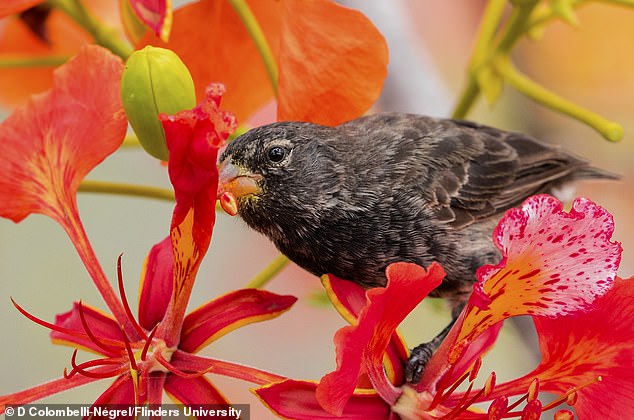 Darwin’s small ground finch, one of 17 Darwin’s finch species on the Galápagos Islands – and a species looked at for this study

The study was led by researchers at the BirdLab research group at Flinders University, Adelaide, Australia.

‘This research will hopefully inspire more study into the remarkable capacity of animals to learn sound,’ said study author Professor Sonia Kleindorfer, a Flinders University researcher who is also based at the University of Vienna.

‘By moving the time window for sound learning to the prenatal stage, this research direction opens pathways to measure neurobiological downstream effects of early auditory experience on behaviour and information processing.’

Darwin’s small ground finch is just one of the finch species found on the Galápagos Islands by the legendary British naturalist Charles Darwin.

The researchers measured response to sound in the egg using change in heart rate – well before birds hatch and start making complex calls or songs.

These calls and songs typically occur several months or even years after the bird has been born, according to the study authors.

In all, 138 embryos were played 60 seconds of audio consisting of calls from their own species (conspecific) and, as a comparison, different species (heterospecific) repeated every 10 seconds. 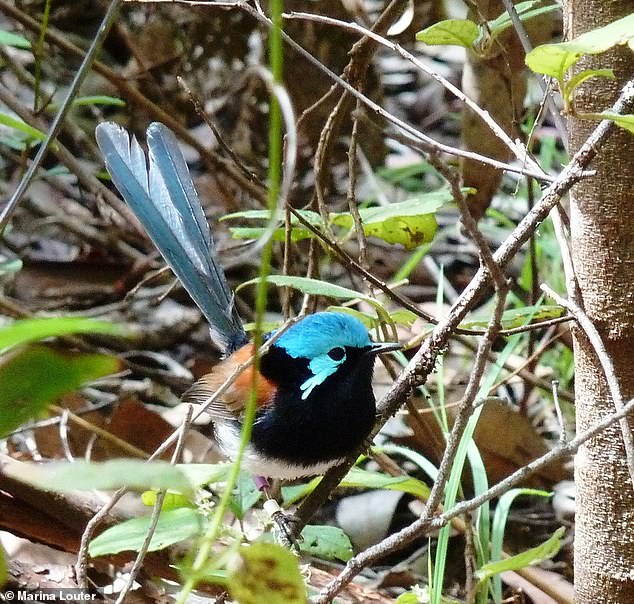 A male red-winged fairy-wren (Malurus elegans). This species is described as a ‘vocal learner’, meaning it learns to imitate a vocalisation from a vocal tutor (a parent)

Dr Colombelli-Négrel said their experiments had the benefit of being non-invasive, unlike previous work.

‘In the past, heart rate had to be measured invasively in eggs by opening the egg and hence damaging it and killing the embryos at the end,’ she said.

‘Here we used a heart rate monitor that measures heart rate by light absorption and hence does not damage the eggs so they can be returned to the nest to hatch.’

‘Learning to ignore a sound is as important as learning to respond to a sound.’

Among birds, there are both vocal learners and vocal non-learners.

Of the birds in this study, the superb fairy-wren, red-winged fairy-wren and Darwin’s small ground finch are all vocal learning species, while the little penguin and Japanese quail are non-learning species. 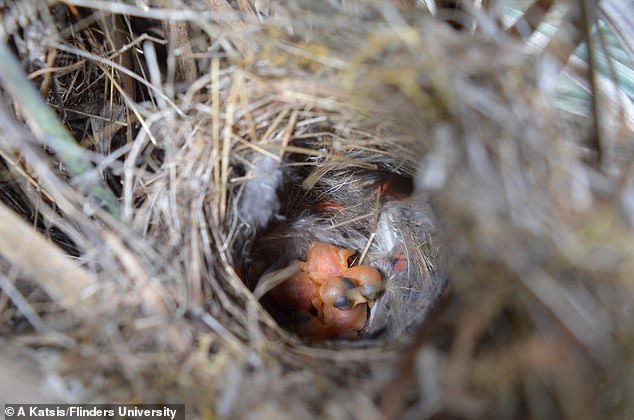 Hatchlings of the superb fairy-wren (Malurus cyaneus). The experiemnts were non-invasive, meaning no chicks died 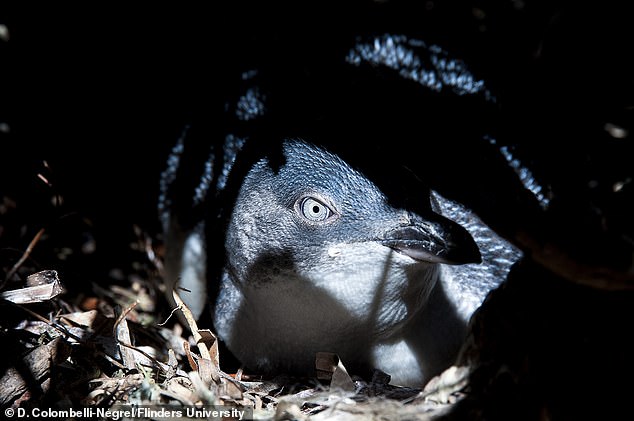 The researchers found both vocal learner and non-learner species responded to conspecific calls from adults, although the response strength was considerably larger in the vocal learners compared to non-learners.

‘We showed that embryos paid more attention to conspecific calls than heterospecific calls and that they habituated to repeated presentation of the calls, which is a form of learning.

‘By studying the capacity for sound learning in embryos, we are paving the way to new inroads into evolutionary and developmental timescales.’

The team also looked at whether embryos could habituate or grow accustomed to another bird’s call.

They found this was common to both vocal learning and non-learning bird species and may be more widespread than previously thought.

‘Long before actual vocalisation, we found that these tiny songbirds were also discriminating towards non-specific sounds and capable of ‘non-associative’ (not from parents) sounds, building on the complexity of vocal learning in songbirds,’ said Dr Colombelli-Négrel

The BirdLab group is now exploring in-nest calling by mothers in seven fairy-wren and grasswren species.

The paper has been published in Philosophical Transactions of the Royal Society B.

WHAT IS VOCAL LEARNING?

Vocal learning is the capacity to produce vocalisations based on the imitation of external sounds.

The definition also includes the ability to associate vocalisations with an outcome or produce an existing vocalisation in a novel context,’ Dr Diane Colombelli-Négrel at Flinders University told MailOnline.

Vocal learning is often presented as a binary behaviour – meaning species are classified as either vocal learners or non-learners.

In birds, vocal learning is shown by parrots and hummingbirds and, most notably, among the songbirds (Oscine passerines), a group of approximately 4,000 species.

Professor Sonia Kleindorfer, a Flinders University researcher, said there are many forms of vocal learning.

For example, vocal production learning is a form of vocal learning.

‘Vocal learning can include all forms of learning about sound, including learning to associate a sound with one individual or learning to ignore a sound (non-associative learning),’ said Professor Kleindorfer.

‘Vocal production learning refers to the capacity to learn to imitate a song from a vocal tutor.’

Among primates, ‘only humans can do it’, said Professor Kleindorfer.

‘Vocal production learning is only believed to occur in seven lineages of birds and mammals including humans.

‘As a result of the rarity of vocal production learning, animals have been grouped into so-called ‘vocal learners’ (those that learn to imitate a vocalisation from a vocal tutor) and ‘vocal non-learners’ (animals that produce vocalisations without imitating a vocal tutor).’