A violent thug who racially abused three sisters on board a train and ordered his dog to bite them has been jailed.

Luke Nicholls, 21, from Birmingham, pleaded guilty to one count of racially aggravated assault and two public order charges, one of which was religiously aggravated.

The incident happened on board a London Midland service from Kings Norton to Redditch on Saturday 8 July this year.

At Northfields station, Nicholls boarded the service along with another man who had a dog. He sat near three sisters, aged 16, 22 and 23 years old.

The dog then licked one of the victims on her jacket, she was uncomfortable with this and moved away. 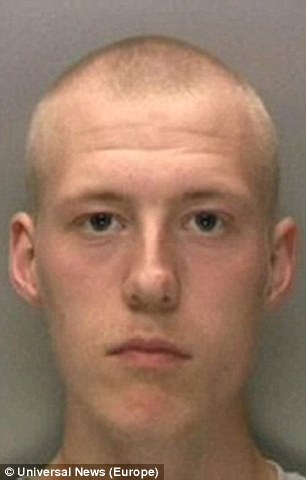 Luke Nicholls pictured on a train with his dog (left). The 21-year-old from Birmingham, pleaded guilty to one count of racially aggravated assault and two public order charges

Seeing her move away, Nicholls started to encourage the dog to sit on the seat next to the victims.

The three sisters then asked Nicholls if he could move his dog away. He became instantly aggressive, saying ‘do you want me to make it bite you?’

The sisters then moved carriages, fearing for their safety.

A few minutes later, Nicholls followed the sisters and when he passed them he told his dog to ‘bite them’.

He sat opposite the sisters tormenting them with his dog further, he then stood up and snatched one of the sisters phones.

The phone was taken back but Nicholls became increasingly aggressive to the sisters and then racially abused them.

The three sisters were too frightened to leave the train and were supported by staff and other passengers.

Nicholls was waiting outside Redditch station but left a short while later.

Nicholls appeared before Worcester Magistrates’ Court on 26 October where he was handed an eight week prison sentence.

He was also handed an additional twelve weeks prison sentence for breaching other suspended sentences.

Investigating officer PC Piotr Gass from British Transport Police, said: ‘This was a terrifying ordeal for these three sisters.

Nicholls was acting in an outrageous way, threatening to set his dog on them and being racially abusive.

‘I would like to thank the public for their help in identifying Nicholls and bringing him to justice.

‘They played a vital role in putting him behind bars. Likewise, the sisters were incredibly brave in challenging his disgraceful actions and recording him on their smartphones. This meant we had vital evidence in prosecuting him.

‘It is never OK to be targeted because of your ethnicity or religion. We will never tolerate it and we continue to urge victims and witnesses to report incidents on the railway to us.

‘I hope this sentence sends a clear message that we will investigate crime and will always strive for the toughest of sentencings.’