Officers from West Midlands Police bragged about cruising through Birmingham city centre in a so-called ‘Covid car’ which was ‘sent to investigate reports of breaches of social distancing laws designed to keep us all safe during the pandemic’.

They gleefully began sharing photos of their anti-Covid crusade after 12pm as they enforced Boris Johnson’s draconian Rule of Six in the major city.

But tweets show police in face masks and yellow high-vis jackets patrolling through deserted streets unable to find anyone breaking the coronavirus laws.

Officers were even forced to post a photo showing a community officer lecturing two men in face masks about the need to wear coverings.

The nine-tweet thread sparked a fierce online backlash, with furious Twitter users accusing West Midlands Police of wasting time enforcing rules that most people are obeying while the city is ‘plagued by knife, drug, gun and theft crimes’.

It comes as nine million people in England are now living under lockdown conditions as the Government imposes curbs on social gatherings following a panic over rising cases of coronavirus – with fears that London and Leeds could be next. 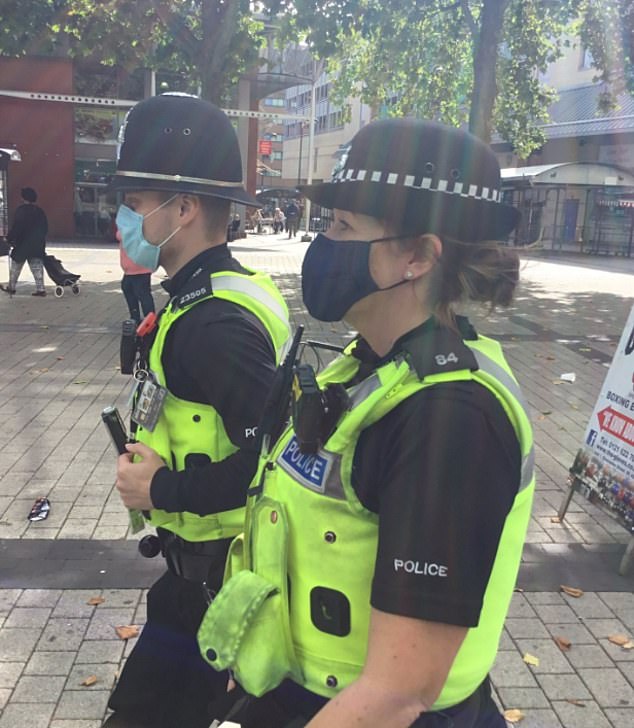 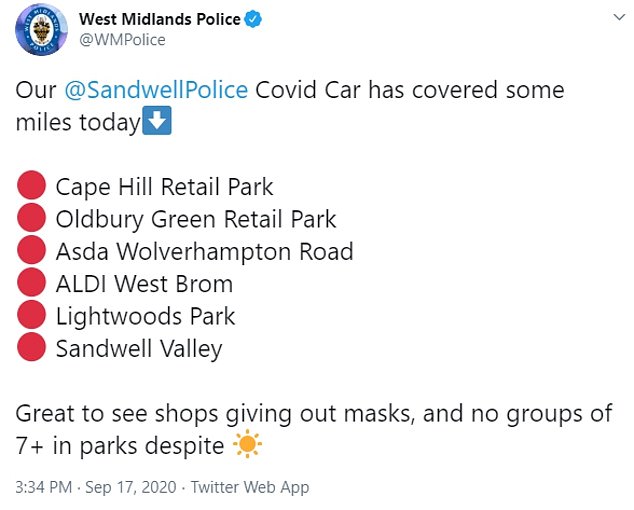 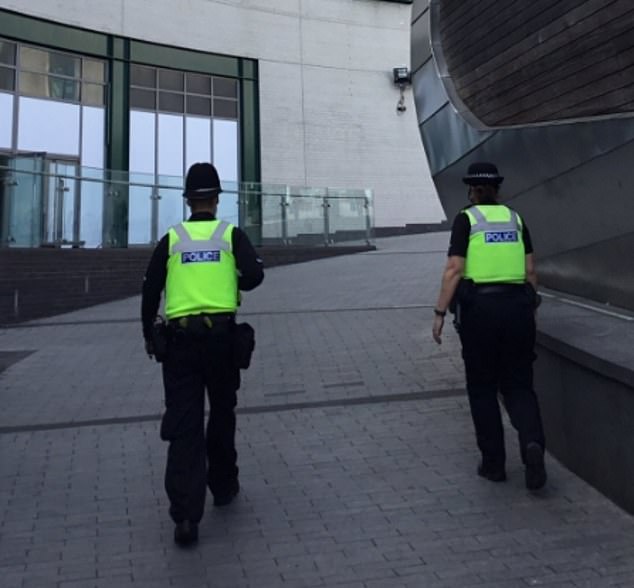 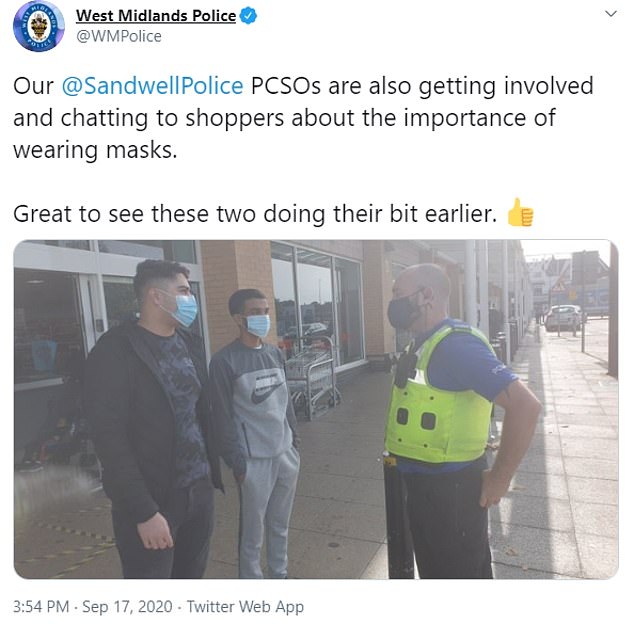 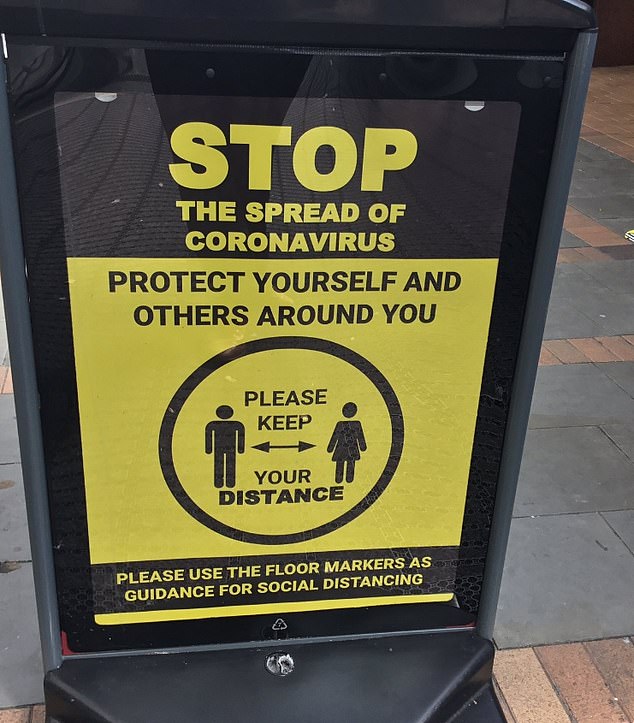 One furious Twitter account sarcastically commented: ‘Hats off to you for solving every criminal activity in the Midlands and it’s great to see my council tax is being used to battle such serious criminals!!’

Another said: ‘It’s not important at all. It shows that that your priorities are all wrong in a city where crime is going through the roof. You can’t complain about limited resources when you waste them in this way.’

‘Given all the problems in Birmingham & the reported lack of police resources, isn’t there anything with higher priority than this?’ one social media user asked

A Twitter account angrily complained: ‘Brilliant. Now do drug dealing throughout the region which is rife.’ When police pointed out that officers are handling cases of violent crime, one person responded: ‘It’s insane that this crazy rule needs to be policed when you can still do a whole host of other things’. 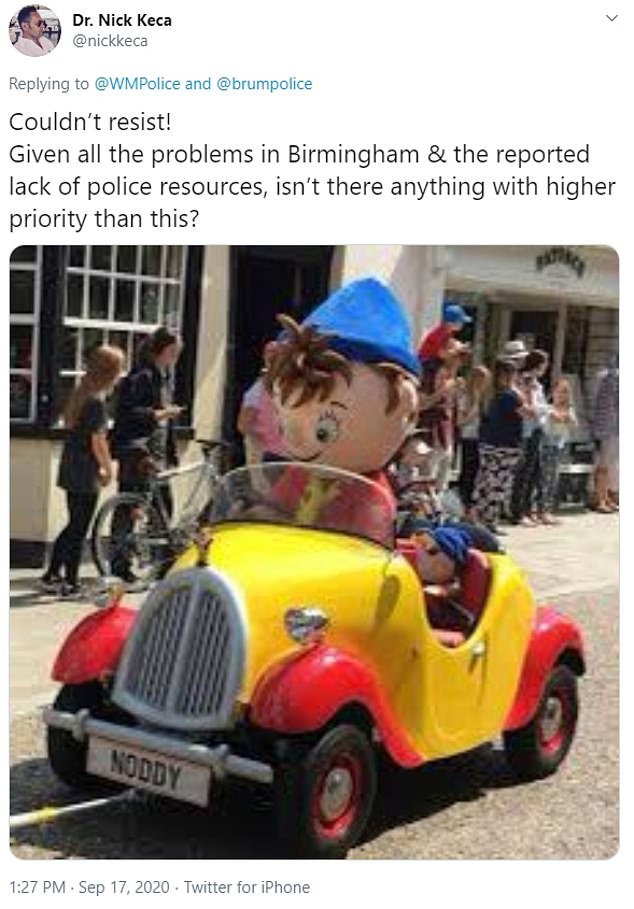 Furious Twitter users accusing West Midlands Police of wasting time enforcing rules that most people are obeying while the city is ‘plagued by knife, drug, gun and theft crimes’

Health Secretary Matt Hancock today confirmed the North East would be hit by a 10pm curfew on pubs and bars from tomorrow.

In a desperate attempt to curb spiralling rates across the region, the Health Secretary also confirmed that residents living in Newcastle and six other authorities are now banned from socialising with people outside their own households or support bubbles in private homes and gardens.

Pubs, bars and restaurants in all the affected areas – Northumberland, North Tyneside, South Tyneside Newcastle-upon-Tyne, Gateshead, Sunderland and County Durham – are now only allowed to offer table service, in hope of cracking down on the spread of the life-threatening disease.

What are the new restrictions for the North East?

People have also been advised to adhere to the following guidelines:

The Health Secretary said they were necessary to stop the spread of the virus and prevent another lockdown.

Around two million people live in the seven authorities, of which only three – Newcastle-upon-Tyne, Sunderland and Gateshead – were formally named on Number 10’s most up-to-date watchlist. Council bosses argue they needed tougher measures across the region to prevent a full-blown lockdown and save lives.

Announcing the drastic new measures in the House of Commons, which come into force from midnight, Mr Hancock said: ‘I know, the whole house knows, that these decisions have a real impact on families, businesses and local communities.

‘I can tell everyone affected we do not take these decisions lightly. We agree with the local councils that we must follow the data and act, and the data says we must act now, to control the virus and keep people safe. I know the people of the North East will come together to beat this virus, and beat it we must.’

He added: ‘We’ve seen concerning rates of infection in parts of the North East. Sunderland, for example, now has an incidence rate of 103 positive cases per 100,000 population. And in South Tyneside, Gateshead and Newcastle, figures are all above 70.’

Around 9.2 million people across the UK are now in areas of intervention, including parts of Greater Manchester, Leicester and Scotland. But neither Middlesbrough and Hartlepool in the North East, two other authorities officially named as a hotspot by Public Health England, were hit by the tough new measures.

The announcement comes amid fears thousands of students returning to university in the area could cause cases to rise even further. Around 40,000 students are expected to flock back to Newcastle University in the coming days, as well as nearly 20,000 to Durham University.

Rising numbers of infections in London and Leeds have prompted warnings the cities may soon head in the same direction as the North East with additional restrictions. And in North Yorkshire ‘full emergency mode’ has been declared after cases surged by 167 per cent in the first week of September.

But mounting requests for swabs as children return to school and workers head back to their desks have left Britain’s so-called ‘world-leading’ testing system unable to cope, with demand at up to four times capacity.

Baroness Dido Harding revealed the staggering mismatch between the number of people wanting tests and the ability to carry them out today as she claimed 27 per cent have no symptoms.

Extraordinarily, the Tory peer alleged no-one had ‘expected’ the ‘sizeable’ increase in demand, even though it was widely predicted, and blamed SAGE for getting their estimates wrong.

The Prime Minister today pleaded for Brits to ‘save Christmas’ by obeying his ‘Rule of Six’, warning that lockdown will only get stricter if the UK does not ‘flatten the hump of the camel’.

He begged the public to keep faith with his draconian rules despite the testing system descending into a shambles, with fears schools and offices will have to shut because people with mild symptoms cannot prove they are negative.

But leading experts have insisted the current spike in Covid-19 cases is nowhere near the scale of what was seen during the darkest days of the crisis in March and April, with one telling MailOnline: ‘We are not near the stage of the peak.’ Nearly 4,000 new cases were confirmed yesterday, the highest daily total in four months. 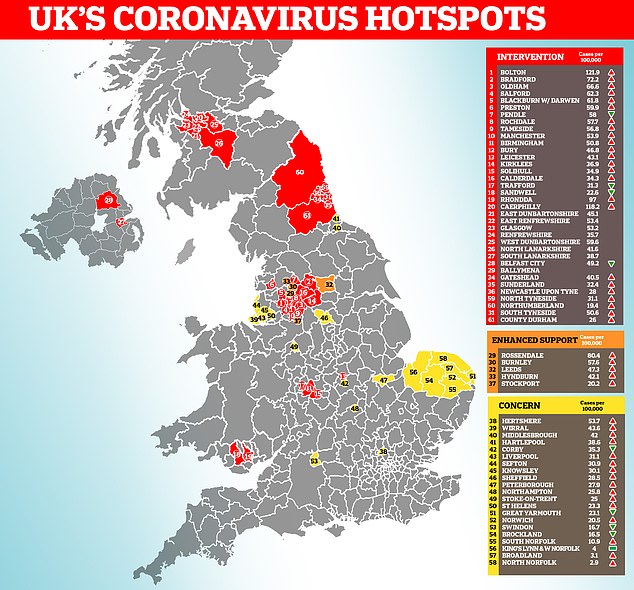 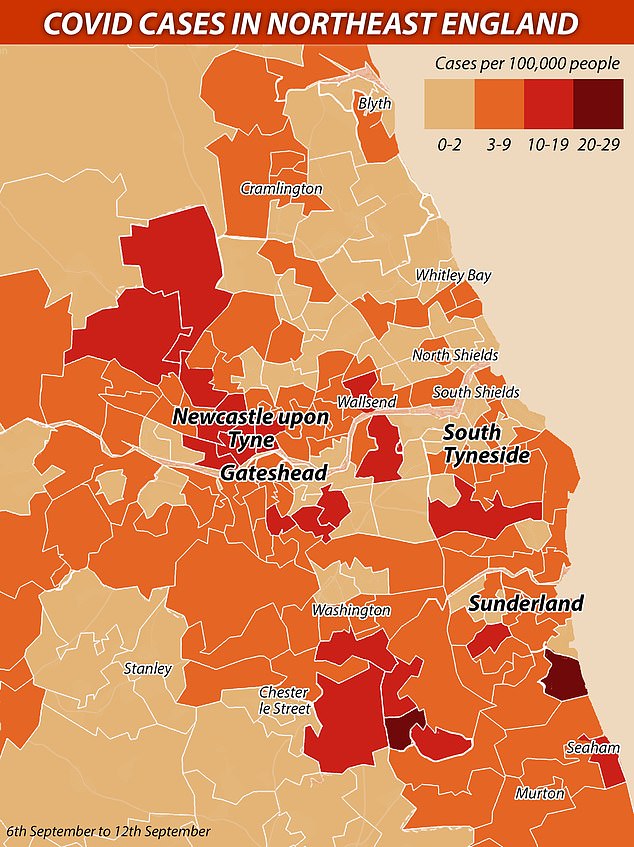 Coronavirus cases have been increasing rapidly across NE England. Newcastle has recorded a sharp rise in its weekly infection rate, up from 51.2 cases for every 100,000 people to 64.1 in the seven days to September 13 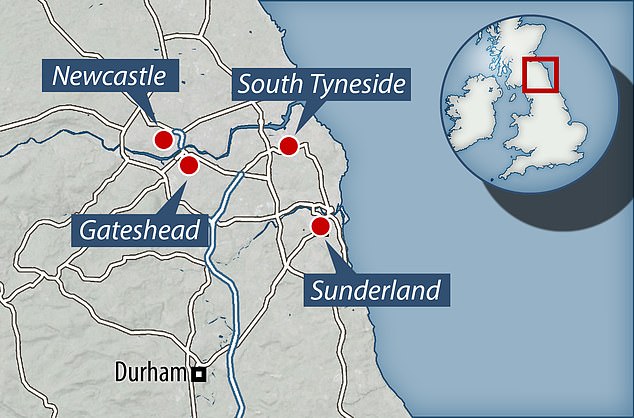 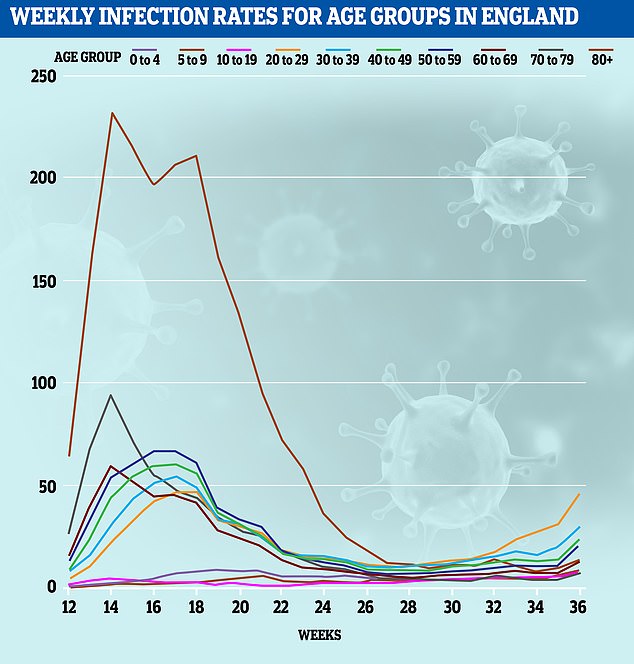 The most up-to-date PHE data, which was released on Friday, clearly shows cases are spiralling across every age group. People in their twenties — who aren’t as vulnerable to the disease and are likely to escape death or serious illness — are driving the spike with an infection rate of 46, which has doubled in the last three weeks 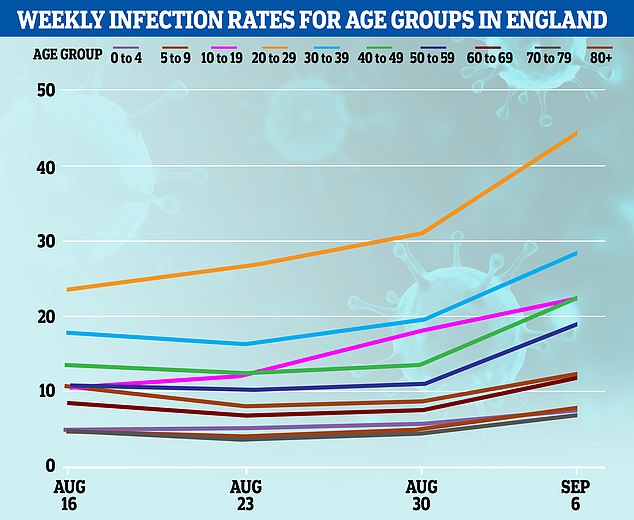 Public Health England (PHE) data reveals 23.4 cases are now diagnosed for every 100,000 people aged between 40 and 49 — up from 12.4 at the end of August. And coronavirus infection rates have nearly doubled in just a week for people in their fifties, jumping from 10.9 to 20 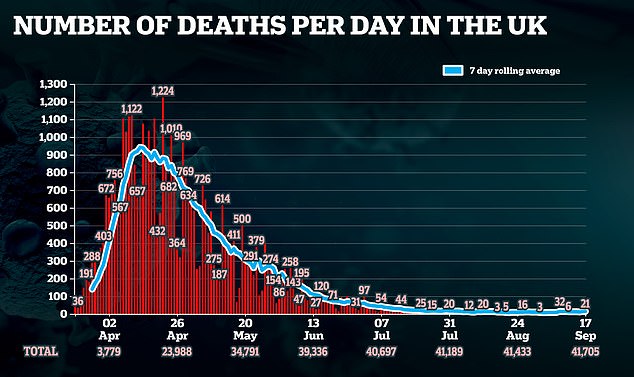 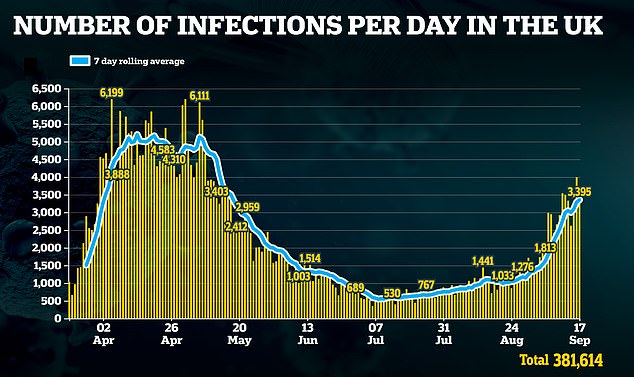