Birthday cake topper appears to be something rude

A photo of a Kylie Jenner Lip Kit themed birthday cake has divided the Internet, with many claiming the unusual dessert looks far more X-rated than intended.

The image, uploaded to an Australian Facebook group, shows a lurid pink creation which sits on top of a two-tiered cake.

Those who’ve seen the phallic-looking flourish have been left wondering just what its creator was attempting – with many offering their own rather X-rated interpretations.

While it is somewhat difficult to tell just what the cake topper is, the consensus is that it is a take on Kylie Jenner’s Lip Kit’s logo.

‘Why are there two under-cooked sausages on top of the cake?’ Asked another.

With third chiming in to say: ‘The cake looked good until they put the pink sausages on top of it.’

Inspiration: Kylie Jenner’s Lip Kit logo appears to have been the inspiration behind the creative cake topper

The comment set off a thread with many others also saying they thought the same.

‘I don’t know what that is but it’s gross,’ another added.

While a third summed it up perfectly with the comment: ‘I know they were going for the Kylie Jenner lip kit look (I hope!?) But that’s a big miss.’

A big miss: While some saw just what the cake’s creator was trying to attempt, the effort didn’t quite hit the mark

Others defended the creation and said it was a ‘better job’ than they could have done.

It’s not the first time something like this has happened.

Recently a photo showing a birthday cake for a two-year-old decorated with what appeared to be a very rude word went viral on social media.

The image, uploaded to Facebook, showed a pink birthday cake topped with what could be read as an extreme profanity. 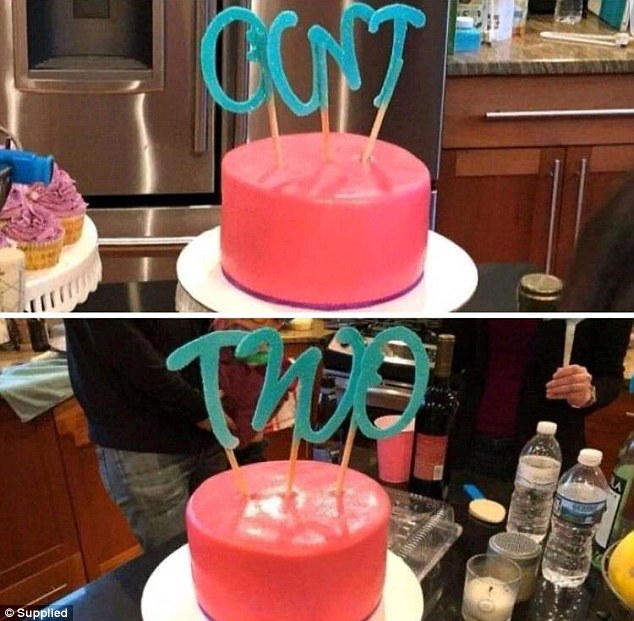 As to be expected, those who’ve seen the images online have commented on the topper with many joking about how fitting it was

However, the cake topper was simply the word ‘two’ facing the wrong way around.

‘Make sure the back of this cake is facing the wall,’ the amused mum captioned the post.

Before adding an edit: ‘I guess it depends on how your kid has been behaving that day as to which side you face it.’