Ella Rae Wise filmed scenes celebrating her birthday for The Only Way Is Essex on Monday at an outdoor swimming pool in Brentwood.

Leading her co-stars on the ITVBe show, which is due to air later this year, she was joined by the likes of Jordan Brook, Elma Pazar, Dan Edgar and Amber Turner.

Wow! Ella Rae Wise filmed scenes celebrating her birthday for The Only Way Is Essex on Monday at an outdoor swimming pool in Brentwood

Clutching a pair of sunglasses, she kept things casual with a pair of brown leather sandals and accessorised with a sparkling silver watch.

Turning around to exhibit her peachy rear, the influencer reclined into a white chair and sipped on cocktails with her pal Junaid.

Amber, 29, and Dan, 32, put on a loved up display on Monday, as they filmed TOWIE at Courtney Green’s birthday at Marsh Farm Animal Adventure Park.

The couple, who have been together for four years, looked typically fashion forward as they filmed the scenes for the newest season with their miniature goldendoodle Oliver. 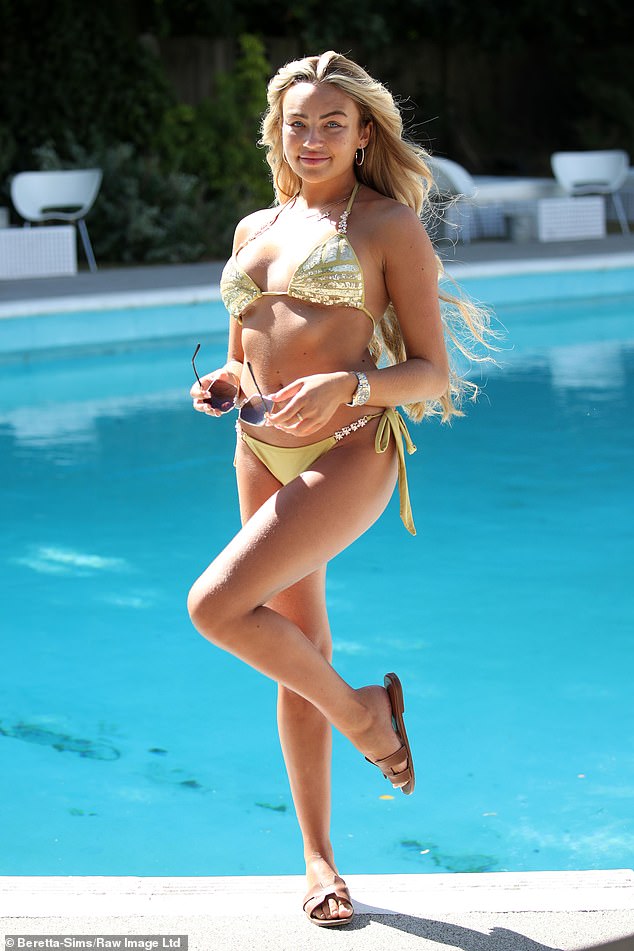 Out of this world: Donning a pair of sunglasses, she kept things casual with a pair of brown leather sandals and accessorised with a sparkling silver watch 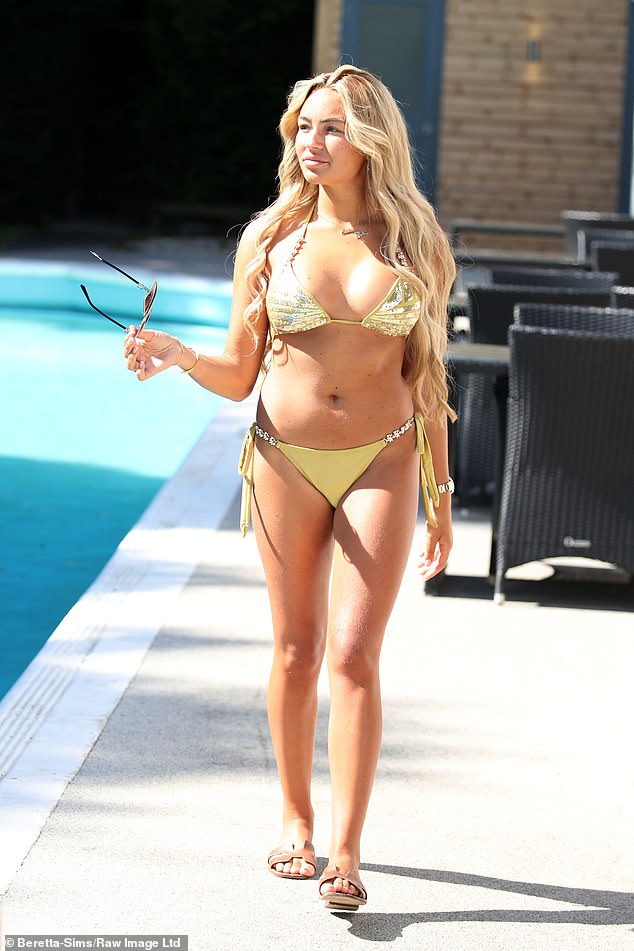 Pals: Leading her co-stars on the ITVBe show, which is due to air later this year, she was joined by the likes of Jordan Brooks, Elma Pazar, Dan Edgar and Amber Turner

They appeared to be as smitten as ever despite being recently rocked by claims that Dan said he had ‘always wanted a piece’ of Ella.

The couple appeared in excellent spirits after Dan was last month accused of flirting with Ella who’s 11 years his junior, during an Essex night out.

Ella sent a voice note to friends that circulated in Essex claiming Dan has always fancied her, and once Amber, 28, heard the message, she was furious, a TOWIE insider claimed.

The insider revealed: ‘Amber couldn’t believe what she was hearing. 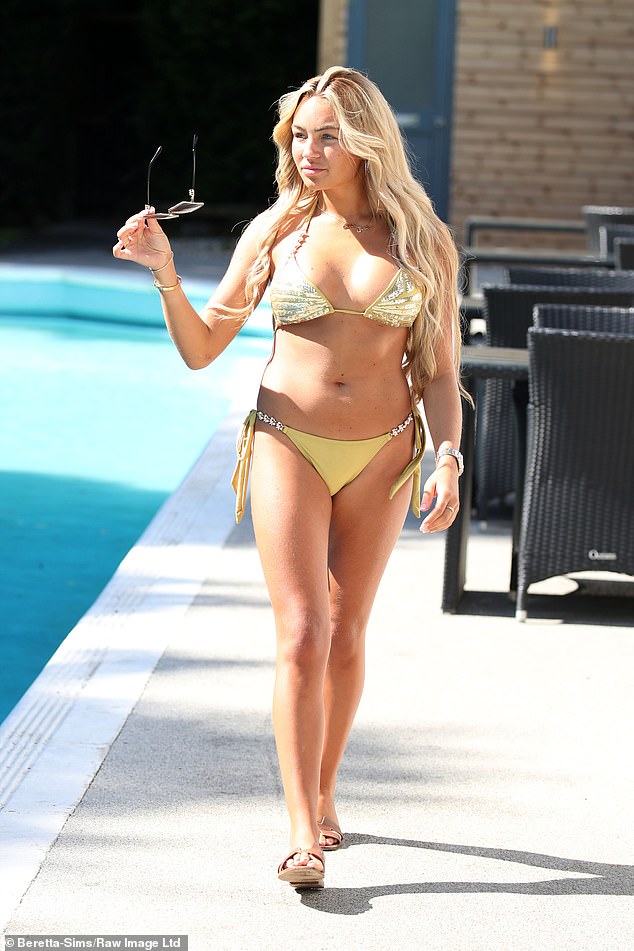 Gorgeous: She ensured to send temperatures soaring during the outing

Sizzling: She causes onlookers to gawk wherever she goes 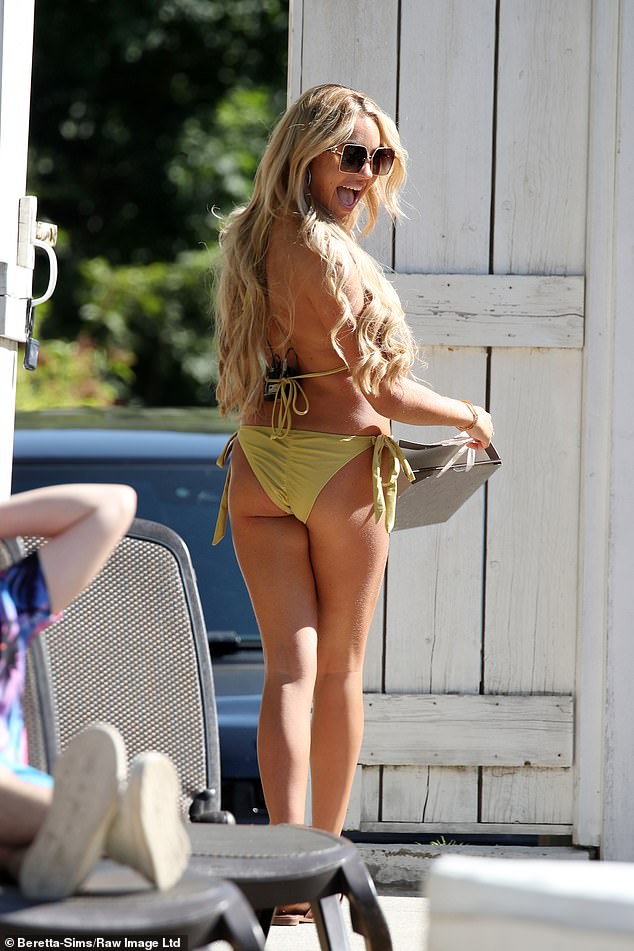 Pert: Ella turned around to exhibit her peachy rear at one point 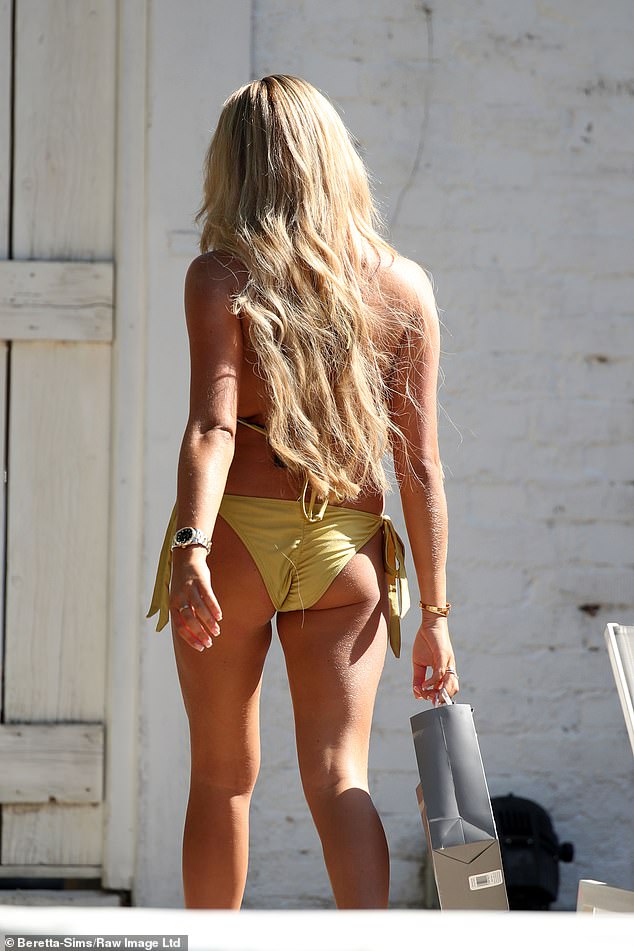 Strolling: The birthday girl carried a grey gift bad as she strutted around the swimming pool

‘She lives with Dan, they have been together for years and share a dog, she thought they had moved on from Essex rumours and gossip.

‘To be confronted with this all during filming for the new series in the Dominican Republic was hard for her too, she didn’t expect to be at the forefront of another storyline about her relationship.’

The TOWIE cast has recently been filming for the upcoming season in the Caribbean.

Bosses have signed up Absolutely Ascot star Mia and her two close friends Hannah and Pia for the new series, along with Love Island’s Elma Pazar. 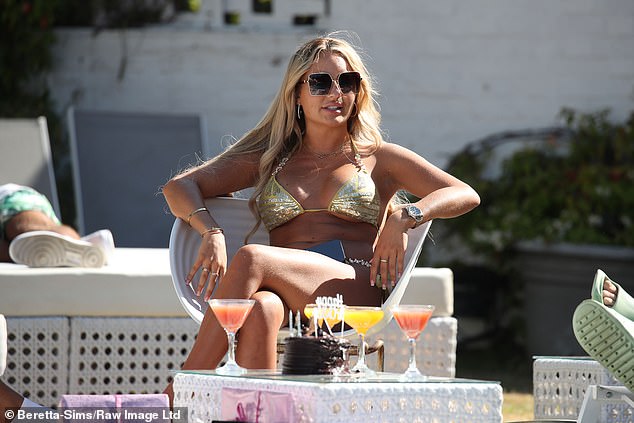 Having a blast! The influencer reclined into a white chair and sipped on cocktails 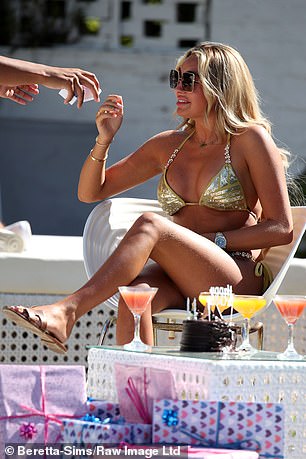 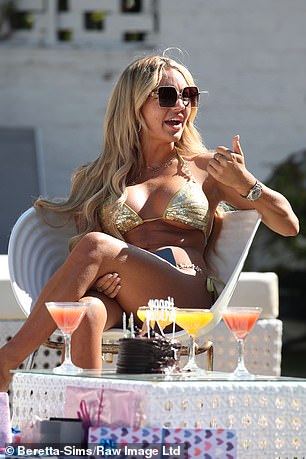 Talkative: She chatted away with her pals as they sat poolside 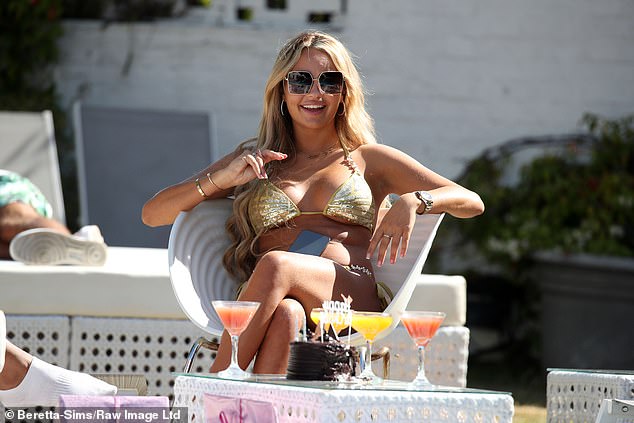 Beaming: She exhibited her sparkling smile while grinning from ear-to-ear 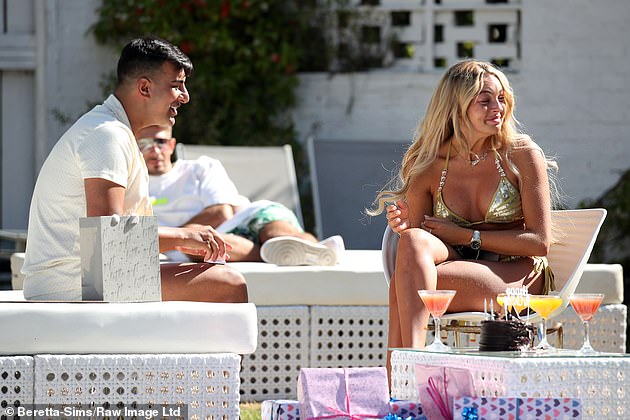 Buddies: Junaid, a series newcomer, also seemed to be having a great time

Earlier this summer, Hannah, Mia and Pia, who often share glimpses of their glamorous lifestyles on social media, took to Instagram to share they were joining the show.

Alongside a sizzling snap of the girls in the Dominican Republic, where the Essex-based show filmed special episodes, Mia penned: ‘Brunette Trio. So happy to be working with my 2 best friends that are more like sisters.

’17 years of friendship, we’ve done everything together and so much more to come! Love you both to the moon and back. So excited for our new chapter [sic]’.

According to The Sun, Mia only wanted to partake in the show if she could do so alongside her friends, with a source explaining: ‘As soon as bosses met all three of them, they knew they were onto a winner. 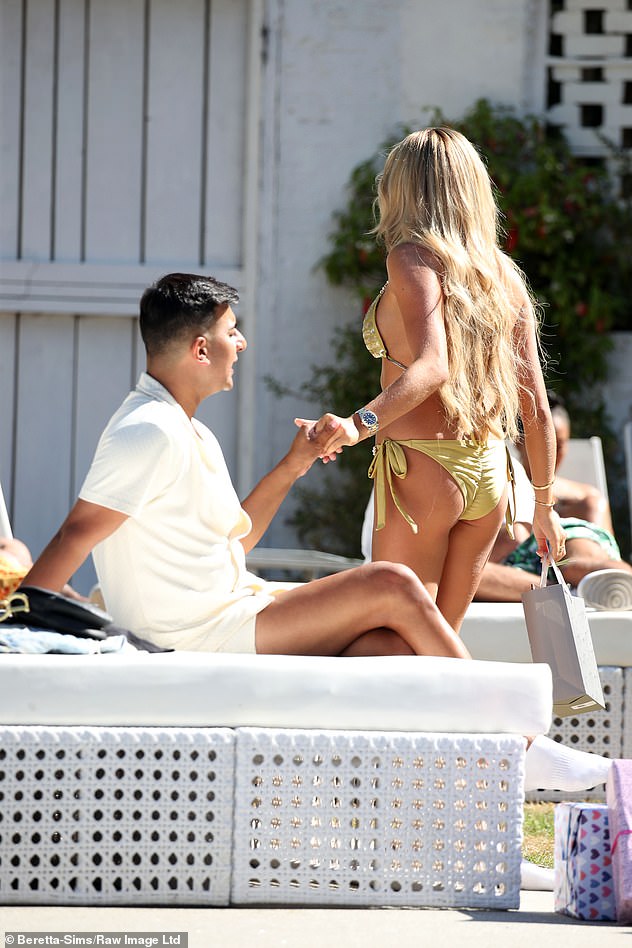 Cute: The pair could be seen holding hands at one point 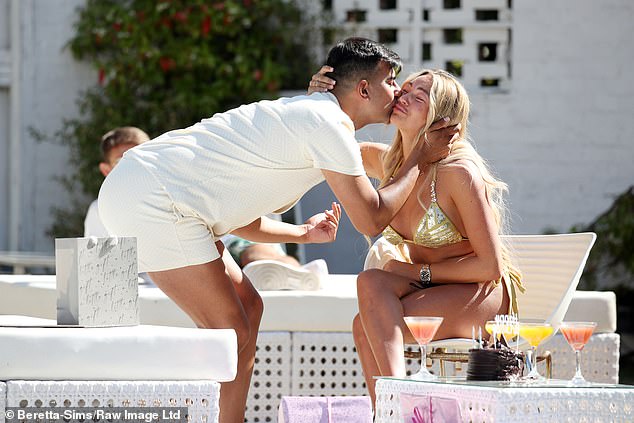 Smooch: Junaid planted a kiss on his pal’s cheek as they greeted one another 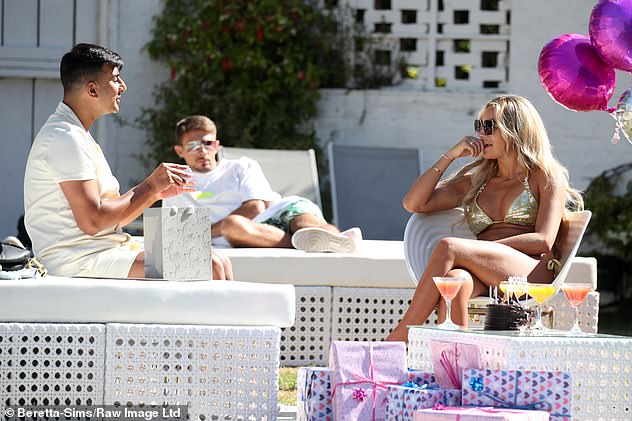 Chatting: They seemed to be deep in conversation

‘They are a force to be reckoned with and will bring so much drama to the new series. They know some of the cast already and there is beef between some of them, so expect some explosive telly.’

It has been said that the original plan was for the newbies to join the cast after the episodes abroad had been filmed, but that has now changed.

The insider added: ‘It was a no-brainer to get the girls out in the sunshine and make a big impact on the opening episodes of the new series. Sparks are already flying and it will be great TV.’ 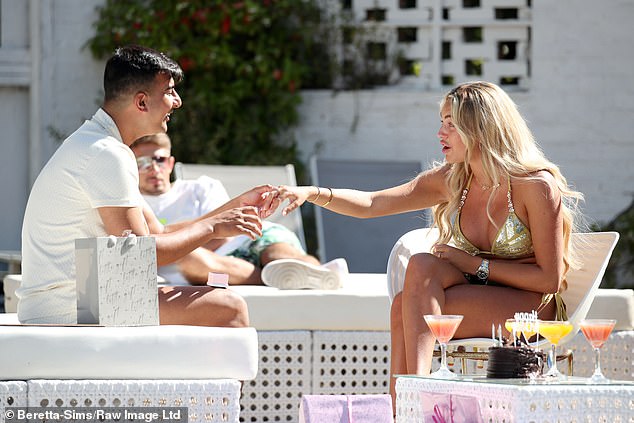 Adorable: Junaid and Ella put on a tactile display during the day out 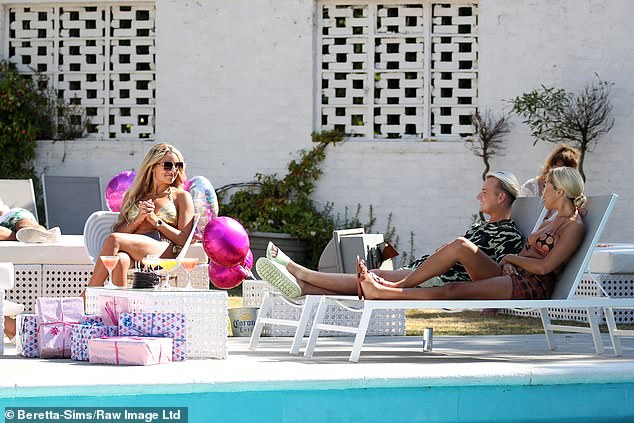 Woah! Ella was surrounded by collection of bright pink balloons and wrapped presents 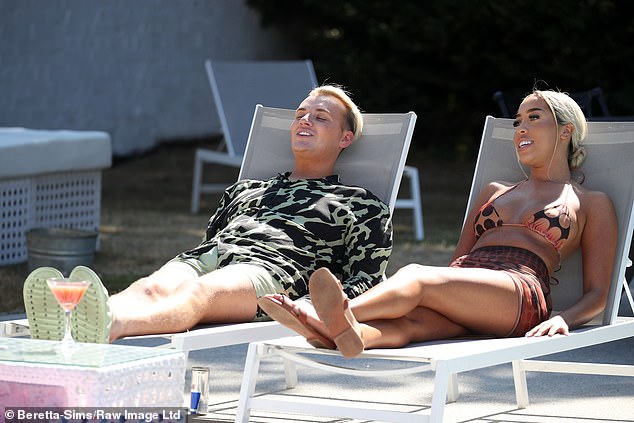 What a pair! Danni Imbert and Harry Derbidge soaked up the sun beside one another 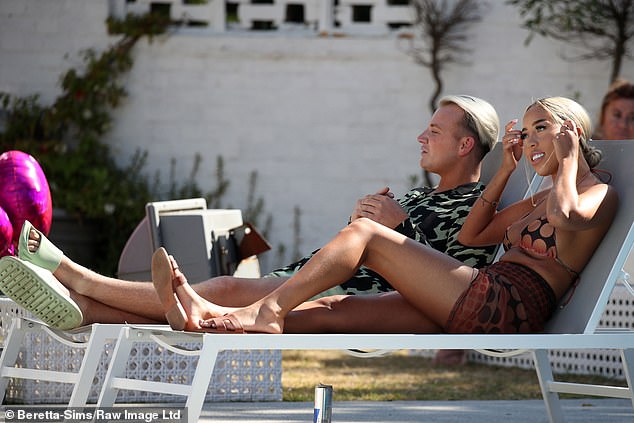 Legs for days: Danni looked sensational as she kicked out her toned pins

She was a passenger in the vehicle which plunged 70ft off a cliff in Turkish port city Bodrum on July 3, leaving her with severe injuries – including a broken arm.

The crash took place at around 4.30am and investigators established that the car, driven by McLean, hurtled around 70 feet over a left turn bend and landed in a ravine almost 30 feet below.

Jake was pronounced dead at the scene while Yazmin was rushed to hospital, where she underwent treatment for her injured arm.

He and Yazmin were driving in a blue Mercedes E class saloon along a windy, mountainous road between the coastal city of Bodrum and the seaside town of Yalikavak as they returned from a night out. 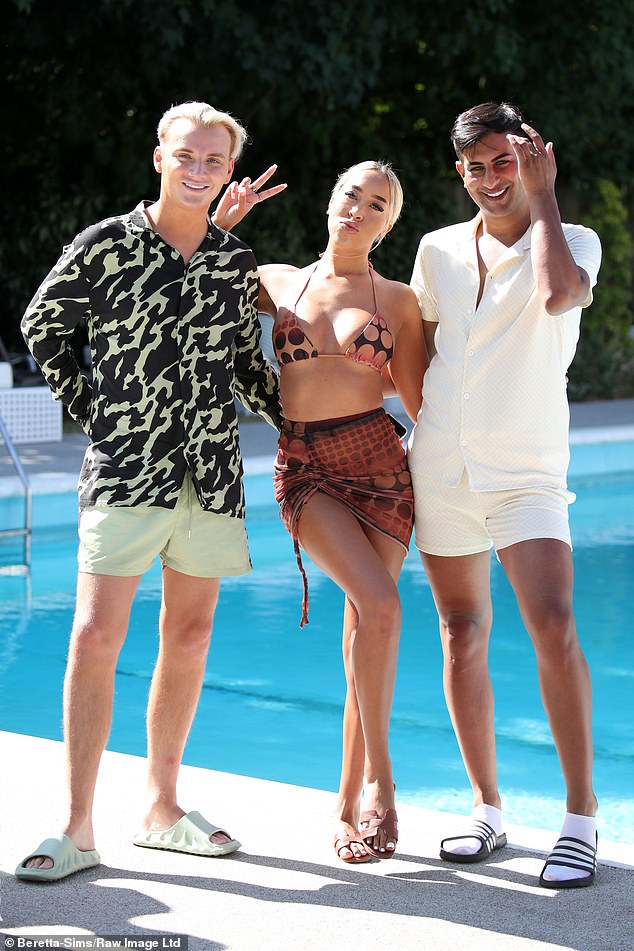 Posing: Junaid looked stylish in a white shirt and matching shorts while completing his look with comfy white socks and black slides 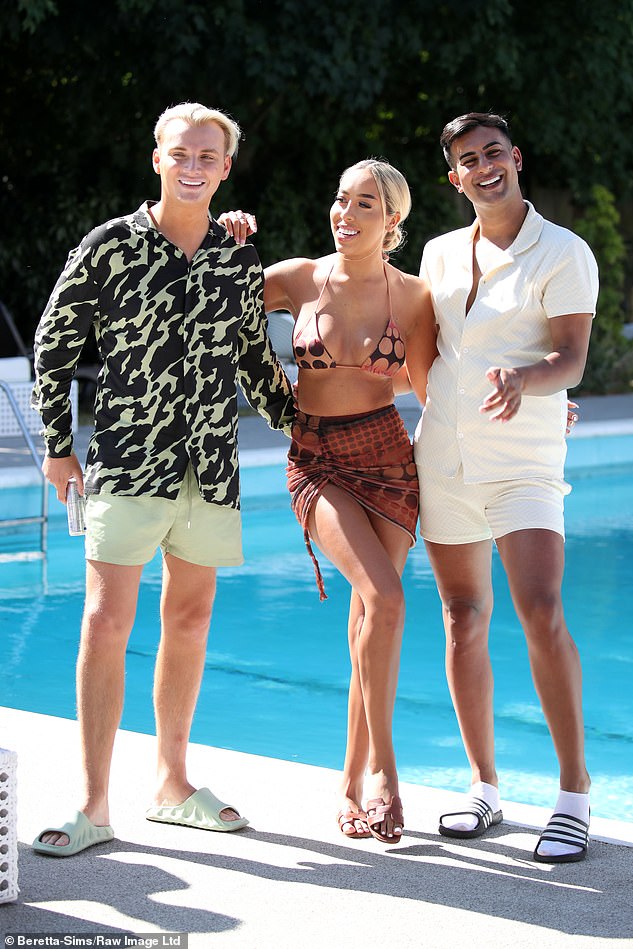 Smiling: The three-piece grinned from ear-to-ear at photographers 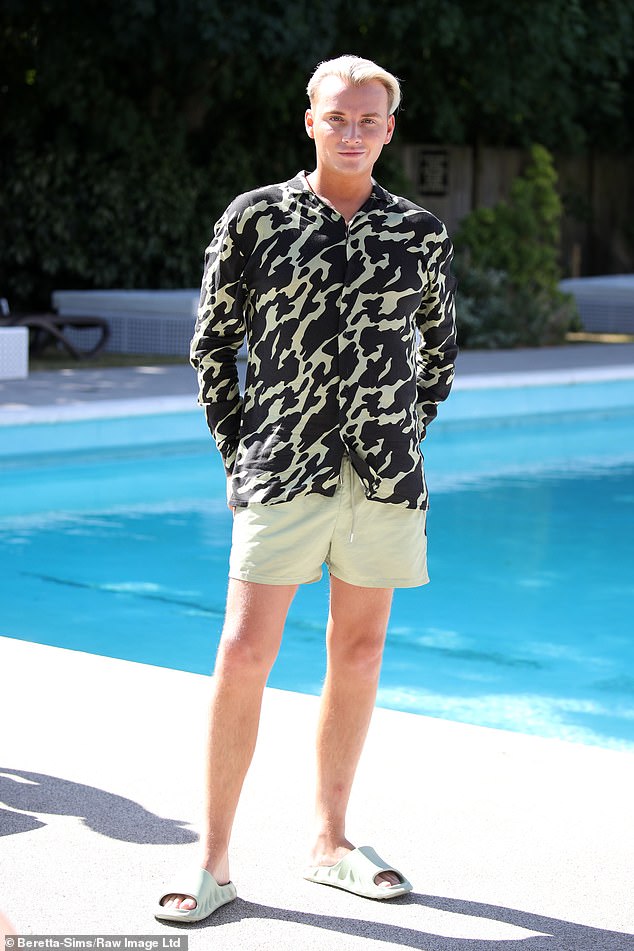 She severed an artery and a nerve during the accident- with UK doctors warning that she may never have full use of her right arm again.

During the crash, the TV personality deliberately broke her trapped arm to escape the scene and rush for help – while partner Jake lay unconscious.

With doctors telling her it’s a ‘miracle’ she’s still alive following her brush with the ‘notorious’ crash spot, Yazmin opened up to The Sun about the experience upon returning to the UK.

Admitting she is unable to sleep without her mother Lisa by her side following the ordeal, the traumatised star shared her inability to comprehend surviving when Jake did not. 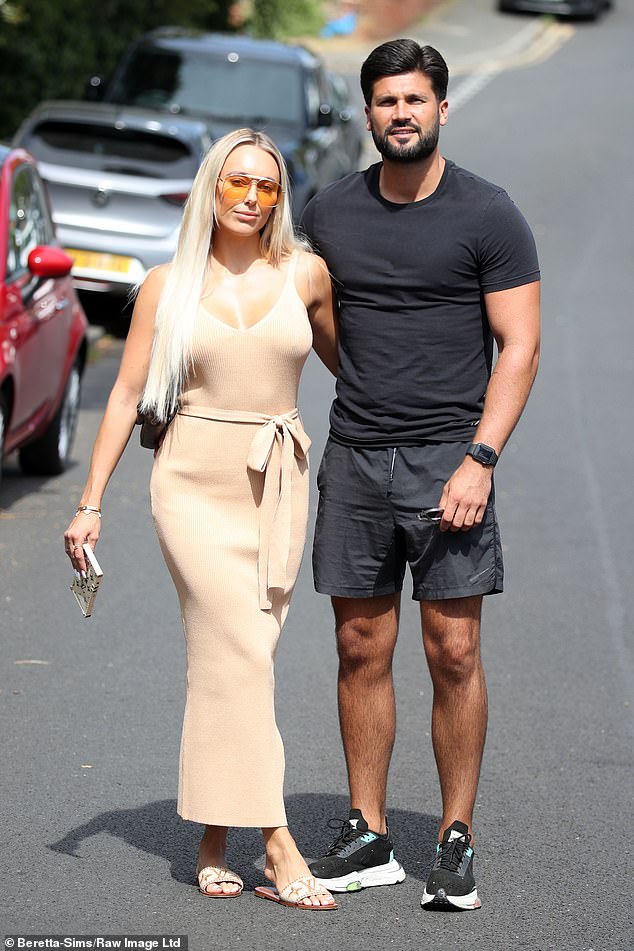 Emerging: Amber Turner and her boyfriend Dan Edgar put on a united display amid recent drama 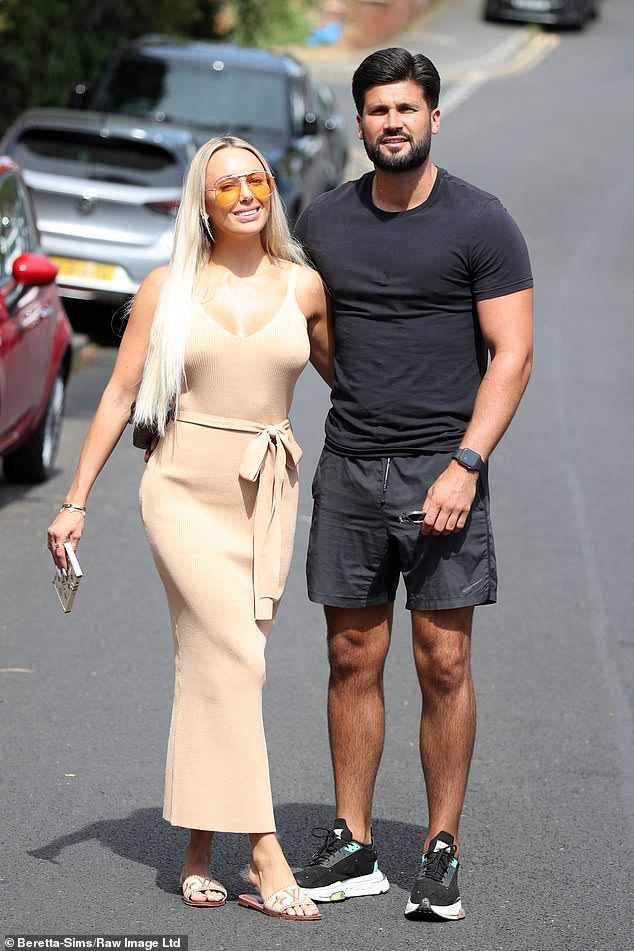 Strong: They appeared to be as smitten as ever despite being recently rocked by claims that Dan said he had ‘always wanted a piece’ of Ella 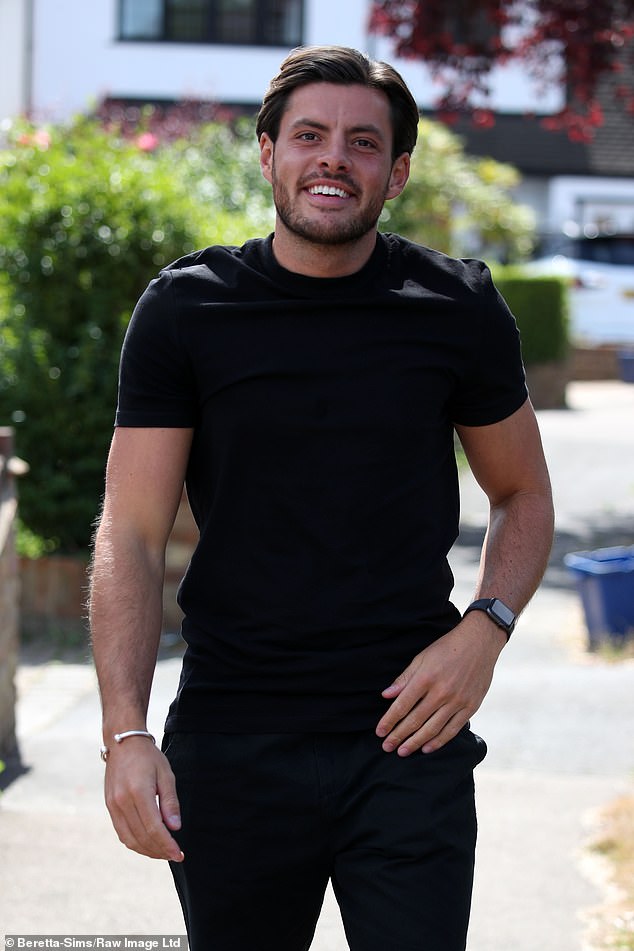 She said: ‘I severed an artery and a nerve, that’s why I bled so much. The doctors called me an angel, a miracle, because it’s a notorious spot and people have never survived. Now I’m just wondering how the hell did my partner die while I’ve survived? It’s made me look at life totally differently.

Yazmin continued: ‘I am definitely going to need therapy for a while, and I’m going to try some in-patient treatment too. I know this will live with me forever, I need to take it slowly.’

‘I could have been like Jake and not survived so I’m just very grateful and lucky that if that’s the worst case ­scenario, I will deal with it as best I can. The scarring that I have is awful so I will always have that as a reminder. But at least I’m still alive,’ she explained.

Dressed up: Former Love Island star Elma Pazar left little to the imagination as she exposed her underboob in a skimpy black bra top 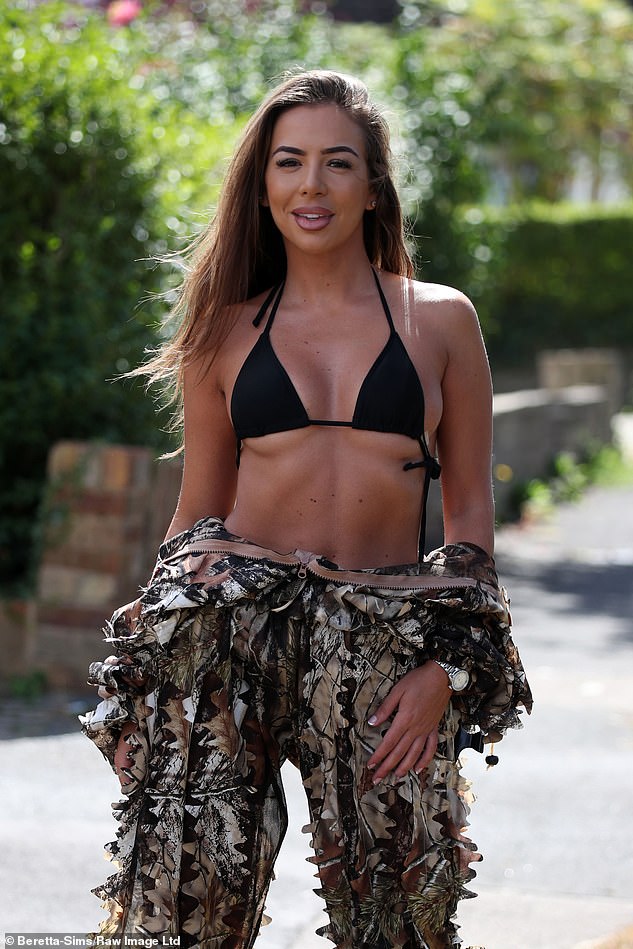 Sizzling: She sent temperatures soaring with the get-up

Fashion forward: She unzipped a camouflage onesie to flash her washboard abs 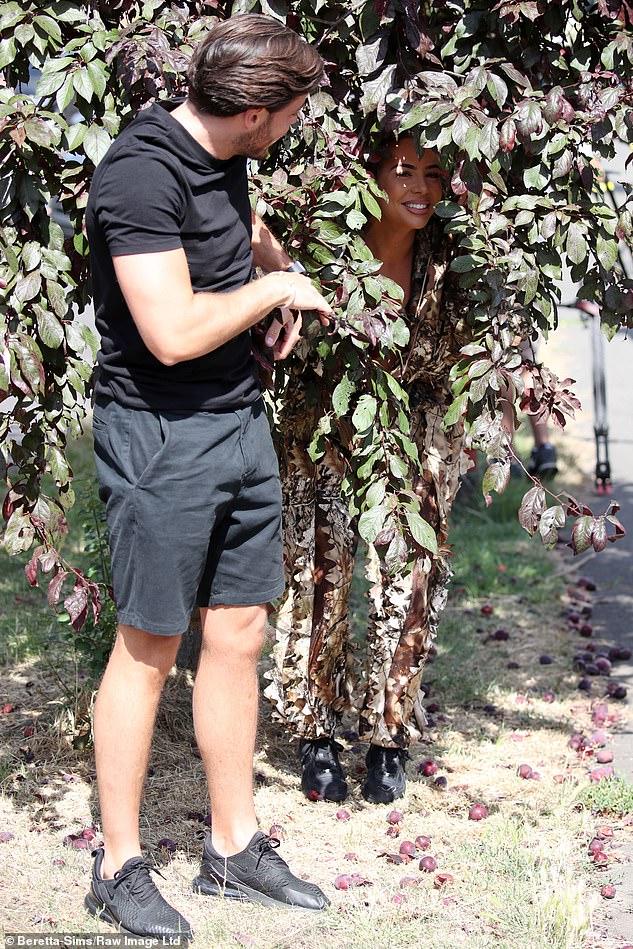 Larking about: She certainly blended in with some nearby foliage 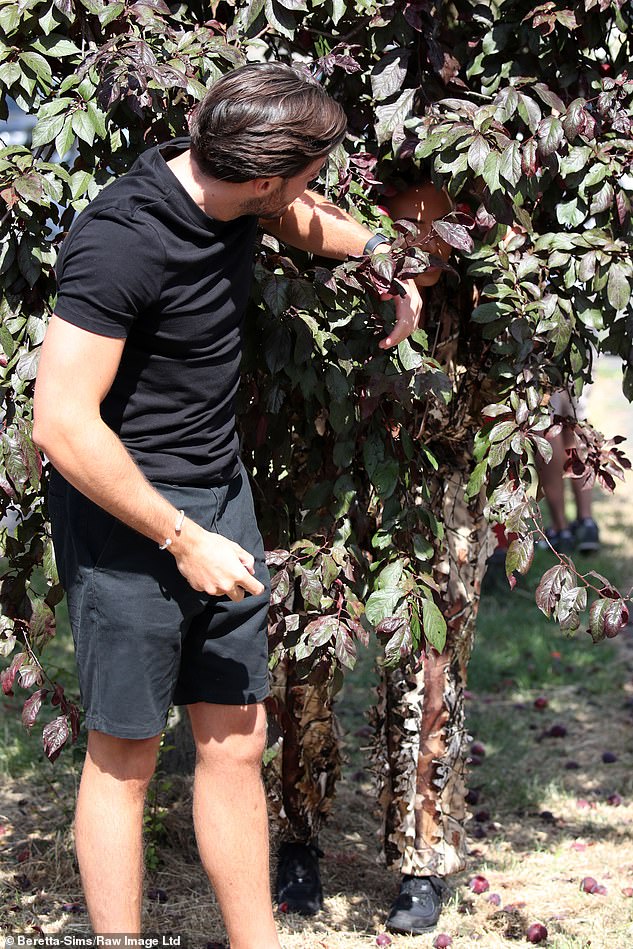 Hilarious: Jordan couldn’t contain his laughter as he joked with the fellow newcomer

As she continues to recover from the terrifying experience, Yazmin told how her emotions are ‘very up and down’ as she processes the grief of losing Jake.

She detailed how she had lost relatives in the past, including her beloved Nan last year, but no one who she’s loved in an ‘intimate way’, admitting it’s ‘very difficult’.

The television personality had been on holiday with Jake in the resort of Bodrum where the terrifying incident took place, as the pair were currently ‘off’ but had taken the trip to reconcile.

But Yazmin now fears she may be banned from her boyfriend’s funeral over tensions with his family, as his mum, Anita Walsh, believes an argument between Jake and Yazmin could have contributed to the crash.

While the reality star denies reports of a bust up and claims the trip made things ‘perfect’ between her and Jake, an Assistant Prosecutor who cannot be named under Turkish Law told MailOnline on July 6: ‘We have spoken with Jake’s mother and she has told us that something was going on in the car that distracted him.

‘She does not believe that this accident was caused by his poor driving. She said that he is a very skilled and experienced driver and would not have lost control of the car like this.’

Prosecutors are investigating whether Jake was drink-driving, while the on-off couple argued outside a club at 3am, shortly before Sunday’s crash. 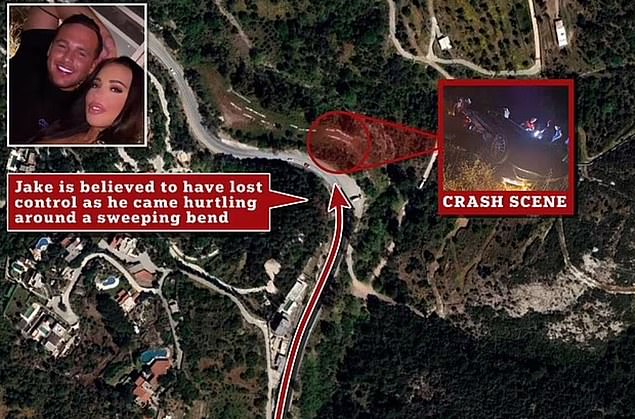