Dr. Deborah Birx calls out the press for ‘slicey and dicey’ headlines and says she’s bothered that Donald Trump’s disinfectant comments are ‘still in the news cycle’

Dr. Deborah Birx said she was concerned about some of the ‘slicey and dicey’ headlines she’s read and said Sunday that she doesn’t think President Trump’s musing about injecting disinfectant to treat the coronavirus should be in the news anymore.

Birx, a member of the president’s coronavirus taskforce, was asked by CNN’s Jake Tapper about comments Trump made at his Thursday press briefing and whether they bothered her as a medical professional.

‘Well, I think it bothers me that this is still in the news cycle,’ Birx replied.

On Sunday, Dr. Deborah Birx said she was bothered that President Trump’s controversial comments about injecting disinfectant were ‘still in the news cycle’ 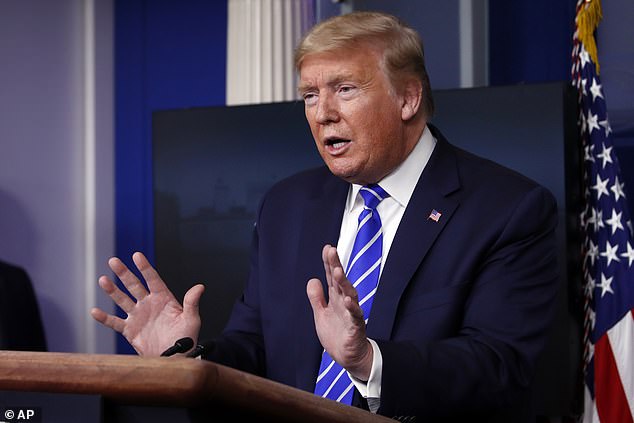 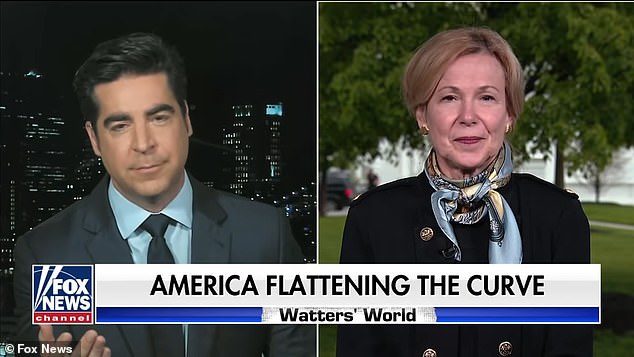 On Saturday, Birx (right) talked to Fox News Channel host Jesse Watters and was asked about the fairness of media coverage

On Thursday upon hearing some early research on sunlight’s effect on the coronavirus, Trump started riffing in real time.

‘Supposing we hit the body with a tremendous – whether it’s ultraviolet or just very powerful light,’ Trump said. ‘Supposing you brought the light inside the body, which you can do either through the skin or in some other way.’

‘Then I see the disinfectant, where it knocks it out in a minute. One minute,’ the president continued. ‘And is there a way we can do something like that, by injection inside or almost a cleaning? Because you see it gets in the lungs and it does a tremendous number on the lungs.’

Birx, seated a few feet away in the White House briefing room, was asked her thoughts.

The research was about how to kill the virus on surfaces and not a treatment – and she said as much.

‘That was a dialog he was having between the DHS scientists and himself for information he had received and he was discussing. When he turned to me, I made it clear and he understood it was not as a treatment,’ she told Tapper on Sunday.

Birx indicated that she was worried too much time was being spent on Trump’s flub.

‘Sometimes I worry that we don’t get the information to the American people that they need when we continue to bring up something that was from Thursday night,’ she said on CNN.

In a Saturday night appearance on Fox News Channel, host Jesse Watters asked Birx if she thought American media coverage of the taskforce had been fair.

‘I think the media is very slicey and dicey about how they put sentences together in order to create headlines,’ she replied.

She talked about how studies show that some people only read headlines and don’t click into news stories – and sometimes stop reading if there’s not a graphic.