A popular Spanish football TV programme has accused UEFA of ‘conditioning’ Euro 2020 for England to reach the final – and even insisted the Three Lions’ decisive penalty against Denmark highlighted the bias.

Gareth Southgate’s side will play Italy in Sunday’s final at Wembley after defeating Denmark on Wednesday, with the Azzurri knocking out Spain the day before in London.

England have played all but one match at Wembley this summer and El Chiringuito, famed for their infamous post-match rants, believe the decision to award Raheem Sterling a controversial penalty against Denmark is a clear sense of favouritism. 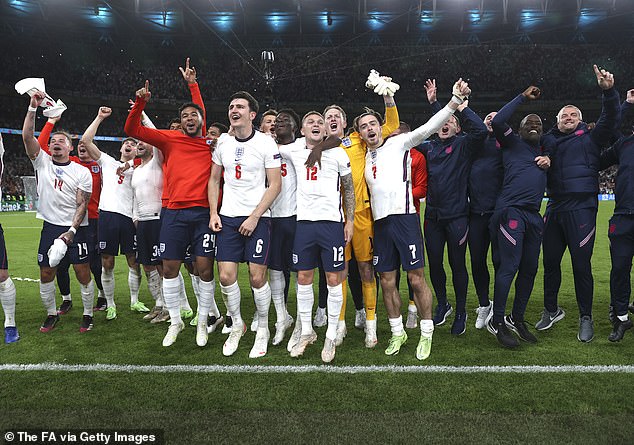 What was the reaction on El Chiringuito to that England penalty?
Well, here’s conspiracy theories and mention of Brexit. pic.twitter.com/0q3xxPXS70

Journalist Roberto Morales, a guest on the show, also suggested that the tournament should not have been held in England due to the United Kingdom’s decision to leave the European Union.

The journalist responded: ‘For me, this has been the most shameful competition that we have covered. It has been pathetic.

‘We’ve had matches in cities that aren’t even European in any sense. We’ve got a final that was prepared for a country that left the European Union. 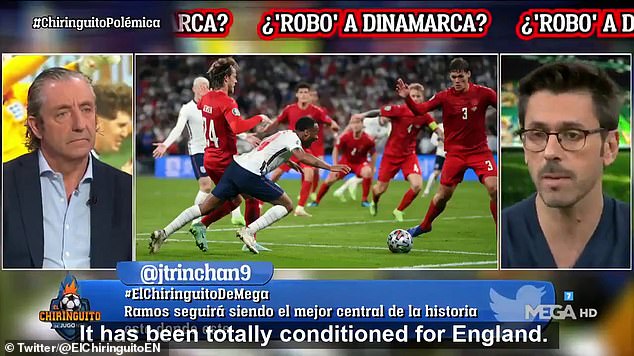 ‘All that was missing was the help received (on Tuesday) with the penalty in a game that was proving complicated.’

England winger Sterling went down under several Denmark challenges, including a final one from Brentford midfielder Mathias Jensen, before Dutch referee Danny Makkelie pointed to the spot.

Three Lions captain Harry Kane saw his initial spot kick saved by Kasper Schmeichel but the rebound fell into the path of the England striker who scored to put them 2-1 up.

The paper claimed the Three Lions were only given their winning penalty against Denmark because UEFA wanted to repay the favour to Prime Minister Boris Johnson for his role in stopping the European Super League.

A column in popular Italian newspaper Corriere dello Sport attacked the tournament for ‘stinking of Anglophilia and anti-Italianism’.

The fuming piece said UEFA gave ‘a nice little help to Southgate’s boys’ by scheduling all their games, bar one, at Wembley, while other teams were forced to criss-cross the continent.

It claimed a ‘football crime was committed’ when England were awarded a penalty in extra time against the Danes because ‘no one noticed’ there were two balls on the pitch.

The piece joked the Danes ‘took it pretty well’ after a supporter said England would put ‘that penalty in the British museum with the other stolen s**t’.

The paper’s back page levelled similar accusations on Thursday – attacking the English as ‘bores’ on the pitch and saying they relied on the referee for the win.

The headline made a gag about the Italian for a custard pudding which roughly translates as ‘English bore’.

Below, they wrote: ‘Southgate needs the help of the referee to reach the final against Italy.’ 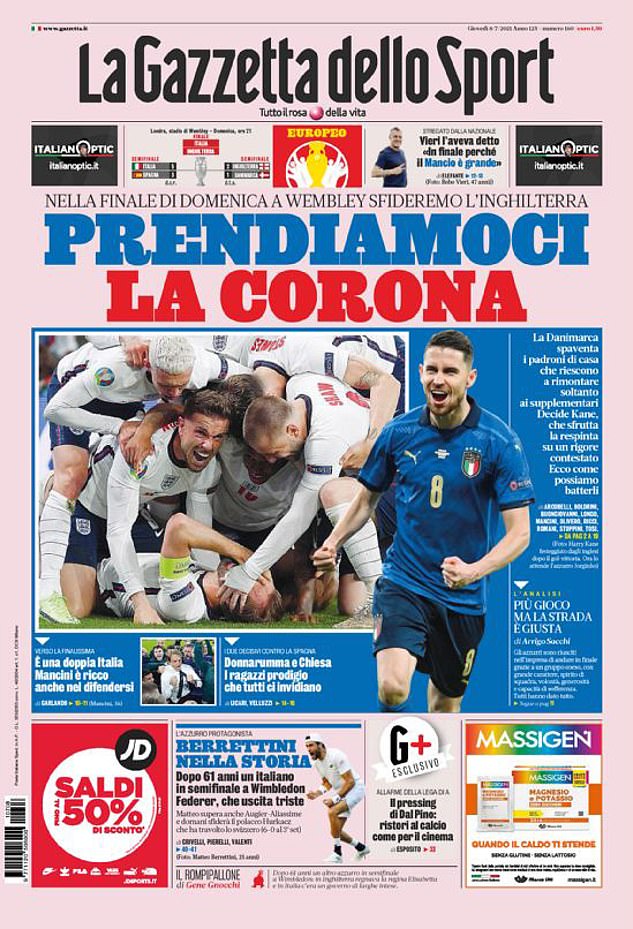 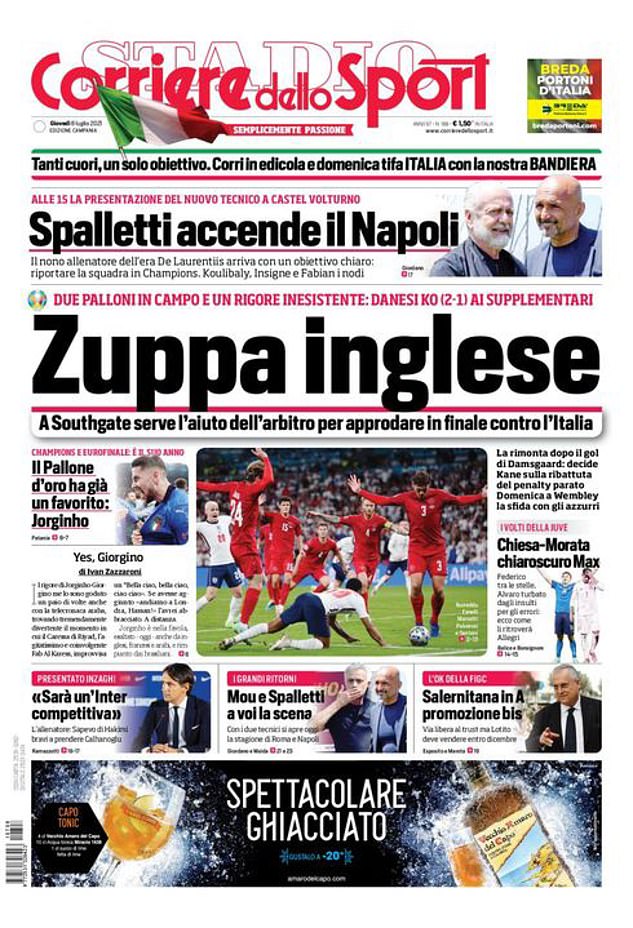 In the popular Italian newspaper Corriere dello Sport, Thursday’s headline makes a gag about the Italian for a custard pudding which roughly translates as ‘English bore’

Danish media hit out at refereeing decisions and ‘cowardly tricks’ on Thursday,  claiming it cost them a place in the Euros final.

‘There was no penalty’ ran a headline in one of the country’s biggest newspapers Berlingske.

Meanwhile tabloid Ekstra Bladet attacked the ‘disgusting and cowardly trick’ by an England fan who shone a laser at Kasper Schmeichel as Kane lined up his shot. 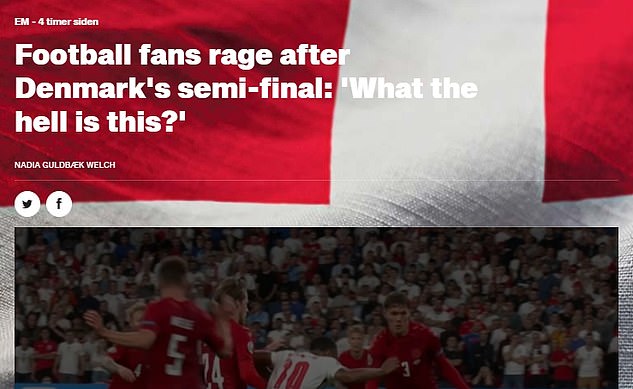 Newspaper B.T. shared fan reaction to the match, including plenty of fury directed at Dutch referee Danny Makkelie who awarded an injury-time penalty to England 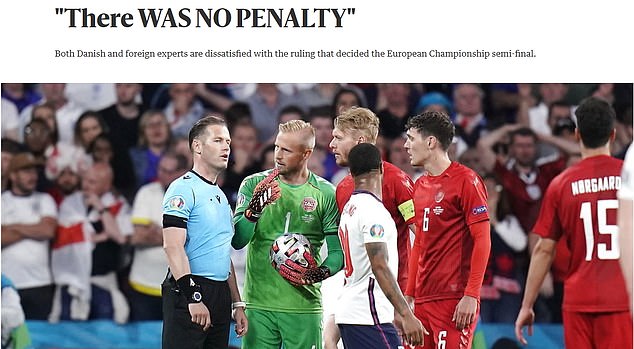 Berlingske also dedicated an entire article to arguing that Sterling’s penalty should not have been given, saying Denmark were robbed of victory 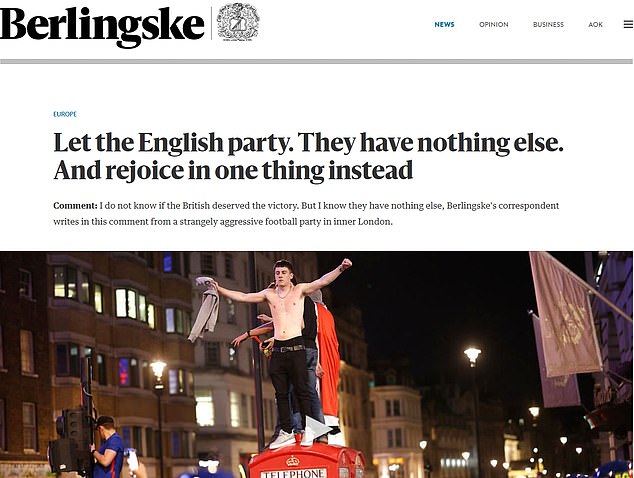 In one incredibly bitter take on last night’s football result, one Danish newspaper insisted readers were lucky not to live in the UK because of its ‘poor’ leadership and Covid deaths

And, in one particularly scathing dispatch from street parties in London, journalist Poul Hoi attacked Britain’s ‘poor’ leadership and Covid death toll as evidence that readers are ‘lucky’ to live in Denmark – football result aside.

‘Let the English party,’ he wrote bluntly. ‘They have nothing else.

Describing scenes of drunken jubilation in the British capital following the win, he added: ‘It is no coincidence that the third wave began in the British Isles and that it is so much more dramatic than elsewhere.

‘Nor is it God’s random punishment that the country has the most corona deaths in Europe. It could have been avoided… but it was not avoided because the leadership is too “poor.”

‘And the corona fad is not an exception, but characteristic of a country that is so convinced of its exceptionalism that it even thinks itself exempt from a pandemic.’

He concluded ‘Let them party… And instead rejoice that you have woken up in Denmark today.’ 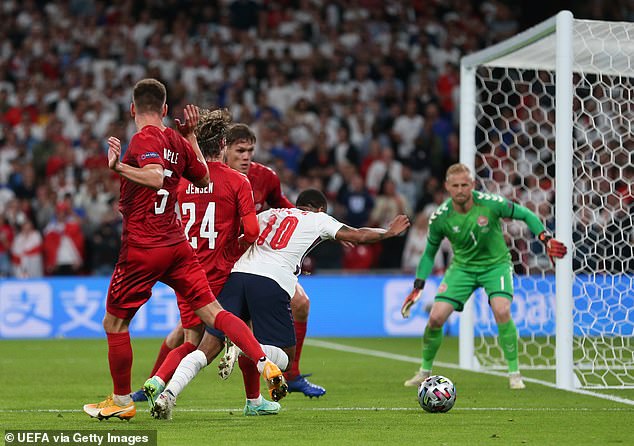 Southgate’s side arguably faced their biggest challenge of the tournament so far against the Danes, who took the lead at Wembley through Mikkel Damsgaard’s sensational free-kick, only for Simon Kjaer to score an own goal after good work from Kane and Bukayo Saka.

The extra-time penalty caused a stir among the football community, with a petition created to get the match replayed due to the controversial spot kick call.

Meanwhile, former Denmark goalkeeper Peter Schmeichel, along with ex-Premier League bosses Jose Mourinho and Arsene Wenger, all claimed the penalty should not have been given.

Speaking about referee Makkelie, Schmeichel told beIN Sports: ‘He made a really big mistake on the penalty and this will be debated for a long, long time.

‘It’s a hard one to take because it’s not a penalty. 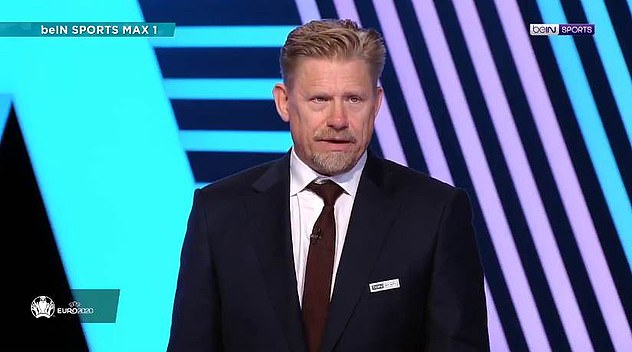 ‘I would have been much more relaxed and accepting if they had scored one of the many chances that they created but unfortunately the referee made a big mistake in my opinion.

‘I know in your opinion (points at other pundits in the studio) and everyone’s opinion, my phone has not stopped going off, everyone else is saying it’s not a penalty so I’m quite sure that I am (right in saying that)’.

‘The best team won, England deserved to win, England was fantastic but for me it was never a penalty.

“Especially at this level, the semi-final of a Euro. I don’t understand the decision.”

José Mourinho says England should NOT have been given their penalty v Denmark. pic.twitter.com/MKiEYk6K12

‘For me it’s never a penalty. Not with Vestergaard and not with the second defender.

‘No penalty,’ Wenger said on beIN SPORTS. ‘I don’t understand why they don’t ask the referee to have a look at it. 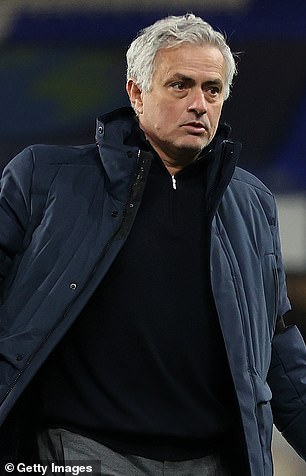 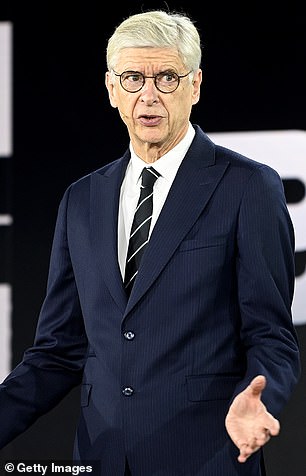 ‘In a moment like that, it’s important that the referee is absolutely convinced that it was a penalty. It was not clear enough to say: ‘yes it is,’ and at least he should have had a look on the screen.

‘I don’t know why the VAR didn’t ask him to go. For me, it was no penalty, no. I think that VAR has let the referee down, not Denmark. Denmark is a bit unfortunate.

‘I understand that it’s difficult for the referee, but he must have a look at it.’