A ‘Spiderman’ shoplifting suspect clambered into the rafters at an Asda supermarket in an attempt to avoid being arrested.

Footage filmed at the supermarket in George Street, Walsall, shows a man high above shoppers and workers yesterday afternoon.

In the video, filmed by witness Ryan Rogan, onlookers on the ground could be heard shouting ‘get out the way’ and ‘where’s the coppers’ as he shuffles across the lighting and stands on pipework. 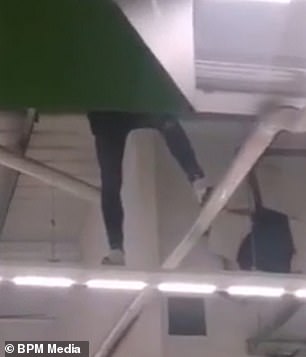 A ‘Spiderman’ shopping suspect climbed onto the rafters at an Asda supermarket in Wallsall, West Midlands. Footage shows the man shuffling across lightning and standing on pipework

The 19-year-old witness said: ‘I heard a bang on the wall and then suddenly I saw two feet come through the wall.

‘I was a bit scared. He stood on the gas pipe and I was beneath it. The staff were telling him to get down and panicking.’

Police arrested an 18-year-old man on suspicion of shoplifting and criminal damage who remains in custody.

A spokesman for West Midlands Police said: ‘We were called to reports that security staff had detained a suspected shoplifter at Asda on George Street in Walsall just before 3.45pm yesterday. 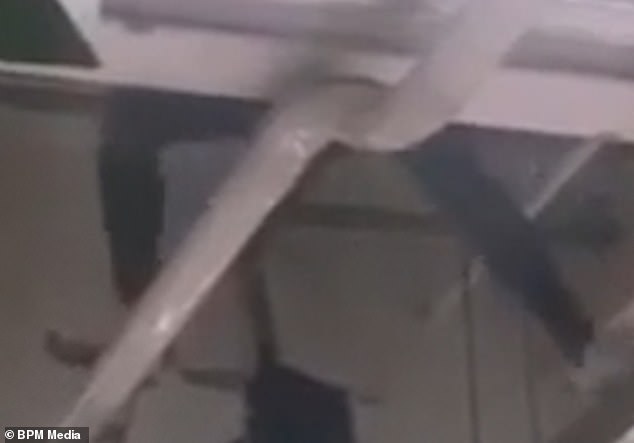 West Midlands Police said the shoplifting suspect climbed a pillar before clambering onto the rafter on Friday afternoon. An 18-year-old man was arrested and remains in custody

‘Before officers arrived, a suspect climbed a pillar and made his way on to lights in the ceiling of the store.

‘An 18-year-old man was arrested on suspicion of shoplifting and criminal damage and remains in custody today.’

A spokeswoman for Asda told MailOnline: ‘We are assisting the police with their inquiries and would like to apologies to our customers for any inconvenience.’