A black CNN reporter was arrested live on air on Friday morning by Minnesota State Patrol while reporting on the killing of George Floyd, a black man who died after a Minneapolis police officer knelt on his neck for nine minutes.

CNN correspondent Omar Jimenez was put in handcuffs and led away from his team of producers this morning shortly before 6.30am after the team was moved down the street by police in riot gear.

At 6.11am EST on Friday, CNN reporter Omar Jimenez was arrested live on air by Minnesota State police for apparently refusing to move when he’d been told to despite being heard on camera telling the cops ‘tell us where you want us to go, we’ll go wherever you want.’ Other reporters at the scene who are white say they were allowed to stay without incident

Jimenez told them they were live on air and was put in handcuffs.

Two of his colleagues from the same team were also arrested and the three are now in custody.

Other reporters from different networks reported from the scene this morning without incident.

CNN’s Josh Campell for example said he was there but was not on camera.

‘I identified myself … they said, ‘OK, you’re permitted to be in the area. I was treated much differently than (Jimenez) was.’

Jimenez and his team have been released.

After being released, Jimenez returned to the air. He said: ‘Everyone was pretty cordial.

‘I said to the officer who arrested me, “look, we’re going to be here for the next few days. Where do you want us to be?” And he said “I don’t know, I’m just following orders.”

‘There was no animosity. No one was violent with me,’ he said.

‘That conversation may have happened above some of the people we were with. For us, they came back and said: “You’re with CNN, correct?” 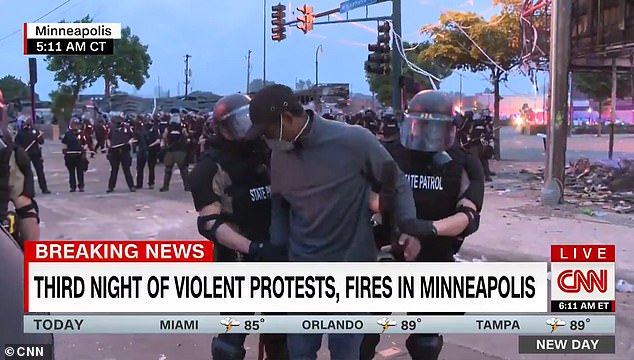 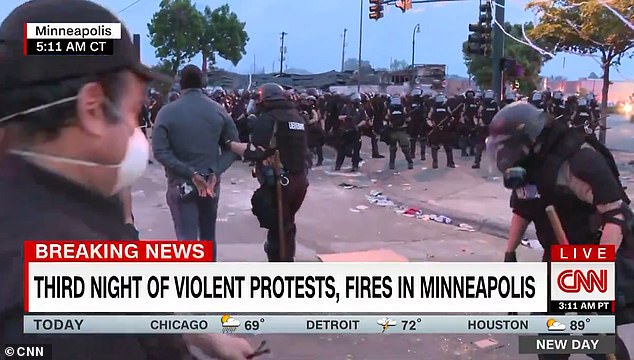 The crew’s films kept rolling as Jimenez was led away. The cops said they were arrested for not moving on

‘They let us out of the van, we were handcuffed in the van, then they came back with our belongings. They unclipped our handcuffed. That is when we were let out.

‘There was no sort of, “sorry this was a misunderstanding.” It seemed like this conversation might have happened but it didn’t happen with us,’ he said.

‘The arrest happened, I was trying to communicate with you all. I couldn’t really understand what was going on but as we were walking away… it did cross my mind that what is really happening here?

‘The one thing that gave me a little bit of comfort was that it happened on live TV.

ABC’s Gabe Guttierez was also able to film a segment in front of a group of state patrol officers. 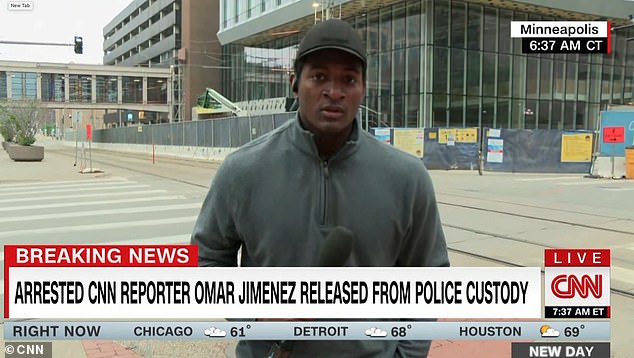 Jimenez was released shortly after around 90 minutes and returned to the air. He said no one had been violent towards him and all the cops were ‘cordial’

The protests in Minneapolis raged on Thursday night for a third night in a row as Floyd’s death continued to shock the world.

The 46-year-old man was killed on Monday at 8pm for allegedly using a fake $20 bill to pay for goods at a store.

He pleaded for breath, saying he could not breathe, but Derek Chauvin, the officer, refused to remove his knee from the man’s neck while a crowd gathered.

Chauvin has since been fired but there are mounting calls for him to be charged with Floyd’s death.

The president on Thursday said he’d instructed the FBI and Justice Department to investigate his death.

Trump inflamed tensions by tweeting on Friday: ‘When the looting starts, the shooting starts.’

Twitter censored the tweet, making it only visible to people who clicked on it after a warning.