Black conservative activist Candace Owens told Congress that white nationalism and white supremacy are not a problem for minorities in America.

Owens was invited to testify in front of the House Oversight Joint Subcommittee on Friday to discuss combating white supremacy.

She said: ‘If we’re going to have a hearing on white supremacy, we are assuming that the biggest victims of that are minority Americans and presumably this hearing would be to stop that and preserve the lives of minority Americans.’

‘Which based on the hierarchy of what’s impacting minority Americans, if I had to make a list of 100 things, white nationalism would not make the list.’

Candace Owens (pictured) testified in a hearing on white nationalism on Friday, September 20

Owens then proceeds to list issues she believes are more immediately pressing, including black on black crime, abortion, illegal immigration and the democrats attack on masculinity.

‘We don’t see hearings on those bigger issues… the inner city communities which is a huge issue, black on black crime. The breakdown of the family I think is the number one thing contributing to that,’ she said.

‘We never hear anyone talking about what happens when you remove a father from the home. In fact, I would argue that right now we have a social environment that is hostile towards men.’

Later during the hearing Owens summarized her position on the matter by saying: ‘White supremacy and white nationalism is not a problem that is harming black America.’ 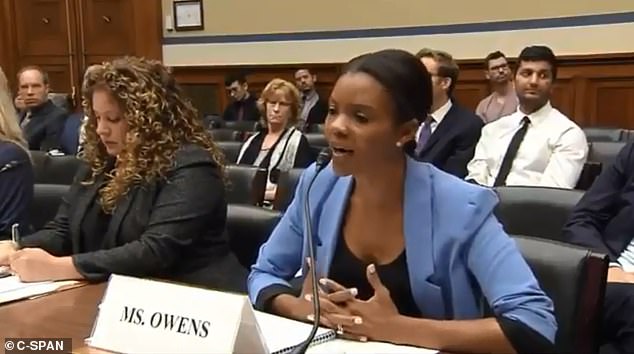 Owens: ‘White supremacy and white nationalism is not a problem that is harming black America’

Rep. Jim Jordan (R-OH) ceded all his time to Owens, who had been ignored by Democrats throughout the majority of the proceedings.

She said: ‘I also found it quite hilarious that when asked for actual numbers, nobody here could actually provide them because it’s not actually a problem in America or a major problem that’s facing black America.’

Owens told the subcommittee that African Americans had a higher chance of being struck by lightning than being shot by police in 2016. 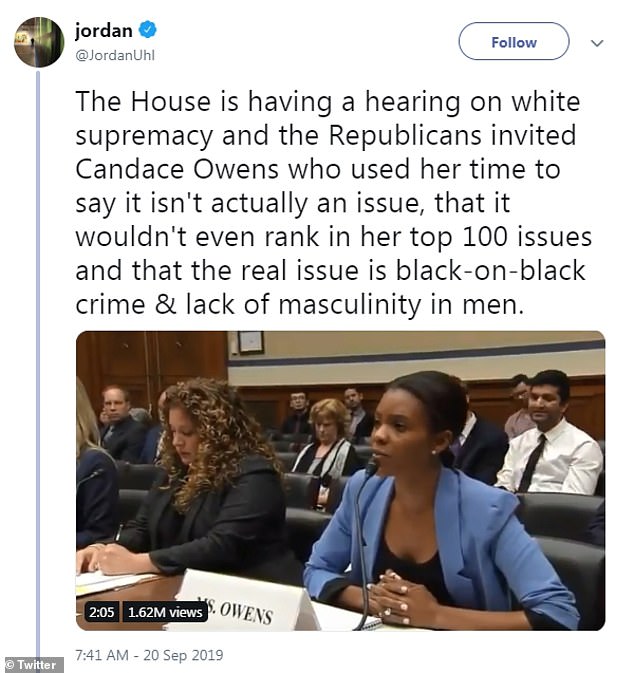 Fellow Panelist Dr. Kathleen Belew, a professor and historian who has researched the rise of the white power movement, pushed back against Owens for shrugging off current research on the subject.

‘I object strenuously to your use of the word hilarious. To me, this feels a lot like your reaction to being named in one of these manifestos.’

‘Now, you’re of course not responsible for the words of someone writing that document, but I do think laughing at it is a real problem.’

Belew was referring to when Owens tweeted ‘LOL’ after being named in the Christchurch shooter’s manifesto.

Owens fired back at Belew, calling her a ‘made-up professor.’ 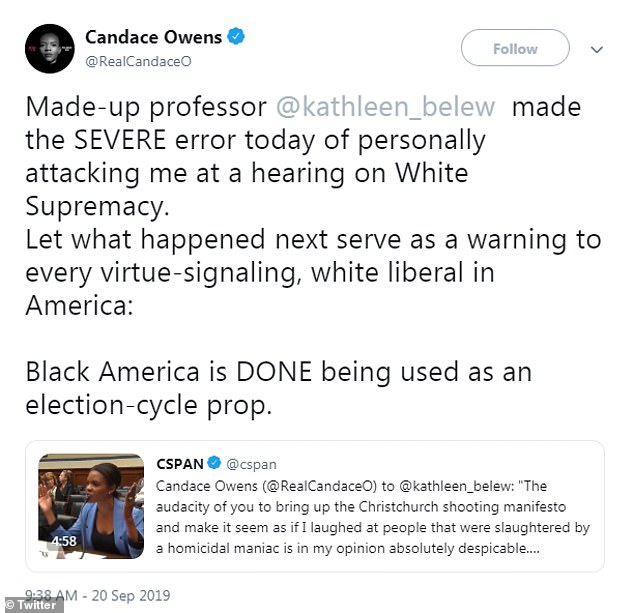 Owens: ‘Made-up professor @kathleen_belew made the SEVERE error today of personally attacking me at a hearing on White Supremacy’

The Anti-Defamation League’s Center on Extremism reports that ‘white supremacists and other far-right extremists were responsible for 59 percent of all extremist-related fatalities in the U.S. in 2017, up dramatically from 20 percent in 2016.

Owens comments come off the heels of a string of controversial statements over the past year.

In June, Owens said African Americans were better off during the first 100 years after slavery.

She said:  ‘You know in our community after the first 100 years—doctor, doctor, come on—100 years after slavery, the black community was doing better.’

That timeline would include the Jim Crow era and predate the Civil Rights Act. 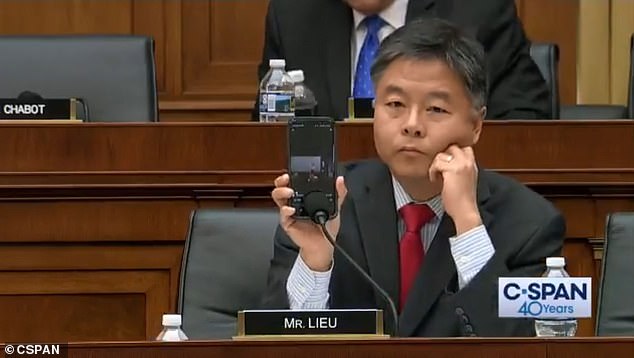 In April of 2019, Rep. Lieu (pictured) played an audio clip of Owens talking about white nationalism and Adolf Hitler 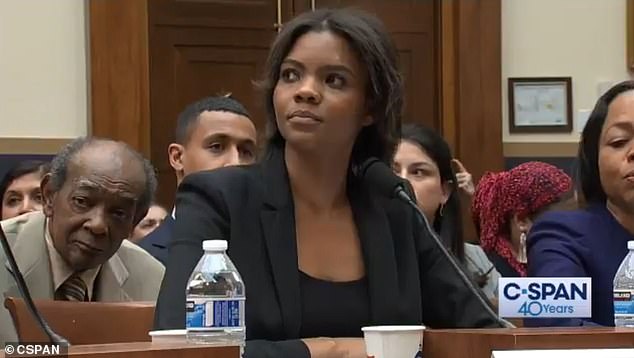 Owens: ‘You know, he was a National Socialist, but if Hitler just wanted to make Germany great and have things run well, okay fine’

Owens publicly called the GOP’s Southern Strategy a ‘myth’ in April and in the same month went head to head with Rep. Ted Lieu (D-CA).

In the viral confrontation, Rep. Lieu played a recording of Owens of her talking about white nationalism and Adolf Hitler.

She said: ‘You know, he was a National Socialist, but if Hitler just wanted to make Germany great and have things run well, okay fine.’

‘The problem is he had dreams outside of Germany. He wanted to globalize. He wanted everybody to be German.’