When ex-Tory Minister Andrew Mitchell discovered he was the victim of a ‘sting’ by an undercover reporter posing as Chinese businesswoman ‘Fei Liu’, he wrote her a furious reply – in Mandarin.

Translated, it said: ‘Dear Fei, I know exactly what dastardly game you are up to, pack it up or I’ll call the Old Bill!’

As the clock ticked down to a Burns Night supper at Downing Street, Theresa May became so fretful about how to wear the traditional ladies’ tartan sash that she Googled the rules.

‘She was about to sling it over her left shoulder until she discovered that meant the “Chieftain’s Wife”,’ Dog is told.

‘So she put it over her right shoulder to look more commanding.’

It will take more than that to quell her increasingly rebellious tribe. 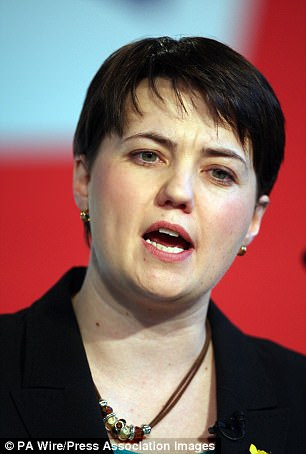 Ruth Davidson is stepping up her one-woman war on Boris Johnson, using a cheeky Burns reference to refer to the Foreign Secretary

Referring to Burns’s philandering reputation, she cheekily called him ‘the Boris of his day.’

Burns reputedly sired over a dozen bairns, a tad high even by BoJo’s standards.

Mrs May is so fed up with Boris’s madcap antics that her No 10 officials now have a special file for the Foreign Secretary.

Marked simply ‘Boris’, it contains details of his off-message manoeuvrings and suggested put-downs by Theresa May.

Dog suspects the file will only grow fatter over the coming weeks.

Moscow’s mockery of the risible claim by Defence Secretary Gavin Williamson that Russia could kill thousands of Britons by targeting energy supplies prompted guffaws at the MoD.

Williamson – dubbed ‘Private Pike’ by his enemies – was called ‘Wilson’ by the Kremlin.

‘They’ve given him a promotion,’ said one brass hat. Wilson was, of course, a sergeant.

Labour can’t find anyone to sell Corbyn to the people.

Their director of communications post is having to be re-advertised – despite a £66,000 salary.

‘The advert should say, “Must be able to polish a t**d”,’ said one tart anti-Corbynista.

Unionist calls for a fixed link between Northern Ireland and the mainland led to confusion in No 10.

An aide asked DUP deputy leader Nigel Dodds: ‘What’s all this about you lot wanting a road tunnel to Scotland?’

Dodds replied archly: ‘No, not a tunnel – a bridge. Tunnels are what the other lot do.’

In the 1990s, IRA prisoners tried to escape from the Maze prison by digging 40ft under the wall.

He recalled being at a Tory rally as a teenager when then-Welsh Secretary John Redwood famously faked singing the principality’s national anthem in 1991.