In a clash described as a ‘joke’ by spectators, Hodges ended his bout with Troy McMahon with a mere five punches, drawing boos from the crowd.

But the final clash of the night was more rewarding, with Tim Tszyu taking down Joel Camilleri to win the Australian super-welterweight title.

After beating Camilleri at Sydney’s Star Casino on Wednesday night, the son of boxing legend Kostya Tszyu now has his sights set on going toe to toe with Jeff Horn.

It was only Tszyu’s 13th fight, but he managed to gain momentum and land his heavy hands in the middle rounds against Camilleri’s constant movement. 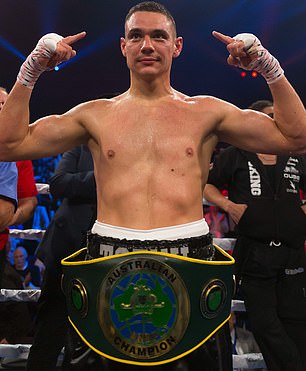 The 24-year-old son of boxing legend Kostya Tszyu has now set his sights on a match up against Jeff Horn, and even picked holes in the former world champion’s technique

Tszyu became more and more dominant as the fight went into the later rounds, and picked off Camilleri, who suffered his sixth loss in 24 starts.

The 24-year-old now has Jeff Horn on his radar, and even picked holes in the former world champion’s technique.

‘Hopefully we can meet in an all Australian superfight. It’s a fight that I believe I can win,’  he said, the Daily Telegraph reported.

‘Horn is a very strong, rugged fighter. But I see a lot of flaws in his boxing and I believe I can capitalie on the flaws and get the victory.’

Former school teacher-turned-pro boxer Horn had some choice words for Tszyu in response, saying he’s got a lot of homework to do before stepping into the ring with him.

‘I definitely see myself taking care of Tim Tszyu at this stage. I don’t think Tim’s ready for me and I’ve still got big fish to fry. But if it’s a fight that people want to see and it sells, I’ll gladly fight him,’ Horn said.

‘Good on him for calling me out. He’s got the surname but it’s yet to be proven that he’s got the talent of his father. It’s a hard name to live up to.’ 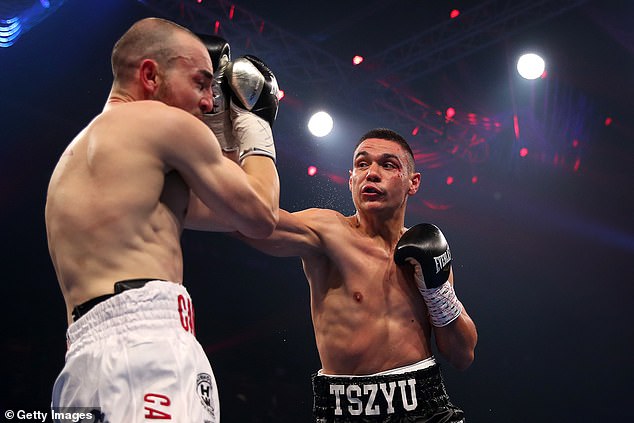 Tszyu became more and more dominant as the fight went into the later rounds, and picked off Camilleri, who suffered his sixth loss in 24 starts

Earlier in the night it took Justin Hodges less than 30 seconds to knock out Troy McMahon.

It was only Hodges’ second time in the ring, but an overhand right that grazed McMahon’s temple was the beginning of the end.

McMahon stumbled backwards into the ropes, before the former footy star landed a few more hits and finished McMahon with an uppercut right.

Fans were left reeling after the dismal fight, with the crowd booing when Hodges’ hand was raised.

They took to Twitter to air their frustrations with the short-lived fight.

‘What a disgrace… Hodges was better off staying home,’ one user wrote.

‘This is an embarrassment to boxing, did they drag Justin Hodges’ opponent from the local Maccas car park?’ another quipped.

‘There’s no other way to chop that up. That’s absolutely outrageous. That bloke fighting Hodges had no business in there; and the NSW boxing commission better have a good look at themselves,’ said another angry fan.

Fans were left reeling after the dismal fight, with the crowd booing when Hodges’ hand was raised