Black Friday FAKES: Learn how to avoid counterfeit goods with our guide

Locked away inside a glass display cabinet are a Rolex watch, a bottle of Chanel perfume and a glitzy pair of pink ghd hair straighteners.

There are also some headphones, Nike trainers, a Batman outfit still in its plastic wrapping and even a Rubik’s cube.

This may sound a rather bizarre mix of items, but they do have one thing in common — they are all fakes that have been seized by the police.

Buyer beware: Amelia and her copycat designer purchases – see table below to find out how much they cost

I’ve come to the City of London Police headquarters to speak to Detective Inspector Kevin Ives about the rising problem of counterfeit goods — and find out how shoppers can avoid them. 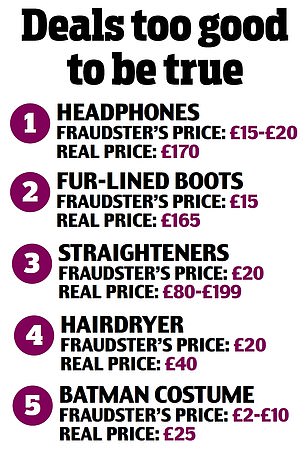 The Police Intellectual Property Crime Unit (Pipcu) office is tucked away down a narrow side street in central London.

Over the past six years the department, which employs 24 staff, has tracked down and removed some 92,000 websites set up to sell fakes.

These days it is taking down around 2,000 every month. And, as the display cabinet illustrates, there is nothing crooks won’t try to copy.

DI Ives says: ‘Anything criminals can produce cheaply and sell for a premium will be faked.’

Fraudsters are also keenly aware of peak shopping times, so with Christmas just around the corner and Black Friday fast approaching, they will be ramping up their activities, he warns.

It comes as a study by consumer group Which? this week warned that 95 per cent of Black Friday ‘bargains’ were not what they seemed, as they were actually cheaper before or after the sale.

Counterfeit goods are typically made in the Far East, according to DI Ives. They are then shipped in bulk to the UK and taken to warehouses before being distributed.

Around 20 million illegal products have been seized by local trading standards as they entered the UK in the past 12 months.

However, it can be hard to catch all items because they may not be counterfeits when they arrive in the country.

‘But they are then taken to a warehouse and printed, say, with a big Nike swoosh, and that is when they become imitation goods.’

In the past, shoppers would largely stumble across counterfeit goods in markets or while on holiday abroad.

Some parts of the UK, such as Strangeways in inner north Manchester, still have shops that are known to sell fakes, according to DI Ives.

But the bulk of counterfeit goods are now sold online, with fraudsters setting up new websites all the time to sell anything from imitation hairdryers to pet accessories.

It is illegal to sell counterfeit goods in the UK. And it is a criminal offence to try to gain financially by using a trademark without the owner’s permission.

Pipcu has a computer system set up to flag up suspicious sites.

They also receive tip-offs from other law enforcement organisations around the country, as well as the companies behind the brands being impersonated.

They then work with website providers to get them taken down. Given the sheer volume of rogue sites reported, this can take three to four weeks.

Shoppers can stumble across these sites when using search engines such as Google when browsing online.

My ‘Dyson’ was a cheap fan from China

Cerys Traylor bought what she thought was a Dyson hairdryer in August last year after spotting a good deal on Facebook.

The hairdryer, which usually retails at £300, was being advertised for just £50.

Cerys, 28, says she was suspicious about the price but thought there was no harm in clicking through to the website to find out more. The site looked official and was heavily branded with the Dyson logo. 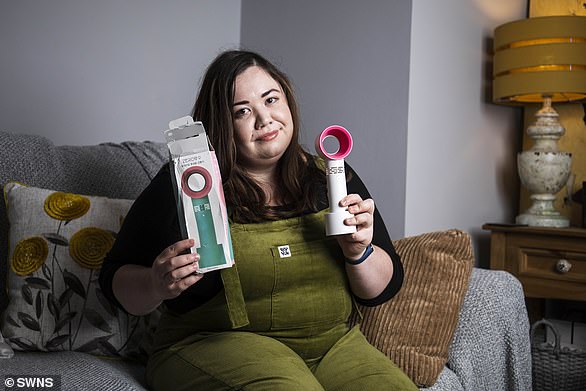 Cerys Traylor bought what she thought was a Dyson hairdryer which usually retails at £300, for just £50

A number of glowing reviews were featured on the site, which she now believes to be fake. Cerys, who works in marketing, was also reassured by the fact she could pay using her PayPal account.

PayPal’s buyer protection covers customers in the event the item does not arrive or is not as described.

Six weeks later a package arrived from China containing not a hairdryer but a USB fan.

There was no delivery note or receipt so Cerys reported the matter to PayPal, which, fortunately, refunded her a few weeks later.

The website disappeared but Cerys found other customers online who had been scammed in a similar way.

She says: ‘I like to think I’m savvy, but I was had. I see adverts on Facebook for similar sites all the time.

The other day I saw an advert for cashmere joggers for $9 (£7). There is no way they were real. There are going to be loads of fake deals like this ahead of Christmas.’

Cerys, from Yate, South Gloucestershire, says she now sticks to brands she knows, uses secure websites and pays via PayPal.

Websites selling counterfeit goods can be hard to spot as they often look professional and use the logos of well-known brands.

The main giveaway is usually that the prices are heavily discounted. You are also unlikely to find a UK address or returns policy on the website.

Tom Clementson, of secure payments solution Shieldpay, says they are so sophisticated that even the experts can be fooled.

‘Be wary of websites with addresses that don’t start with ‘https’ or which end in ‘.net’ or ‘.org’,’ he says.

‘Genuine websites will have reviews from past customers. But you can spot the holes here, too, so look out for consistent spelling errors, repeat appearances from the same ‘individual’ or reviews that sound like an advert rather than an objective opinion.’

Some fraudsters are also able to get through strict checks by online marketplaces such as eBay, Amazon and Wish, and use these websites to sell their fake wares.

Shoppers should, again, be wary when buying goods for far less than their retail value and check the seller’s history and ratings.

Hairdryers that are fire hazards

Popular trainers such as Nike Air Max are one of the most common counterfeit items sold, according to DI Ives.

However, while a real pair of these trainers may cost, say, £150 on the High Street, crooks will sell their imitations for £40 or £50.

Branded clothing and accessories, such as bags, belts and jewellery, are also copied, produced en masse and sold on the cheap. 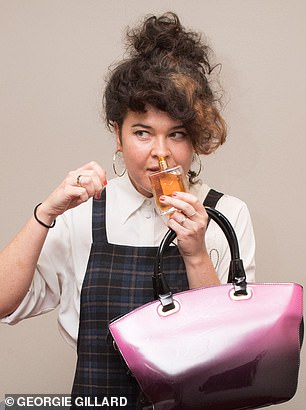 Iffy niffy: Amelia takes a whiff of some counterfeit cologne

DI Ives says: ‘The criminals know what is popular at the time and will undercut the cost significantly.’

Counterfeit goods are typically poor quality so look out for bad stitching and cheap materials.

If you are buying designer goods, check for product details on labels, such as serial numbers, that may authenticate the item.

For example, since 1984 Chanel bags have come with authenticity cards and have codes that indicate the model and year of manufacturer.

If you contact the firm’s customer service department, they should be able to confirm if a bag is genuine.

Meanwhile, a third of gold jewellery sold online is suspected to be bogus, according to an investigation by the British Hallmarking Council.

In the UK, jewellery above a certain weight cannot be sold as gold or other precious metals without a hallmark.

This is an official mark, or series of marks, on metal to certify its purity. It is usually stamped on the inside of a ring or by the clasp on chains and bracelets.

Yet around 36 per cent of 17,657 online listings did not advertise jewellery as hallmarked, the research found. Of those listings, an estimated 4,278 were believed to be fake.

Many of these items were listed for sale on online marketplaces such as eBay and Amazon.

Out of 15 items bought from Amazon, eBay and Wish, 14 did not meet the UK standard when tested by the charity.

One hairdryer emitted flames when tested, while a heated comb posed a fire risk because of a non-compliant plug that would be illegal in the UK.

Martyn Allen, technical director of Electrical Safety First, says: ‘The results of our tests are extremely worrying for those who buy electrical products from online marketplaces. No product that fails our tests should be being sold.

‘If you’re buying an electrical item, stick to a reputable retailer you trust; and if you spot any safety concerns, stop using it and contact the manufacturer. Buyers need to beware.’

Amazon, Ebay and Wish all removed the listings when alerted.

An Amazon spokesman says: ‘We have developed industry-leading tools to prevent unsafe or non- compliant products from being listed in our stores.’

A eBay spokesman says it takes a number of measures to stop unsafe products from being listed, including the use of algorithms, and eBay has its own security team. 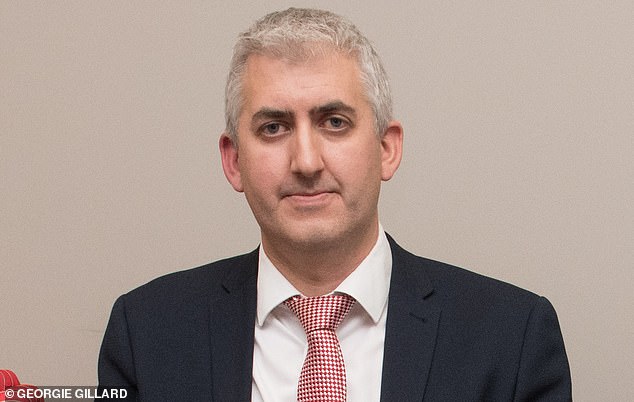 Detective Inspector Kevin Ives of the The Police Intellectual Property Crime Unit which takes down around 2,000 websites selling fake goods every month

Counterfeit cosmetics can also be highly dangerous because they have been found to include chemicals such as hydroquinone — described as the biological equivalent of paint stripper — which can cause liver, nerve and foetal harm and increase the risk of skin cancer.

Bootleg make-up is often sold on websites designed to look like a third-party supplier, or on online marketplaces.

Last year a local council uncovered a tanning salon in Cheshire selling more than £100,000 of fake designer products including MAC and Chanel make-up.

Look out for poor quality packaging, spelling mistakes in branding and uneven fonts on labels. The make-up is also likely to feel of a poorer quality.

You will only know for sure that what you are buying is genuine if you buy from an authorised retailer.

Crooks will sell your data, too

DI Ives says: ‘The first are totally unaware and believe they are purchasing the real thing. The second may think something is a bit off, but buy the items anyway, usually because they are cheap.’

However, anyone can be caught out by so-called purchase scams, where you think you are buying one thing and either another item turns up or nothing arrives at all.

Four in ten over-60s have been tricked by this type of scam, according to Santander, and more than 82 per cent of under-30s. The average loss is £625, its research found.

But as well as the initial outlay, shoppers should also be aware that if they enter their details into a website run by crooks, this data is routinely sold on.

When you buy something online you are typically required to provide your name, address and bank details. This is a goldmine of information for fraudsters looking to steal your identity or trick you into handing over money.

In one case, an individual had more than 600 websites set up in their name after buying a counterfeit product online.

It means that if police discover the fake websites, they will think you are the one behind them because your details are registered.

The crooks behind these fake websites are also often using the money to fund serious crime such as drug trafficking and terrorism.