Black Friday fever has spread across the world with carnage breaking out in stores and shoppers clambering over each other to snap up deals.

Scuffles broke out amid chaotic scenes at one store in Sao Paulo, Brazil, where crowds of bargain hunters scrambled to get their hands on cheap televisions.

The clip was reportedly captured at ‘game’ in Baywest Mall, Port Elizabeth, as its metal shutters were opened for the day.

A separate video shot at an unknown location in South Africa shows an armed guard patrolling a mall as crowds descend on a shop. A man can be seen desperately trying to beat queues by scrambling over a metal barrier.

Bargain hunters: There was a frantic dash for discounted televisions at a department store in Sao Paulo, Brazil 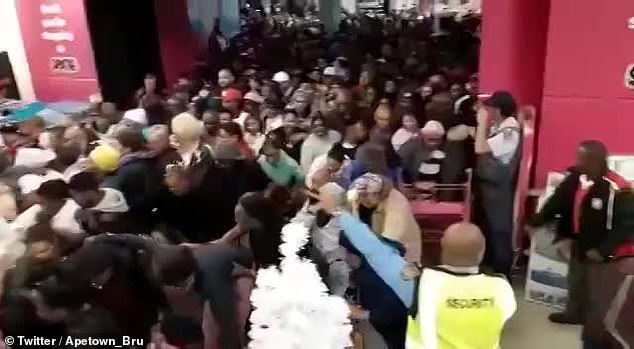 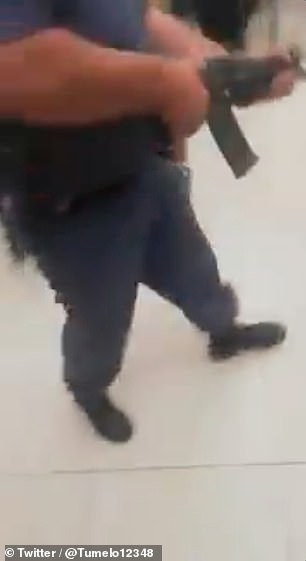 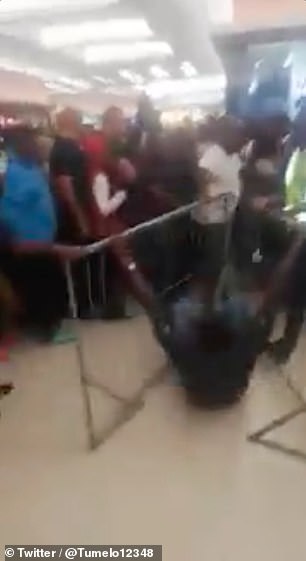 A separate video believed to have been captured at an unknown location in South Africa shows an armed guard (left) patrolling a mall as crowds descend on a shop. A man can be seen desperately trying to beat queues by scrambling over a metal barrier (right) 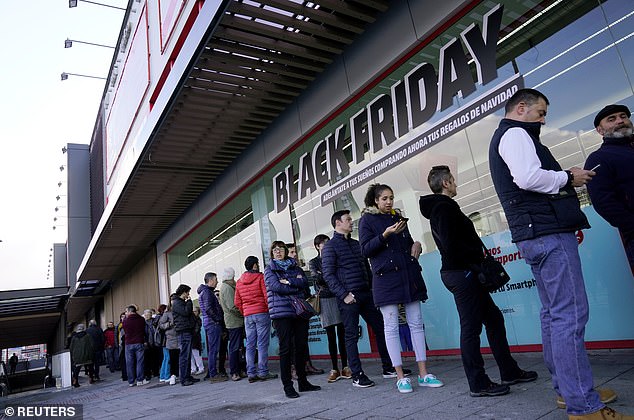 This was the scene as shoppers in Bilbao, Spain waited to take advantage of Black Friday sales today

In the US, a teenager was killed and two others injured following a shooting at an Alabama shopping centre prior to Black Friday shopping.

Authorities say the shooting happened about 9.30pm local time on Thursday at the Riverchase Galleria in Hoover, a nearby suburb of Birmingham.

Police say a fight between two teenagers, including an 18-year-old, resulted in an exchange of gunfire. One teenager fled but was confronted by two Hoover police officers.

Captain Gregg Rector said at a news conference that a Hoover officer ‘did engage that individual, shot him and he is dead on the scene’.

The second teenager was taken to hospital and is in a serious condition. Police said a 12-year-old girl also struck by gunfire was in hospital.

Black Friday, the day after the Thanksgiving holiday, was so named because spending in the United States would surge and retailers would traditionally begin to turn a profit for the year – moving from the red into the black. It falls on November 23 this year. 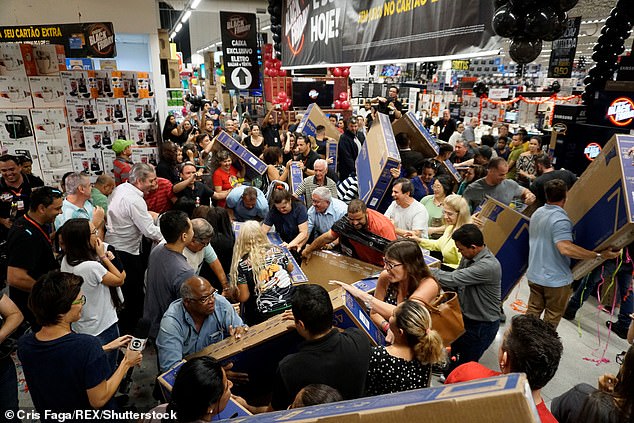 Desperate shoppers in Sao Paulo, Brazil scrambled to get their hands on discounted televisions

Naysayers argue the discounts suck forward Christmas sales that could otherwise be made at full price and can dampen business in subsequent weeks.

Meanwhile, Britain’s retailers are hoping Black Friday discounts will get shoppers spending again after a torrid year for much of the sector.

A string of store groups have gone out of business or announced shop closures this year as they battle subdued consumer spending, rising labour costs, higher business property taxes, growing online competition and uncertainty over Brexit.

Toys R Us UK, Maplin and Poundworld have all gone bust, while Marks & Spencer, Debenhams, Mothercare and House of Fraser are between them shutting hundreds of stores.