Black Friday kicks off around the world

Eager Black Friday shoppers are rushing into stores around the world to snap up bargains as the festive shopping season begins.

The shopping frenzy, which originates in the United States where it marks the day after Thanksgiving, has taken off in Europe where customers browsed the aisles in Britain, France and Germany this morning.

Some shoppers began their bargain hunting early, including in Brazil where customers were seen rushing to get their hands on Samsung ultra high-definition TVs.

There were also frenzied scenes in South Africa where some shoppers had to take refuge from a doorway bundle, and in Uganda where one woman was seemingly taken away on a stretcher.

However, there has also been opposition to the spread of the shopping spree, including in France where activists blocked an Amazon warehouse south of Paris yesterday and lawmakers are considering a ban.

Amazon workers are on strike in Germany and a protest declaring that ‘consumerism equals climate crisis’ was hung up in Madrid. 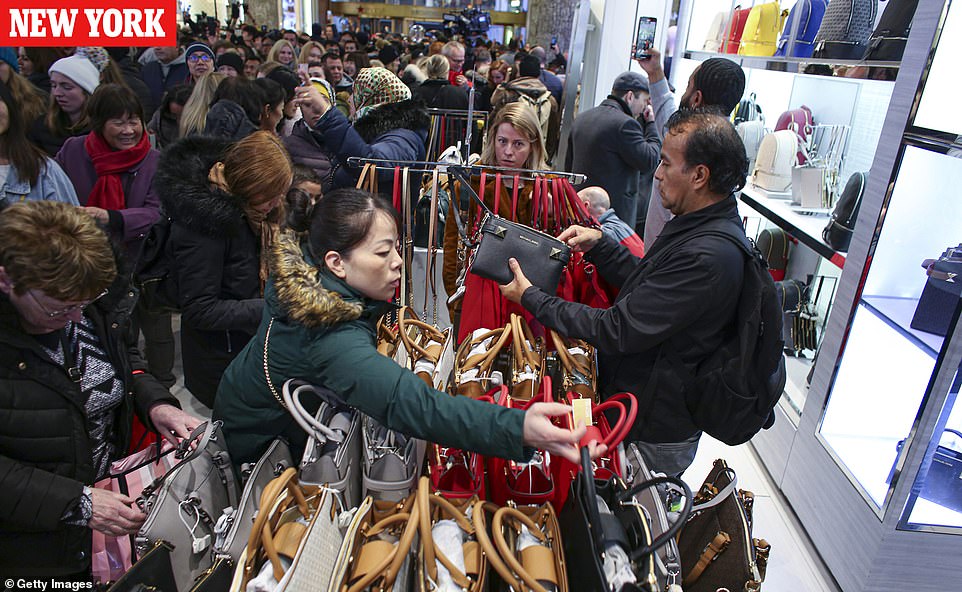 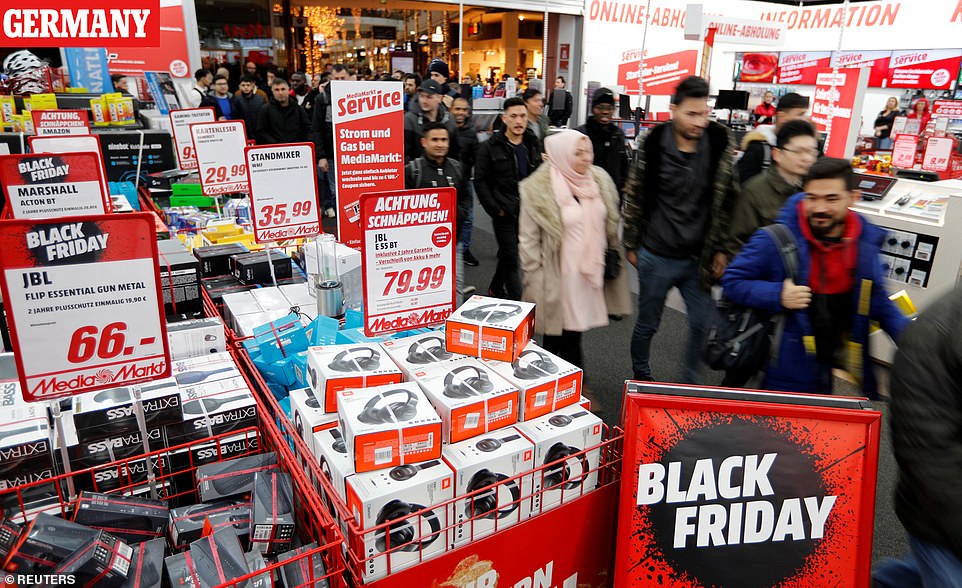 The Black Friday craze has also made it to Germany, where people are seen shopping at electronics retailer Media Markt near the Alexanderplatz in Berlin this morning 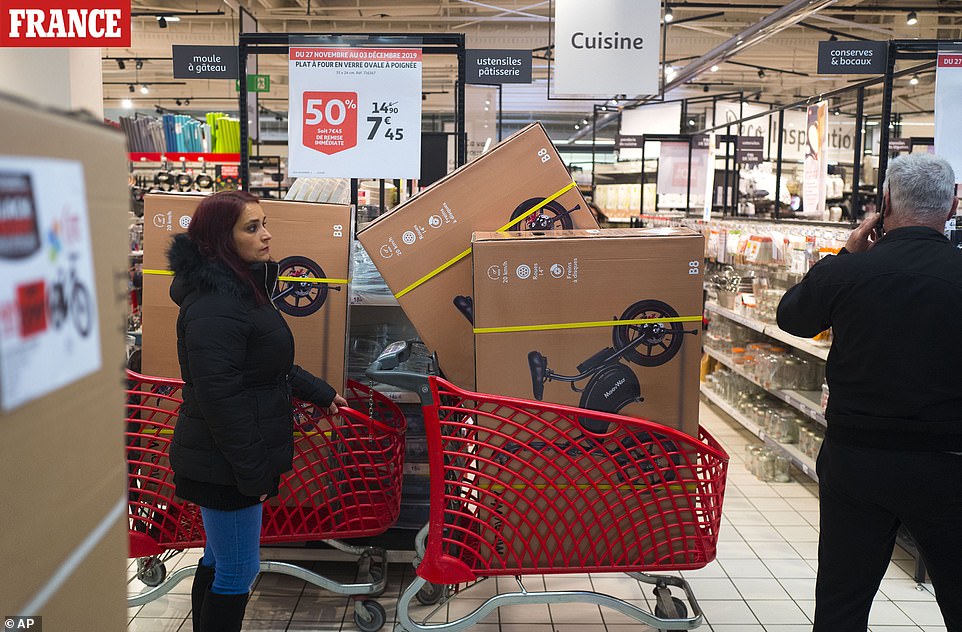 Large items are packed into shopping trolleys at a store in Englos, northern France as eager shoppers welcome Black Friday 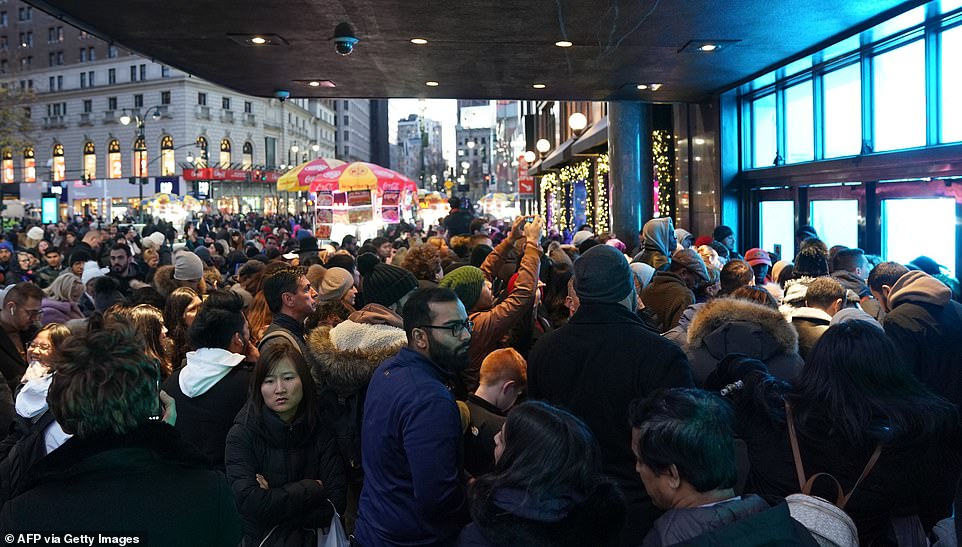 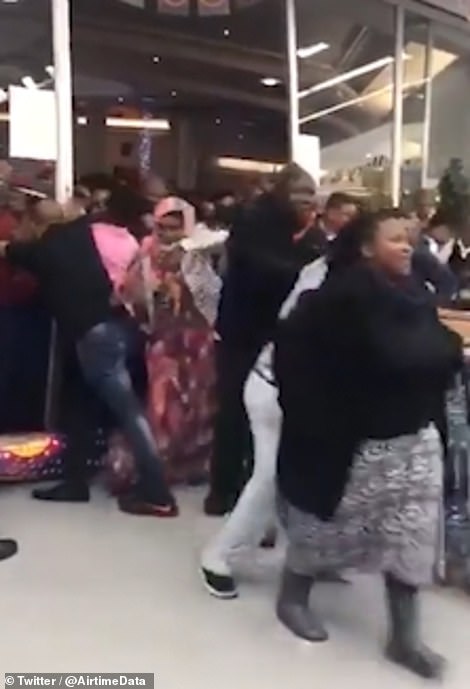 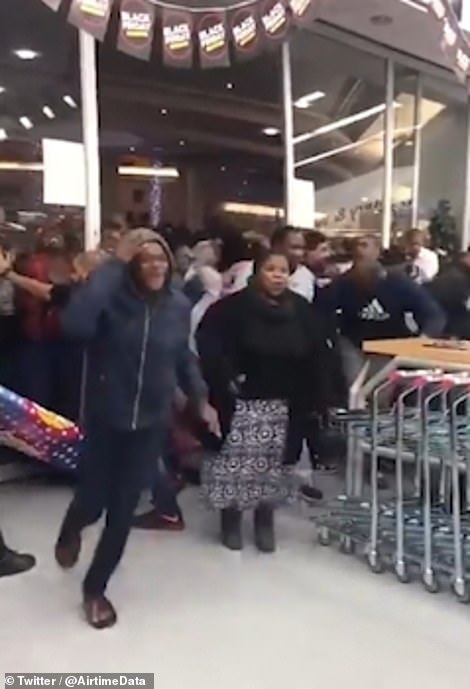 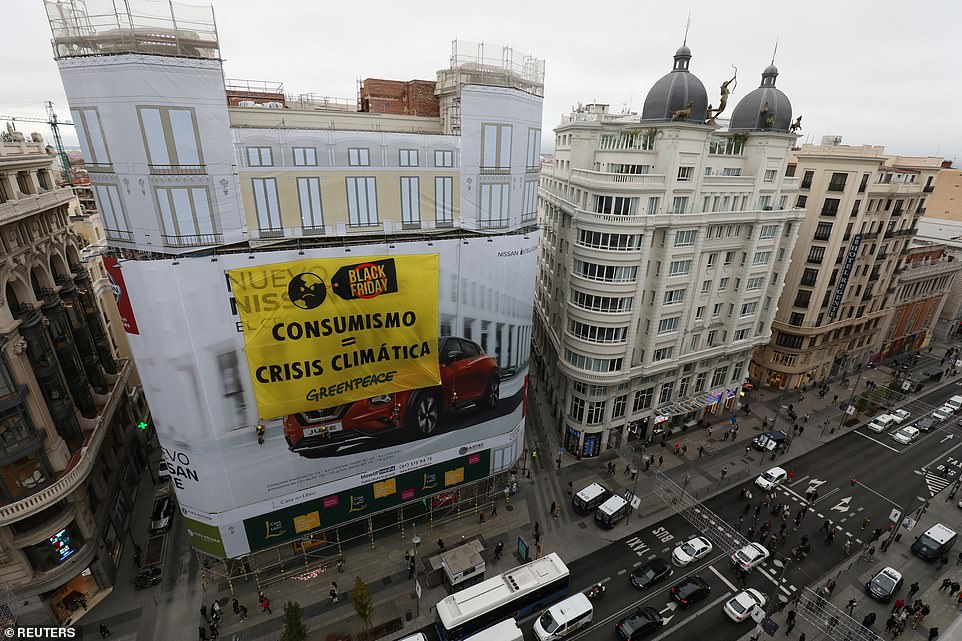 Protest: There was some opposition to Black Friday today, including in Spain where this Greenpeace banner reading ‘consumerism = climate crisis’ was hung in Madrid

The Black Friday advertising push has also extended beyond the one day to Cyber Monday and a so-called ‘Black Week’ in several countries.

However in Italy Black Friday falls outside the season’s strictly defined schedule for when the winter shop sales can be held.

In France, a ‘Block Friday’ protest sprung up in Paris where a manifesto says: ‘The planet burns, oceans die, and we still want to consume, consume, and therefore produce, produce – until we eradicate all living things? We will not betray our children for a 30% discount!’.

Russia’s consumer watchdog also issued a long statement with tips on how to avoid getting fooled, like checking whether prices were raised before Friday to make deals look good or whether delivery costs are inflated. 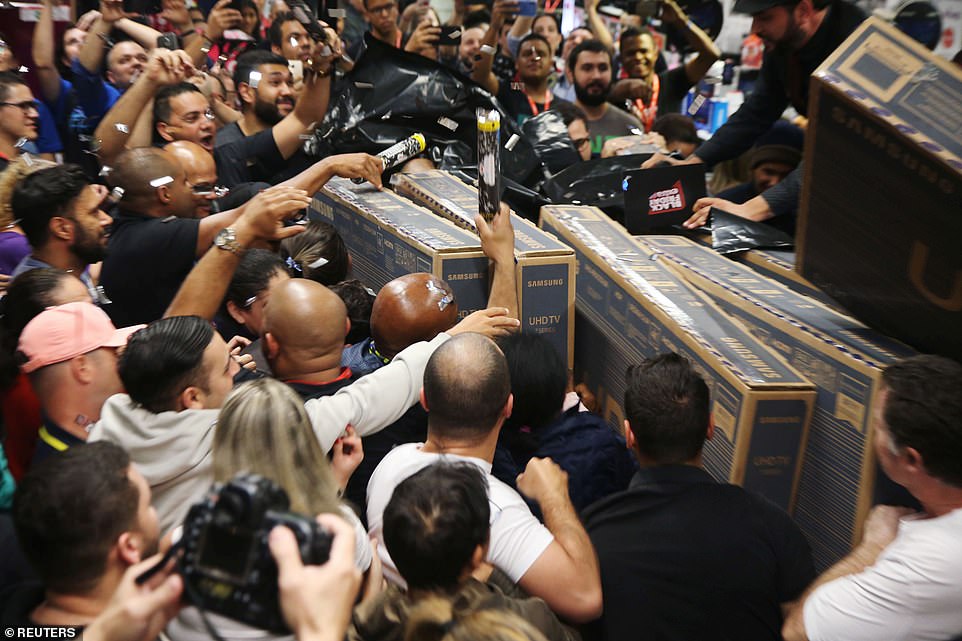 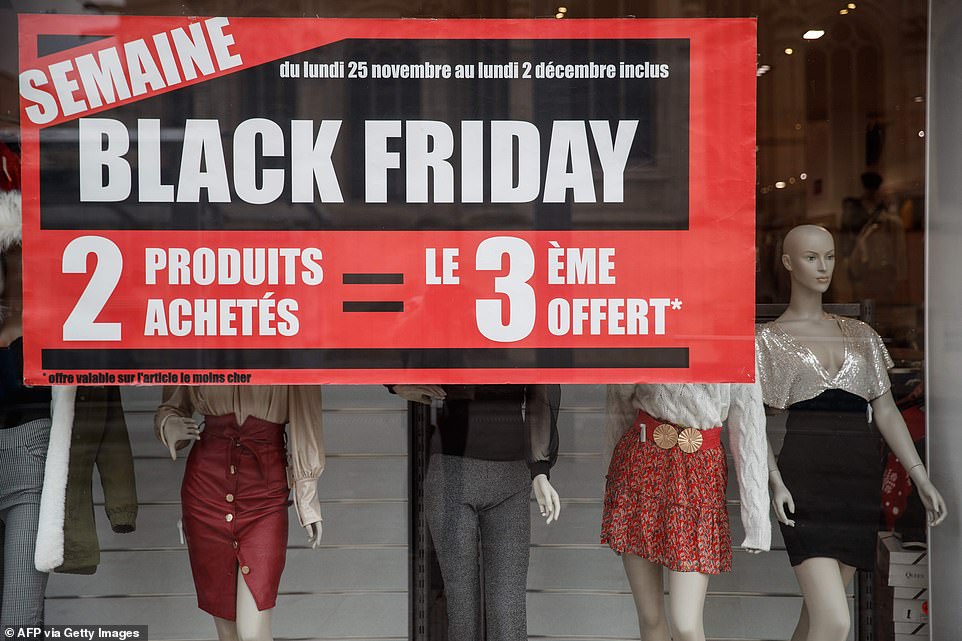 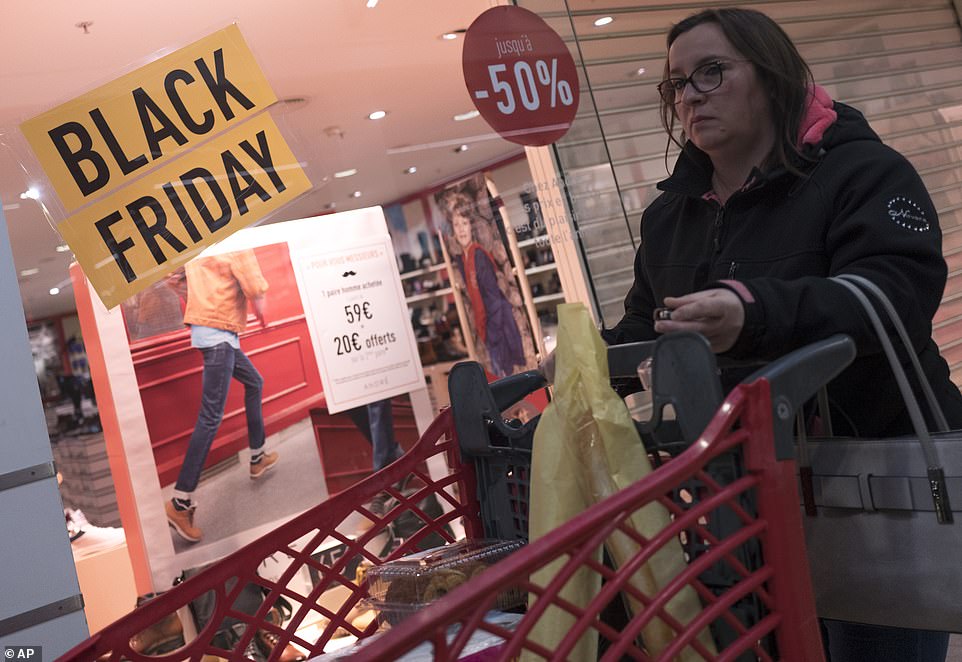 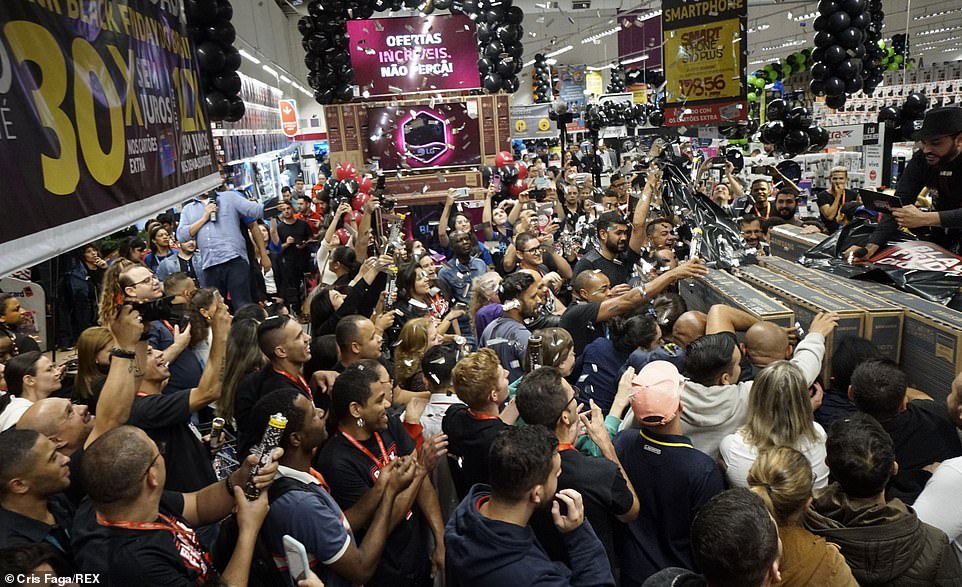 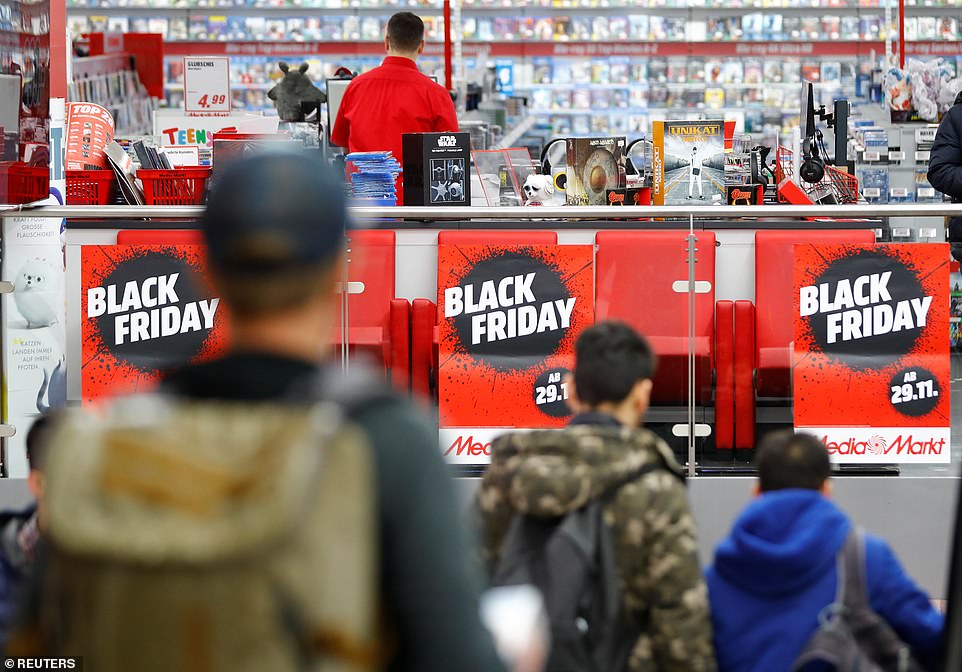 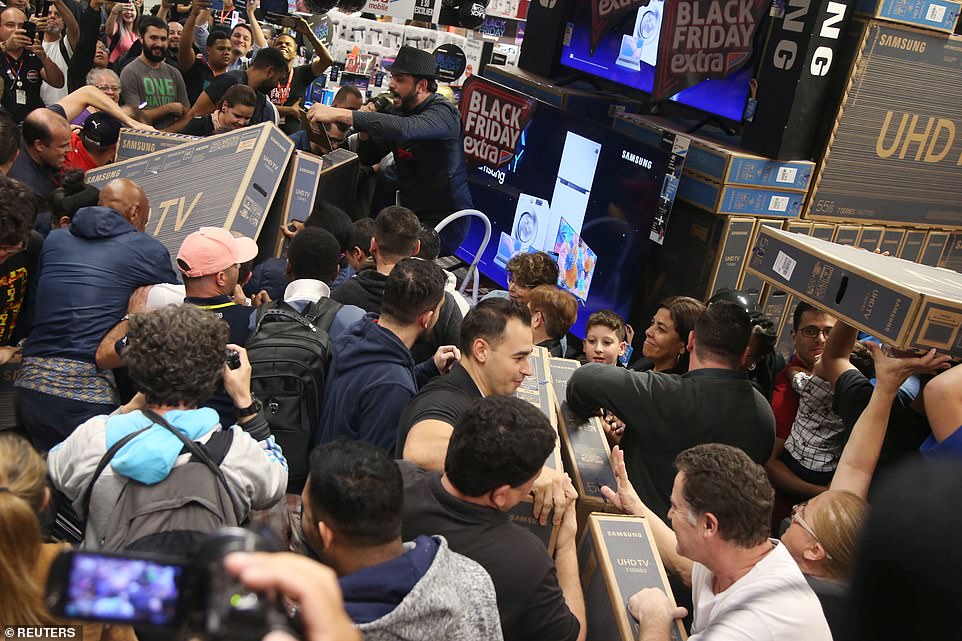 Shoppers reach for television sets in Brazil, where Black Friday advertising was plastered across this store in Sao Paulo 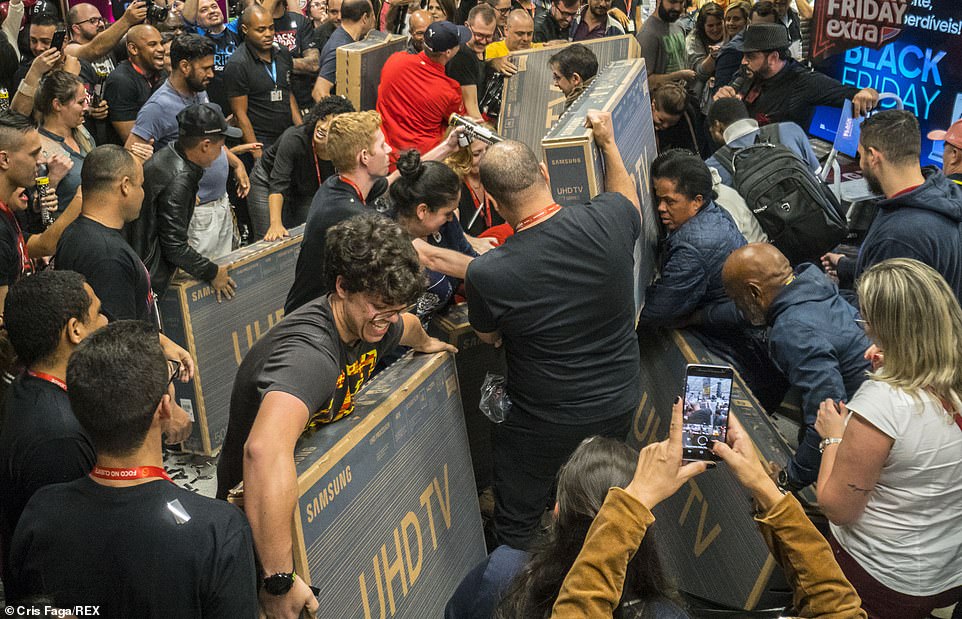 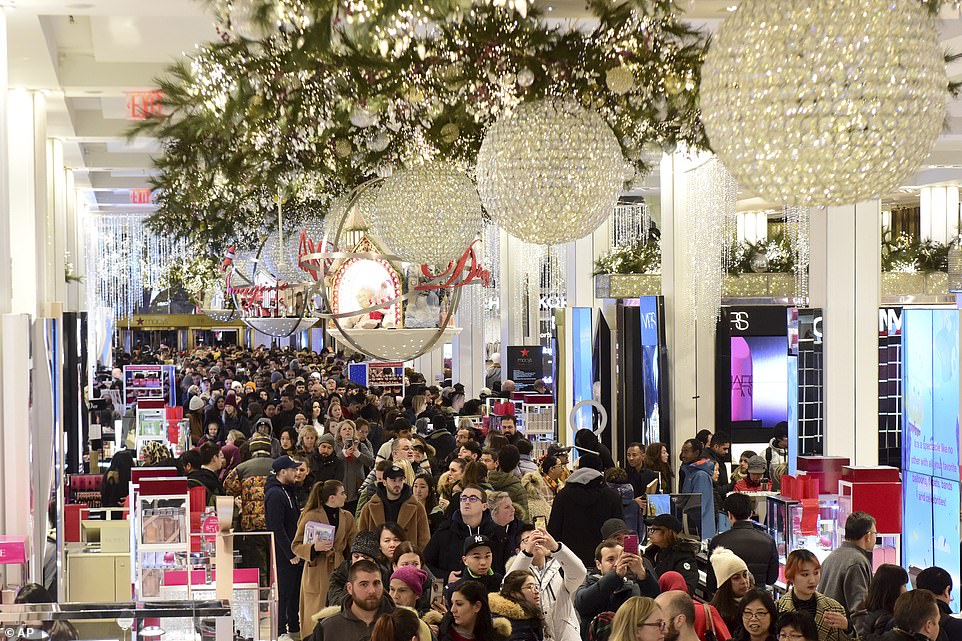 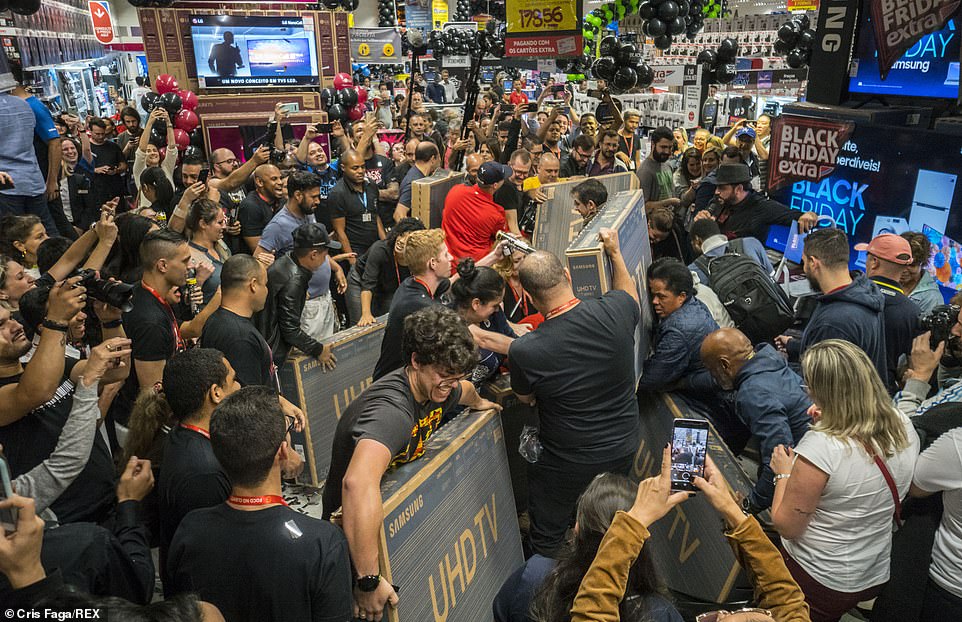 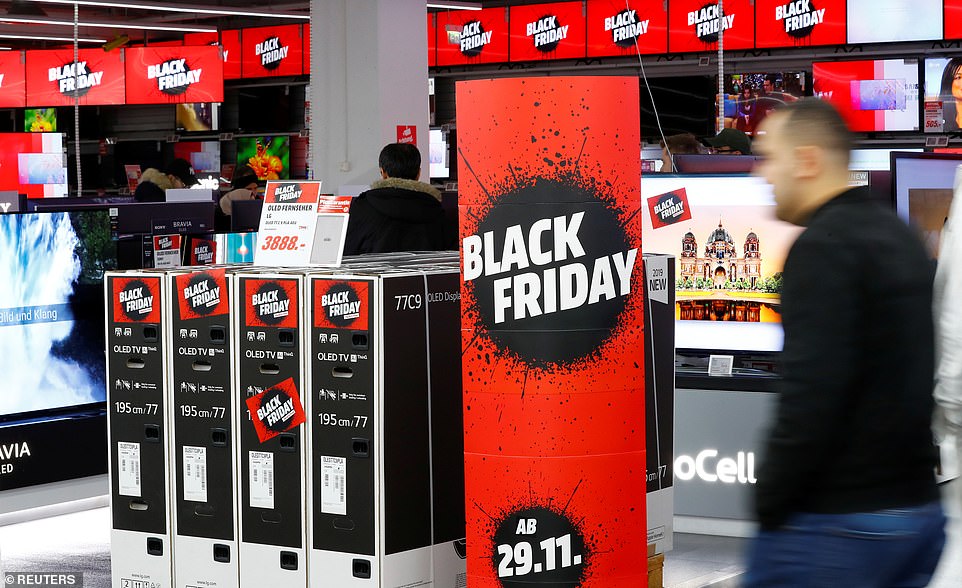 A Media Markt store in the centre of Berlin is decked out with Black Friday advertising, including on a row of televisions 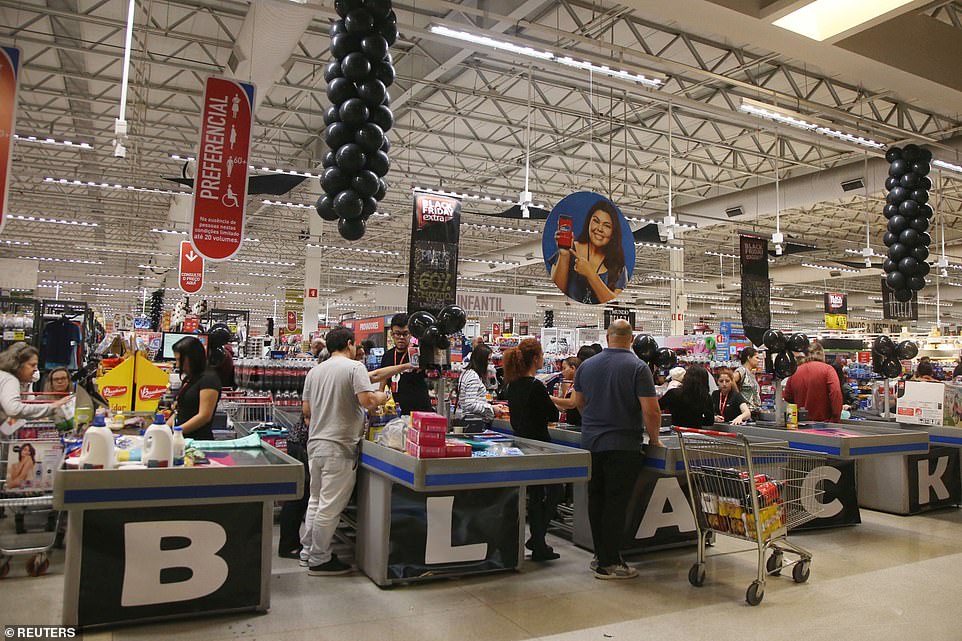 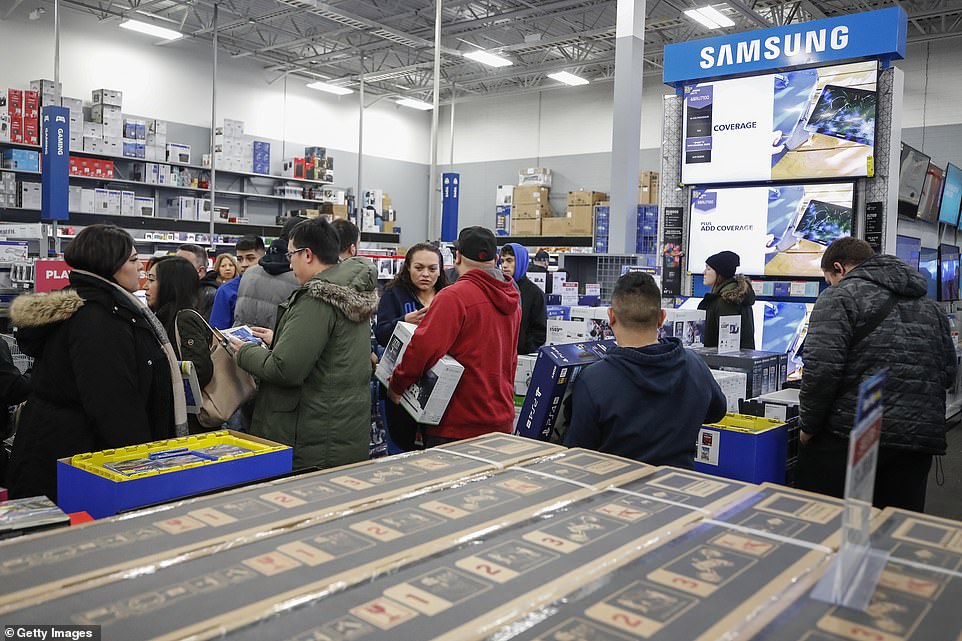 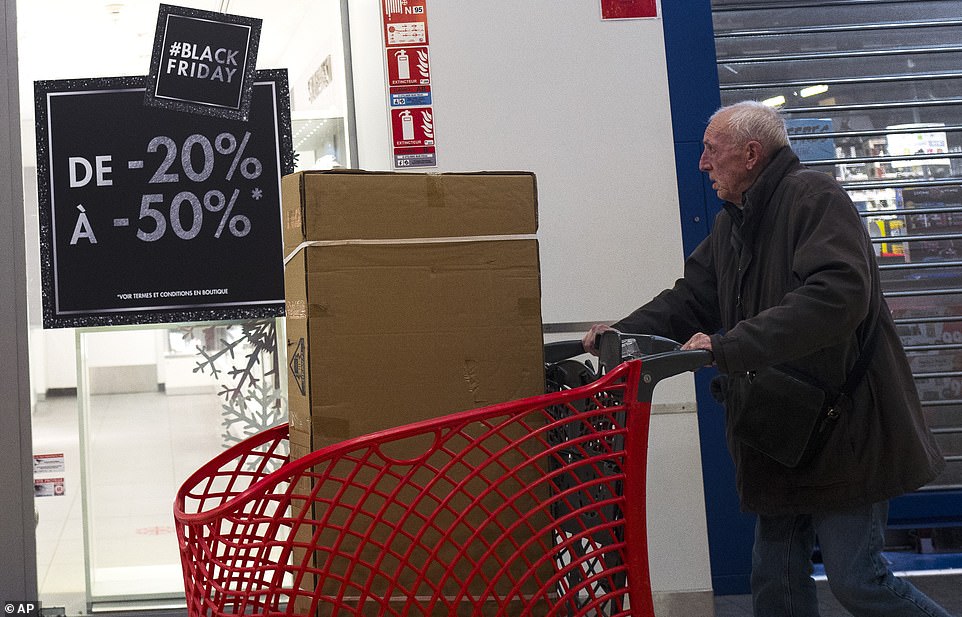 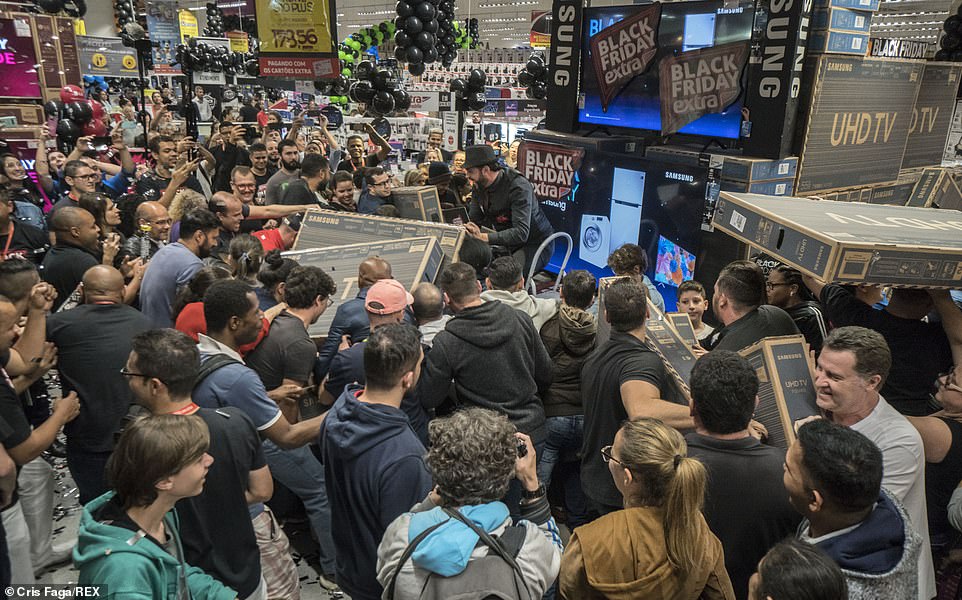 People scramble for discounted televisions at a store in Sao Paulo, some customers taking pictures of the bundle 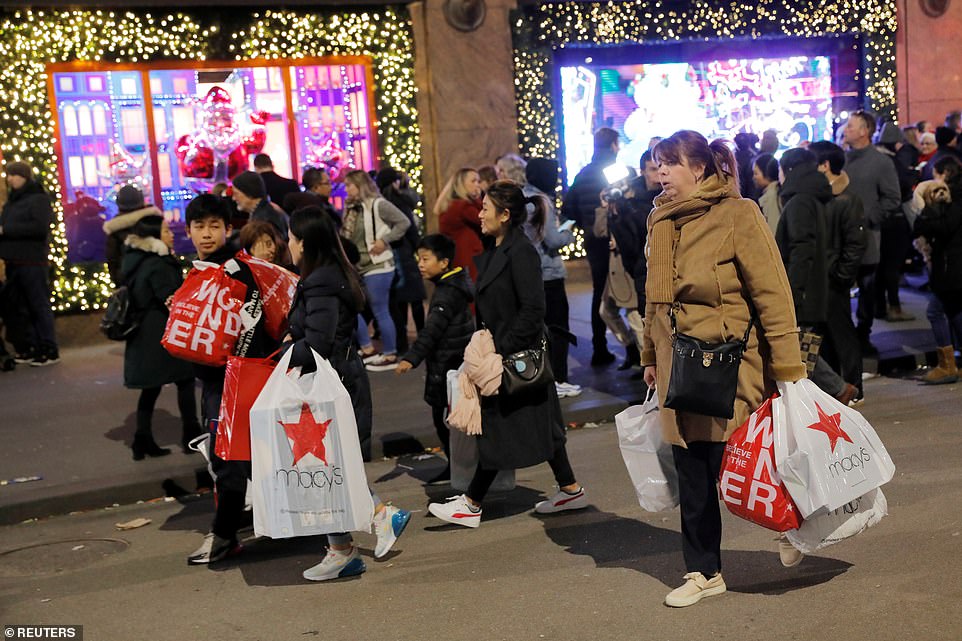 On a mission: Shoppers hold Macys carrier bags as they walk through Manhattan yesterday on a hunt for Christmas deals 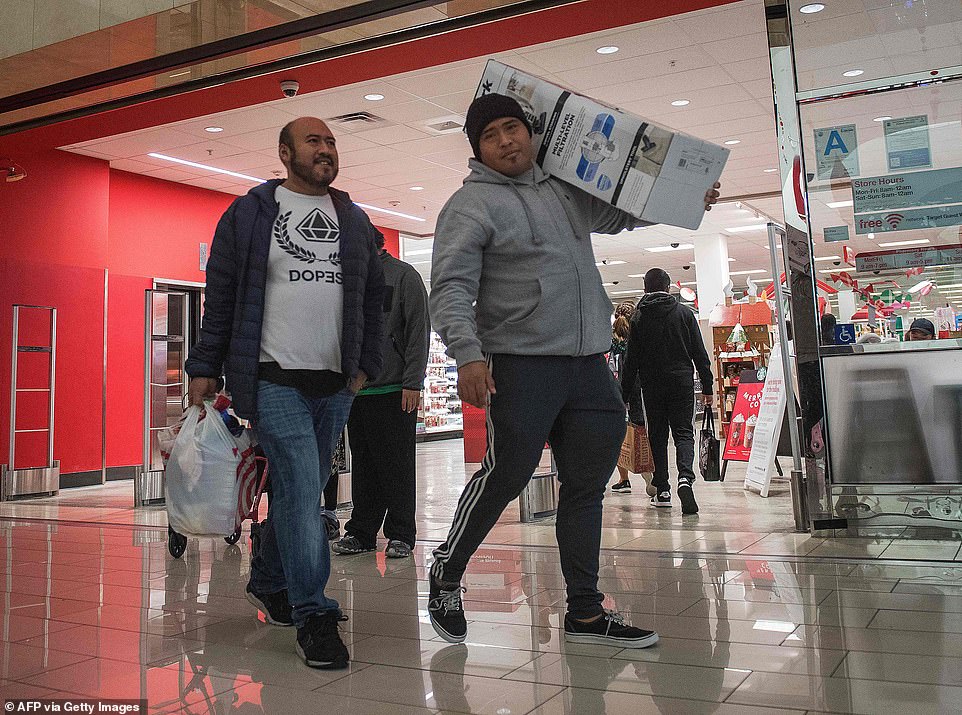 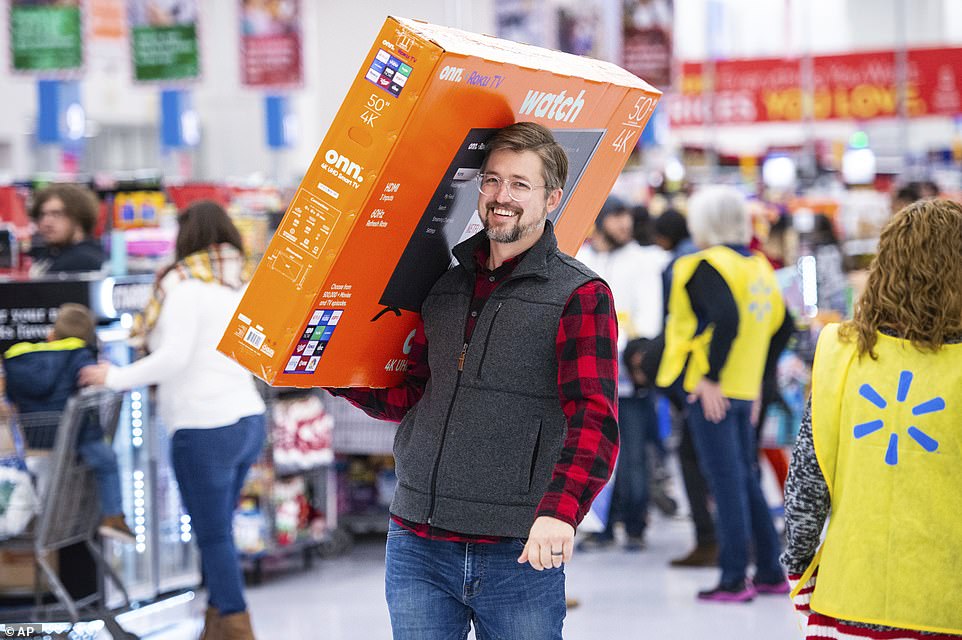 This customer couldn’t contain his excitement over purchasing a brand new 4K TV on Black Friday at a Walmart Bentonville, Arkansas 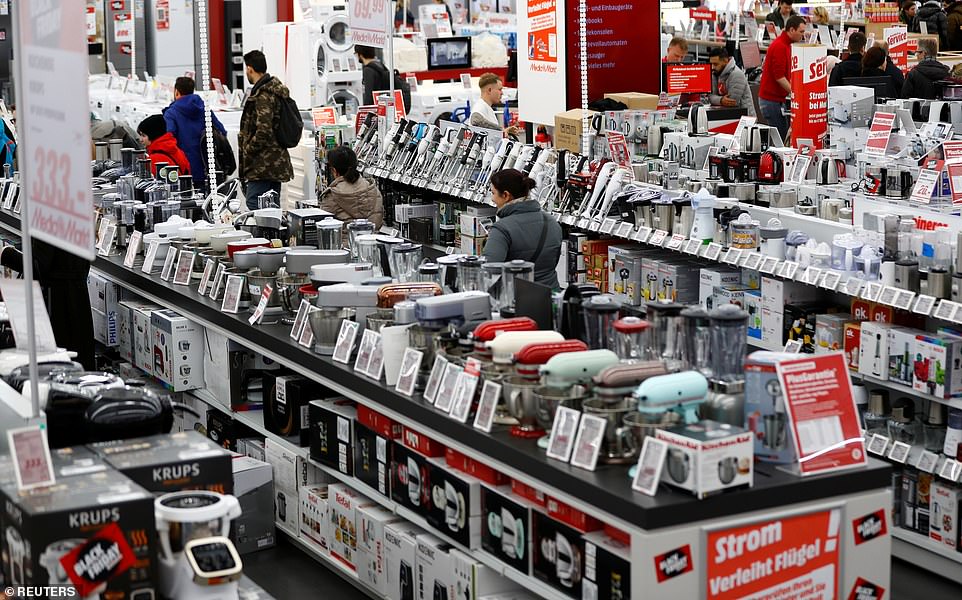 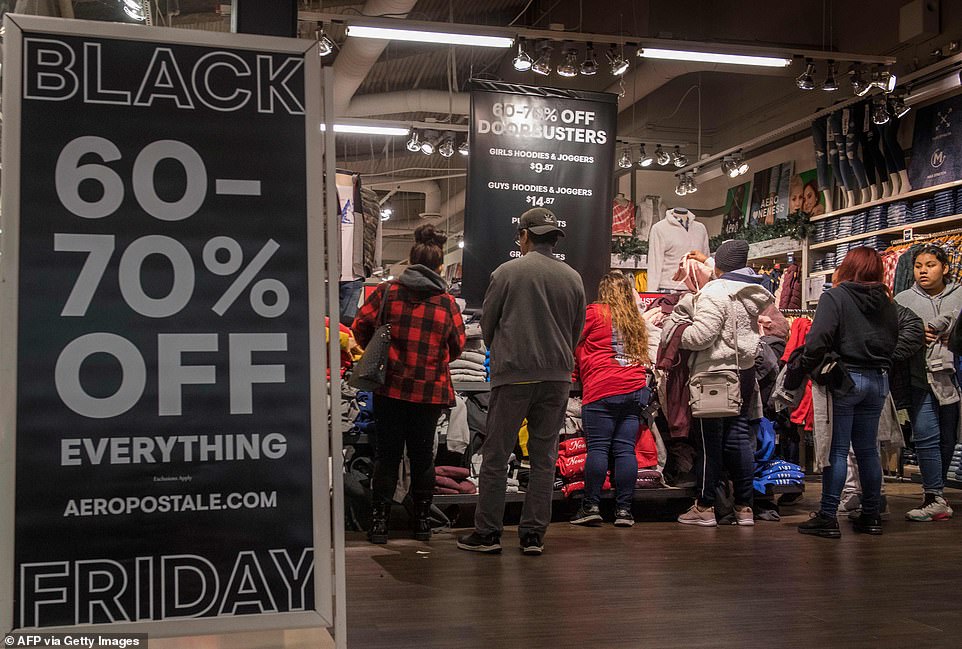 Shoppers in Los Angeles, California pictured at Aeropostale on Thanksgiving evening for a night of shopping 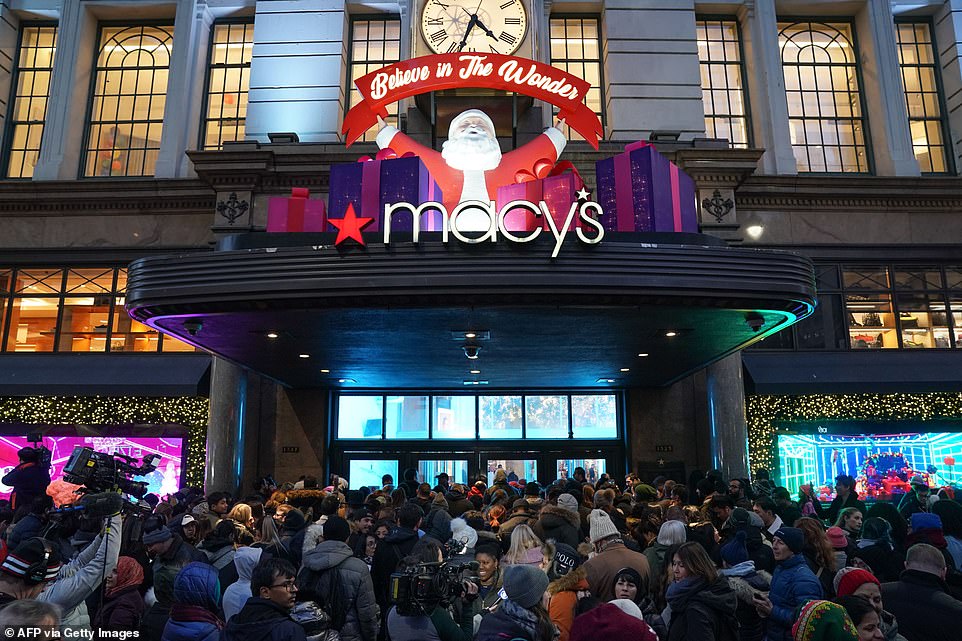