Black Friday: ‘Nine in ten deals are NOT cheaper’ with one TV being sold for ‘£150 less’ in December

It’s the most hyped shopping event of the year, with consumers lured into spending £8billion by promises of massive price cuts.

But nine out of ten Black Friday deals do not offer the savings claimed, it is revealed.

Research by consumer experts at Which? found many of the products sold with apparently huge discounts could have been bought more cheaply at other times.

A study by consumer experts at Which? found many of the products sold with apparently huge discounts on Black Friday could have been bought more cheaply at other times (stock picture)

Which? monitored the prices of 94 popular products, including TVs, cameras and fitness trackers, that were on offer over Black Friday 2017, from six months before until six months afterwards.

It found the overwhelming majority – 87 per cent – were cheaper at other times of the year. It brings into question the true value of Black Friday, which falls this week.

The rise of online shopping means the number of customers in stores on Black Friday will be down by 3.7 per cent on the same day last year, according to analysts.

By contrast, they expect a 4 per cent rise in internet purchases on the day. Total retail spending over the Black Friday weekend is predicted to hit £8.3billion, the Centre for Retail Research said.

But retail analyst Springboard said this ‘will do little to help the beleaguered high street’.

The numbers in shopping centres on Friday are expected to be down by 4.7 per cent on last year, with a fall of 4.5 per cent for high streets and 1 per cent for retail parks.

But Springboard said online spending for Black Friday is not rising as fast as in the past, amid economic pressures and scepticism over claimed savings.

The investigation analysed deals on the websites of Amazon, Currys PC World, Argos and John Lewis, which all heavily promote their Black Friday sales.

For example, an LG brand 60in 4K TV was advertised at £799 by Amazon on Black Friday. However, it was £50 cheaper on at least 62 occasions after the event and dropped a further £150 for at least four days at the end of December and beginning of January.

A 49in LG television was £599 at Currys PC World – but £20 cheaper from the end of December to mid-January, and again in April. Both this TV and the 60in LG sold by Amazon were part of the retailers’ Black Friday deals, although no ‘before’ price was given.

A Sony Cybershot Superzoom compact camera was advertised as £189 with a claimed saving of £10 on Black Friday by Currys PC World. But it was £10 cheaper at least 27 times before the sales event and 43 times after.

Alex Neill, managing director of home products and services at Which?, said their investigation would disappoint shoppers expecting nothing but bargains.

‘While retailers are bombarding us with promises of great discounts and time-limited sales, it’s clear not all deals are as good as they appear,’ he said. ‘To bag a bargain, do your research and don’t get carried away by the hype when shopping in the upcoming sales.’

The investigation looked at 59 deals at Currys PC World, 18 deals from Amazon, 14 deals at John Lewis and three from Argos. 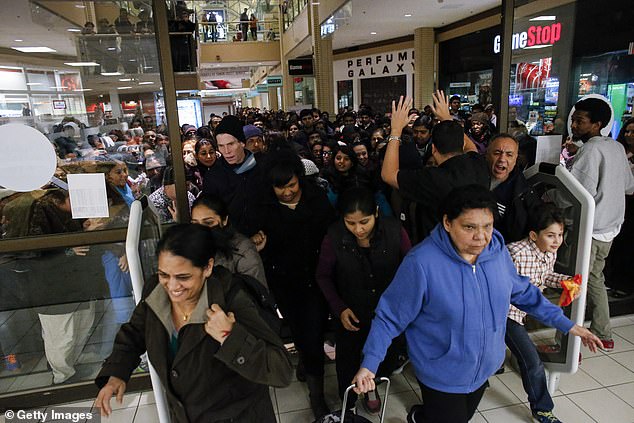 Which? monitored the prices of 94 popular products, including TVs, cameras and fitness trackers, that were on offer over Black Friday 2017, from six months before until six months afterwards. Their data has called into question the true value of Black Friday (stock picture)

Currys PC World insisted it offers great value on products throughout the year and clearly states when a product was available for a higher price. It has a Price Promise to match other stores.