A black high school student from Pennsylvania was forced to remove his Black Lives Matter face mask in order to graduate, according to the teen’s family.

Dean Holmes had been participating in his graduation from York Catholic High School in York on July 28 when he was ‘pulled from the graduation procession line’ by the school’s principal, his mother shared in a viral August 1 Facebook post.

Holmes was allegedly told that he would not be able to graduate when the principal – – Katie Seufert – pulled him aside and told him to remove the mask.

He removed the mask and was given a standard issue one that allowed him to walk in the ceremony for the private school.

June Holmes, the teen’s mother, lambasted the school for jeopardizing her son’s ‘health and safety’  and asserted that his freedom of expression was ‘censored’ when he was compelled to remove the mask.

‘As a parent I will not stand for my son being humiliated publicly, having his basic human dignity crushed on what should have been one of the happiest days of his young life,’ June said in the post. 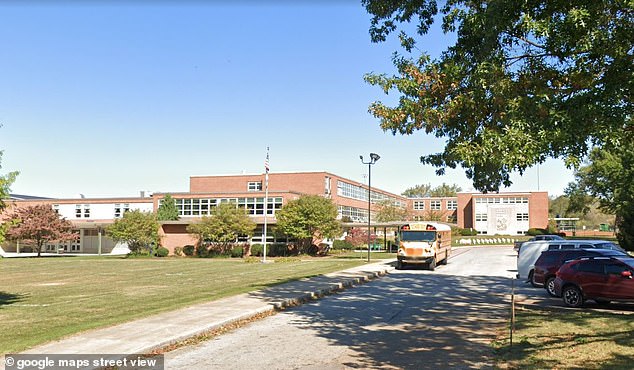 The school released a statement saying that the student was not wearing a mask for the 45 minutes prior to the ceremony. They also sated that messages were not allowed on caps or gowns

The concerned mother shared that Dean had been subject to a series of questionable incidents surrounding his race and activism.

She said that while the minority student population at the private school is roughly 30 per cent, there are no

June Holmes also highlighted that her son started the ‘Minority Student Club’ after he was specifically prohibited from creating a black student union at the school.

Prior to the latest incident surrounding graduation, the mother shared that Dean received a 100 per cent on a essay he wrote on being a black boy in America. When he tried to enter the essay in a speech contest for the school, he was told he couldn’t read the piece. 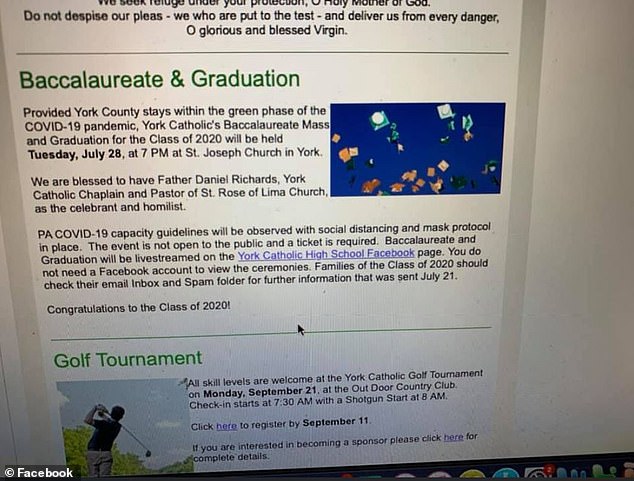 ‘My son literally was discriminated against in plain sight based on his race and his prior civil rights activism, and this latest action is part of a pattern and practice of discrimination at York Catholic and it cannot stand unchallenged,’ she declared.

‘One can only graduate from high school one time and for him to have to suffer this injustice is reprehensible. The dissatisfaction that he felt by being pulled out of line and forced to remove his mask was both incalculable and traumatic and will follow him the rest of his life.’

‘Each graduate was given a face shield to be worn in lieu of a face mask. Graduates gathered outside the church prior to processing inside,’ the school said in a August 2 statement. 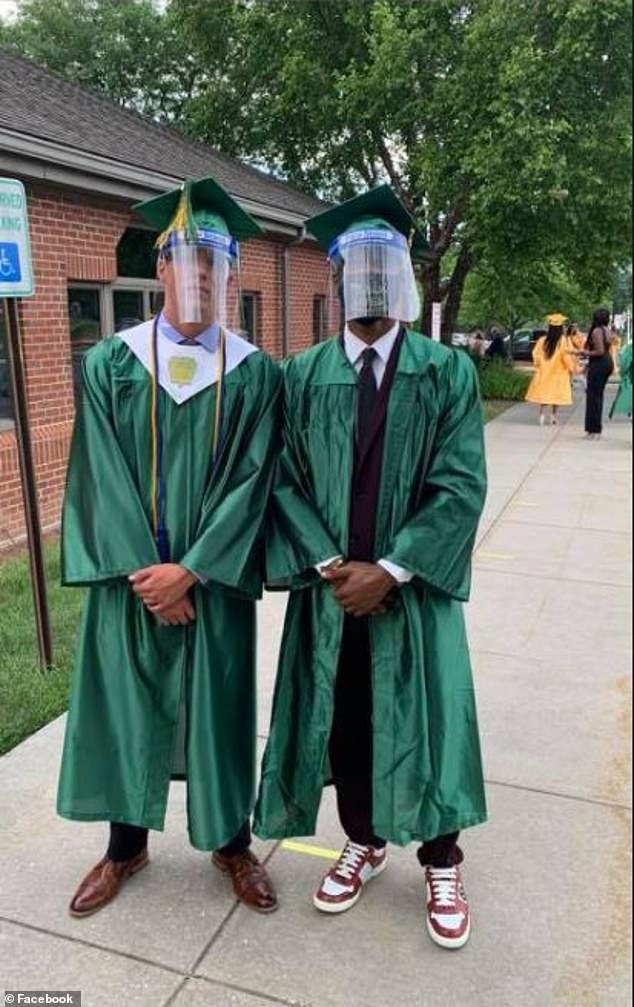 Dean shared photos from the moments before graduation that show him wearing the mask while posing with friends. He and his mother shared that he has been subject to a long history of discrimination at the school

‘They were checked in, asked several questions regarding exposure to COVID-19, and temperature checked. Two other graduates chose to wear a solid face mask with no writing in addition to the actual shield and sought permission in advance to do so.’

The school claimed that Dean had not worn the mask for 45 minutes prior to the ceremony starting. They said that it was not until the ‘last minute’ when Dean put on the mask, right before entering the church.

He was asked to remove the mask ‘away from other graduates and guests,’ the school said in their statement.

‘The decorum of York Catholic’s Baccalaureate and Graduation ceremonies follow the tradition that no messages are permitted on caps or gowns. Any graduate wearing a cap, gown, or mask with any message would have been asked to remove it,’ the school said in the statement.

Dean took to his own Facebook, soon after, refuting many of the claims made by the school.

He shared that during the 45 minutes prior to the graduation, he had actually been outside on the lawn while taking pictures and chatting with friends.

The student said that during that time, he was not checked in or asked any questions regarding his health. He also refuted claims that he had his temperature checked during that time.

Dean shared that he had actually had on his mask for the duration of that time, providing a photo he took with a friend that has a time stamp showing he had his face covered.

‘It is sad that they are trying to pull this because I talked to administration members before graduation started and they saw me with my mask on but did not say a word about it,’ the high school graduate said.  ‘I did not just put the mask on right before walking in and I am sure classmates can attest to this.’

Dean explained that administrators had not said anything about the mask until he had started walking during the ceremony.

He said that he ignored the first administrator and began arguing with the second, getting out of line to finish his conversation. 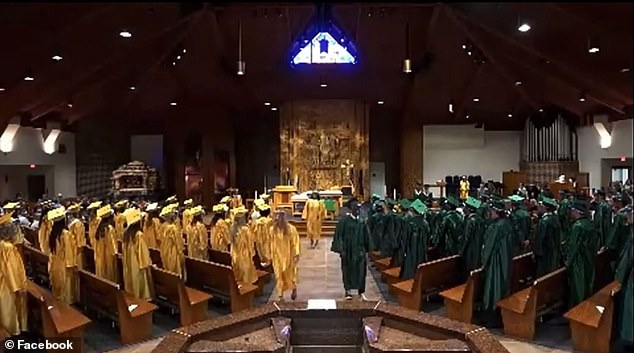 The student said that he was forced to hand over his mask and wear the new one, providing video that showed him walking last for the guys line in the graduation ceremony

The student said that he was forced to hand over his mask and wear the new one, providing video that showed him walking last for the guys line in the graduation ceremony.

‘They misrepresent me and still offer no apology or anything of the sort. The image of the school seems to be more important than my black life unfortunately,’ Dean concluded in his post.

‘Trust that I will continue to fight for what is right forever and always. I do not stand for this. I will not back down.’

Dean, along with two other students, have organized a BLM march at the catholic school for August 15.