A Black Lives Matter activist has claimed he was shot in the groin with a rubber bullet during a protest in Los Angeles, causing him to lose a testicle.

South African native Bradley Steyn, who was involved in anti-apartheid protests in South Africa when he was younger, claims the LAPD are responsible for his injuries, and he now plans to sue.

Steyn claims he was attacked by law enforcement during a May 30 George Floyd protest in Los Angeles’ Fairfax district.

He has since started a GoFundMe page to cover his medical bills and legal funds, and is looking to raise $17,000.

On the page, he describes the events of May 30. ‘I was marching peacefully with at the Black Lives Matter march on Saturday the 30th May, here in Los Angeles, near Fairfax in memory of George Floyd and so many other black Americans that have been murdered in America. Apartheid-style,’ he writes.

‘At the march I was shot by a member of the LAPD with a rubber bullet in the testicles. One of which was ruptured and led to me almost bleeding out on the streets of Los Angeles.’

South African native Bradley Steyn says he was taking part in a protest in Los Angeles when police officers shot him with rubber bullets at point blank range, one of which rupture his testicle. He says that he required emergency surgery later that day

Steyn shared pictures of him lying in a hospital bed, showing a mark on his chest where he claims he was beaten, and a large bruise on his left leg where he was shot, as well as a cast covering his groin.

In an interview with Select Times Live shortly after the incident, Steyn said: ‘Police used batons to a young woman who was sitting on her knees.

‘I tried to get him off her, and I was hit across chest by a police baton. A policeman saw me trying to physically push the cop off her and hit me in the chest. Then he aimed for my genitalia – he was two or three feet away – and shot directly into my genitalia.’

Speaking to South African network Newzroom Afrika earlier this month, Steyn said that the violence he witnessed reminded him of what he had witnessed in South Africa in his younger years.

‘Growing up in South Africa, we were exposed to terrible violence and protests and police brutality,’ Steyn said.

‘Here, in the land of the free and the home of the brave, I thought that I could take my 10-year-old daughter to a protest and show her that you need to stand up to governments and authorities that abused their power.’

At the last minute, Steyn decided not to take his young daughter to the protests fearing that violence could break out.

He claims that the protest was largely a peaceful one, and that violence was escalated by the LAPD, and that his encounter with the police occurred when he tried to stand between an officer and a woman who was being hit.

Steyn says that this is when he was hit with two rubber bullets at point-blank range – one in the thigh and the other directly in the gentiles – causing his left testicle to rupture. He then claims he passed out from the pain and needed emergency surgery later that day.

He says that he has been told that while doctors saved his live, he may not be able to have children in the future. 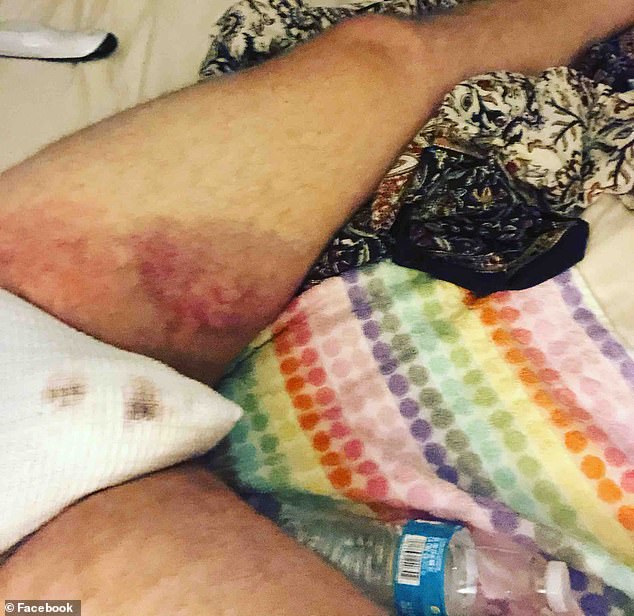 Steyn shared pictures of his injuries on Facebook after returning home from the hospital. His groin is covered by a case, and he has large bruises on his thighs 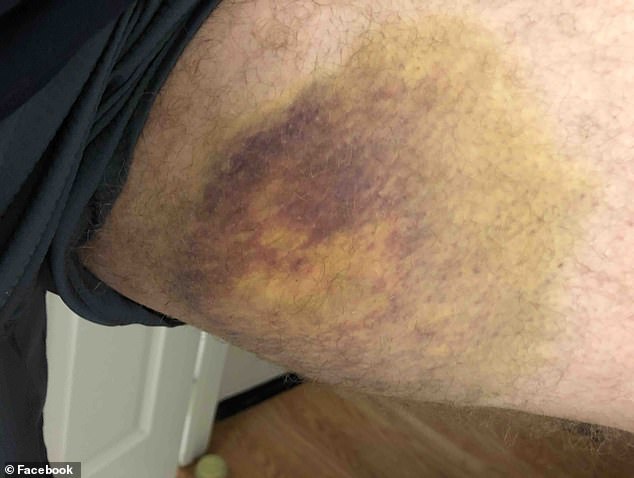 In another photo shared on Facebook since having the cast removed, the bruising he claims was causes by the rubber bullet remains, and covers a large portion of his thigh

On the GoFundMe page, he also writes about his background in South Africa. He says at the age of 17, he was caught up in the Strijdom square massacre 1988 which saw a man kill eight people in a shooting.

He writes that ‘innocent Black civilians were targeted by a racist white supremacist dressed like a policeman,’ before acknowledging that by being white, he was not targeted himself.

He recalls how a black man lay in his lap dying as Steyn tried to stop the bleeding.

‘That event changed my life forever though,’ he writes. ‘I dedicated my life to fighting evil and racism… We won the war against racist oppression in South Africa. We brought one of the most powerful and evil, racist security military complexes to its knees.’

According to the Wikipedia page about the Strijdom square massacre, Steyn is noted as a witness to the attack, and credited with creating a commemorative plaque that was placed in the square.

He has also spoken about how he suffered PTSD after witnessing the massacre at such a young age. 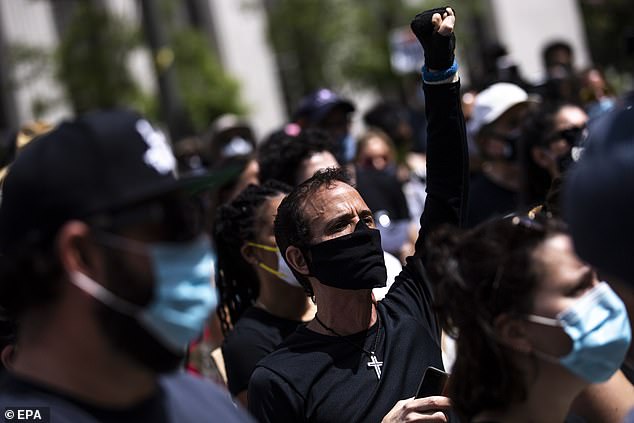 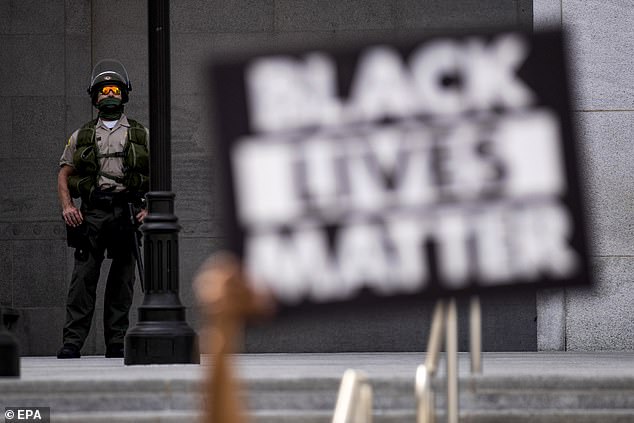 Pictured: An officer stands guard during a Black Lives Matter protest outside the Hall of Justice in Los Angeles, California, USA, 24 June 2020

He also goes into detail about how he joined the anti-apartheid movement in South Africa, writing:

‘I was covertly recruited as a white operative into Nelson Mandela’s anti-Apartheid movement, the African National Congress’s military wing, Umkhonto we Siswe (the spear of the Nation).

‘I became a clandestine operator to infiltrate and spy against the feared security police, state military apparatus and their proxy white nationalist hit squad units.’

Protests have broken across the U.S. after the death of George Floyd on May 25 at the hands of a Minneapolis police officer, who knelt on his neck for over eight minutes, asphyxiating him.

The killing sparked furious backlash over how police treat Black Americans in the country, and has again galvanized the Black Lives Matter movement.