Screams of ‘f**k the police’ rang out as Black Lives Matter protesters and authorities clashed after thousands took to the streets across Australia on Saturday.

Protesters charged at mounted police outside the Melbourne East Police Station, with many shouting abuse and berating officers.

Police showed little emotion as they stood shoulder to shoulder while the crowd shouted ‘take a knee’ and ‘no racist police, no justice, no peace’.

In Sydney, one protester was seen following a police officer and demanding he show ‘solidarity’ with the marches, which are demanding the end to racial inequality.

South Brisbane police station was swarmed by angry marchers who chanted ‘I can’t breathe’, the same words African American George Floyd said before he was killed while in police custody.

Protesters were seen just inches away from the faces of officers some with megaphones and others armed with signs reading ‘f**k the police’.

In Sydney, protesters unleashed on authorities after the Black Lives Matter protest was ruled legal just minutes before it was due to start after being banned the night before.

‘F**k you you f***kg pigs. Go die, every last one of you,’ one angry protester is heard shouting at NSW officers. 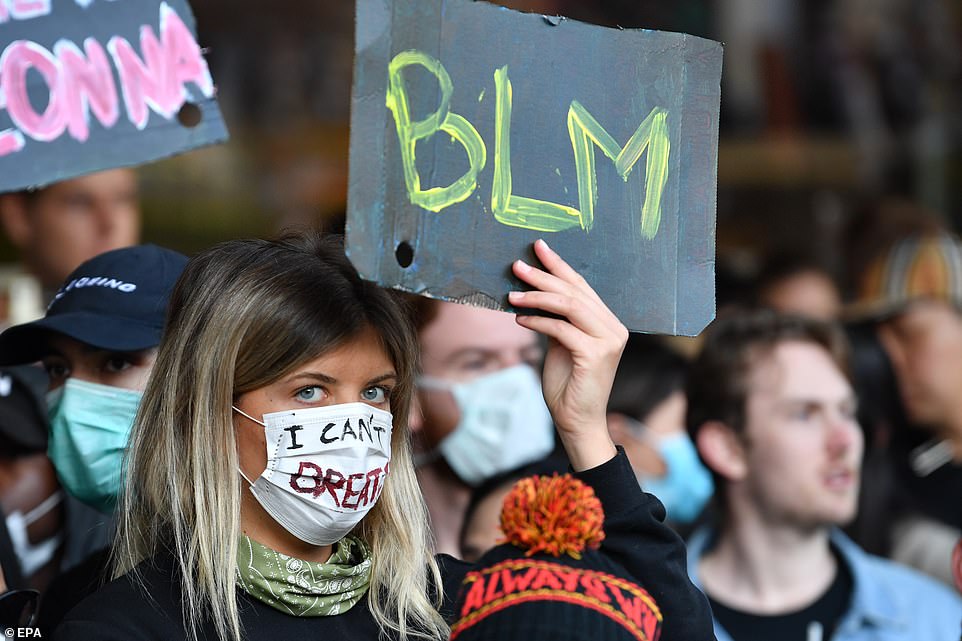 One woman is seen carrying a BLM sign with a face mask reading: ‘I can’t breathe’ in Sydney 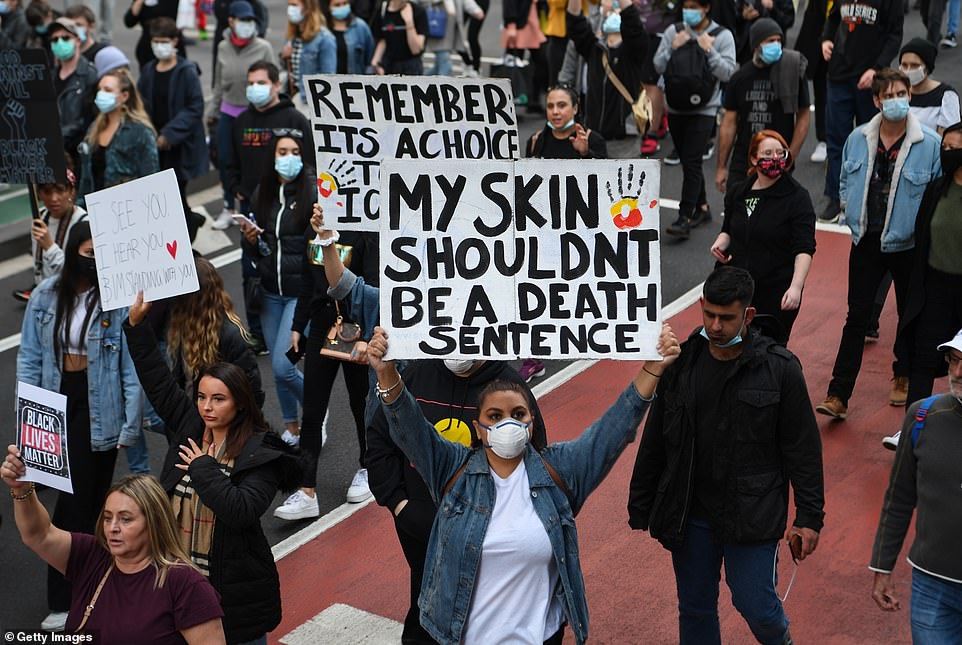 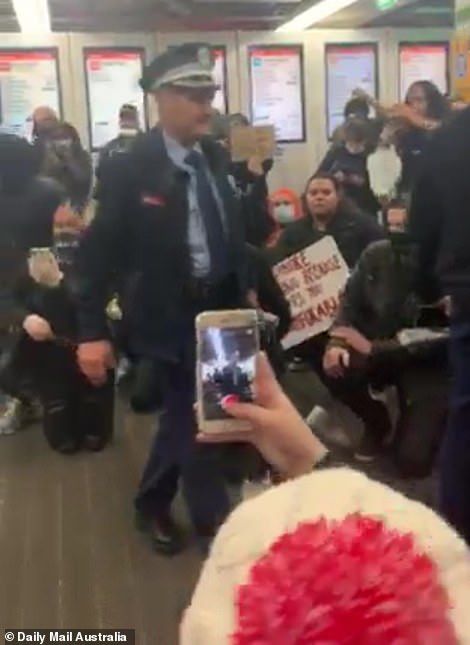 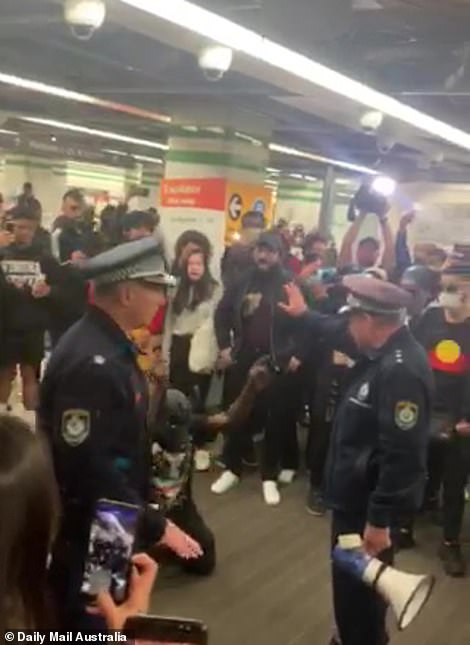 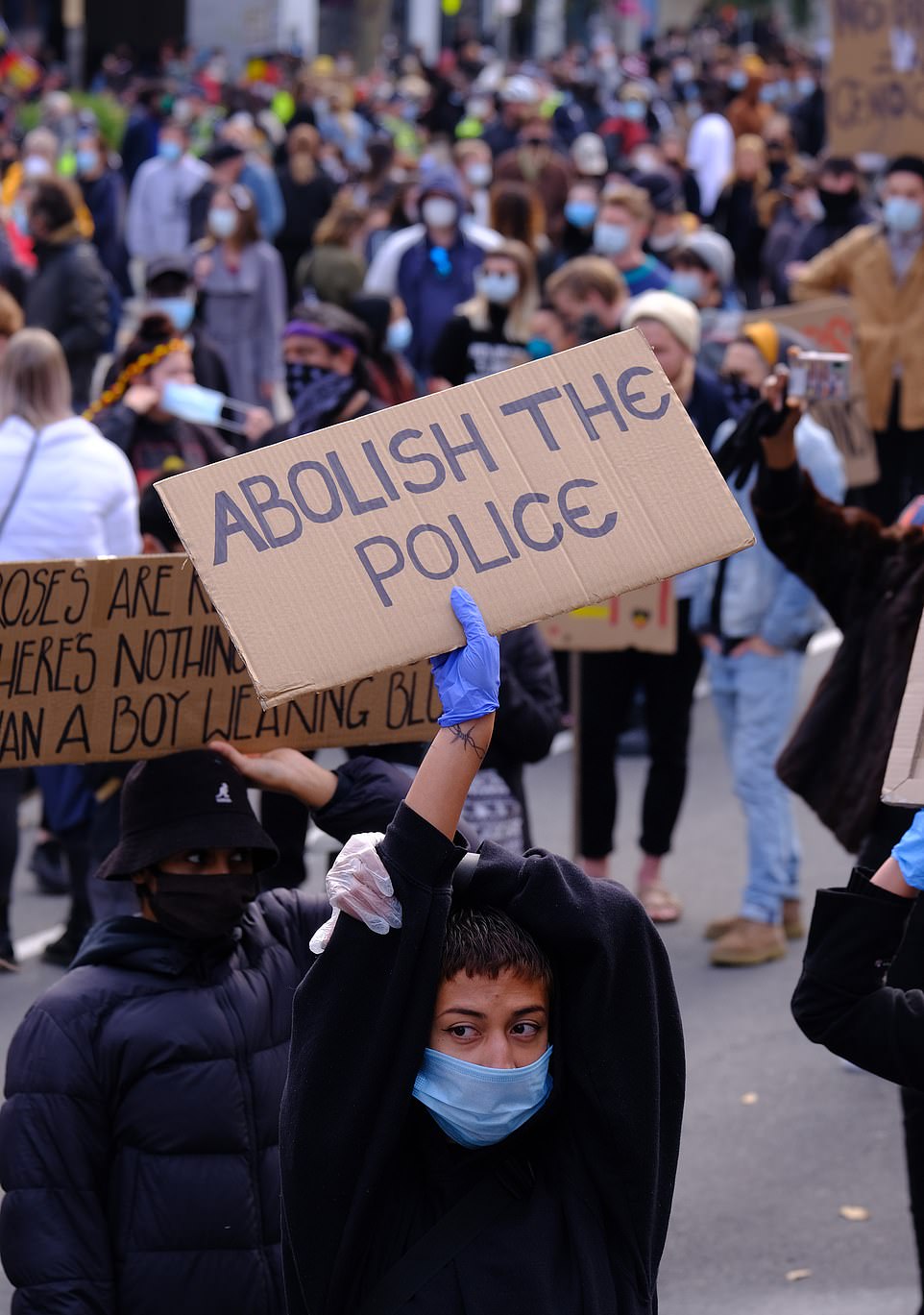 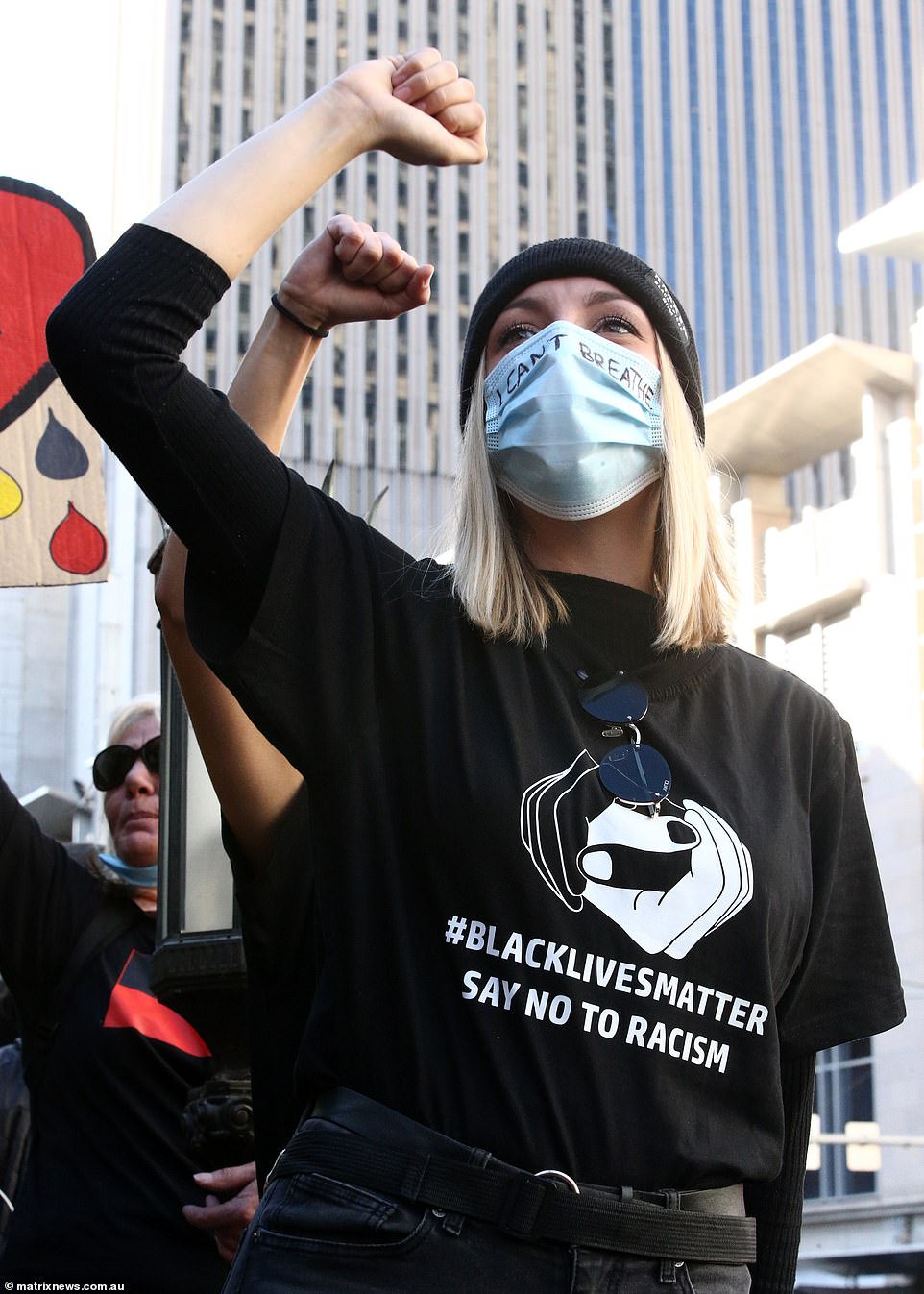 Thousands of marchers took to the streets across all Australian states on Saturday, demanding an end to Aboriginal deaths in custody. Pictured in Sydney

Arrests were made at Central Station as the evening began and activists converged – leaving some protesters struggling to breathe as the crowd swelled.

Protestors began chanting at police while they ushered them towards Central Station, shouting ‘Justice today for David Dungay’.

Dungay died in a Sydney jail in 2015 and told officers who were pinning him down ‘I can’t breathe’ 12 times before his death.

An estimated 30,000 people gathered outside Town Hall on Saturday afternoon despite the Supreme Court banning the protest on Friday in a last ditch attempt to enforce social distancing restrictions.

It came after two people were arrested before the event at around 2.30pm and one man waving an ‘All Lives Matter’ sign was led away by police. 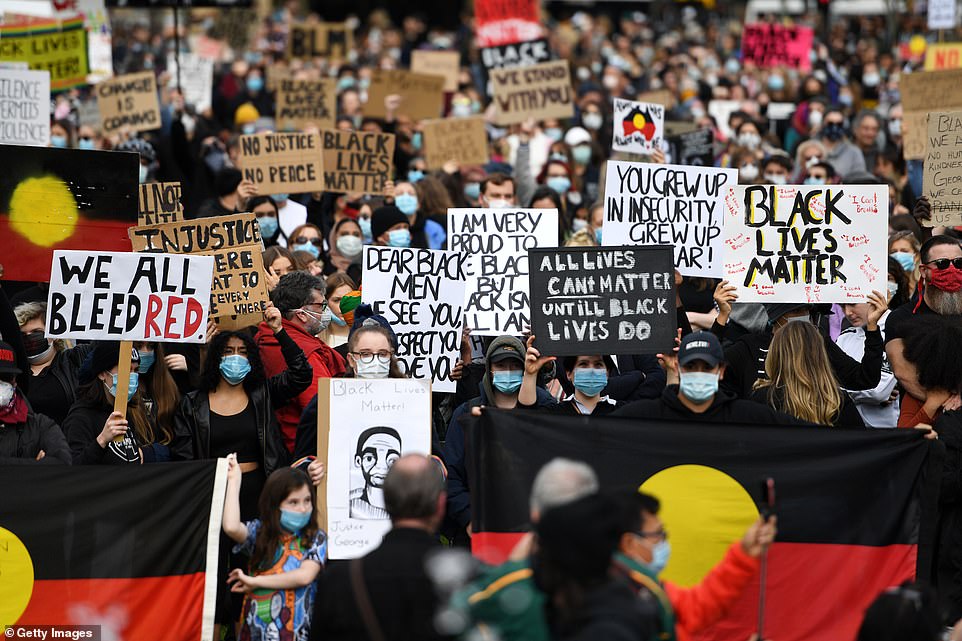 Thousands of Australians calling for an end to Aboriginal deaths in custody have gathered for the global Black Lives Matter protests across the country. Pictured: Demonstrators march in Adelaide 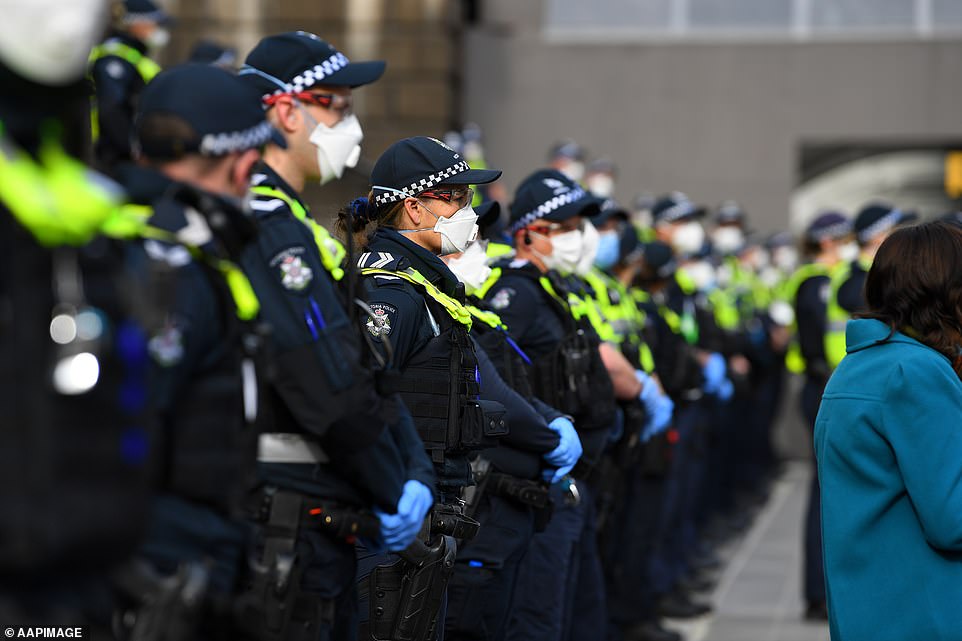 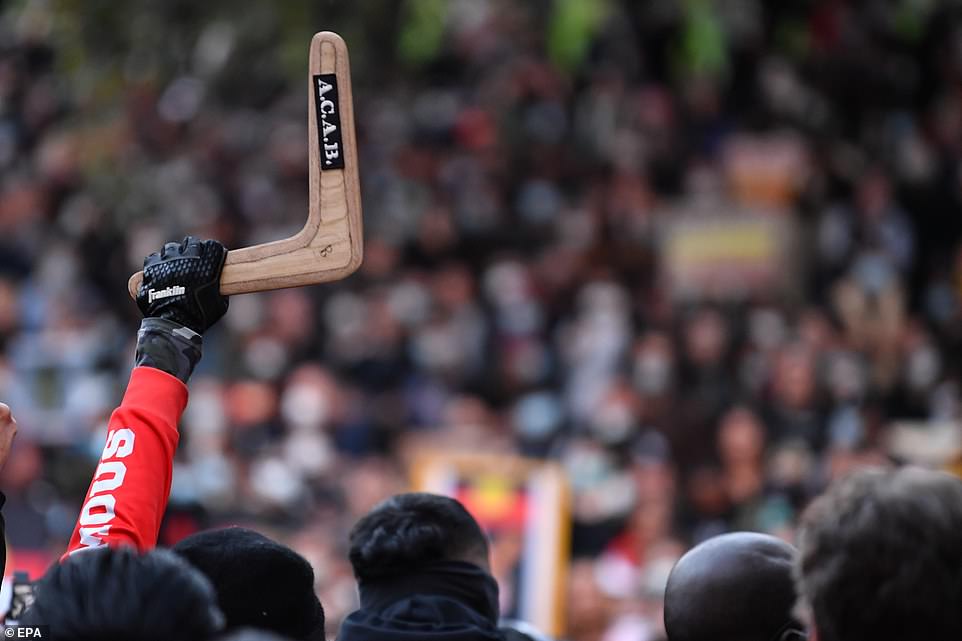 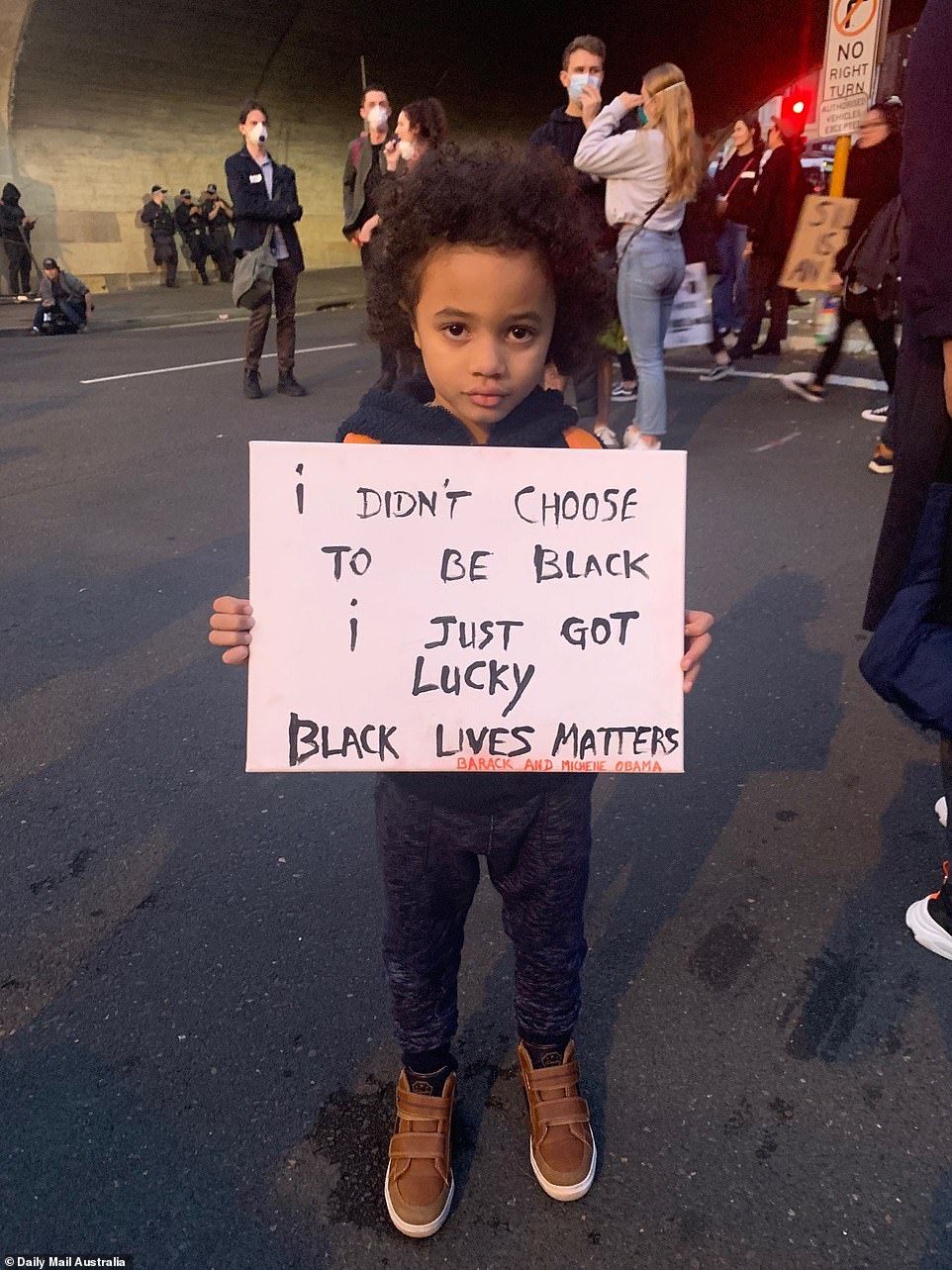 A young child in Sydney is seen carrying a sign saying ‘I didn’t choose to be black, I just got lucky’

Protesters are calling for an end to Aboriginal deaths in custody and in solidarity with the Black Lives Matter movement.

NSW’s highest court had banned the Sydney protest because it breaches COVID-19 restrictions.

At least 432 Aboriginal and Torres Strait Islander people have died in police custody in Australia since the Royal Commission into Aboriginal Deaths in Custody report in 1991.

One man was booed after he raised an ‘All Lives Matter’ placard as a counter-protest. He had his sign ripped from his hand and was handcuffed and led away by officers.

‘Get those animals off those horses!’ another man screamed at police outside Sydney’s Town Hall.

A small child who attended the protest was seen carrying a sign which read: ‘I didn’t choose to be black, I just got lucky’.

One woman told Daily Mail Australia the problems with racial inequality in the US were similar to ones experienced in Australia.

‘I think this has been an issue forever [in Australia].

‘In light of what happens on invasion day, it’s not a one off thing. It’s an ongoing issue we’ve got to keep fighting on.’ 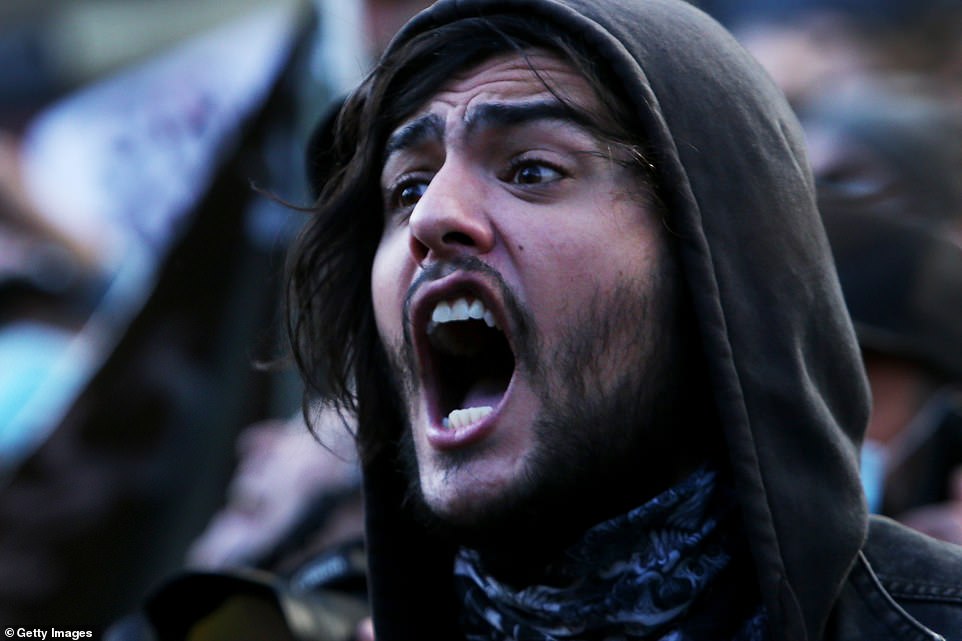 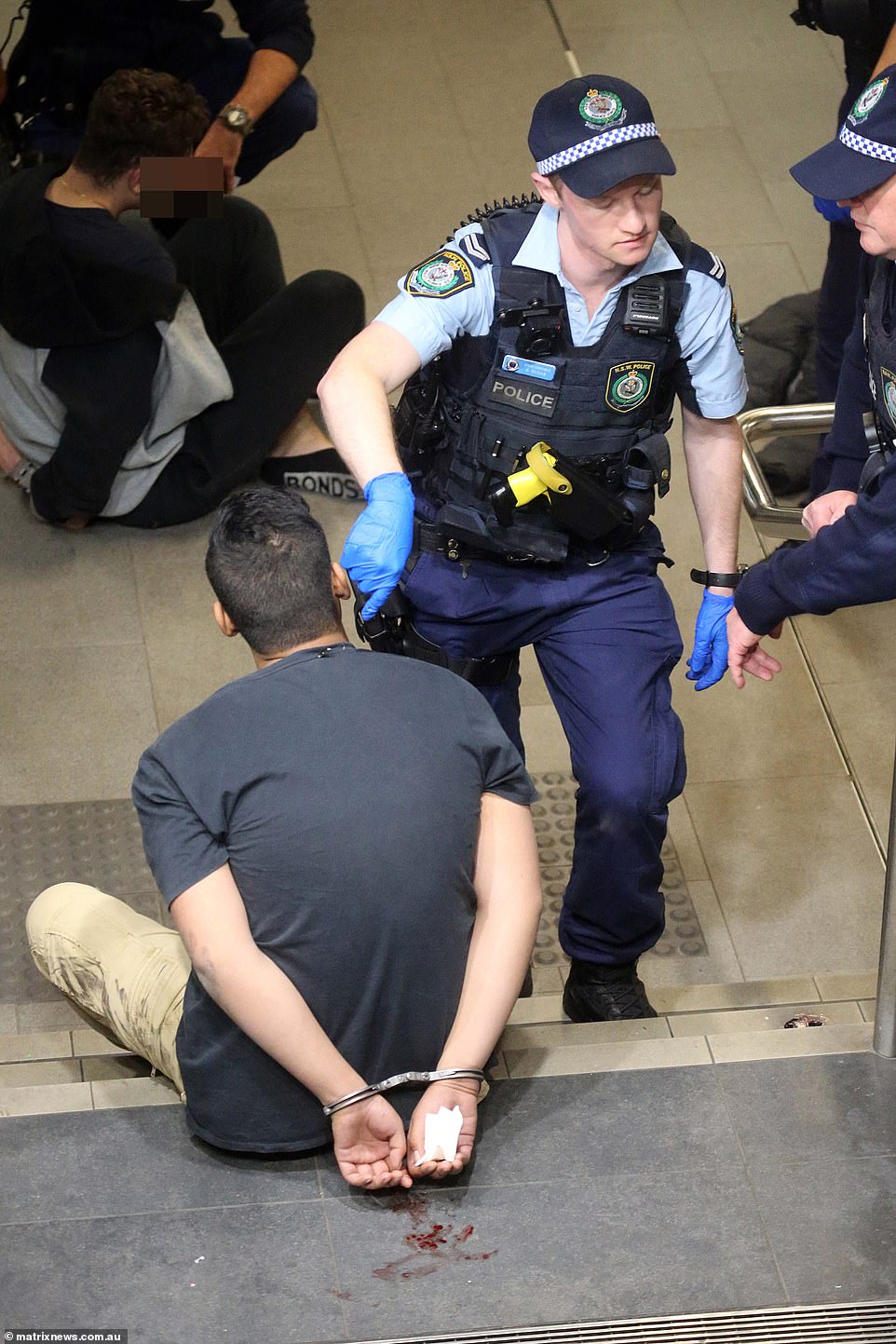 Two men were arrested at Town Hall Station before the protest started. Officers cuffed this man before leading him away 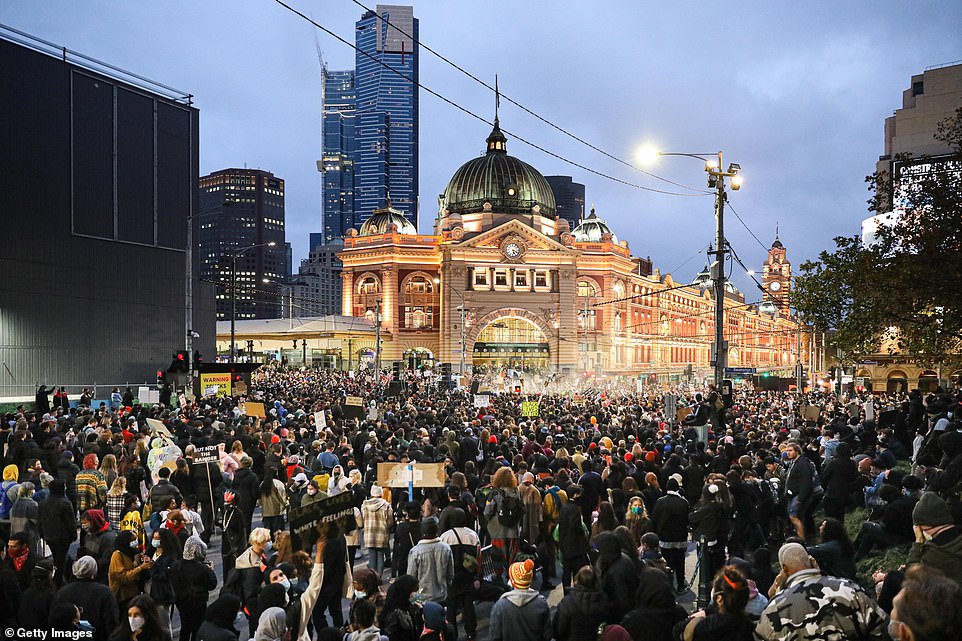 The nationwide protests kicked off with about 5,000 activists packing into Adelaide’s Victoria Square at 12pm on Saturday.

Speaker Jack Buckskin welcomed the large turnout, telling the gathering whether Aboriginal or non-Aboriginal, they were all part of the same society.

‘This is about us coming together as people,’ he said.

‘Today we stand united. Our movement happens with people.

‘We want people to walk alongside us. This is what Aboriginal people have been asking for.’

There was a strong police presence with a police helicopter overhead. The mood among protesters and police was peaceful.

Kaysee Rankine, 17, of Peterhead, joined the protests in hopes of bringing upon change and that people can just come together.

‘My mother is part of the stolen generation … so it’s really important to me and it matters,’ she told The Advertiser.

‘Racism is a big thing obviously (but) we are all the same and we should all just come together.’

Tabitha Gallagher, 16, of Taperoo, doesn’t understand why the marches needed to happen as we are all humans.

‘We shouldn’t have to be doing these marches – it should already be settled,’ she said.

‘People are people. You don’t judge them from their skin colour, you see them as people.’ 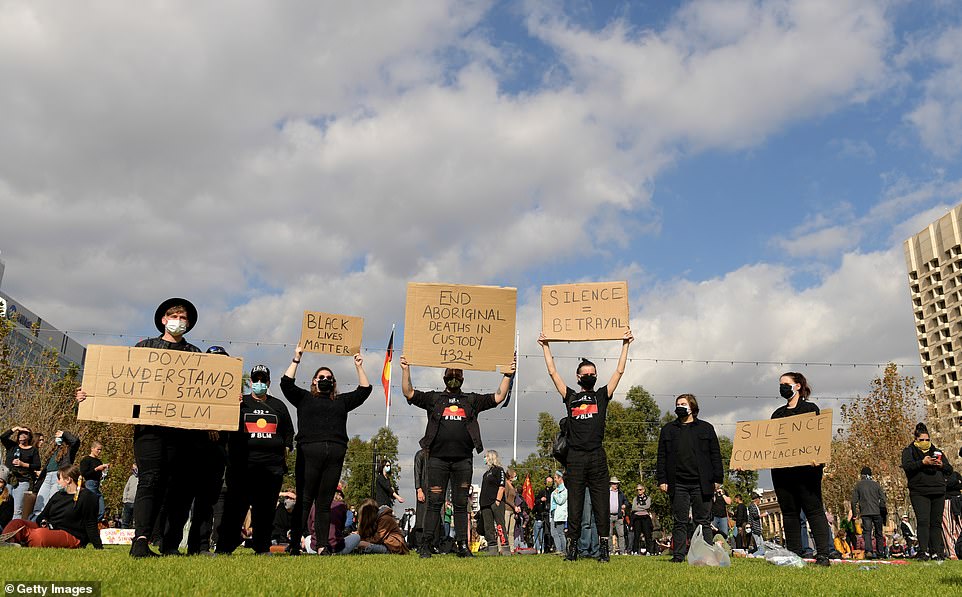 Tens of thousands of Australians across the country are calling for the end of Aboriginal deaths in custody. Pictured: The Adelaide protest 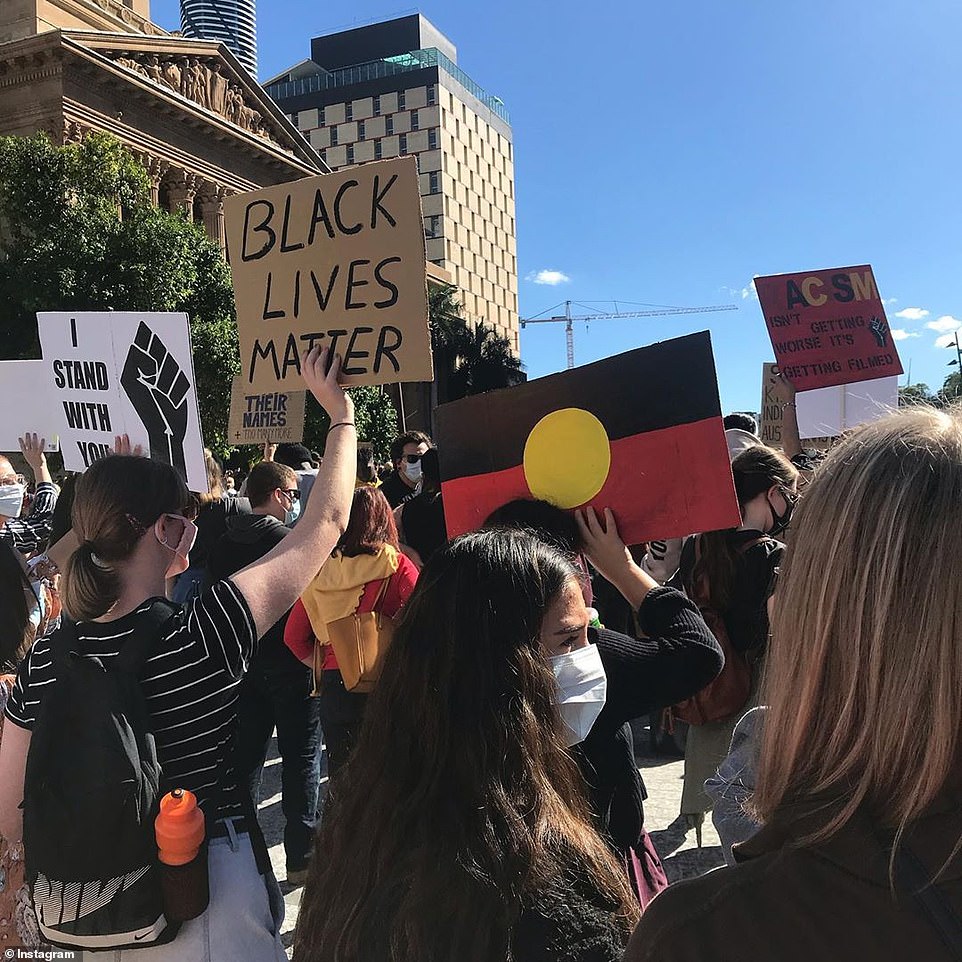 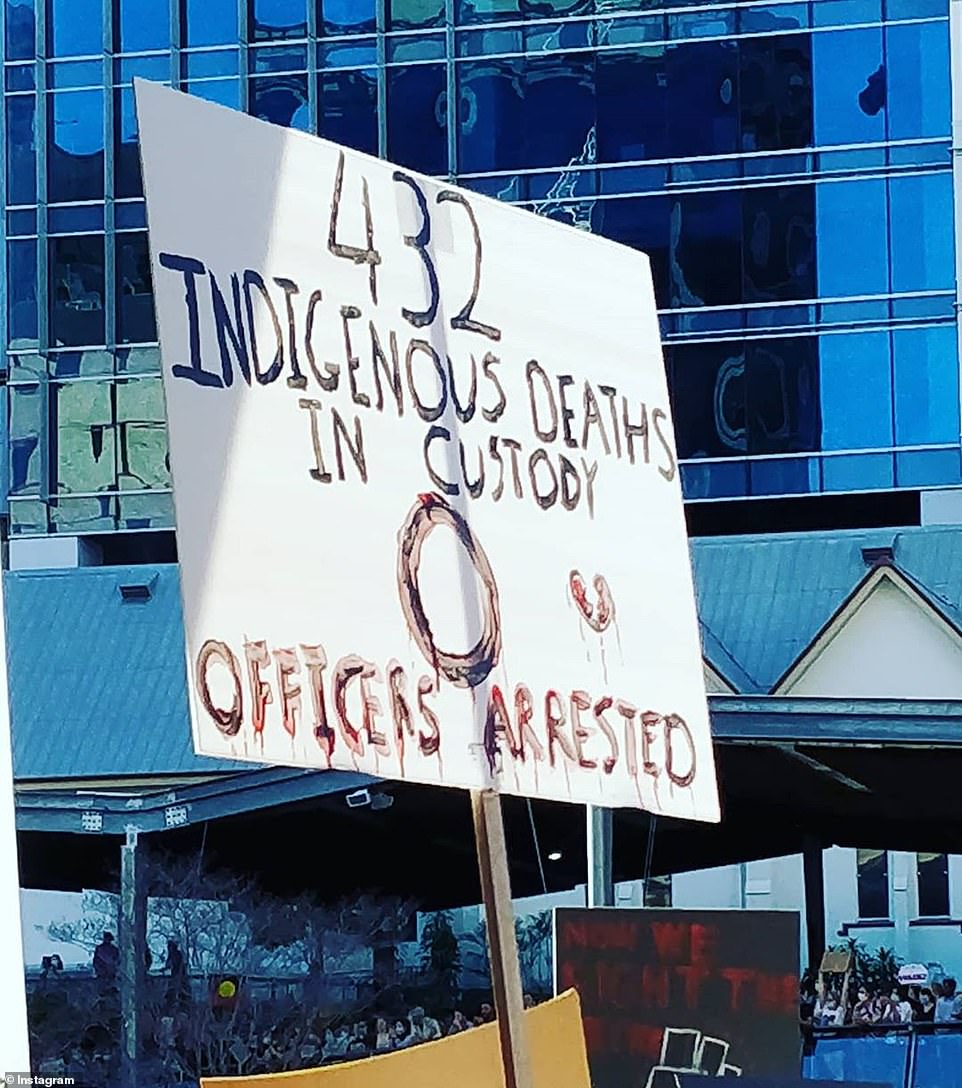 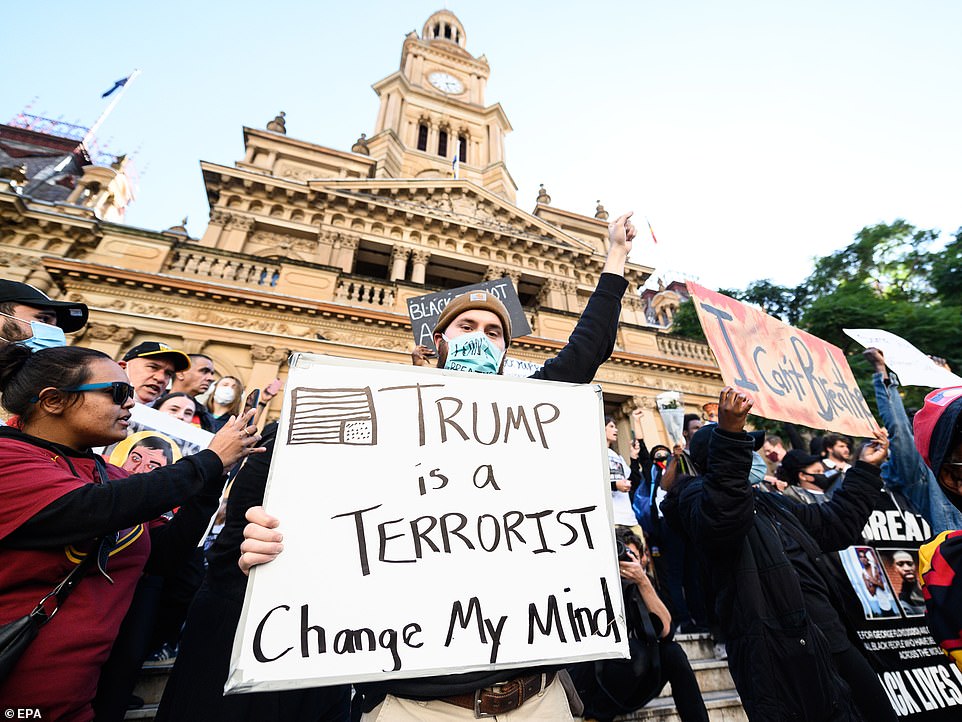 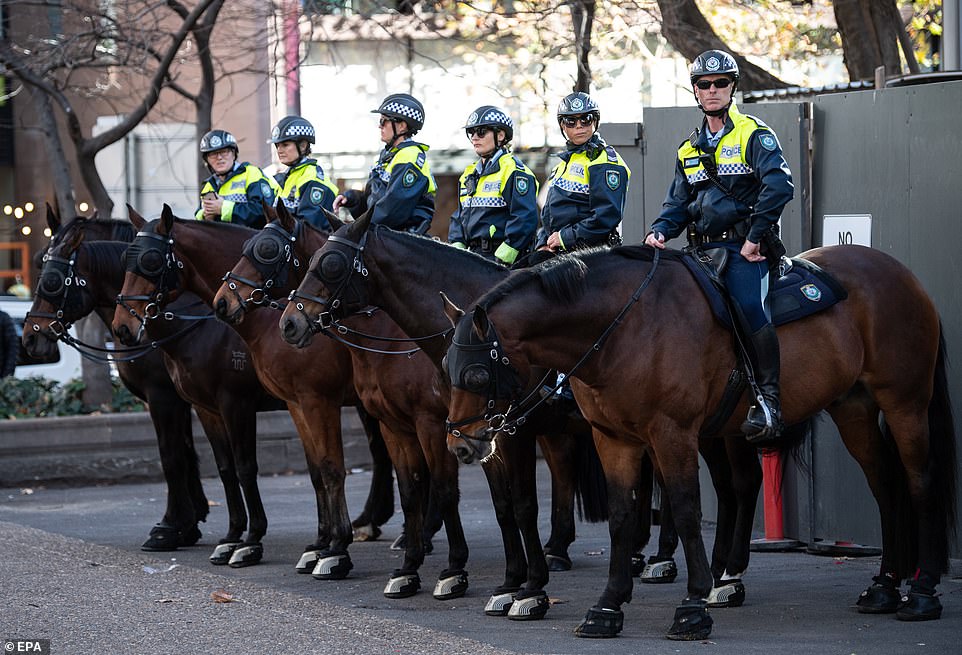 There was a large police presence in Sydney on Saturday. These mounted police officers watched calmly as the peaceful protest got underway

‘RENT-A-CROWD WILL ONLY MOVE AUSTRALIA BACKWARDS’

Indigenous academic Anthony Dillon has said the protests are ‘ridiculous’.

Writing for news.com.au he said that many protesters were not across the real issues and were protesting for the sake of it.

Mr Dillon pointed to research by the Australian Government that shows Aboriginal people are less likely to die in police custody than white people.

‘What we are seeing now is ridiculous,’ he wrote.

‘If this was just a comedy show I would be laughing.

‘But the antics of activists, social justice warriors, and their rent-a-crowds only move Australia backwards.’

Protesters held up banners with slogans such as ‘we all bleed the same colour’, ‘injustice anywhere is a threat to justice everywhere’ and ‘tolerating racism is racism’.

Commissioner Grant Stevens granted permission for the BLM protest to proceed in Adelaide, despite the pandemic.

‘This is a unique and extraordinary event. There is a sentiment that suggests people should have a right to protest on significant matters,’ Mr Stevens said on Friday.

Thousands of Queenslanders gathered at King George Square as part of the movement at 1pm on Saturday.

Police and the Queensland premier said they would have preferred for people show their support online but would not stop the march against First Nations deaths in custody, and violence and systemic racism towards black people.

Organisers in Brisbane vowed to storm a police station until the officer in charge leaves the station and flies the Aboriginal flag, Courier Mail reported.

The crowds were  also heard chanting ‘f–k the pigs’ and ‘KKK’ as the passionate protesters rallied.

Quaden Bayles and his mother Yarraka were pictured at the Brisbane protest for Black Lives Matter.

Quaden, who has the most common type of dwarfism called achondroplasia, made international headlines in February when his mother  filmed him saying he wanted to die after kids picked on him at school. 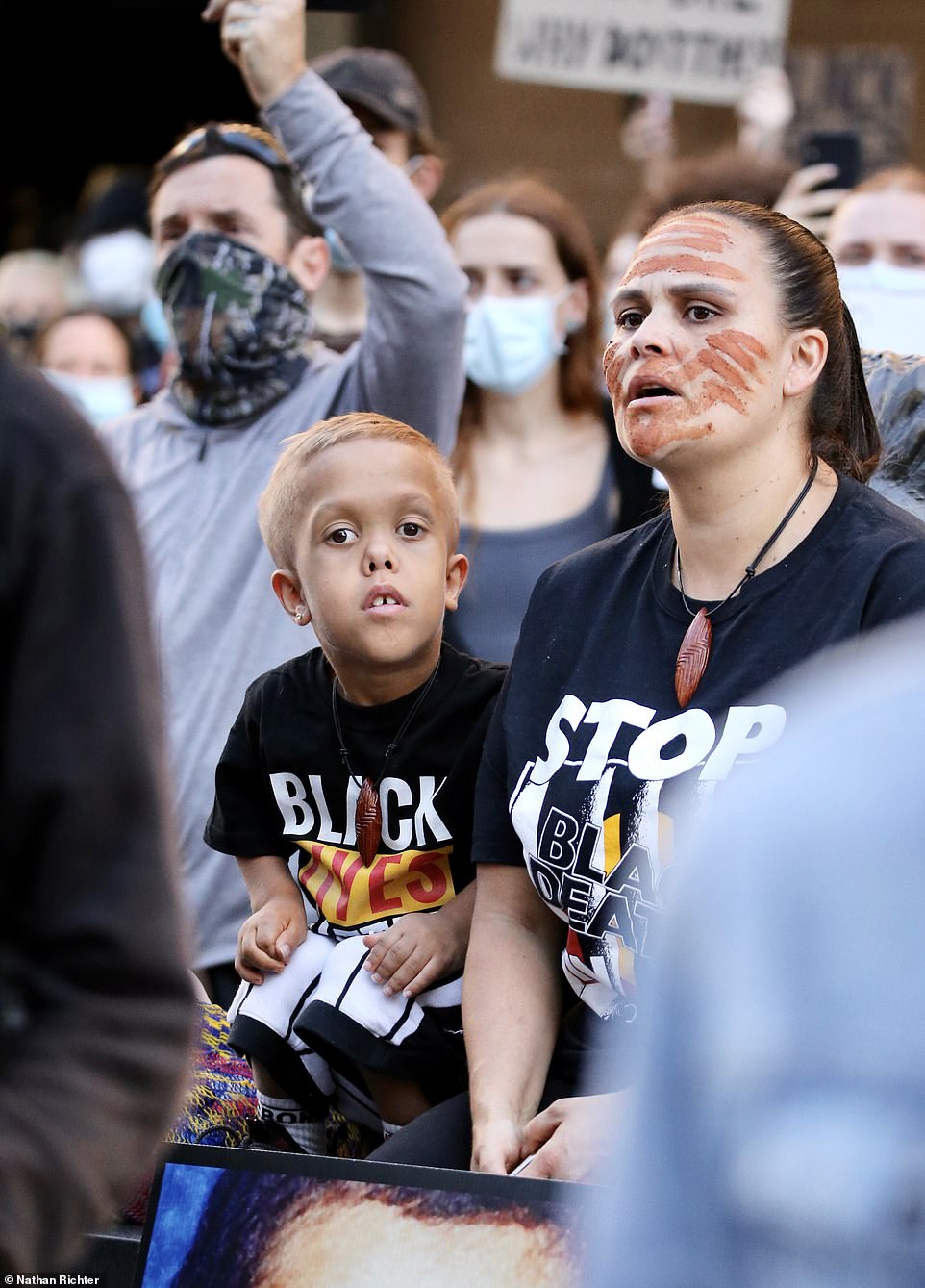 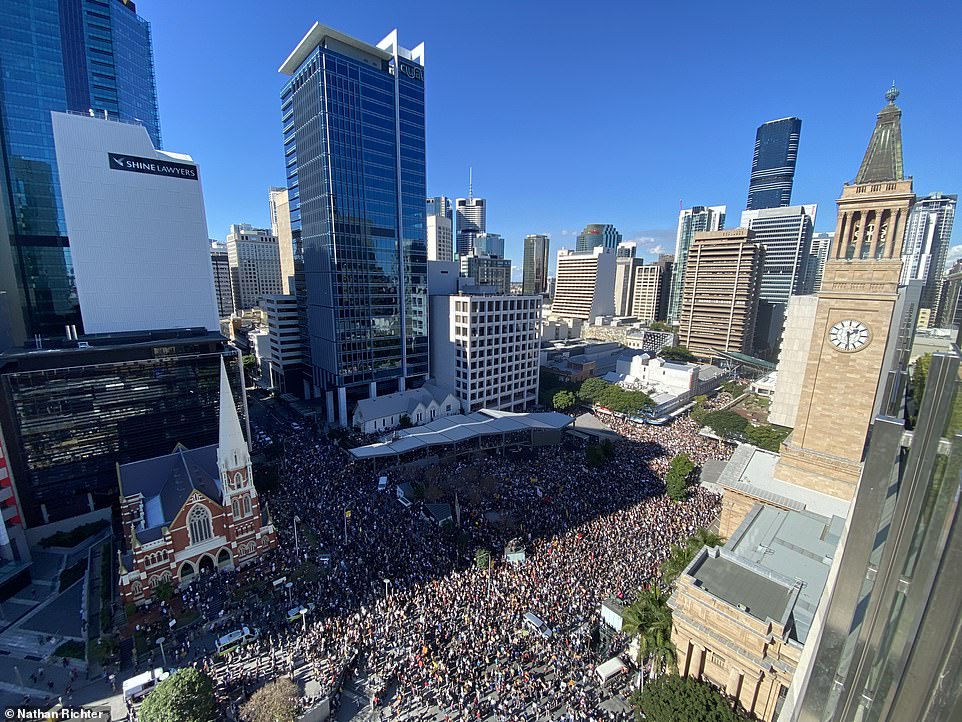 An aerial shot of protestors at the Black Lives Matter rally in Brisbane on Saturday where an estimated 30,000 people attended 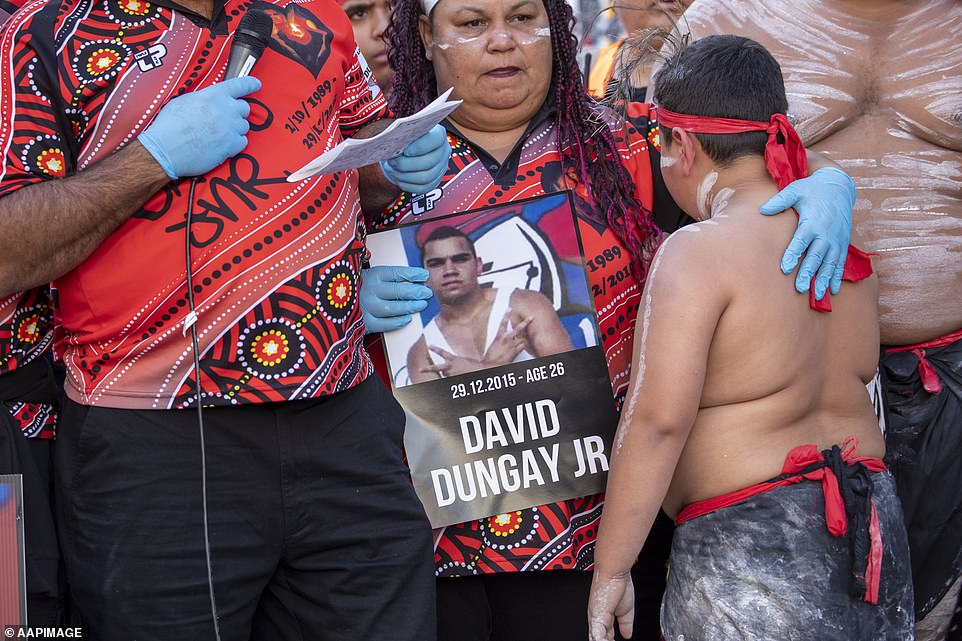 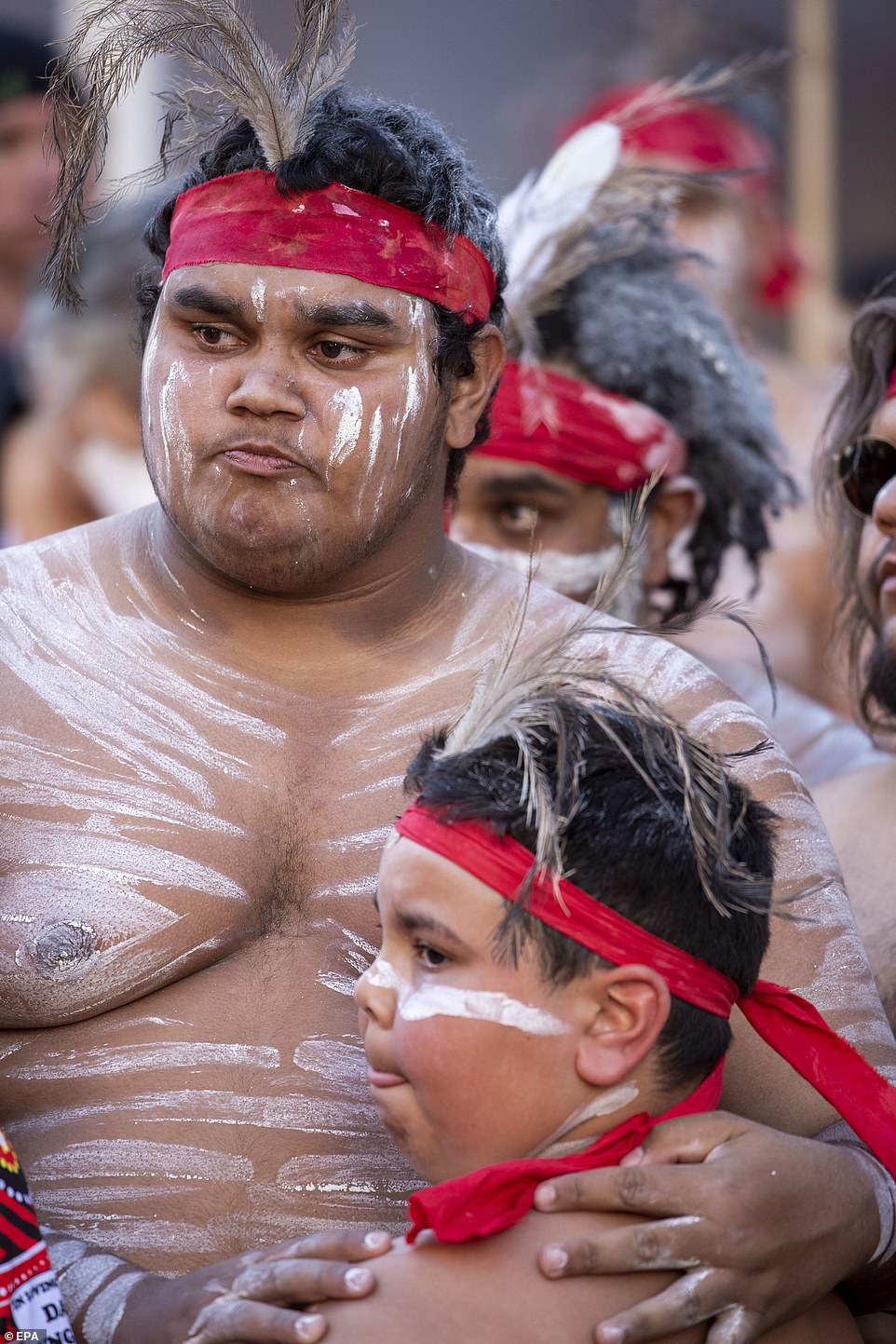 The protest started outside the Victorian Parliament where Aboriginals of the tribe native to Melbourne, the Wurundjeri, addressed the crowd.

Organiser Meriki Onus, who was wearing a shirt saying ‘destroy white supremacy’ then addressed the crowds.

‘Aboriginal people are subjected to police brutality and racist police practices and we have had enough. Black lives matter,’ Ms Onus said.

‘We’ve got the media on us. We’re in this together.’ 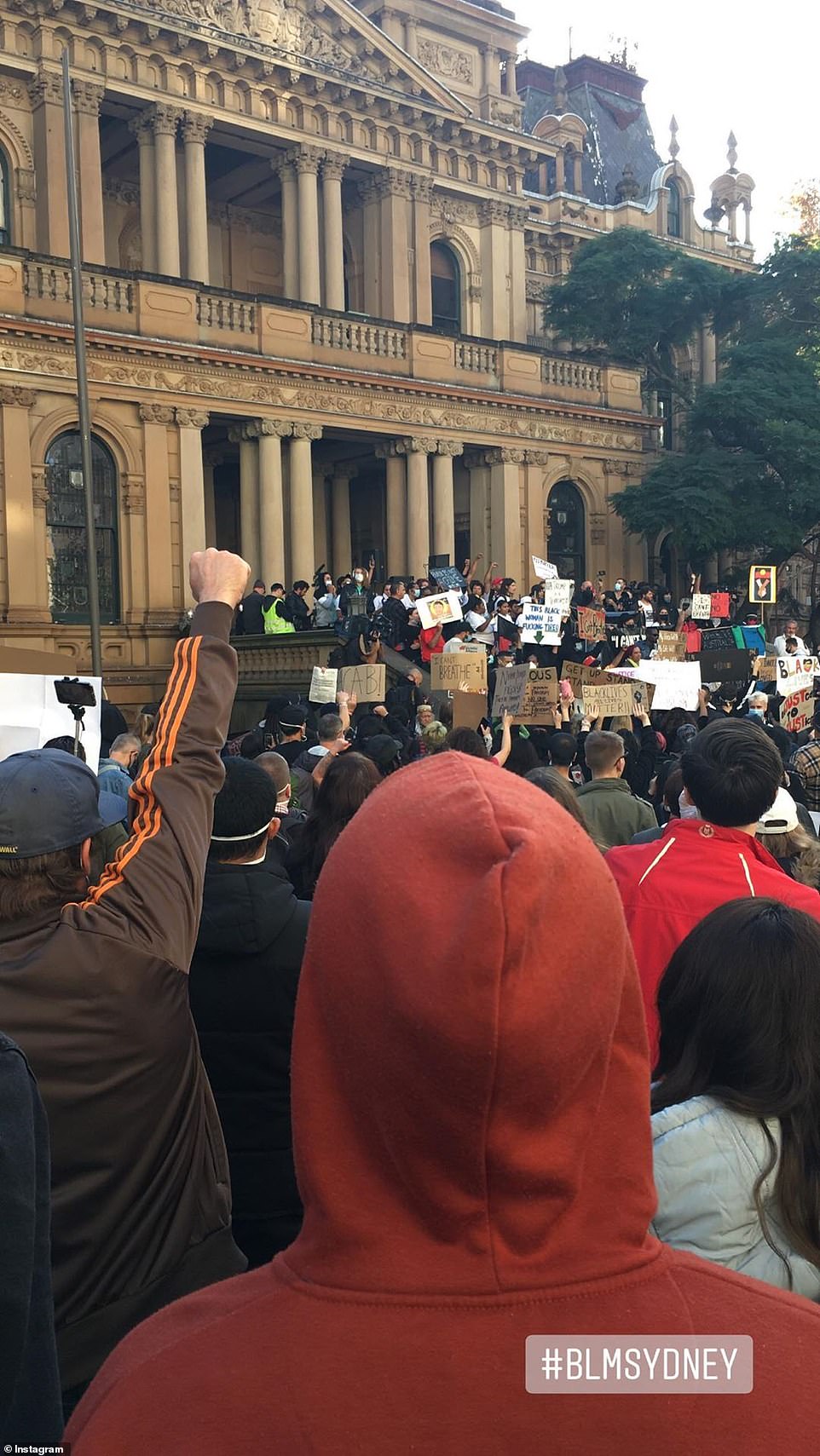 At 3pm, thousands of protesters gathered at Sydney’s town hall chanting ‘Black Lives Matter’, ‘No justice, no peace’ and ‘I can’t breathe’ 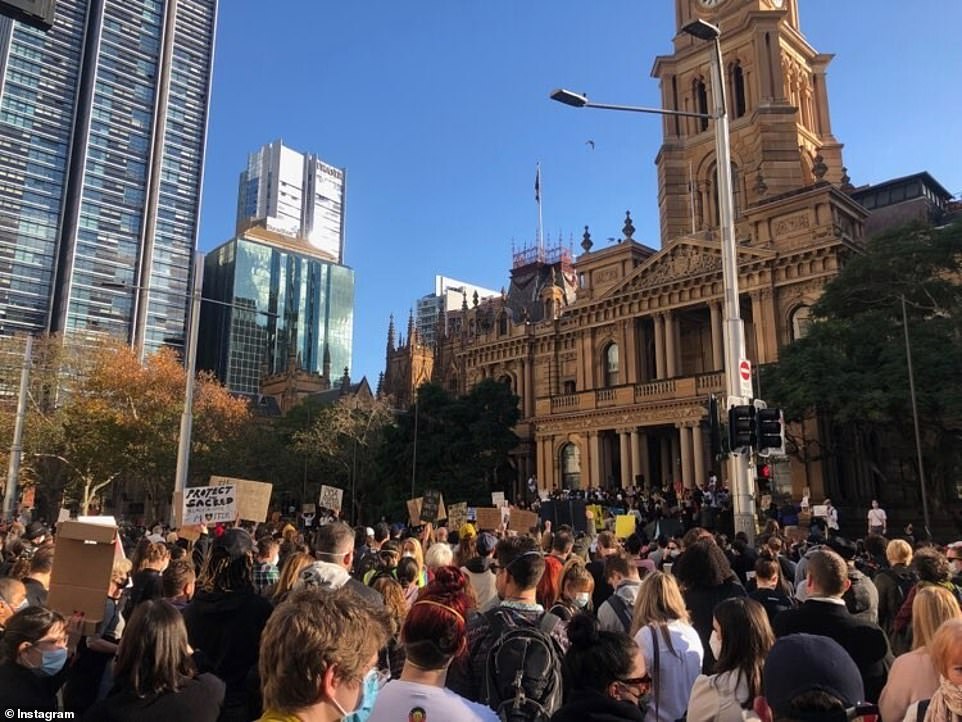 In Sydney protesters were trying to keep their space but the sheer volume of the crowds makes it impossible to stay 1.5 metres from one another.

A couple were also spotted getting married as crowds descended on the streets.

Speeches by indigenous Australians were met with claps and cheers by the crowd.

Protesters remained quiet throughout the speeches and avoided moving through the crowds.

Organisers advised protesters to try and move in groups of 10 at a time as the march kicks off.

At 4:30pm protesters took a knee for one-minute to recognise the 434 Indigenous deaths in custody since 1991.

Footage from the scene showed the crowd on their knees and hands up in the air. One woman noticed police remained standing and called them out for it.

‘Not one of you have the guts to put your hands up,’ she said.

‘Raise your fists and show your support but not one of you have the guts or the courage to show us here today that you care about black people in this country.

‘If you care you will raise your fist and say black lives matter.’ 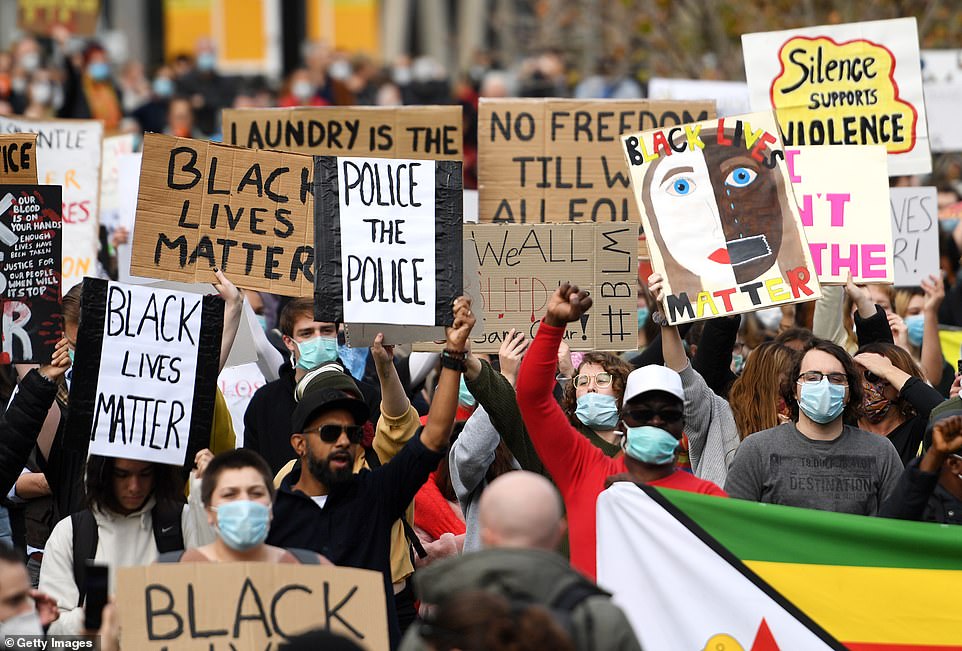 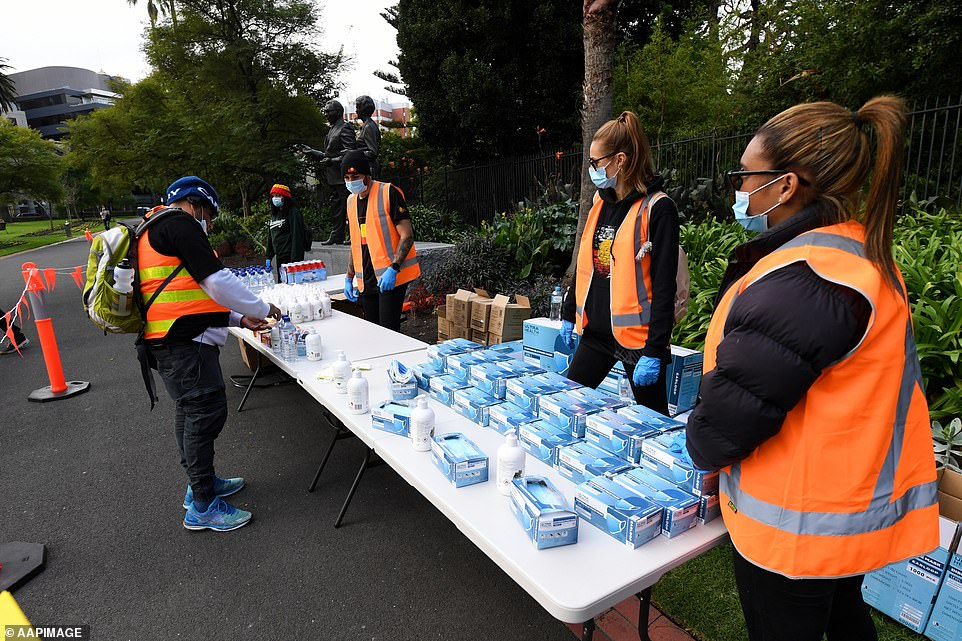 Protest organisers Warriors of the Aboriginal Resistance have stressed safety of the community is paramount while also insisting the event outside Victoria’s Parliament House will go ahead. Pictured: A hand sanitiser station at the Melbourne protest 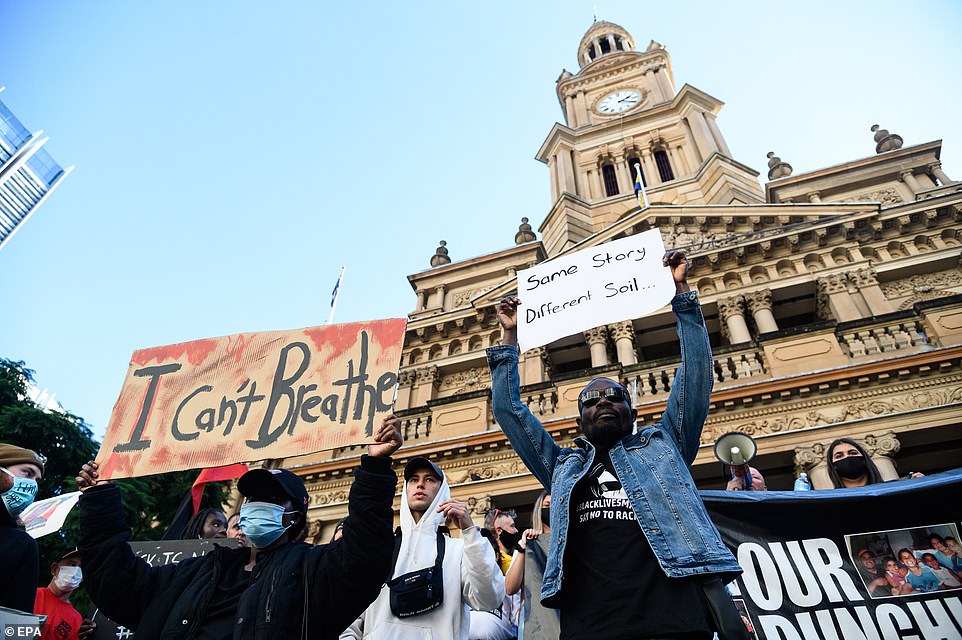 WHERE ARE THE PROTESTS PLANNED IN AUSTRALIA?

Protests are set to go ahead in several Australian cities, but Sydney has now banned its planned protest.

Professor Murphy said that while people had the right to protest, mass gatherings were dangerous in the midst of a pandemic.

Protest organisers Warriors of the Aboriginal Resistance have stressed safety of the community is paramount while also insisting the event outside Victoria’s Parliament House will go ahead.

Victoria Police have warned rally organisers could be fined $1,651 because of COVID-19 restrictions and that fines could also be issued to individuals.

One person with COVID-19 at Saturday’s rally could be all it takes to squander the gains made, Chief Health Officer Brett Sutton has warned. 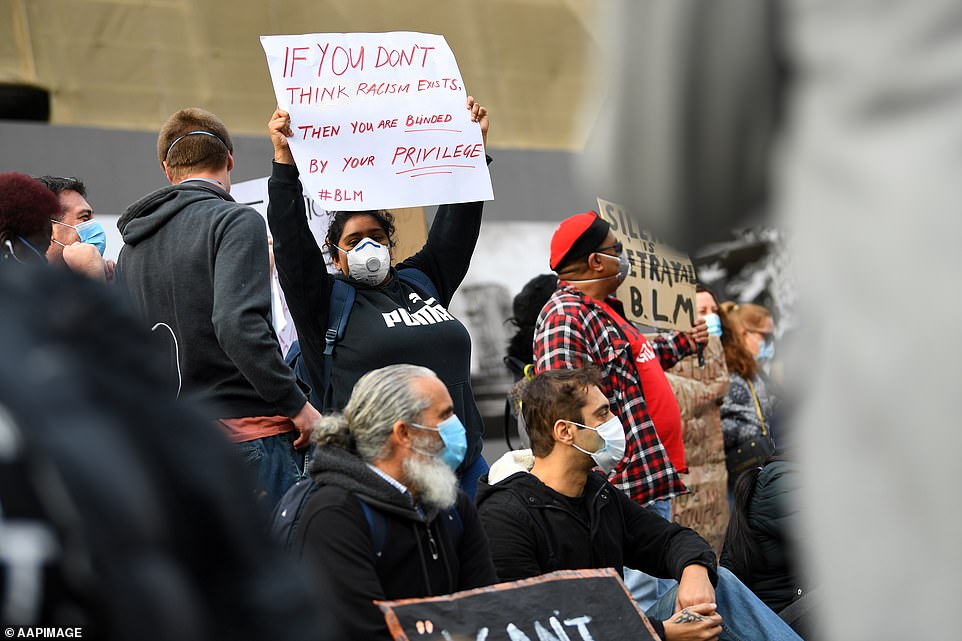 A woman holds a sign which reads: ‘If you don’t think racism exists, then you are blinded by your privilege’

Hundreds have registered their interest in attending a candlelight vigil on the lawns of Parliament House in Hobart.

Opposition Leader Anthony Albanese said there are a range of ways which people can make their feelings known.

‘I support the right to protest but I also support making sure that we don’t have a second wave, we need to be very conscious about health outcomes,’ Mr Albanese told reporters in Queanbeyan on Saturday.

‘You don’t want people going to a protest and getting sick as a result of it, you don’t want also there to be an outbreak and for that to spread around.’ 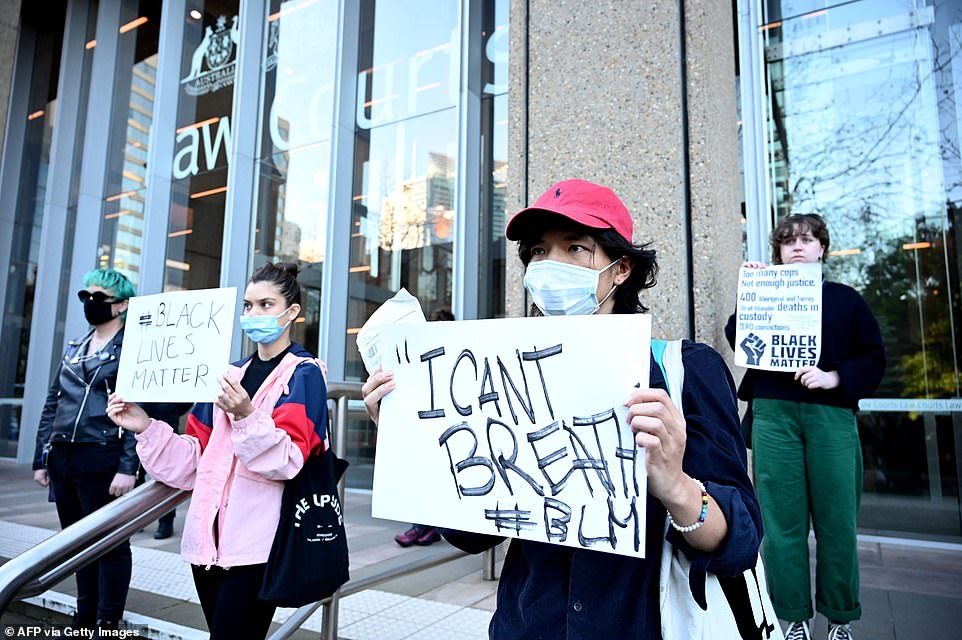 Protesters are pictured outside the Supreme Court in Sydney on June 5 holding up signs (pictured), ahead of Sydney’s Black Lives Matter protest on June 6