A black man holding an American flag has been filmed telling protesters in Portland ‘none of you guys represent Black lives’.

The unidentified demonstrator stood outside the Federal Courthouse on Saturday evening, footage shared on Twitter shows. In the clip he attempts to protect the building from vandals who tore down a fence.

Portland has seen nearly two months of nightly protests since the killing of George Floyd in Minneapolis. Late Saturday, demonstrators broke into a building, set it on fire and started dumpster fires, police said.

He adds: ‘“t’s going on every day. If you don’t want to get gassed, stop! It has to stop! None of you guys represent Black lives.’

Fencing that had been placed around the federal courthouse was removed by protesters Saturday and made into barricades, police tweeted. 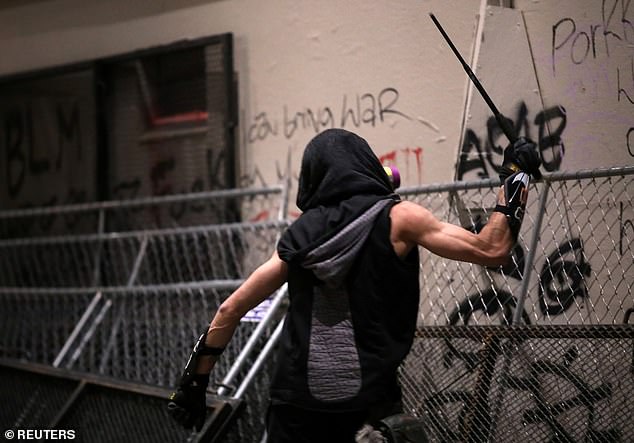 A demonstrator hits pieces of fencing blocking a door used by federal law enforcement officers deployed under the Trump administration’s executive order to protect federal monuments and buildings, during a protest overnight Saturday 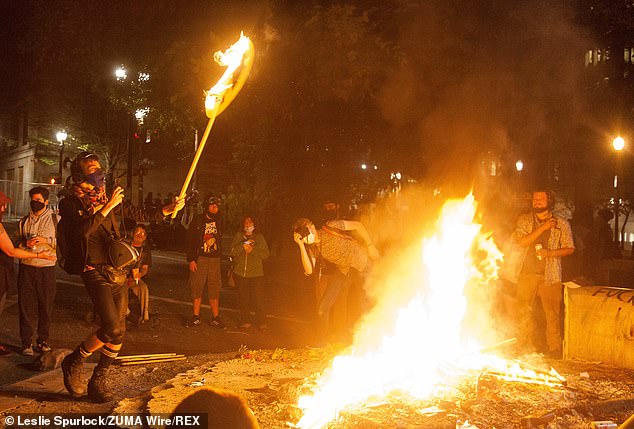 The mayor of Portland said Sunday the presence of federal agents is exacerbating tensions in Portland. Speaking on CNN’s Democrat Ted Wheeler said federal officers ‘are not wanted here. We haven’t asked them here. In fact, we want them to leave.’

He said: ‘Well, the president has a complete misunderstanding of cause and effect. What’s happening here is, we have dozens, if not hundreds of federal troops descending upon our city. And what they’re doing is, they are sharply escalating the situation. Their presence here is actually leading to more violence and more vandalism.

‘And it’s not helping the situation at all. They’re not wanted here. We haven’t asked them here. In fact, we want them to leave. What we’re seeing is a blatant abuse of police tactics by the federal government, by a Trump administration that’s falling in the polls. And this is a direct threat to our democracy.’

President Donald Trump has decried the demonstrations, and Homeland Security Secretary Chad Wolf blasted the protesters as ‘lawless anarchists’ in a visit to the city on Thursday.

‘We are trying to help Portland, not hurt it,’ Trump tweeted Sunday. ‘Their leadership has, for months, lost control of the anarchists and agitators. They are missing in action. We must protect Federal property, AND OUR PEOPLE. These were not merely protesters, these are the real deal!’

A fire at the Portland Police Association building was put out a short time later, Portland police said on Twitter Saturday. The department declared the gathering a riot, and began working to clear the downtown area.

‘As the crowd was dispersed, several people in the crowd were arrested and officers were able to extinguish the fire. Portland Police did not use any CS gas,’ the bureau said in a statement early Sunday.

Tear gas was deployed, according to pictures and video from the scene, but it was not necessarily CS gas. 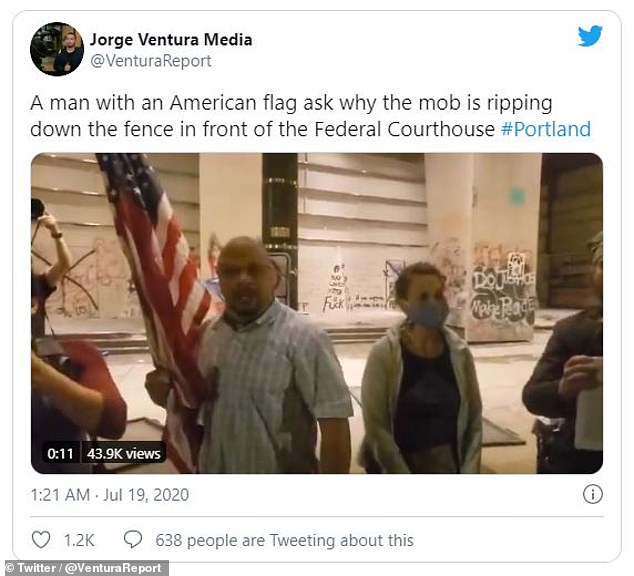 The unidentified demonstrator stood outside the Federal Courthouse on Saturday evening, footage shared on Twitter shows. In the clip he attempts to protect the building 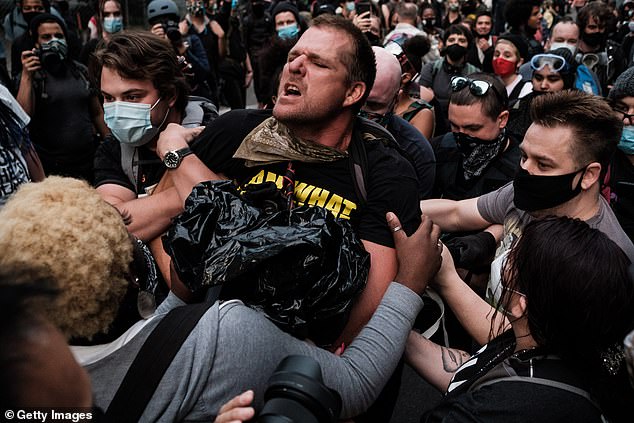 Portland has seen nearly two months of nightly protests since the killing of George Floyd in Minneapolis. Protesters are pictured on Friday night 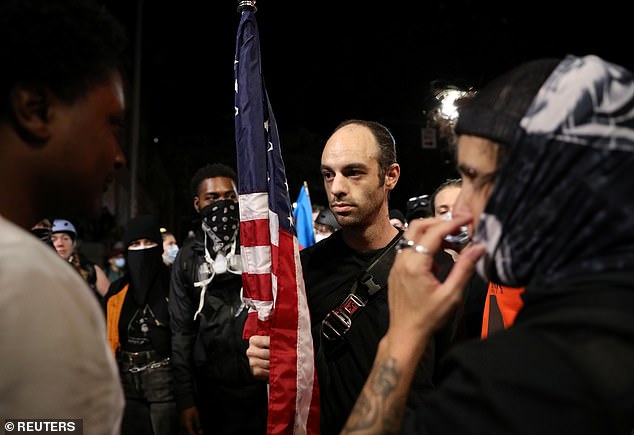 Later, as police dispersed a group that had gathered near North Interstate Avenue, people threw rocks and paint-filled balloons at officers. Some were injured, the statement said.

Before the aggressive language and action from federal officials, the unrest had frustrated Wheeler and other local authorities, who had said a small cadre of violent activists were drowning out the message of peaceful protesters in the city. But Wheeler said the federal presence in the city is now exacerbating a tense situation.

‘What we’re seeing is a blatant abuse of police tactics by the federal government, Wheeler said Sunday.

The complaint said unidentified federal agents have grabbed people off Portland’s streets ‘without warning or explanation, without a warrant, and without providing any way to determine who is directing this action.’ 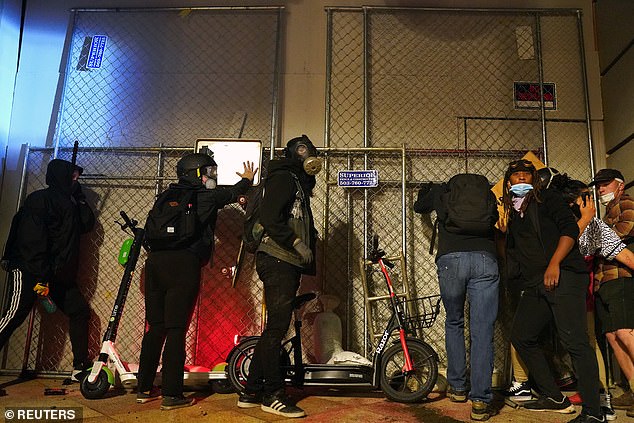 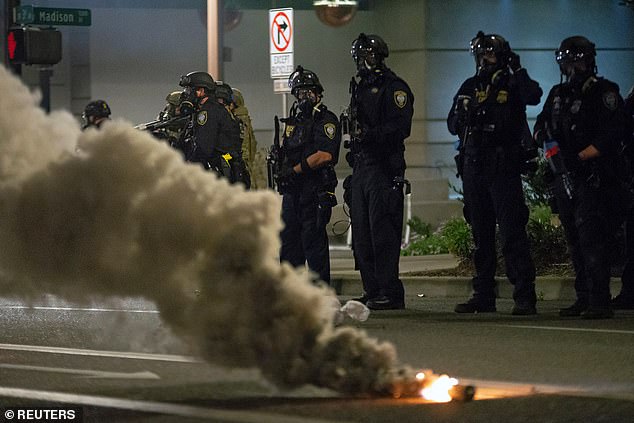 The action by Portland’s police was condemned by Jo Ann Hardesty, a prominent member of the City Council. Hardesty said Saturday that local police ‘joined in the aggressive clampdown of peaceful protest.’

Hardesty also slammed Wheeler, telling the mayor he needed to better control local law enforcement. Hardesty, who oversees the city’s fire department and other first-responder agencies, said in an open letter to Wheeler if ‘you can’t control the police, give me the Portland Police Bureau.’