Tensions are running high in Louisville on Saturday as police sealed off several roads in the downtown area where a black militia group carrying semiautomatic weapons and a far-right organization that is also carrying heavy firearms are holding a protest and a counter-demonstration.

The simultaneous demonstrations in Louisville by the Atlanta-based ‘Not F*****g Around Coaltion’ and the right-wing ‘Three Percenters’ organization are taking place a day after some 76 protesters were arrested on Friday.

As of early Saturday afternoon, at least two people were arrested by Louisville police officers. One of them, a Black Lives Matter supporter, allegedly tried to burst through a police barricade that was set up to divide the two opposite camps.

In recent weeks, scores of Black Lives Matter demonstrators have been demanding the arrest of the Louisville police officers involved in the fatal shooting of 26-year-old EMT Breonna Taylor.

‘Once it gets to that point where it looks like the government is non-responsive to the will of the people, the Constitution says to [form a] militia to address the grievances of the people,’ NFAC head John Fitzgerald ‘Jay’ Johnson, also known as Grand Master Jay, told WDRB-TV.

Members and supporters of an all-black militia group called NFAC hold an armed rally in Louisville, Kentucky, on Saturday 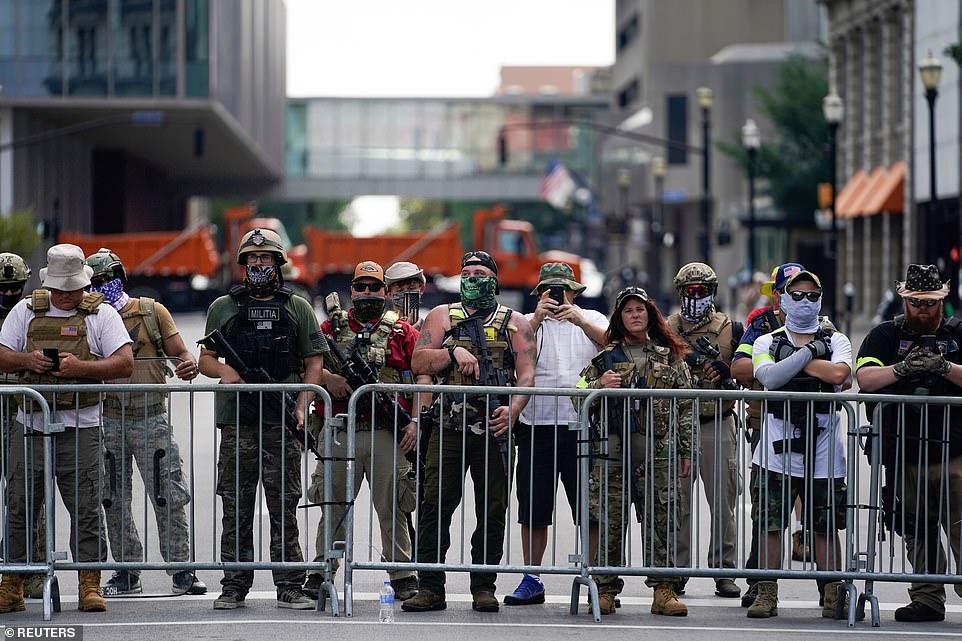 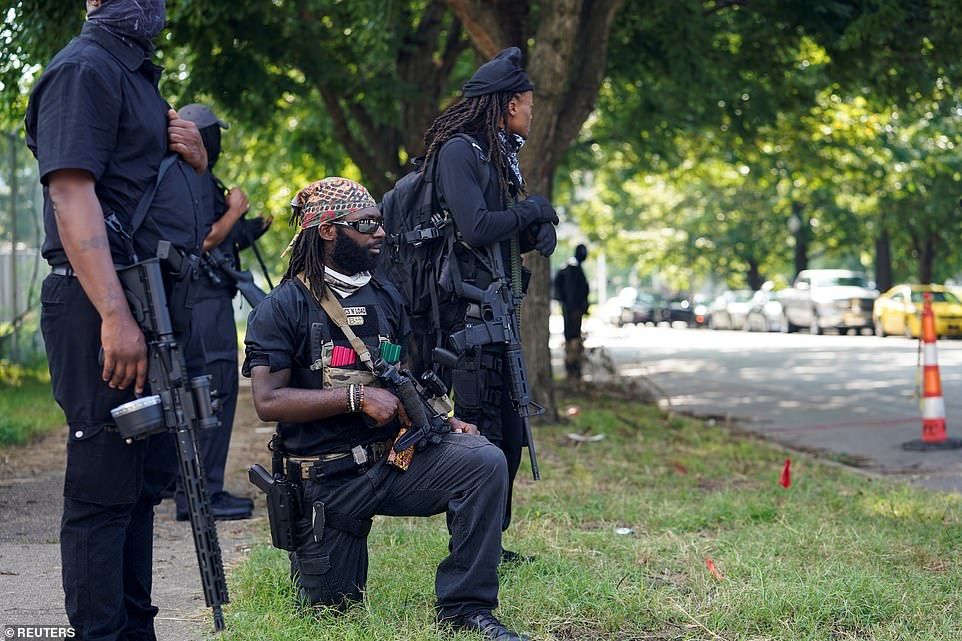 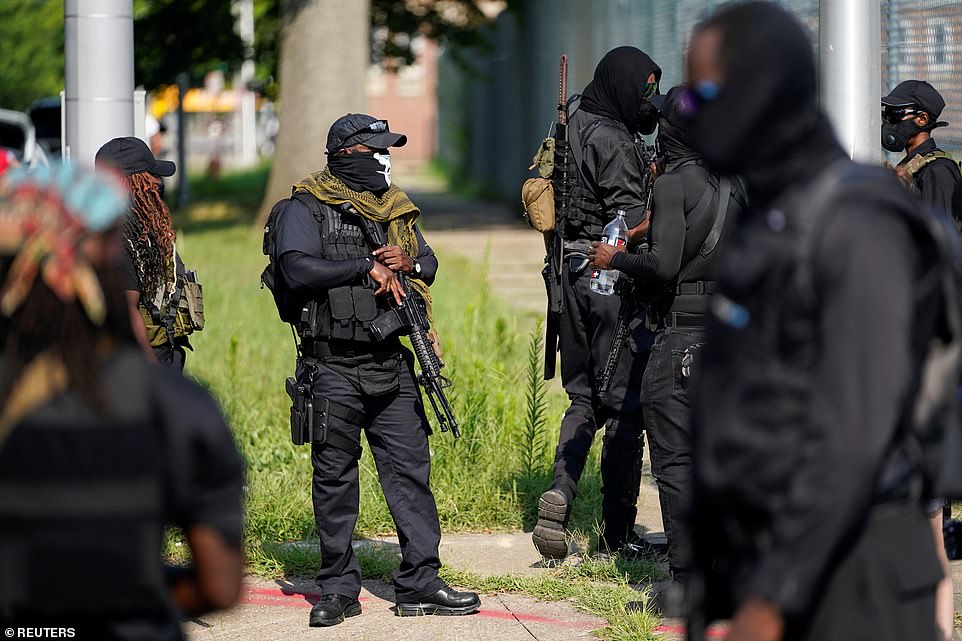 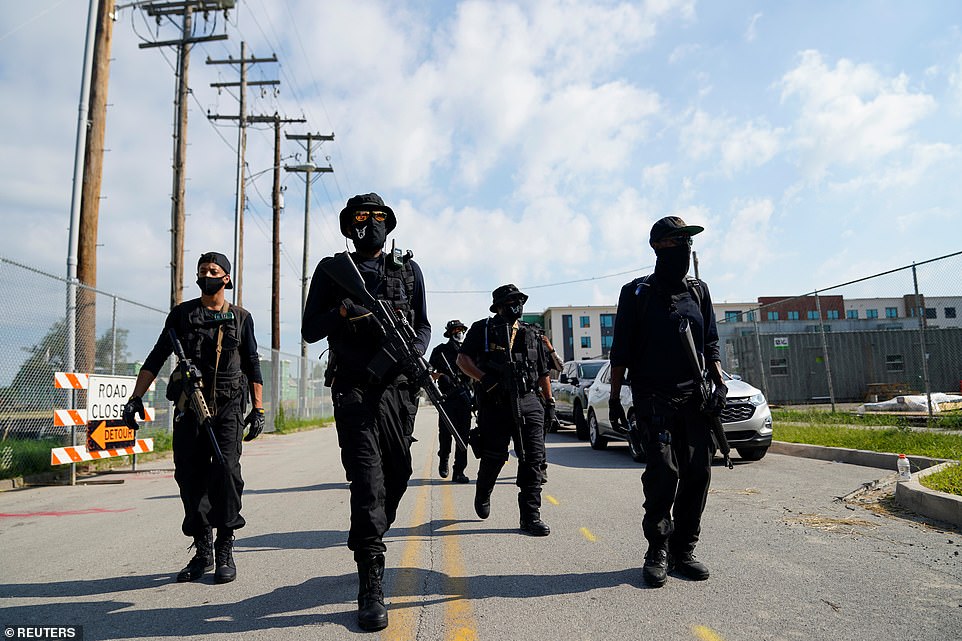 NFAC members are seen above during a rally outside Central High School in Louisville, Kentucky, on Saturday

‘I didn’t write it,’ Johnson said of the Constitution.

‘They (the founding fathers) wrote it. We just abide by it. So that’s our destination, because when it looks like the government is being indifferent to the people, the people have the right to form themselves – and arm themselves — to ask those questions.’

Taylor, a 26-year-old black woman, was fatally shot when police officers burst into her Louisville apartment using a no-knock warrant during a narcotics investigation.

The warrant to search her home was in connection with a suspect who did not live there and no drugs were found.

The shooting set off weeks of protests, policy changes and a call for the officers who shot Taylor to be criminally charged. 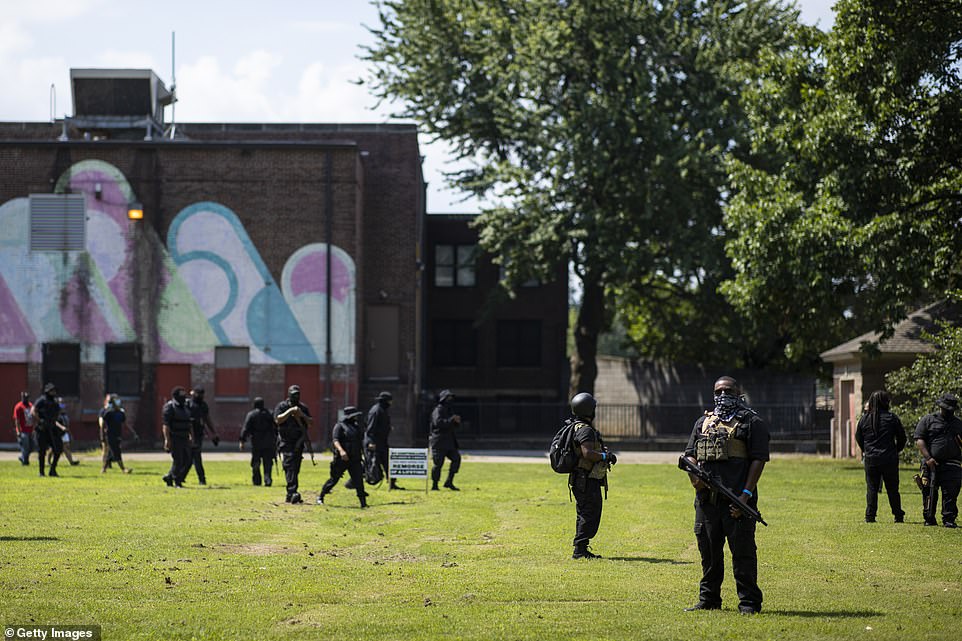 Armed members of the black militia NFAC are seen above just before a march in Louisville, Kentucky, on Saturday 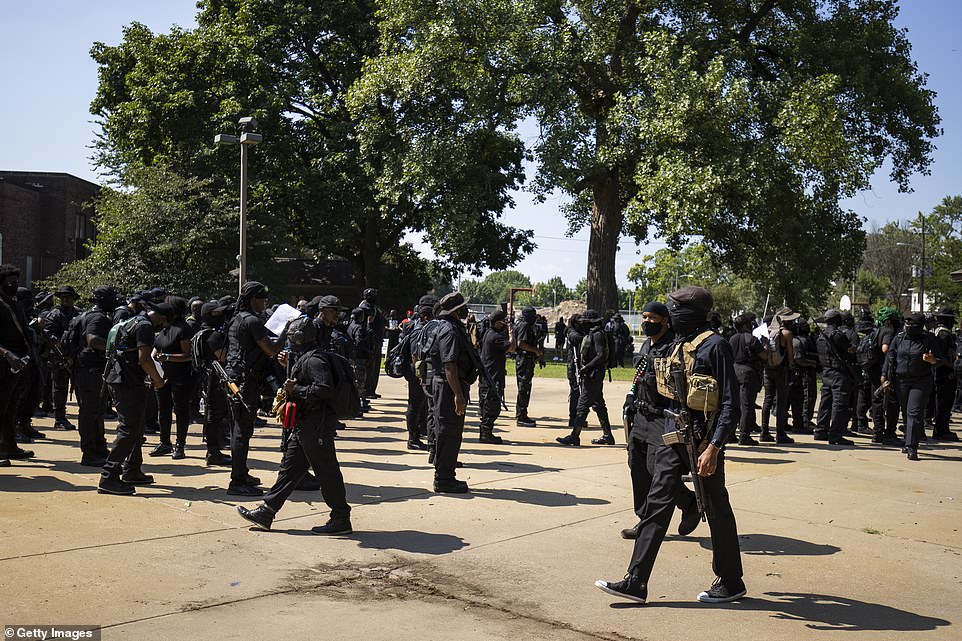 NFAC members are seen above lining up in formation during a march in Louisville, Kentucky, on Saturday 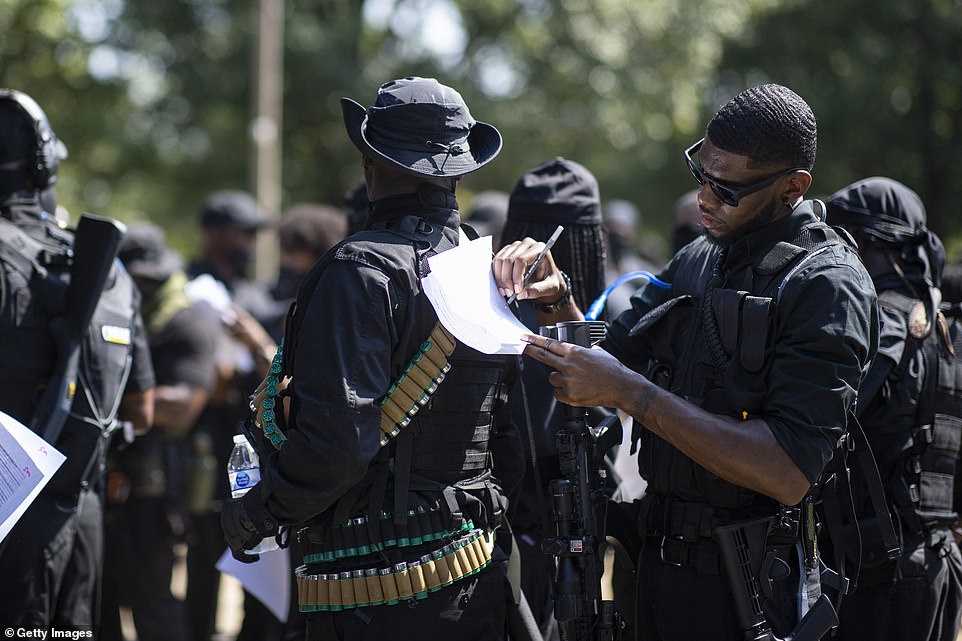 Armed members of the NFAC are seen above during a march in Louisville, Kentucky, on Saturday 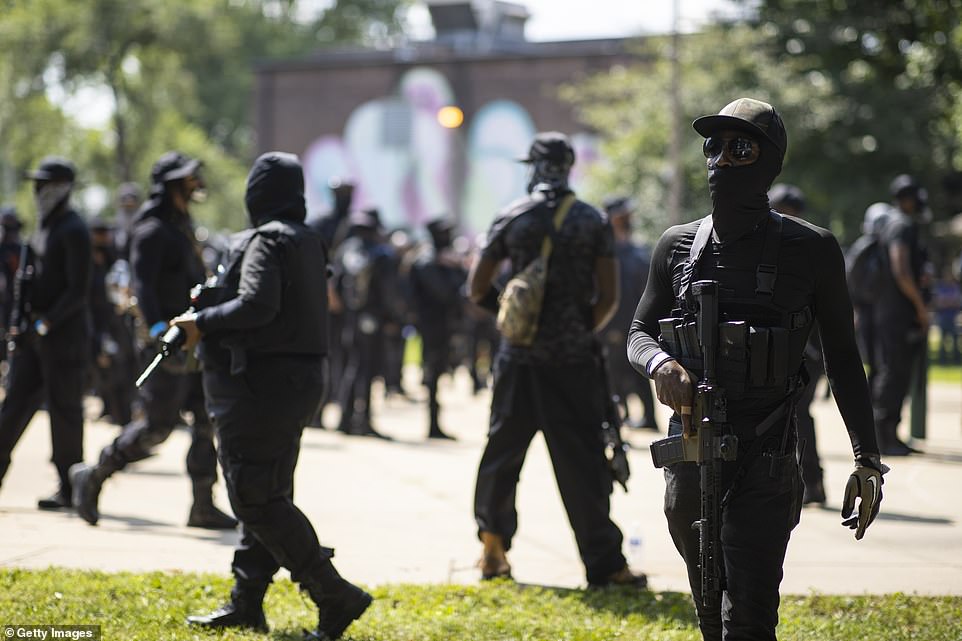 The NFAC, which is based in Atlanta, Georgia, is in Louisville, Kentucky, to back protests demanding the arrest of three police officers who fatally shot Breonna Taylor, a 26-year-old black EMT, in her home in March 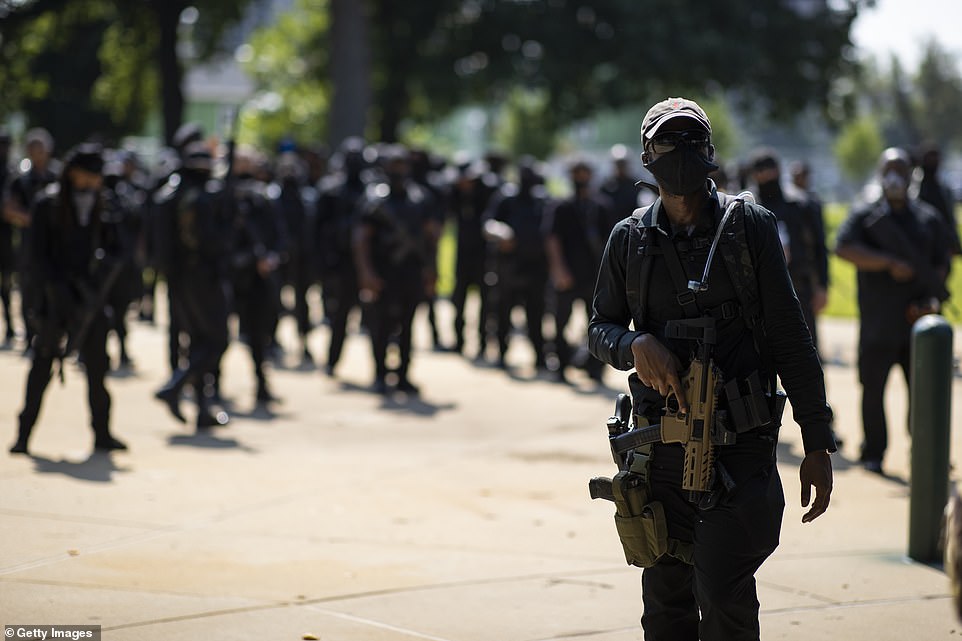 NFAC members are seen above carrying firearms during a march in Louisville, Kentucky, on Saturday 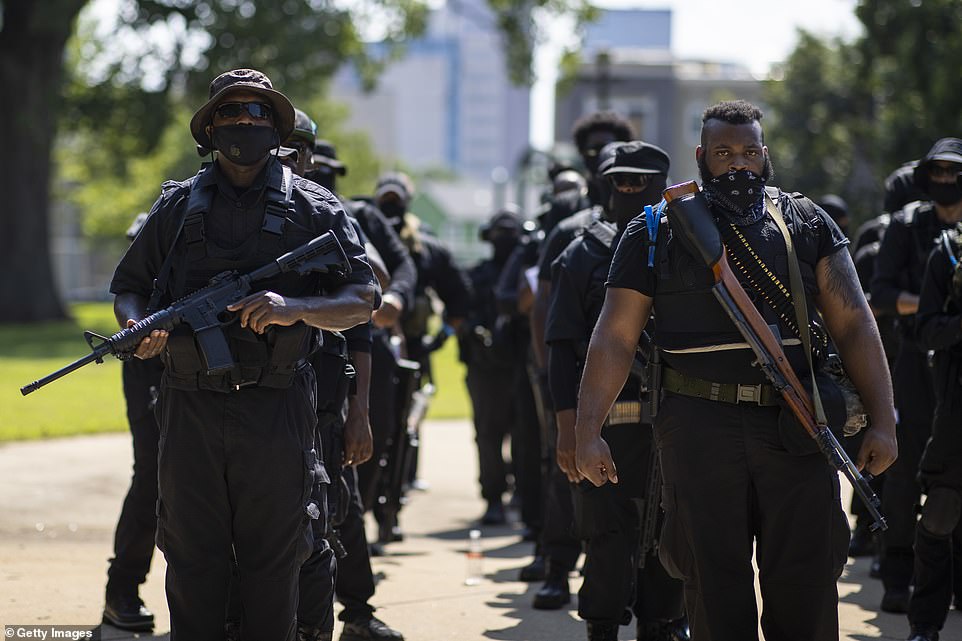 NFAC members are seen lining up in formation just before setting off on a protest march in Louisville, Kentucky, on Saturday

One officer has been fired, but no charges have been filed. Investigations into the shooting are continuing.

Johnson said earlier this week that up to 5,000 members of the NFAC could take part in the demonstration in Louisville.

During a speech to a crowd of supporters on Friday night, Johnson said he had been in dialogue with several senior Kentucky officials, including representatives from Mayor Greg Fischer’s office, Attorney General Daniel Cameron and Senate Majority Leader Mitch McConnell.

Cameron, a Republican and Kentucky’s first African American state attorney general, said that he still has no timeline for when his office will conclude its investigation of the Taylor case.

In recent weeks, protesters have been staging demonstrations outside Cameron’s home demanding felony charges be brought against the three police officers.

‘We’ve chanted, we’ve sung, nothing has changed,’ Johnson said when asked about his organization’s presence at the rally on Saturday.

‘What’s the definition of insanity? Doing something over and over again and expecting different results.’

As of early Saturday afternoon, at least one person was arrested by Louisville police. Officers were reportedly standing in between the two groups who were standing opposite of one another in front of city hall.

On one side were Black Lives Matter protesters and NFAC members while on the other side were Three Percenters.

A woman said to be a supporter of BLM who allegedly tried to walk through the police barricade was taken into custody, according to the Louisville Courier Journal. 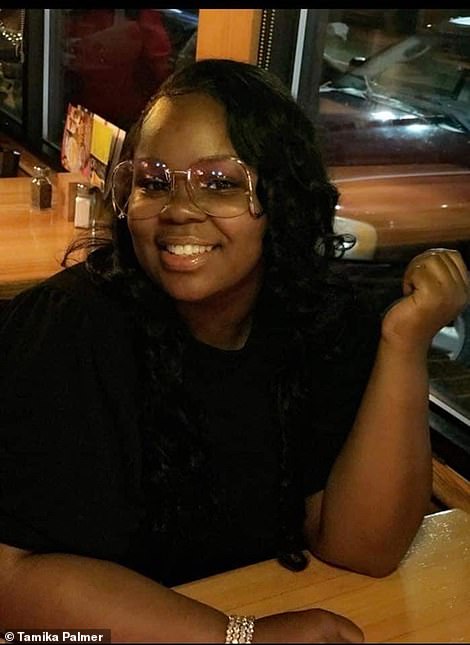 Breonna Taylor, 26, was shot and killed at her home in Louisville, Kentucky on March 13. A coroner says she died from gunshot wounds almost instantly, but her boyfriend says she was coughing and gasping for air for five minutes

At least 40 police officers were seen forming a human barricade between the two groups of demonstrators.

Tara Brandau, a member of the Three Percenters, told the Courier Journal that she heard several members of a group affiliated with the Ku Klux Klan planned to come to the protest.

Brandau said that the Three Percenters did not support the KKK group’s plan.

If the KKK does show up, Louisville police plan to deploy more officers to set up another barricade to keep the peace, according to the Courier Journal.

At least 100 members of NFAC were seen gathering at Baxter Park. From there, they began marching to Jefferson Square Park.

Local black residents interviewed by the Courier Journal said they support the NFAC’s presence at the demonstrations.

The state of Kentucky has some of the nation’s most liberal gun laws in the country. Residents are permitted to openly carry their firearms in public if they are licensed to do so.

The presence of highly armed factions is prompting public officials to warn residents to stay away for fear of possible violence.

‘The potential for violence will be heightened as we will more than likely have a number of highly armed groups representing very different viewpoints as well as other groups all situated within a block of each other,’ Louisville city council member Kevin Kramer, a Republican, said.

‘While efforts are being made to ensure a safe environment to all persons present, I would caution you that the potential for violence will exist.’

Kramer said he was worried that law enforcement agencies did not have all of the necessary tools to ensure that the situation did not spin out of control.

Protests against racism and police brutality were expected to continue in cities like Louisville and other parts of the country this weekend even as President Trump has pledged to expand a federal crackdown by sending in armed Homeland Security officers to help keep the peace.

Trump announced on Wednesday he will send federal agents to Chicago and Albuquerque, New Mexico, to help combat rising crime, expanding the administration’s intervention into local enforcement as he runs for reelection under a ‘law and order’ mantle.

Using the same alarmist language he has employed to describe illegal immigration, Trump painted Democrat-led cities as out of control and lashed out at the ‘radical left,’ which he blamed for rising violence in some cities, even though criminal justice experts say it defies easy explanation.

‘In recent weeks there has been a radical movement to defund, dismantle and dissolve our police department,’ Trump said Wednesday at a White House event, blaming the movement for ‘a shocking explosion of shootings, killings, murders and heinous crimes of violence.’

The decision to dispatch federal agents to American cities is playing out at a hyperpoliticized moment when Trump is grasping for a new reelection strategy after the coronavirus upended the economy, dismantling what his campaign had seen as his ticket to a second term.

With less than four months until Election Day, Trump has been warning that violence will worsen if his Democratic rival Joe Biden is elected in November and Democrats have a chance to make the police reforms they have endorsed after the killing of George Floyd and nationwide protests demanding racial justice.