Residents in a French town had an unexpected visitor last night when a large black panther was spotted prowling along their gutters after it escaped from its owner.

Incredible pictures and footage show the big cat strolling outside the third-storey of a house in Armentieres yesterday.

Firefighters, the police and a veterinarian were called to capture the animal after it managed to escape when its owner went on holiday. 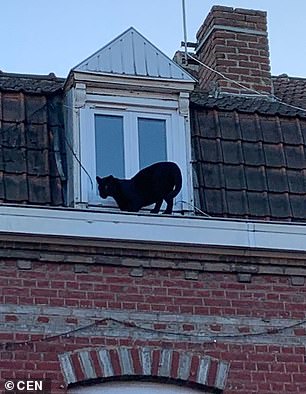 Residents were shocked to discover a black panther, pictured left and right, strolling along the third-storey gutter of a house in Armentieres, northern France, yesterday evening

Witnesses told local media that the black panther ‘would stop to watch a nearby train go by or to stare fixedly at a cat running off down the street.’

According to local media, the panther wandered around the block of six 1930s brick houses for about an hour.

Every now and then it would go into a flat, through an open window, before coming back outside for more fresh air.

Sharing information on Twitter, the Departmental Fire and Rescue Service of the North said they were ‘confronted with a large cat walking on the residential gutters.’

The emergency services were called just before 6.30pm and put up a security perimeter to make sure the panther couldn’t escape.

Shortly after the National Wildlife Conservation Authority were called to try and help catch the cat. 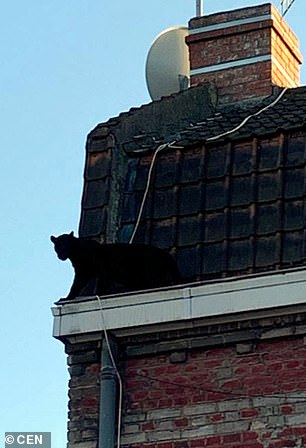 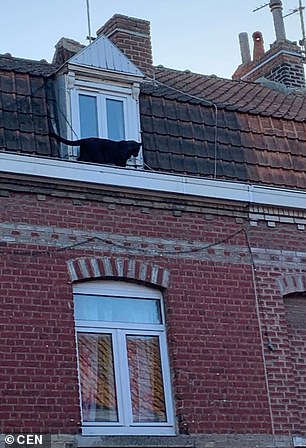 Firefighters managed to trap the animal after it entered an open window and a vet tranquillised the panther, pictured left and right on the gutter, with a hypodermic rifle

Making things a little easier for those on the ground, the animal entered a house and firefighters managed to trap it inside.

A veterinarian then used a hypodermic rifle to send an anesthetic dart into the panther so it could be safely taken by the Animal Protection League.

Pictures from the scene during the standoff with the black panther show the animal wondering along the gutters and looking down at the street.

One journalist at the scene shared a video and wrote: ‘Imagine you are quiet at your house in Armentieres and there a black panther passes by your window.’ 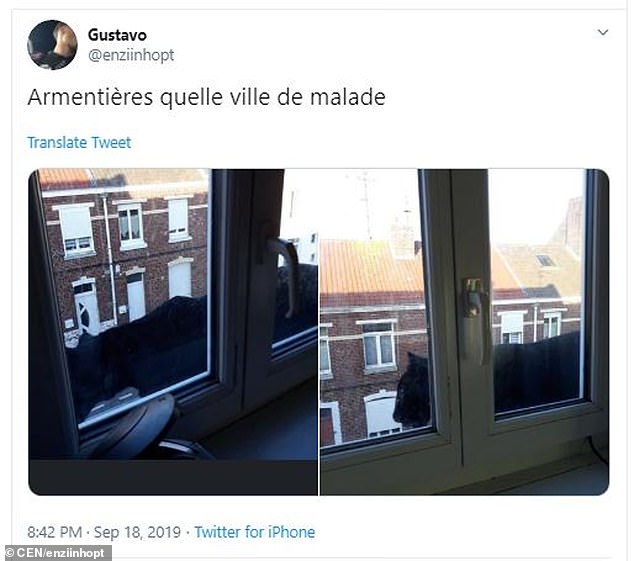 At one point the cat reached to the top of a window, appearing to test out whether a jump onto the roof was possible.

One person posted two pictures of the cat, which is thought to weigh between 25 and 30 kilogrammes (55 and 66 lbs), walking along their gutter – making sure windows were tightly closed.

More than a dozen people took to the streets to watch the rescue operation last night.

A police man at the scene said: ‘In twenty years I have never seen that. A snake, yes. But not a big cat like that.’

Police are expected to question the panther’s owner upon his return. In the meantime, the big cat is reportedly set to be handed over to a zoo.