The black father broke down in tears as he opened up about a white woman calling the cops on him when he yelled at his 13-year-old son while he was playing soccer.

Gerald Jones told ‘WJXX-TV that he ‘absolutely’ deserved an apology when talking about the shocking incident that took place Sunday in Ponte Vedra.

The woman, dubbed ‘Golf cart Gail’ reported she no longer felt safe ‘due to your threatening behavior’ after he told his son to respect the referee’s decision.

Jones – an auctioneer – told the Jacksonville station that although he got let off without arrest, things could have ended much worse for him. 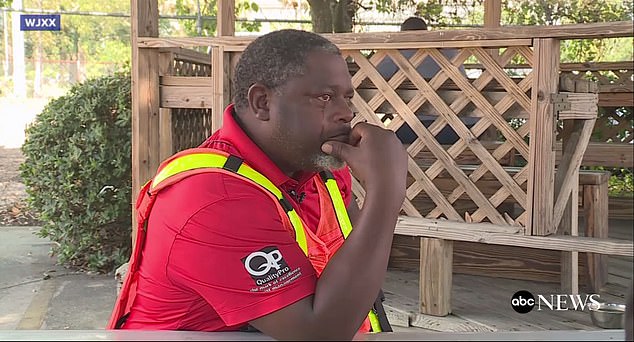 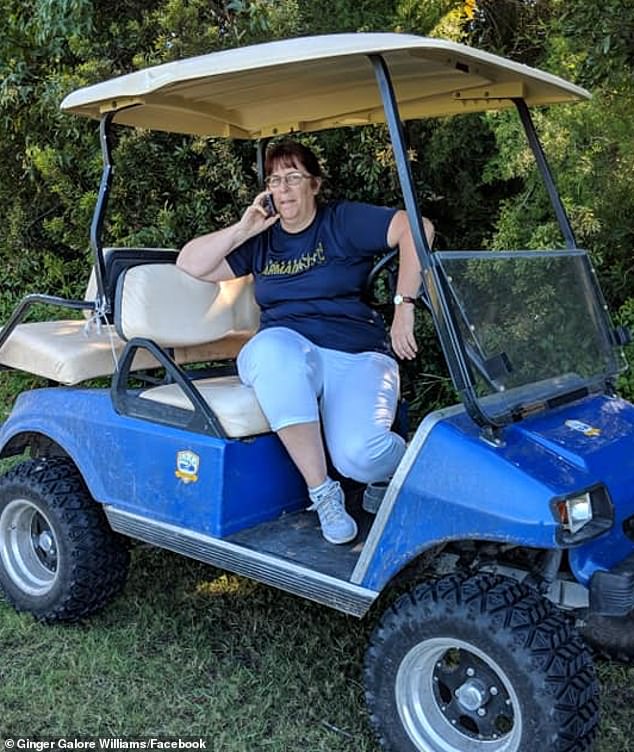 The woman, who has not yet been named, was dubbed ‘Golf cart Gail’ by horrified witnesses. She sat on the sidelines of the game acting as a field marshal and ‘zoomed’ over to the father when she heard him yelling at his son

‘Anything could have escalated – me going to jail, my kid seeing me like that,’ Jones said during an interview Wednesday. ‘I’m working hard every day. Do everything right. Love everybody.’

The recorded incident was the latest in a string of racially-charged incidents across America in which a white person is filmed calling law enforcement on a black or Hispanic person for no good reason.

Other recent incidents include a black man being stopped from entering his own apartment block by a white realtor for no reason and a black boy being accused of groping a woman in a store in Brooklyn when in fact his backpack had merely brushed past her.

Now the doting parent has to explain the risks posed to his 13-year-old son who is biracial. 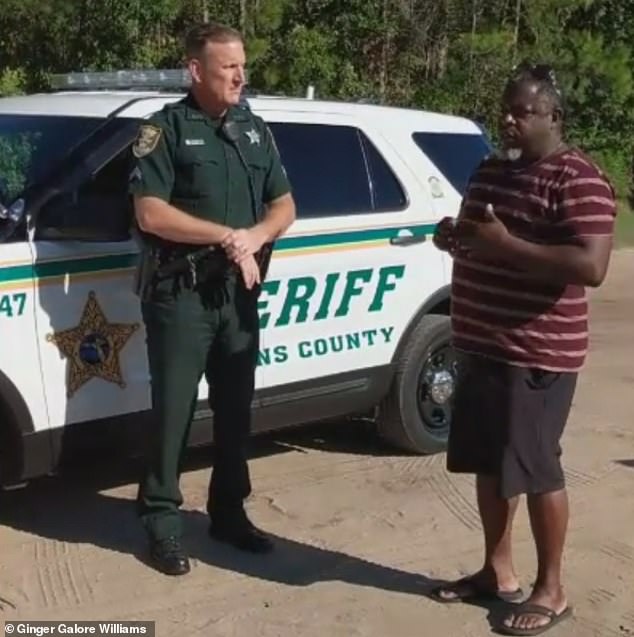 When two sheriff’s deputies arrived, the father explained that he had merely been talking to his son and encouraging him on the field. He said he told the woman he did not want a problem and he agreed to leave but she followed him and called the police

The woman, who has not yet been named, was dubbed ‘golf cart Gail’ by horrified witnesses.

She was filmed sitting in her cart on the sidelines of the game at Davis Park in St Johns County, watching as the man shouted out to tell his young son that the ref was ‘right’.

The field marshal, mistook his comments for him harassing the referee and confronted him.

When he explained that he was only talking to his child and no one else, the woman, it is claimed, carried on the altercation.

Despite the man telling her he would leave to avoid an ‘issue’, she, according to witnesses, followed him away from the soccer field and called police, after he told her that their conversation was ‘done’.

Ginger Williams, a Black Lives Matter advocate, filmed the aftermath once police had shown up. 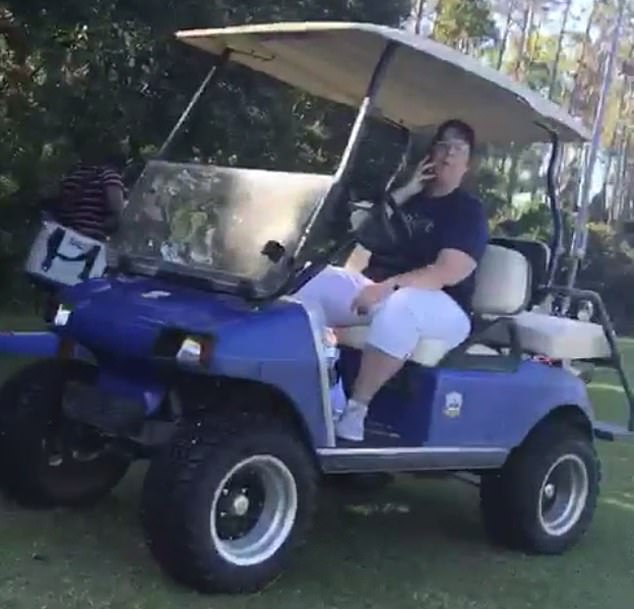 In another video, ‘Gail’ tells the mother filming that she too must leave the site as the father, named only as Gerald, prepares to leave

She told ABC News she was told by the woman to leave, claiming she said: ‘Ma’am, you can leave too. Videotape yourself as you’re walking out.’

Both questioned why the field marshal called the cops on the black father and not a white man who had been asked to leave earlier in the game for improper behavior.

In the video, ‘golf cart Gail’ admitted to police that the father was, it turned out, speaking to his son and not the referee but she said he became ‘nasty’.

‘And I went on to just kind of explain, you know, ‘I’m just trying to make sure everything’s’… and then he starts, [he] gets nasty with me.

‘You know, “I’m not talking to you anymore. I’m done with this,”‘ she told the officer. 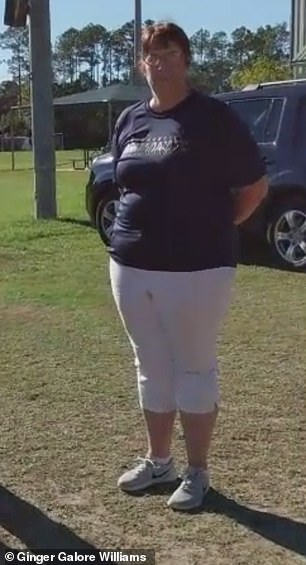 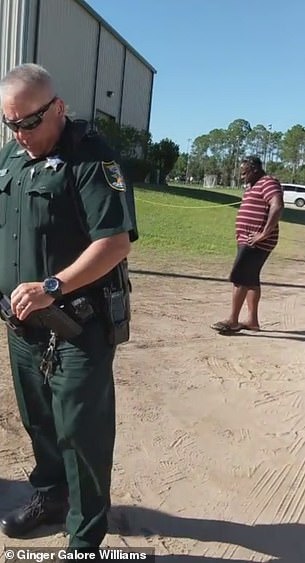 The woman, who has not been identified, told officers she became worried when he ‘got nasty’ and told her he was finished with their conversation. The man was not arrested

Williams, the woman who filmed their interaction, asked law enforcement to promise that the man was ‘safe’.

‘From this entire situation from everything… I don’t understand why this woman felt the need to call the police on this man.

‘I’ve never in my life seen anything like this happen to anybody. The gentleman before him, absolutely, rude, screaming. This man said, ‘Hey, I’m only talking to my son.’

‘I felt that this woman sat there on her cart and was a very intimidating presence. It was a non-issue and then she came zooming around.

‘She’s sitting there just waiting to create tension. To then follow this man out when he said, ‘Hey, I’m going to leave. I don’t want an issue.’

‘Why [did] she feel it was necessary, when he voluntarily left on his own accord, to call the cops?’

The woman stood with her arms behind her back as Williams questioned her.

Her video ends with the man pacing around the parking lot while the woman stood in between the two police officers who had been called.

The police let the man go without charge after telling him they had no reason to arrest him. 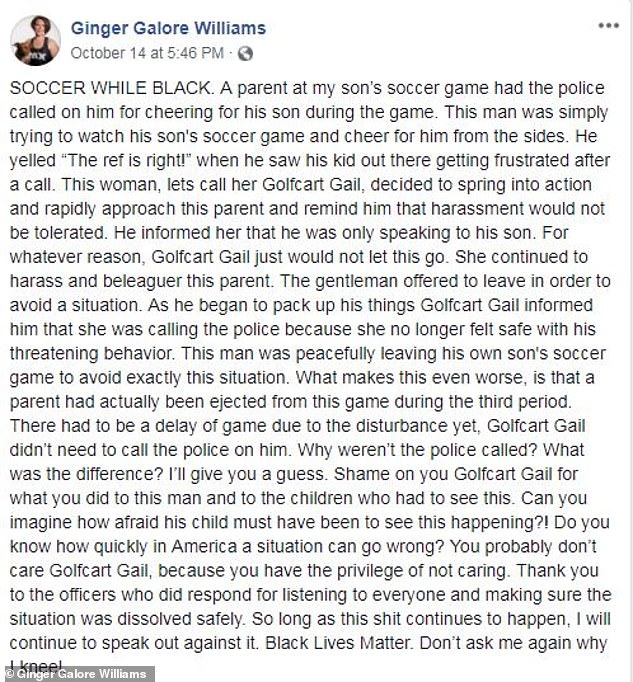 Gary Easom, president of the Ponte Vedra Athletic Association, said the field marshal was trying to control parents’ behavior and that it was not a racial incident.

‘This happens more times than I would like,’ he said of parents behaving badly on the sidelines.

A statement continued: ‘The Ponte Vedra Palm Valley Athletic Association puts the welfare of children above all else. The PVAA Code of Conduct protects children in a number of ways, including the prohibition of inappropriate conduct such as berating referees, coaches or athletes, and “coaching” children from the sidelines.

‘Unfortunately, parents sometimes violate the conduct code while watching games. When such violations occur, our staff addresses the violator or violators and ask that they behave appropriately. If, after warnings, the violators continue to behave badly, staff is left with no choice but to call law enforcement, consistent with county policy. That is an extreme circumstance which seldom occurs, but that is exactly what happened in this situation.’

Easom added that police were not called to the scene simply because of Jones actions that day but because of other incidents that had taken place previously.

The organization stood by the field marshal’s choice to call the emergency services to the sports game and said the story had been ‘sensationalized’.

‘The authorities were not called solely for this particular incident but as a result of a culmination of several immediate prior incidents. The field marshal acted appropriately and without malice to ensure the welfare of the children she is charged with protecting,’ Easom continued.

‘Unfortunately, an incomplete narrative of this incident was posted and sensationalized, creating a wholly inaccurate and irresponsible version with little relation to what actually happened that day. It was an unfortunate incident and I am sorry it happened, but our team acted appropriately to protect the children, consistent with our organizational mission.’