Black woman rants at Jewish man on a NYC subway

A black woman went on an angry rant at a Jewish man in the middle of a crowded morning subway as shocked commuters looked on.

The pair were riding a train in New York City when the Jewish man call her a racist in what appeared to be an argument over seats.

The initial disagreement was not caught on camera but it seemed the woman made a comment about Jews when he didn’t stand up for someone else.

He demanded to know what she meant by ‘you guys’ while she shouted ‘because your family went through the holocaust?’ as the video began.

‘You said I was being racist so you tell me what I’m being racist towards. You’re Jewish, and I said if a Jewish family got on her, somebody would have got up – that is not a racist thing, that is a factual statement,’ she yelled.

‘Judaism is not a race, it is a religion.’

The Jewish man’s responses, which were rarely raised above speaking volume, were usually drowned out by her shouting, but he appeared to tell her to calm down.

‘No, I need to come down because I’m schooling your a**. You guys think you’re so f**king smart but guess what, I’m going to teach you a lesson on this f**king train today,’ she responded.

He tried to tell her that they were the same and shouldn’t be racist to each other, saying ‘I’m a person, you are a person’.

She replied: ‘No, we’re different, understand that. You wanna know why? Because your people treat my people different in our community.’

‘No, that’s not true,’ he said, before she accused Jews of refusing to rent to black people. He responded by saying he didn’t own a house.

‘You said that I was racist so I’m addressing your people. You said I was racist because I brought up Judaism, right?’ she said, launching into a long tirade.

‘You wouldn’t have called me a racist if I said a Mexican family came on here, right? I’m not hateful, let me school you, did I say Jews are dirty? Did I say they stink?’ 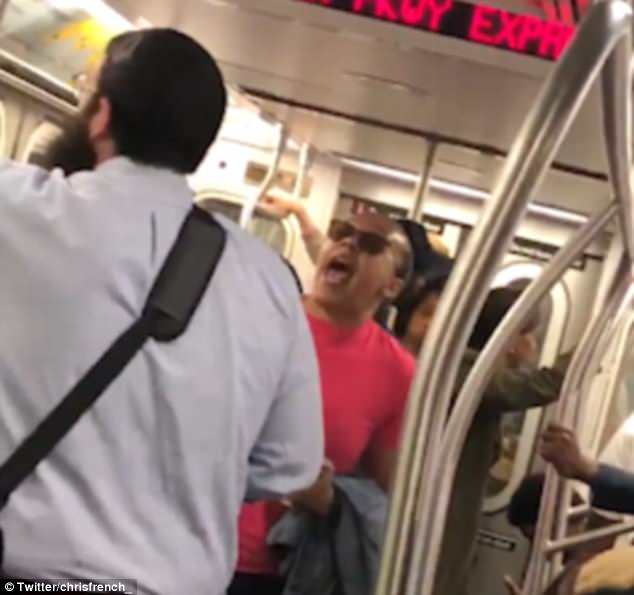 ‘We’re different, understand that. You wanna know why? Because your people treat my people different in our community,’ she yelled

The Jewish man insisted what she said initially was in fact racist, but she declared several times: ‘Judaism is not a race!’

The pair exchanged ‘yes it is’, ‘no it isn’t’ responses before the video ended.

Unlike many other religions, Jews are also considered a race and six million of them were murdered by the Nazis on racial, not religious, grounds.

Those who consider themselves ethnically Jewish may not practice Judaism, and many people of other races are followers of the religion.