A black woman who live streamed the moment a white CVS pharmacist allegedly called the police on her because she ‘didn’t like the tone of her voice has spoken to DailyMail.com about the moments leading up to the ordeal.

Kendriana Washington uploaded a thread of videos to Twitter on Monday, which showed the exchange she shared with the employee at a CVS in Tulsa, Oklahoma.

Washington explained that she has a chronic illness and has received ‘poor customer service’ from the same CVS once before.

Ahead of her recent encounter with employees at the pharmacy, Washington said she called ahead about to ask about her prescription last Friday before heading to pick up the medication on Monday.

Washington, who is currently uninsured as a freelance writer and has to pay out of pocket for her healthcare costs, said while speaking with one of the pharmacy technicians she asked if she could change one of her coupons.

She says the technician told her that it was better for her to wait until her prescription was filled before making changes to the coupon.

Washington told the DailyMail.com that she went to pick up the prescription on Monday. 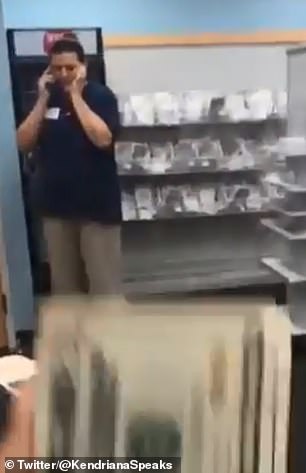 Kendriana Washington who live streamed the moment a white CVS pharmacist (pictured) called the police on her because of the tone of her voice has spoken to DailyMail.com about the ordeal 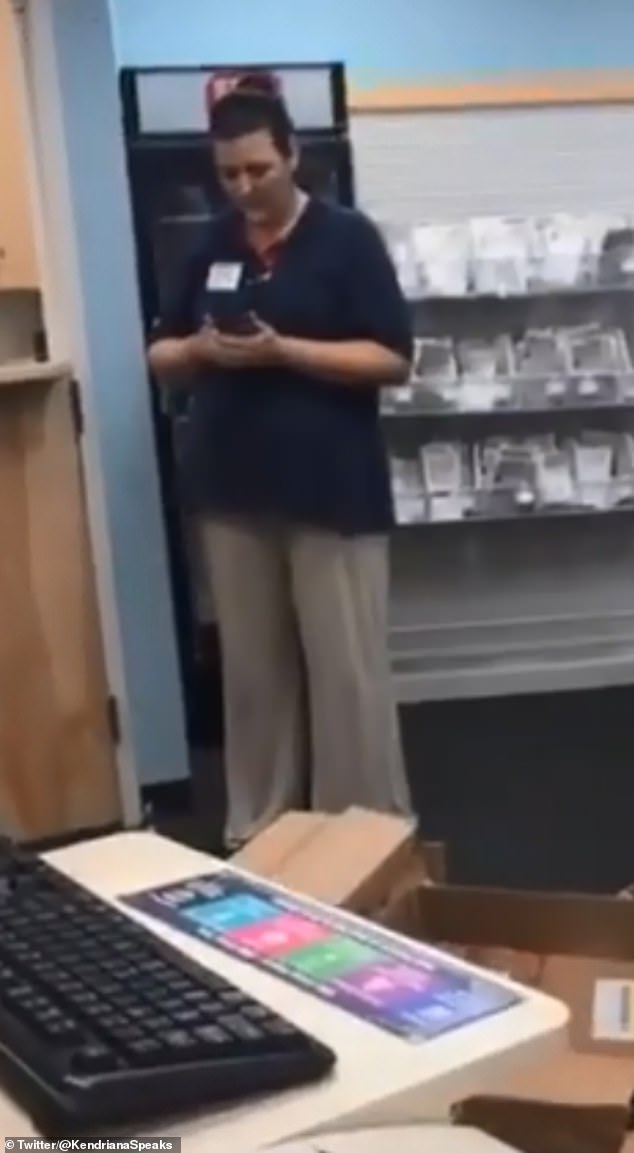 ‘Just stand back so I can come and help you,’ Tanya tells Washington. She then continues by telling her that she ‘forfeited’ her right to be assisted by staff and that police would soon be escorting her from the premises

While in the drive-thru, Washington said she spoke with Debbie, another technician at the CVS, who told her they would have to redo the prescription if she wanted to change the coupon.

She was told to come back in 15 minutes to pick up the prescription.

Washington, who had just left the grocery store before going to CVS, waited in the parking lot and pulled back around to the drive-thru after the 15 minutes was up.

At that point, she spoke to another representative who took her bank card, but the payment wouldn’t process.

That’s when Washington asked the employee to try again because ‘I know the money is on there’, adding that she had just used the card at the grocery store.

Washington said the representative tried a few more times and the payment still wouldn’t go through.

Debbie then came back to help the employee, but the payment still wouldn’t work.

Washington asked Debbie if they could try another register.

But she recalled Debbie saying: ‘No. You don’t have enough money on your account. That’s usually what that means.’

‘And I told her I do have the money,’ Washington said.

Washington said she was upset when she replied: ‘How dare you say that to me?’

But at no time was she ever ‘belligerent’ or ‘screaming’.

She then asked Debbie if they had an ATM inside, parked her car and went inside to get cash.

After getting the amount she needed, Washington said she went up to the counter to check out and recalled telling Debbie: ‘Debbie you said that I didn’t have money in my account. Here’s the cash right here.

‘You are discriminating against me, your comments were racist and I’m filing a complaint against you. Take my money and give me my prescription now.’

At that point, Washington said that Debbie was ‘clearly concerned that I was going to file a complaint’ and called Tanya up to the register.

‘Tanya then came up to me and started trying to discuss the issue with me and making excuses and trying to apologize,’ Washington said. 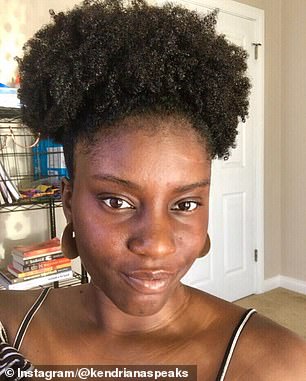 Washington uploaded the thread of videos to Twitter on Monday, documenting the exchange she shared with the employee, referred to only as Tanya

She said it was then that Tanya told her: ‘I don’t like your tone. You need to change your tone.’

Washington then retorted: ‘You can’t tone police me. Just do your job, get my prescription so that I can leave.’

Tanya then threatened to call the police and Washington began recording the incident.

In the videos, Washington, self-described as an ‘Intersectional Radical Pro-Black Feminist, writer and artist’ on her social media accounts, accused Tanya of discriminating against her and ignoring her civil rights.

‘This woman is calling the police on me when I have cash and I’ve asked her several times to process my payment.

‘She’s calling the police because she doesn’t like the tone of my voice. They messed up my prescription three times.’

Washington is then heard accusing Tanya of attempting to play the victim, insisting she’s not going anywhere until the matter is settled cordially.

Tanya can be heard faintly saying on the phone that Washington is ‘refusing to hear her out’.

Tanya then accuses her of ‘yelling at the top of her voice’ in a conversation with a 911 operator, causing Washington to retort that she wasn’t raising her voice but adopting a ‘stern tone’.

As Tanya hangs up the phone from police the dialogue continues to escalate.

‘Just stand back so I can come and help you,’ Tanya tells Washington.

She then continues by telling her that she ‘forfeited’ her right to be assisted by staff and that police would soon be escorting her from the premises.

‘This just blows my mind. After Tanya walked away, Debbie who called Tanya up in the first place then calmly walks toward me and processes my prescription,’ Washington recalled.

‘All of this calling the police like there was a threat, like I did something illegal, like I was being belligerent, using profanity even though I did have the right to be upset…if that was the case she [Debbie] wouldn’t have felt safe to come up to me and process my transaction anyway,’ Washington pointed out.

Washington explained: ‘That let me know that basically she was using the police as a punitive reaction, punishment toward me for requiring them to do their job, for refusing to have a conversation with them that they wanted them to have, for telling Debbie that she was racist which she found offensive and that’s clear afterwards when she continued to talk to me about it and told me that she couldn’t be racist because she has black friends.’ 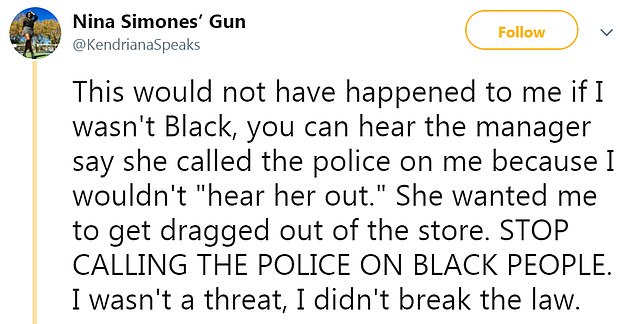 Washington said the altercation was a prime example of racial discrimination, insisting police would’ve never been called if ‘I wasn’t black’ 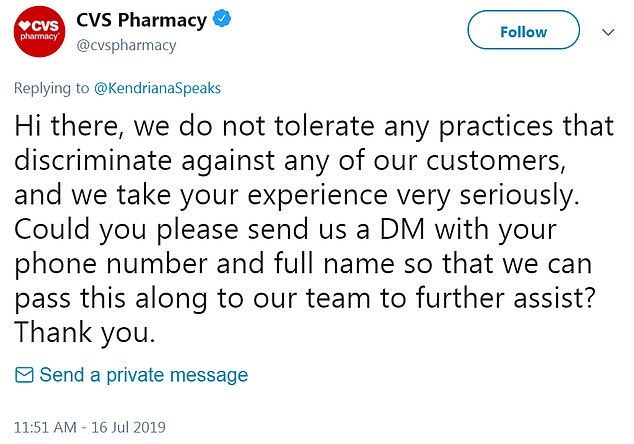 CVS has since replied to the thread of videos on Twitter, issuing an assurance that the company does not tolerate discriminatory practices

On Tuesday, Washington spoke with the district leader, Amanda Dixon.

Washington said the conversation with Dixon was ‘very unfortunate’ and it made it clear to her that CVS ‘wasn’t taking it seriously at that point’.

She said Dixon made it clear to her that ‘she was trying to save Debbie’s job’ by telling her that she has known Debbie for about 20 years.

‘When I was telling her about what Debbie did, she kept trying to make excuses for her and sort of put more of the blame on Tanya. She said explicitly, ‘I’m not happy with what Tanya did. That was obviously a problem.”

Washington said Dixon then let her know that she had spoken to Debbie, who told Dixon a different story.

In the 24 hours between their interaction and when Washington spoke with Dixon, ‘Debbie decided to make up a story to protect herself’.

‘She [Debbie] told Amanda that the only reason she said I didn’t have the money is because she thought that my bank card was an HSA card and she was trying to tell me that I didn’t have any money in my healthcare spending account.’

Washington said she made it clear to Dixon that Debbie knew that her card was not an HSA card, which is a tax-advantaged medical savings account available to taxpayers enrolled in a High Deductible Health Plan (HDHP).

Later reflecting on the exchange online, Washington doubled-down on her belief that she was racially profiled, surmising: ‘This would not have happened to me if I wasn’t Black, you can hear the manager say she called the police on me because I wouldn’t ‘hear her out.’

‘She wanted me to get dragged out of the store. STOP CALLING THE POLICE ON BLACK PEOPLE. I wasn’t a threat, I didn’t break the law,’ she added.

CVS has since replied to the thread of videos on Twitter, issuing an assurance that the company does not tolerate discriminatory practices.

‘We do not tolerate any practices that discriminate against any of our customers, and we take your experience very seriously. Could you please send us a DM with your phone number and full name so that we can pass this along to our team to further assist?’ CVS’ message reads.

CVS has yet to respond to a DailyMail.com request for comment.

Washington never had an encounter with police but she is concerned for others who may not be so lucky.

‘How many times is this going to happen before one of those folks that they call the police on has to endure severe harm,’ she said.

‘It’s unfortunate, and there’s no true way to empathize unless you have experienced something similar or you’ve been in that situation of having the police called on you or being confronted by the police especially when you haven’t done anything to warrant them coming after you,’ Washington said.