The votes are in – Australia’s favourite lolly for 2018 is officially blackberry and cream.

The purple sweet took out the top spot in the biggest voting competition for confectionery company Allen’s.

Over 35,000 Australian’s cast their ballot to name the flavour of the year, which beat both apple and cream and contemporary flavour yuzu and cream.

The new flavour will be released in a Fruits and Cream packet in February, alongside fan favourites strawberries and cream and peaches and cream.

The vote comes a year after sweet-toothed fans cast their votes to have peaches and cream as a standalone lolly.

Nestlé General Manager of Confectionery, Martin Brown, said the search to find the favourite attracted more entries than ever before.

‘What better way to decide on a new Allen’s lolly than with the help of the nation! The final addition to the new Allen’s Fruits & Cream Mix has been chosen by our fans – the never-been-tasted, by the public, Blackberry & Cream is sure to put smiles on faces when it arrives in store next month,’ Mr Brown said. 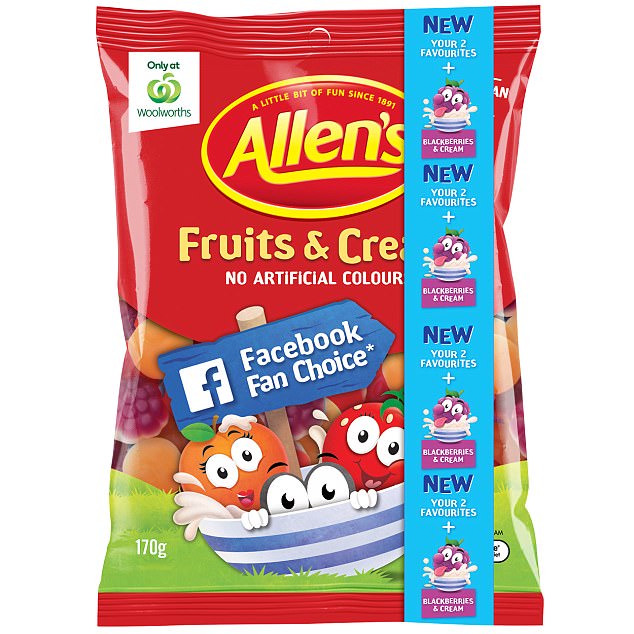 The flavour will launch exclusively at Woolworths from mid-February

‘We can’t wait for our lolly lovers to taste this latest flavour in the Allen’s line-up. And no matter how you like to eat your Fruit & Cream – fruit or cream first, or all in one go – it’s sure to be truly delicious.’

The flavour will launch exclusively at Woolworths from mid-February.