Most of Venezuela plunged into darkness yesterday as a blackout served up more misery for people enduring an economic crisis that has fuelled a potent challenge to President Nicolas Maduro’s rule.

In Caracas, traffic lights went out and the subway system ground to a halt, triggering gridlock in the streets and huge streams of angry people trekking long distances to get home from work.

The socialist government were quick to blame the outage, which hit at 4:50 pm just before nightfall and affected 23 of the country’s 24 states, on what it called ‘sabotage’ of a major hydroelectric dam. 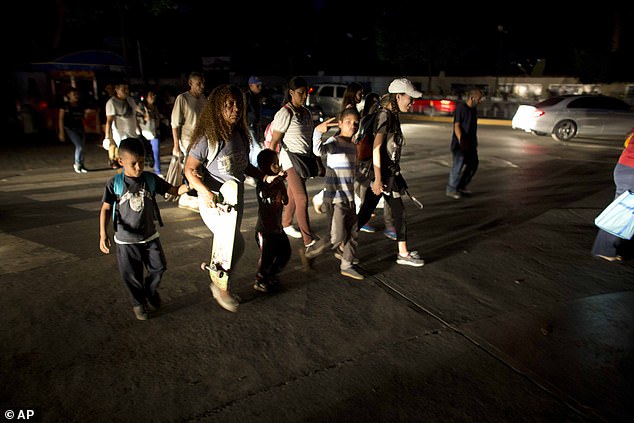 People cross a dark street in Caracas, Venezuela, on March 7 as a power cut leaves most of the country in darkness 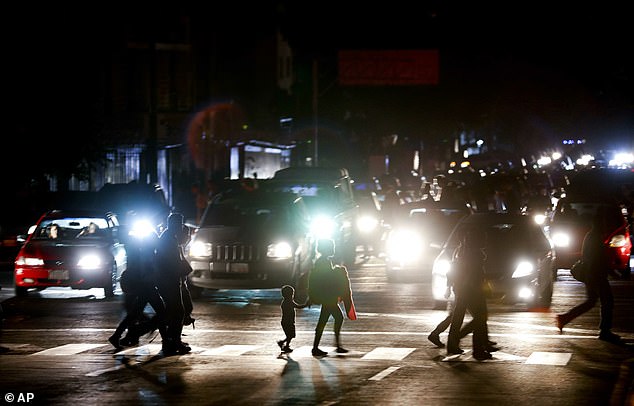 Residents in the city of Caracas cross a darkened street as a power cuts sweeps across the country at 4.50pm 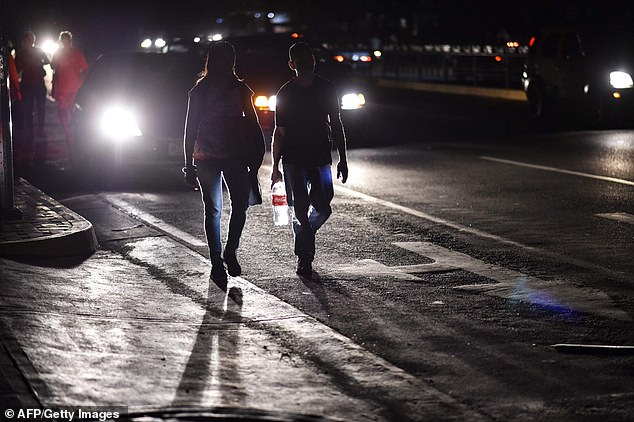 As the capital plunged into darkness commerce was shut down, as most transactions are done with debit or credit cards, and telephone services and access to the internet were also knocked out.

The capital’s international airport was hit, according to social media posts from would-be travelers and a Copa Libertadores football game in the city of Barquisimeto was postponed.

As night set in, the nationwide outage dragged on and some people in Caracas banged pots and pans – a traditional Latin American method of letting off steam.

After seven hours of complete darkness, the lights did come back on in some buildings in eastern Caracas.

The blackout comes after Florida Senator Marco Rubio warned that Venezuela was days away from ‘a period of suffering no nation in our hemisphere has confronted in modern history’ during a hearing on Venezuela’s ongoing crisis in Capital Hill.

During a subcommittee chaired by the US senator, Mr Rubio predicted that the nation would experience ‘the most dramatic shortages they have ever faced’ and blamed President Maduro for the economic crisis. 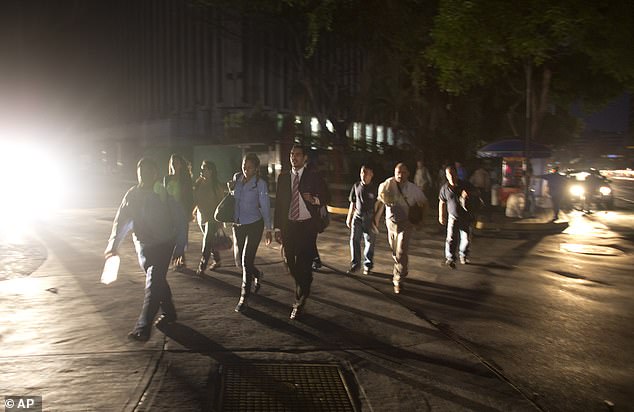 Commuters walk across a street in Caracas as yet another power cut hits the country. In the capital, traffic lights went out and the subway system ground to a halt 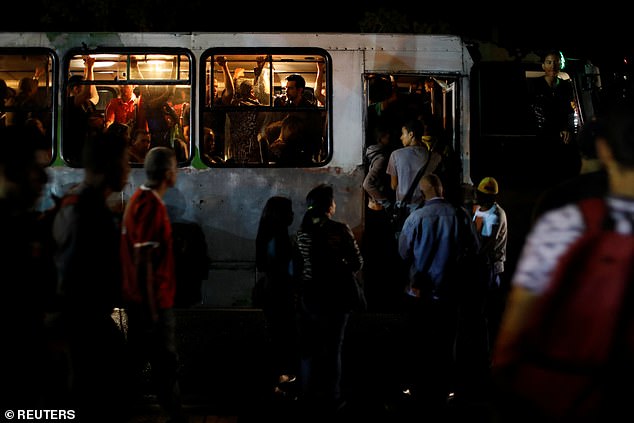 As the capital of Venezuela plunges into darkness, people are seen getting onto a packed bus 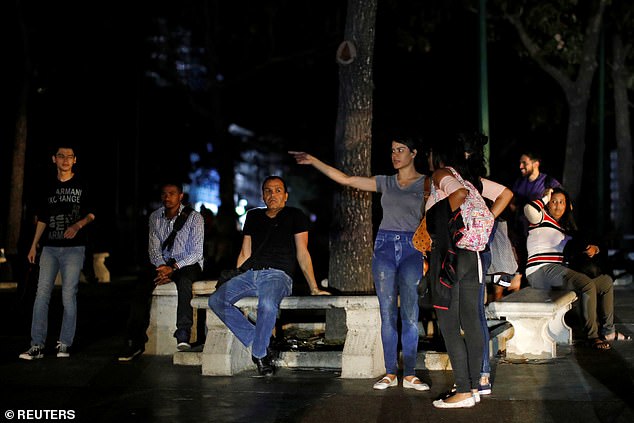 In Caracas, people gather at a park during yet another blackout in the country. During the power cut telephone services and access to the internet were shut down 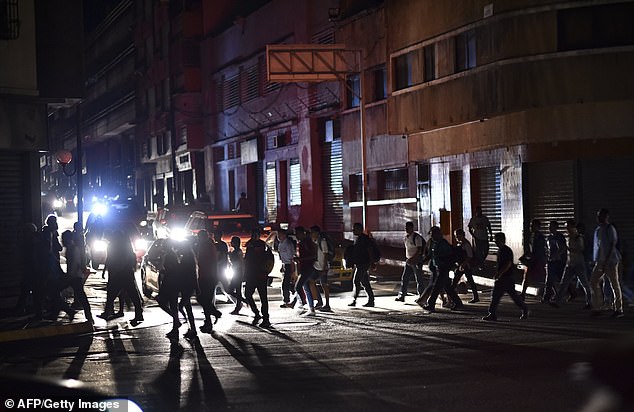 People in the capital of Caracas cross a dark street during a power cut on March 7. At least 18 of Venezuela’s  23 states were reportedly affected

On Twitter, Mr Rubio wrote: ‘Caracas & much of Venezuela remains engulfed in darkness as today’s nationwide power failure is going on its 6th hour.

Venezuelans are wearily accustomed to blackouts. For years they have been common in the west of the oil-rich country, but have eventually spread to Caracas and other areas.

‘We are tired. Exhausted,’ said Estefania Pacheco, a sales executive forced to walk 12 kilometers (seven miles) from her office in eastern Caracas to her home across town.

‘It is so sad every time this happens,’ said the mother of two.

Critics blame the government for failing to invest in the upkeep of the electrical grid however Vice President Delcy Rodriguez alleged that ‘extremist sectors’ had waged ‘a large scale attack.’ She insisted power was back on in some eastern states.

The state power company Corpoelec said there has been sabotage at a big hydroelectric plant called Guri in the Bolivar state. It gave no details. The facility is one of the biggest in Latin America. 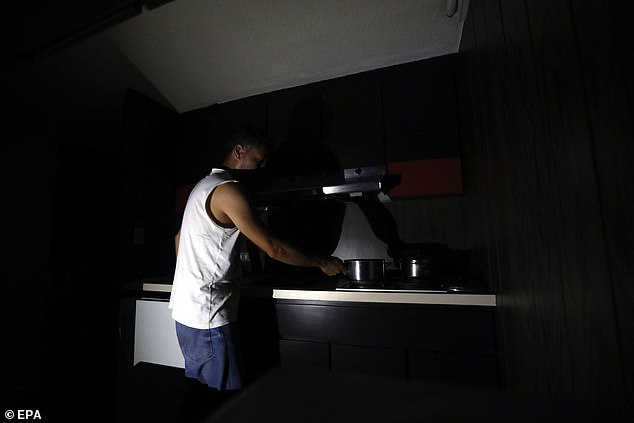 A man in Caracas, Venezuela, tries to cook in the dark during a power cut last night. President Nicolas Maduro’s government blamed the outage on what it called ‘sabotage’ at a big hydroelectric plant called Guri 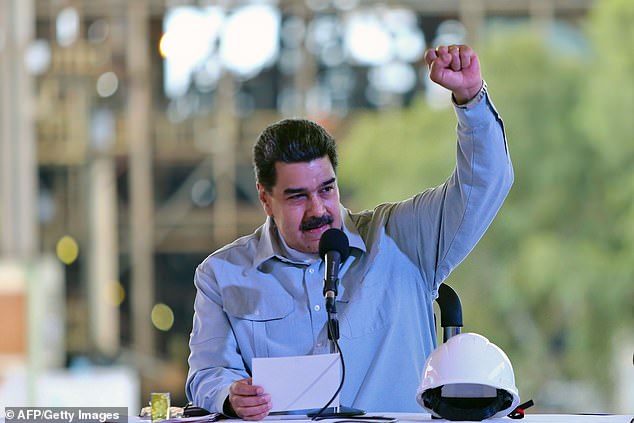 ‘It’s part of the electric war against the state,’ the company said on Twitter.

‘We won’t allow it. We’re working to re-establish the service.’

A year ago, Maduro asked the armed forces to provide security to protect the country’s hydroelectric facilities but power outages continue.

Maduro tweeted that the blackout was part of a war directed by what he called US imperialism. It will fail, he added.

‘Nothing and no one can defeat the people of Bolivar and Chavez,’ Maduro said, referring to the liberation hero Simon Bolivar and Maduro’s predecessor and former boss, the late socialist icon Hugo Chavez.

Maduro is struggling in the face of a challenge by opposition leader Juan Guaido, who has declared himself to be interim president and is now backed by some 50 countries led by the United States.

Guaido says Maduro’s rule is illegitimate, arguing that his re-election win last year was fraudulent, and he wants Maduro to resign from the Miraflores Palace and make way for new elections.

Secretary of State Mike Pompeo said Maduro is wrong to blame the US or any other country for Venezuela’s woes.

‘Power shortages and starvation are the result of the Maduro regime’s incompetence,’ he tweeted.

Guaido tweeted that Venezuela has plenty of hydroelectric plants and more. ‘We have water, oil and gas. But unfortunately we have an usurper in Miraflores.’

The blackout also made it virtually impossible for people to shop.

The highest denomination note, 500 bolivars, is worth about 15 US cents, so most transactions are done electronically. Inflation will hit 10 million percent this year, the IMF estimates.

Adriana Bellorin, a lawyer who went out to buy food Thursday evening, said it was futile. ‘Without electricity I cannot buy anything,’ she told AFP.