Blake Lively has worn an impressive number of suits during her current promo tour — and didn’t hesitate to clap back when an Instagram user appeared to take a hit at her new style.

The actress, 31, has worn suits almost exclusively as of late to promote A Simple Favor, a thriller in which she plays a glamorous high-powered business woman who dresses in elegant suits.

Suit up: Blake Lively has worn an impressive number of suits during her current promo tour — and didn’t hesitate to clap back when an Instagram user appeared to take a hit at her style

‘No double standards’: Blake spotted the post and didn’t seem to appreciate what looked like a dig at her new wardrobe staple — and said as much in a comment

Catherine Kallon, the blogger behind the account, shared two photos of Blake in a pink suit earlier this week.

Blake wore the pale pink three-piece Ralph Lauren suit with a pale shimmery gray tie for the UK premiere of A Simple Favor on Monday.

‘It’s suit number 1,356 for Blake Lively’s promotion of A Simple Favor,’ Catherine wrote in her caption next to two shots of Blake posing in the chic outfit.

Blake spotted the post and didn’t seem to appreciate what looked like a dig at her new wardrobe staple — and told Catherine as much in a comment.

‘Would you note a man wearing lots of suits during a promo tour?’ Blake wrote. ‘So why can’t a woman? Just sayinnnn. No double standards ladies.’

Style: Blake wore the pink Ralph Lauren suit on Monday in London (left) and a dark blue model on Tuesday in Paris (right) 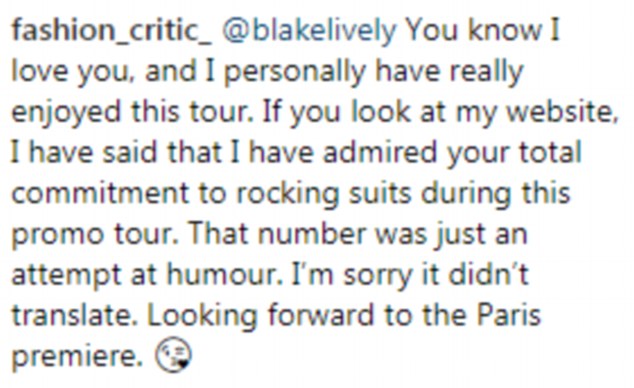 Conversation: Catherine Kallon, the blogger behind the account, responded to Blake, telling the actress she loves her and that she has, in fact, admired her commitment to her new style 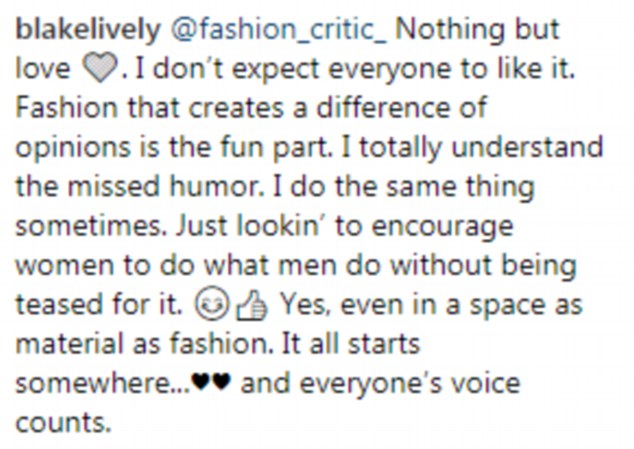 All good: Blake, in turn, shared a gracious response, sending the blogger ‘nothing but love’

Catherine responded to Blake, telling the actress she loves her and that she has, in fact, admired her commitment to her new style.

‘You know I love you, and I personally have really enjoyed this tour,’ Catherine wrote. ‘If you look at my website, I have said that I have admired your total commitment to rocking suits during this promo tour.

‘That number was just an attempt at humor. I’m sorry it didn’t translate. Looking forward to the Paris premiere.’

Blake, in turn, shared a gracious response with the blogger, sending her ‘nothing but love’.

‘I don’t expect everyone to like it,’ Blake added of her wardrobe. ‘Fashion that creates a difference of opinions is the fun part. I totally understand the missed humor. I do the same thing sometimes.

‘Just lookin’ to encourage women to do what men do without being teased for it. Yes, even in a space as material as fashion. It all starts somewhere… and everyone’s voice counts.’

Catherine eventually shared a screenshot of the exchange on her Instagram grid, writing in the caption: ‘The queen has spoken.’

Blake has been getting in character — or at least, into her character’s wardrobe — for months now, almost exclusively wearing suits to draw closer parallels between her and her on-screen alter ego. 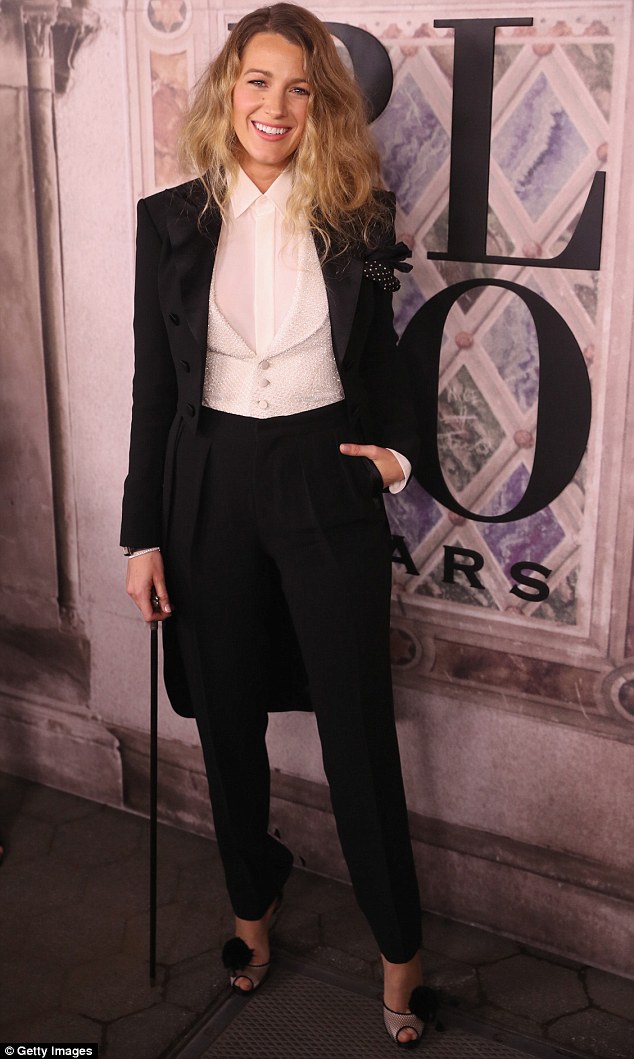 On a roll! Since April, Blake has worn at least 19 different suits, including this Ralph Lauren tux on September 7 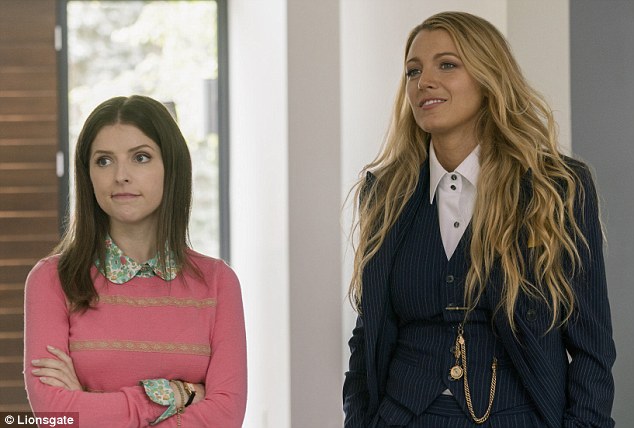 Thriller: Blake stars alongside Anna Kendrick in the film, which sees her wearing a lot of sexy, intimidating suits — the opposite of Anna’s character, who wears girly dresses

Director Paul Feig — who is also behind Bridesmaids, The Heat, and Freaks and Geeks — said the idea for the fashion crossover was all Blake’s.

‘We invented the look when we were putting the movie together, back in one of our first meetings with Renée Kalfus our wardrobe designer,’ he told Cosmopolitan.com.

‘As we were finishing up, putting everything together, I had seen a couple of pictures of her in suits, then she contacted me and she said, “You know what, I’m just gonna keep going with the suits to help promote the movie.”‘

So far, she’s sported at least 19 different suits for events and appearances.

Feig has been a fan of her fashion picks, too, adding: ‘Each one was more spectacular than the next!’

Blake is famously her own stylist and doesn’t work with a team to pick her outfits, so sticking to the theme has likely been a fun challenge for the star.

She kicked things off back on April 26, wearing a custom Sonia Rykiel navy blazer dress to a CinemaCon presentation of A Simple Favor. 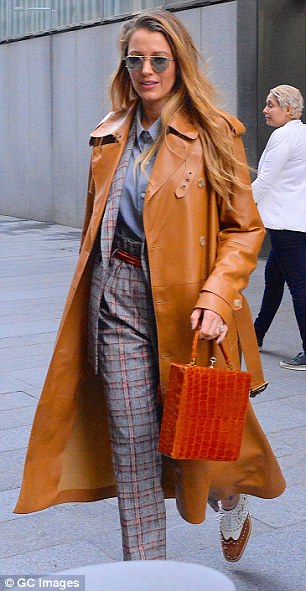 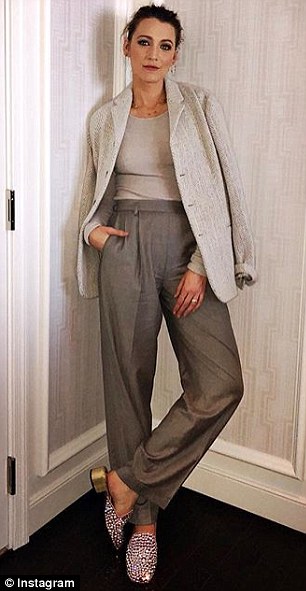 Firm favorite: Brunello Cucinelli was one of her go-to designers for suits (pictured left on September 11), while she also donned designers such as Ralph Lauren (pictured right in April)

In May, she picked a Ralph Lauren suit for another movie event, and was onto a velvet Brunello Cucinelli ensemble while out in New York in August.

Also in August, she wore a neon green Versace look, which was actually pulled from the designer’s menswear collection, and picked a Bottega Veneta short suit later that same day.

There’s also been a plaid Roland Mouret suit, a pinstripe jumpsuit and blazer by Zimmermann, and a white tuxedo jacket and flowing pants by Ralph & Russo.

‘I thought that like, I don’t understand why when a woman wears a suit it has to be like unbuttoned to here or no shirt, or a necklace or whatever, that’s also great, but I also think why can’t we also?

‘Why can’t it be just as sexy when we’re wearing a tight bowtie and pocket square and floret and watches and rings? I think that if sexuality comes out of that and you’re that covered it’s even more you know powerful.’