Blaming mental health problems for mass shooting in Uvalde is ‘intentionally disingenuous’ and ‘insulting’ to people suffering from the condition, expert claims

Blaming mental health problems for mass shootings is ‘intentionally disingenuous’ and ‘insulting’ to people suffering from the conditions, an expert has claimed.

Dr Joel Dvoskin, a clinical psychologist at the Washington D.C.-based American Psychological Association, made the allegations after the Texas shooting.

Instead of pointing the finger at mental health, the gun control expert said politicians should consider access to guns, stalled firearm reforms and stress events as the main factors.

His criticism comes as gun violence grips America on Memorial Day weekend following the massacre of 19 elementary school students and two teachers in Texas by an 18-year-old man.

At least 26 people have died and dozens more have been left injured following shootings in Philadelphia, Maryland and Chicago. 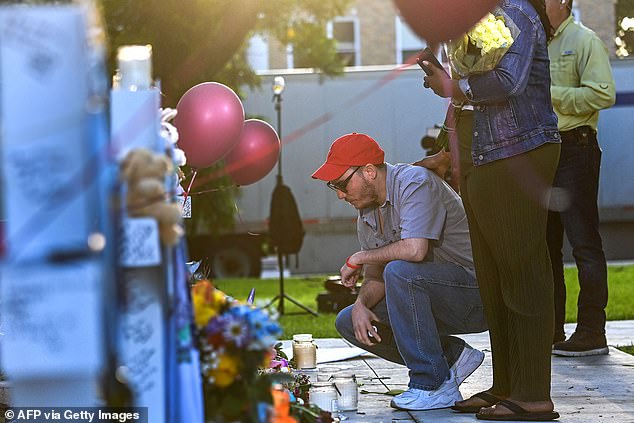 Blaming mental health problems for mass shootings is ‘intentionally disingenuous’ and ‘insulting’ to people suffering from the conditions, an expert has claimed. (Above) A man mourns at a makeshift memorial for the Robb Elementary School shooting victims outside the Uvalde County Courthouse in Texas on May 27, 2022

Asked about the shooting in Texas, Dvoskin told ABC News: ‘The notion of blaming this on the mentally ill is an intentionally disingenuous scapegoating of people who have enough problems already.

‘They don’t need to be insulted by politicians who were looking for a way to avoid a more complicated discussion.’

He also claimed: ‘Very few of these mass shooters have had a diagnosed mental disorder of any kind.

‘That doesn’t mean that they were doing fine. I think the better rhetoric to use [instead of] mentally ill is people who are in crisis.

‘Anybody who’s in a crisis of despair or rage… that doesn’t mean they’re going to shoot anybody but they ought to get help.’

Official statistics from 2018 suggest around 25 percent of shooters in 2000 to 2013 had a diagnosed mental health problem.

However, owing to difficulties accessing healthcare it is likely that many cases are not spotted by mental health professionals before the mass shooting.

The gunman in the Texas shooting had no known criminal history or diagnosed mental health issues. But his mother’s boyfriend has described the teenager as a ‘loner’ who would stay in his room hitting a punchbag, who refused to allow anyone into the house. 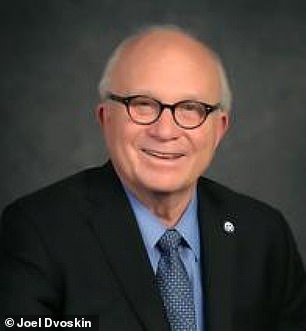 Dr Joel Dvoskin, a clinical psychologist at the Washington D.C.-based American Psychological Association, made the allegations earlier this week

Republican Governor of Texas Greg Abbott said on Tuesday that a ‘mental health challenge’ had played a role in the massacre.

The mayor of Uvalde town — where the shooting took place — Don McLaughlin has also asserted that more mental health resources could have prevented the tragedy.

President Biden kicked off the gun control debate in a speech delivered from the White House late Tuesday, just hours after the shooting, saying it is time to ‘turn pain into action’ and asking voters: ‘When in God’s name are we going to stand up to the gun lobby?’

Texas senator Ted Cruz has been at the forefront of the pushback.  Cruz said that ‘targeting the fugitives and the felons and the bad guys’ rather than the Constitutional right to bear arms is the key to reducing violence.