Now THAT’S a wrap! Swiss glacier is shrouded in UV-resistant blankets to stop it melting in the summer heat

Residents who live near an endangered glacier have been covering it with a huge thermal blanket to protect it from the summer heat.

The 12,000ft high Swiss glacier is meting so quickly over the past 150 years that a massive tarpaulin has to be dragged over the top of it to halt its retreat.

Every spring since 2009, locals who live near the Rhone Glacier trek up the southern part of the Swiss Alps to cover it in white blankets.

These huge sheets covering around five acres of the retreating glacier are left on from spring until autumn, when the ice field is most vulnerable. 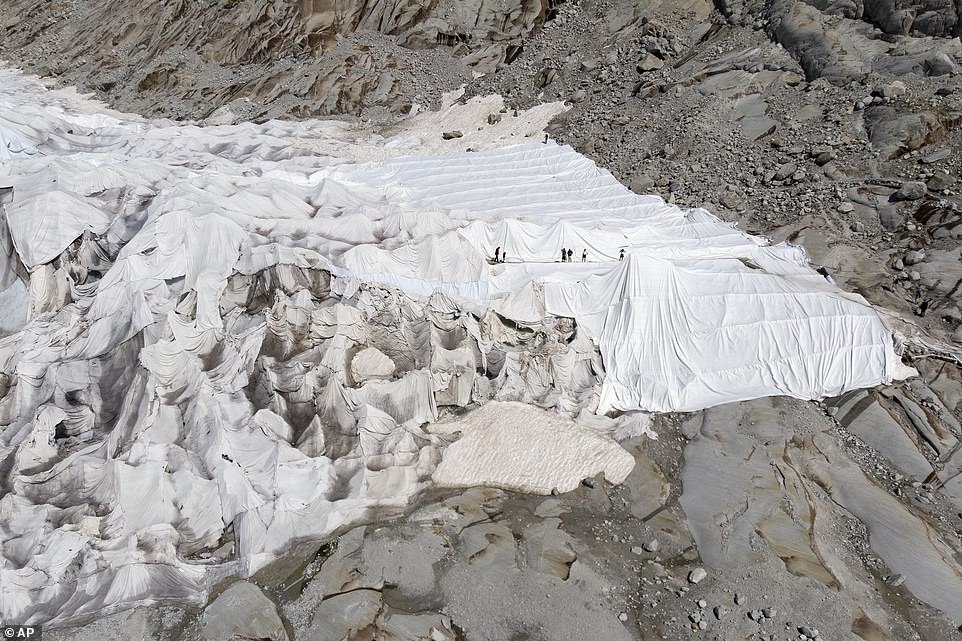 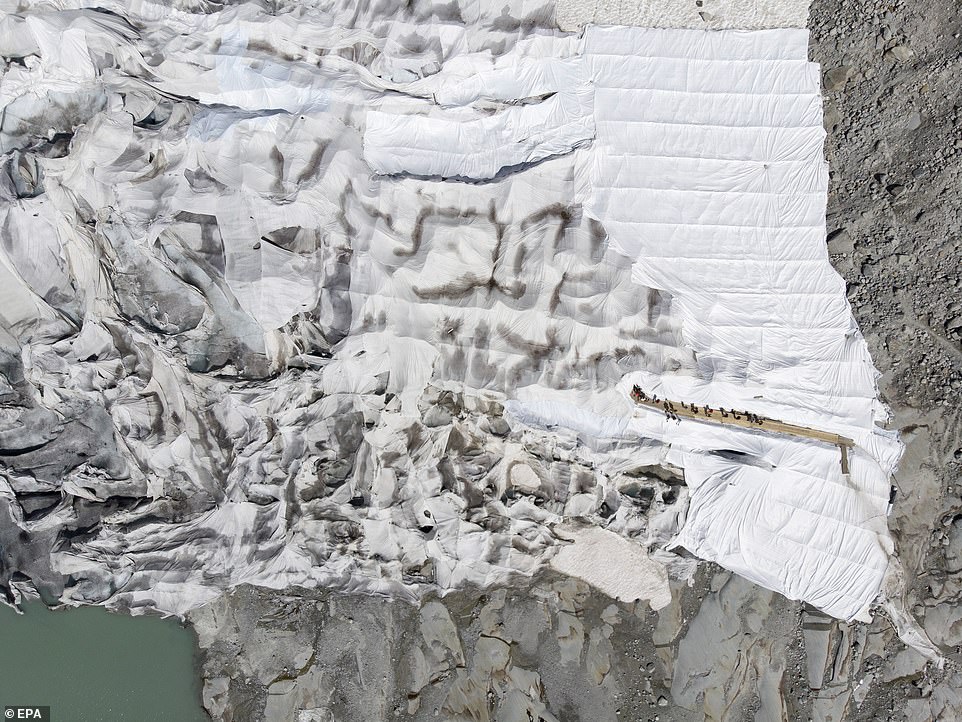 One part of the glacier is protected by special white blankets to prevent it from melting. People could be seen walking along a small section of it as it was being pulled over the landmark

This prevents some of the snow and ice from thawing in the summer sun that has already wreaked damage to the Rhone and other glaciers in the area.

Special white blankets were placed at the glacial lake above Gletsch near the Furkapass on Wednesday to prevent it from melting due to climate change.

The UV-resistant blankets are stuffed with a heavy-duty fleece material, which insulates the ice and reflects back sunlight.

The large sheets of material mainly cover the area closest to the ice cave – a popular tourist attraction at 7,500ft above sea level.

Over the last 10 years the glacier has lost an average of 33ft of thickness with the melting water forming a lake that has been growing in size in the past decade. 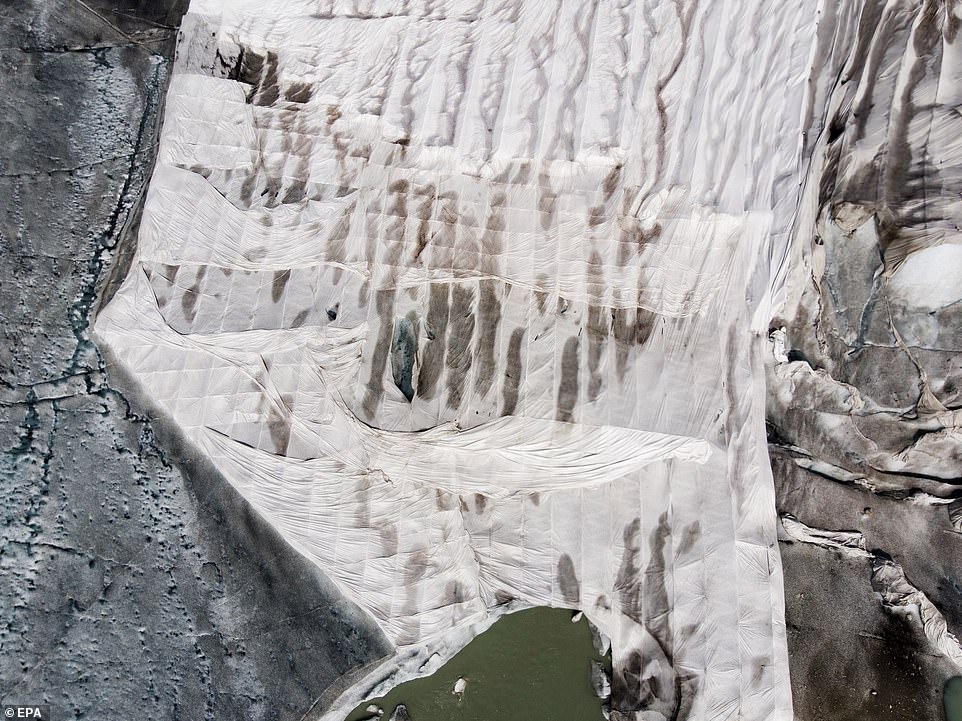 The UV-resistant blankets are stuffed with a heavy-duty fleece material, which insulates the ice and reflects back sunlight 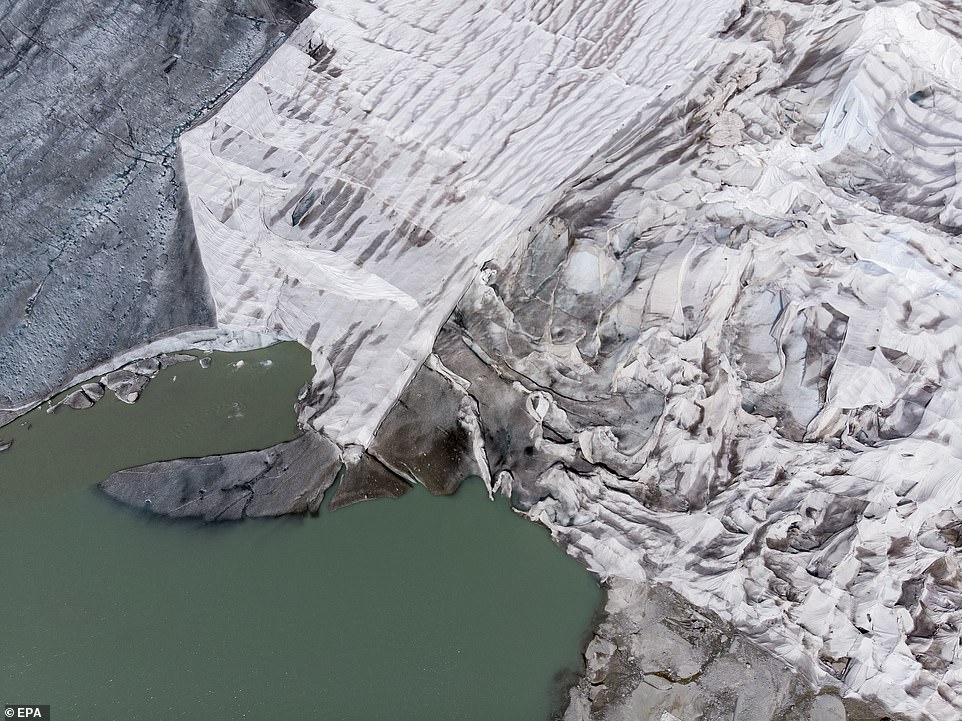 Scientists say the process of covering the glacier can reduce the rate at which the ice recedes by between 50 and 70 per cent.

But the operation to get the covering in place is not cheap and takes several hours to haul and spread the tarpaulins.

Thousands of pounds are spent on the process that involves a lot of manpower and is mainly funded by the residents who neighbour the troubled landmark.

The local economy is at risk of losing income from glacier tourists who have flocked to the area since 1870 to walk through the long and winding ice grotto with ‘glistening blue walls and a leaky ceiling’.

Parts of the Gurschengletscher glacier in in Andermatt, Switzerland, is also blanketed with tarps near the peak of Mount Gemsstock, standing at 2,961 meters high at its peak.