A blast of water could shrink an enlarged prostate as effectively as surgery, but with fewer side-effects, a new trial suggests.

The probe-like device, which fires a high-speed jet of salt water at the gland to remove excess tissue, works in minutes and has a four-fold lower risk of sexual complications, compared with surgery, say researchers from Frimley Park Hospital in Surrey and other centres.

Benign prostatic hyperplasia (BPH) is a non-cancerous enlargement of the prostate, a walnut-sized gland below the bladder. Its main job is to make fluid for semen.

The cause of the condition — which affects around half of men in their 50s and up to 90 per cent of those over 80 — is not fully understood, though one theory is that, as men age, their testosterone levels drop, triggering the growth of prostate cells.

Progress: The AquaBeam water jet system fires a saline solution at the prostate from a tube-like device that is fed through the urethra and into the bladder, guided by ultrasound images

Not all affected men will have symptoms. However, an enlarged prostate can compress the urethra, the tube that carries urine from the body, causing frequent trips to the loo, a weak urine stream and a feeling of not fully emptying the bladder.

Mild symptoms are usually treated with medicines such as alpha blockers, which relax the muscle of the prostate and bladder neck, allowing urine to flow more easily.

If medication doesn’t work, then surgery is an option — transurethral resection of the prostate (TURP), which removes excess tissue, is considered the gold standard, but is invasive and can lead to erectile dysfunction or incontinence.

To try to avoid these side-effects, techniques less likely to damage healthy tissue are being investigated. The AquaBeam water jet system fires a saline solution at the prostate from a tube-like device that is fed through the urethra and into the bladder, guided by ultrasound images.

Destroyed tissue is suctioned out and removed via holes in the device. The procedure is usually carried out without a general or spinal anaesthetic.

A trial on around 200 patients comparing the procedure with TURP, reported in the journal Advances In Therapy, found it was highly effective. 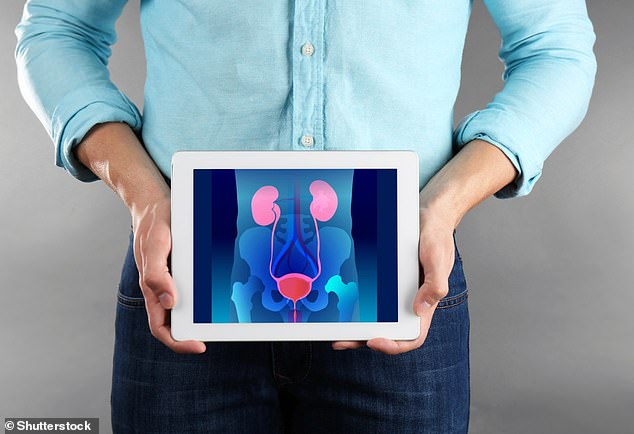 Did you know? Benign prostatic hyperplasia (BPH) is a non-cancerous enlargement of the prostate, a walnut-sized gland below the bladder

Two years after the treatment, nine out of ten men in both groups had a significant improvement in their symptoms.

‘But minimally invasive procedures such as this can often be done as a day case and even under local anaesthetic.’

It means prostate cancer is behind only lung and bowel in terms of how many people it kills in Britain. In the US, the disease kills 26,000 each year.

Despite this, it receives less than half the research funding of breast cancer – while treatments for the disease are trailing at least a decade behind.