Blast off in a ‘shuttle’ and touch moon rock in Florida

The first time I saw the Space Shuttle taking off, on film, I was captivated. I was only four, but that black-and-white machine roaring into the sky on a column of smoke got me hooked on science, exploration and adventure.

Its retirement in 2011, after 30 years of service, was the end of an era. All 135 Space Shuttle flights lifted off from Kennedy Space Center, which is why it is home to Atlantis, one of three remaining Space Shuttle orbiters — the reusable plane part of the Shuttle.

Walking into the exhibition, under the full-scale replica of its launch rockets, I am giddy with excitement. My childhood dream of seeing a Space Shuttle is about to come true.

First, there’s a film about the Shuttle programme, before Atlantis is revealed.

‘The Shuttle was a very capable machine,’ says astronaut Ken Cameron, who piloted Atlantis twice. ‘It’s displayed here exactly as I remember flying it. It’s so close that you can almost touch it.’

I tried my hand at the skills needed, from lift-off in the Shuttle Launch Experience, to landing the Shuttle in a spaceflight simulator. The whole thing is as entertaining as it is informative, and adults will love it just as much as children.

My sister (no space geek) is impressed by the science and engineering that made it all possible.

In the brand-new Heroes and Legends building, the men and women of the astronaut programme are celebrated.

Through The Eyes Of A Hero, an immersive ‘4D’ film about the early missions, carries me into space alongside those early pioneers.

There’s memorabilia from astronauts’ childhoods and video testimonials about how they developed such qualities. 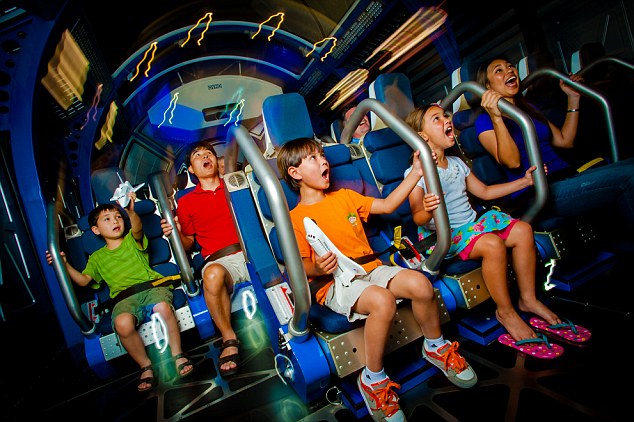 I am tempted to consider a career change.

Nasa’s first astronauts were military test pilots, launched into space on converted intercontinental missiles. These are in the Rocket Garden, alongside mock-ups of the Mercury and Gemini capsules, which carried the crew. You can squeeze into one to get a sense of the cramped conditions.

But it was the Apollo programme that made Kennedy Space Center famous. To put a man on the moon, Nasa created the Saturn V, the largest and most powerful rocket ever built. One of them, which would have launched Apollo 18, is still here.

Standing beneath the five gigantic engines, which burned 15 tons of fuel a second, I squint to make out the crew capsule, 360 ft away at the other end.

Surrounding it are artefacts from the landings, such as a spacesuit covered in moon dust and a moon rock you can touch. 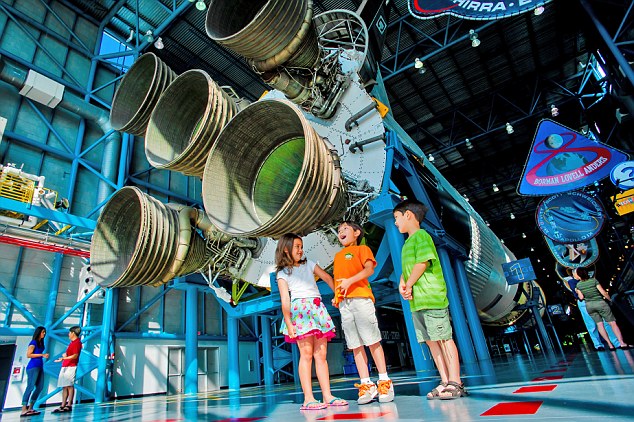 To infinity, and beyond: Nasa created the powerful Saturn V to help them put man on the moon

No one has returned to the moon since Apollo 17, 45 years ago, and it remains the high water mark of human exploration. Since Atlantis touched down for the final time in 2011, Nasa has had to pay Russia to send American astronauts to the International Space Station (ISS). All that is about to change. On the Launch Director Tour, we see the vast white hangar belonging to SPACEX.

In February this year, the private company, owned by Elon Musk of Tesla cars fame, launched its first rocket from Kennedy.

In 2018, it will fly astronauts to the ISS, giving Nasa the ability, once again, to launch American astronauts from American soil.

But Nasa has even bigger plans. Outside the Vehicle Assembly Building (the largest single-storey building in the world) is the 40-storey launch gantry for the Space Launch System.

This is the project that will return man to the moon and, eventually, to Mars. To me, manned spaceflight has always symbolised what we can achieve when united in common purpose.

Kennedy Space Center pays tribute to a magnificent past, while inspiring us all for the future.