SBS has been accused of skewing data to serve its new documentary about sexism in Australia.

The publicly funded broadcaster released a trailer for a documentary titled ‘Is Australia Sexist?’, intended to fairly assess gender discrimination in Australia.

Based on findings in the Global Gender Gap report of 2017, SBS commissioned its own survey, one they described as the largest of its kind.

Close to 4000 men and women were asked to provide answers to a series of questions about sexism, feminism, gender and online harassment.

Alarming statistics were released in the teaser trailer, documenting abuse faced by women in the workforce, sexual harassment and inequity.

But it was all described as ‘blatant propaganda’ by sex therapist and clinical psychologist Bettina Arndt, writing for The Australian.

As a contributor throughout the filming process, Ms Arndt participated to offer insight into some of the less-documented results of the research.

In particular, Ms Arndt was offered statistics finding only 19 per cent of Australians identify as feminist. 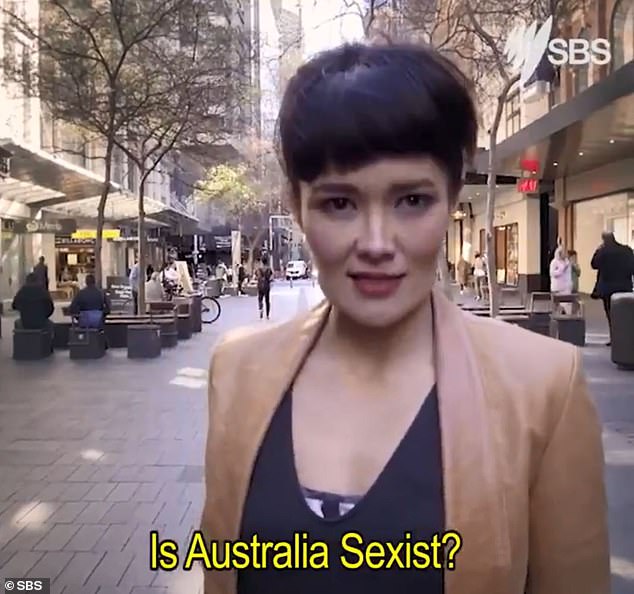 ‘I was greatly relieved to discover that my interviews weren’t included in this blatan­t propaganda exercise,’ Ms Arndt said, claiming none of her interview made it to the show’s final cut.

‘We were aware how easy it would have been for my long interviews to be edited to misrepresent me. What’s the bet that none of the survey results that challenge the SBS narrative are mentioned?’

Social media users were quick to vilify SBS for the trailer.

‘Never let facts get in the way of a good narrative,’ one wrote.

‘Please take a holiday to any other country in the world. Australia along with other Western democracies are the most tolerant and non-sexist countries in the world,’ another wrote.

But others disagreed, saying the documentary looked like a great exposé on the impact and scope of sexism in Australia.

‘How many women were murdered this week. Who needs to cherry pick?’ one woman questioned.

Others defended the practices of the SBS, suggesting that the statistics shown are the most necessary

According to the Global Gender Gap Report of 2017, Australia’s ranking as the 35th most equal country in the world has risen several ranks in the 12 months since the 2016 report.

The report credited the gradual improvement to ‘gender parity in the country’s share of legislators, senior officials and managers.’

It also mentioned ‘notable improvements on the political empowerment sub-index, with an increased share of female parliamentarians as well as women in ministerial positions.’

But the SBS documentary trailer explicitly stated Australia had ‘tumbled down international rankings to now sit below some developing countries.’

‘We are promised shocking findings about our sexist country showing how hard life it is for women dealing with the wage gap, the constant underlying threat of rape,’ Ms Arndt said.

‘SBS’s values of being ‘fair, clear and transparent’ are hardly demonstrated by suppressing key results of a commissioned survey.’

An SBS spokeswoman said: ‘SBS takes its editorial integrity seriously. It is impossible for any one hour documentary to explore every viewpoint and angle on very complex issues.

‘The findings from Australia’s largest national survey on the issue of sexism overwhelmingly showed women as the main targets of this particular harassment, and as such, this was the central experience explored in the documentary.’