For most women, borrowing a sweater or hoody is about as far as they’ll venture into their partner’s closet.

But blogger Safiya Nygaard, 26, from Los Angeles, decided to wear only her boyfriend’s clothes for a whole week to see if she could pull off his style and make it her own, documenting the entire experience in a video posted to YouTube.

Explaining why she chose to complete the challenge, Safiya explained: ‘I’ve done many style challenges for a week, but I’ve never tackled menswear, so I decided to wear my boyfriend Tyler’s clothing for a week to see what would happen!’ 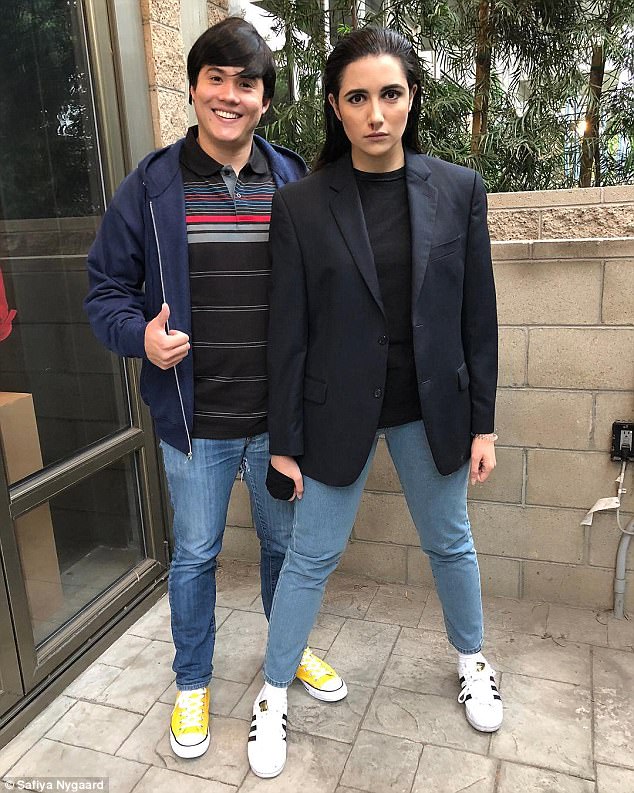 Test: The couple decided to do the experiment to see if Safiya could pull off wearing menswear for a week, pictured here on Halloween, before the experiment

Revealing that her plan was to try out some outfits her boyfriend actually wears and some that ‘might actually work for me’, Safiya explained that she also wanted to show Tyler all the clothing possibilities that are already in his closet.

‘Tyler and I have pretty different styles, I feel like Tyler has a pretty sporty look, you know, T-shirt, jeans, a lot of gym shorts.

‘But I do know he has a lot of quarter zips and polos in there,’ she stated at the start of the video.

And the results were surprisingly stylish, with Safiya transforming some her boyfriend’s tried-and-tested everyday staples into chic, retro inspired ensembles.

For her first outfit, she opted for 17-year-old navy gym shorts from his 4th grade little-league basketball team, worn with a blue quarter-zip top.

‘I feel like this is just classic Tyler, wearing gym shorts anywhere at all times, most of the days,’ she told the camera.

Walking around LA, she said that she felt like she didn’t stand out but, rather, looked like she was going to the gym.

And although she felt ‘very comfortable’, she also shared that it felt like she was wearing pajamas.

‘This is pretty different from my usual style, but I think it represents Tyler’s style pretty well, and for the first day of this week, it was pretty easy and breezy.’

Lumber sexual: For her second outfit, Safiya opted for a plaid shirt and grey skinny pants, paired with Timberland boots

‘I’m a big fan of Tyler in these Timeberland boots so I was kust trying to bring them back out there.’

Layering the tops and tying the shirt up to give it some shape, Safiya said she felt like James Dean and hoped her boyfriend would be encouraged to wear the pieces more.

For the third day of the experiment, Safiya chose to wear a Star Wars sweatshirt she bought Tyler for Christmas two years ago.

Featuring Darth Vader on the front, she teamed it with skinny jeans and boots.

She chose the dark wash jeans as the blue jeans she wanted to wear were ripped on the leg and butt.

While lamenting her boyfriend’s lack of clean clothes for her to choose from she said: ‘I would wear this again, but I feel we need to wash it.’

Stepping into shot in a pair of blue jeans and blue polo shirt tucked in, Safiya revealed that her fourth outfit harked back to her boyfriend’s ‘preppier days’.

She ‘popped’ the collar and added a brown leather belt and brown leather loafers. ‘I don’t see Tyler wearing this outfit all the time, but it was revealed to me that he wore this outfit specifically at his old job. I feel like you would find this outfit digging through Tyler’s Facebook photos.’

Retro preppy: Although he doesn’t wear them often, Tyler still has lots of polo shirts in his closet and Safiya was happy to take on the preppy staple

She also shared that she used to wear polo shirts in the mid-2000s but doesn’t still own them. ‘This outfit kind of gave me a ’50s vibe for some reason, almost like I could be at a soda shop’.

Although she felt like she wouldn’t wear that exact outfit again, she did say she was now considering buying a pair of cropped high-waisted pants and a tucked-in shirt.

Describing this as her ‘Tyler in Vegas look’, Safiya donned grey skinny pants, a stripe button-down shirt, grey pinstripe waistcoat, grey skinny tie and brown lace up shoes for her next look.

Tyler said he used to call this outfit ‘the Tommy Timberlake – half Tom Haverford [referring to Aziz Ansari’s character in Parks and Recreation] and Justin Timberlake’.

Join the club: Safiya’s boyfriend Tyler said he used to wear this outfit to get into clubs

‘Typer doesn’t wear this style very often but he does sometimes, when he’s prodded,’ she explained.

Describing it as ‘very different’ from her usual style, she did say the outfit brought back some memories of a waistcoat she wore in the 2000s.

For her next look, Safiya picked a pair of acidwash jeans, a sleeveless ‘muscle tee’ and tied a sweater around her waist. She also wore yellow Converse sneakers.

‘This made me feel like a late Eighties, early Nineties tomboy,’ she explained.

Saved by the bell: The blogger told the camera she enjoyed wearing this outfit inspired by the early Nineties

She also compared herself to Mario Lopez’s AC Slater character in Saved By The Bell.

‘I feel like overall the outfit was fun,’ she said, noting she would wear it again.

Going ‘rogue’, for her last outfit, Safiya chose random pieces from Tyler’s wardrobe that he hasn’t ever worn together.

Her final outfit featured a white button-down shirt, fish print belt, black flares and brown pointy loafers. Sofiya also chose a belt so she could cinch in her waist, and she loved the pants so much, Tyler gave them to her.

‘I really enjoyed wearing this outfit and I’m glad the John Travolta pants got another day out in the sun,’ she said.

After the experiment, Safiya said her favorite outfits were from days two, six and seven, but besides that, she felt comfortable in most things and even wanted to pinch some of Tyler’s clothes for her own closet.