Two NSW State of Origin stars went above and beyond on Sunday to ensure the Blues took the series to a game three decider next month.

Classy centre Matt Burton and interchange backrower Angus Crichton both battled stomach churning obstacles versus the Maroons – and it paid off handsomely, with Brad Fittler’s men cruising to a 44-12 win in Perth.

Footage from TikTok shows debutant Burton, 22, releasing some ‘nervous energy’ in the sheds after a commanding individual performance – and Sydney Roosters second-rower Crichton has since revealed he almost didn’t play due to a serious bout of gastro.

Crichton, 26, vomited three times on the sideline at Optus Stadium, with two Blues staffers required to assist him from the field at half-time.

‘I was sick on Sunday morning and I couldn’t hold any food or water down all day,’ Crichton told the Sydney Morning Herald. 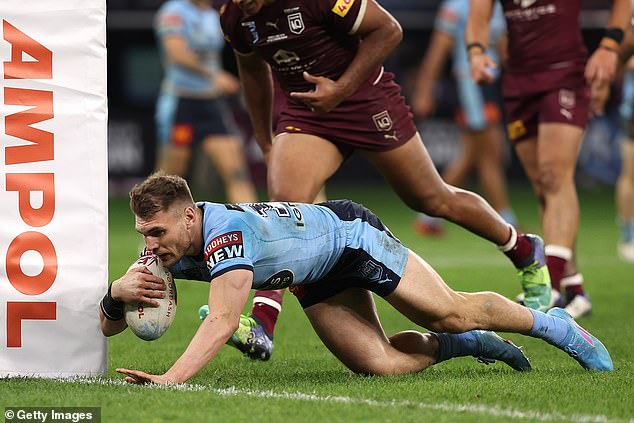 Angus Crichton was close to being a late withdrawal for NSW due to a stomach bug, but in the end toughed it out (pictured, scoring a late try)

‘I took some Imodium, but everything I ate or drank came straight back up. I must have been sick more than half a dozen times. I also vomited in the showers before the game.’

Crichton was close to being a late withdrawal, but in the end felt he was healthy enough to add some impact off the spine.

He crossed the stripe in the 73rd minute and will now look to take on the Panthers this Friday at BlueBet Stadium in round 16 of the NRL – featuring seven of his NSW teammates.

The Origin series decider will be staged at Suncorp Stadium in Brisbane on Wednesday, July 13.

Despite’s NSW’s impressive performance over in the west, Fittler will have a number of selection headaches as he looks to topple the Maroons in front of their adoring fans. 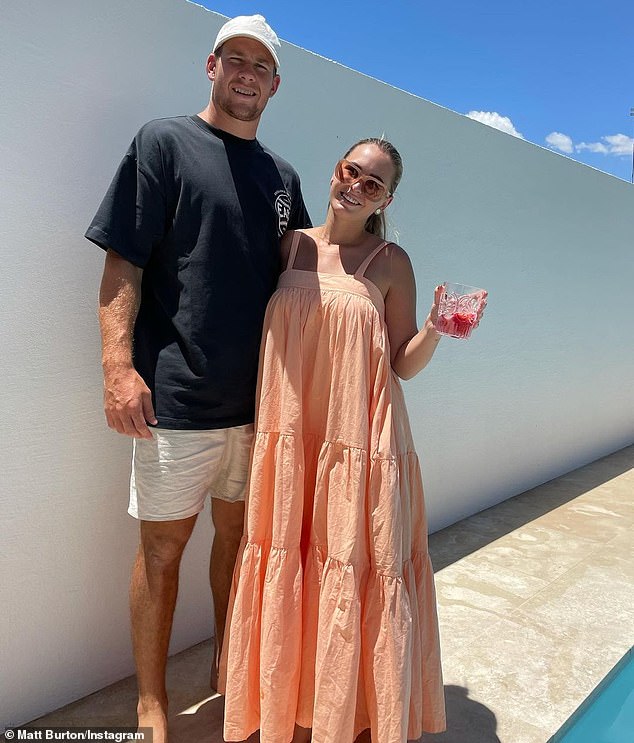 Burton was highly impressive on debut for NSW, scoring a try and producing a number of clutch plays

Superstar Latrell Mitchell – who hasn’t played in the first two games due to injury and then contracting Covid – has put his hand up to play with everything on the line, and Jack Wighton will also be in the mix.

Arguably the Blues best player in game one at Accor Stadium in Sydney, the Canberra star could replace Penrith’s Stephen Crichton.

Wighton didn’t play in Perth after contracting Covid himself.

Fittler, 50, is gunning for his fourth Origin series win as coach in the past five years.