Scientists discovered a protein produced by deadly malaria parasites binds to a molecule present on most cancer cells, including pancreatic forms of the disease.

When 10 cancer cells were exposed to the protein in the lab, nine successfully bound to it, the study found.

Study author Professor Ali Salanti, from the University of Copenhagen, said: ‘We have developed a method where we take a blood sample and with great sensitivity and specificity, we’re able to retrieve the individual cancer cells from the blood.

‘Today, it’s difficult to determine which stage cancer is at. Our method has enabled us to detect cancer at stages one, two, three and four.

‘Based on the number of circulating tumour cells we find in someone’s blood, we’ll be able to determine whether it’s a relatively aggressive cancer or not so then to adjust the treatment accordingly.’

Around 2.5 million people in the UK are living with a cancer diagnosis. The disease affects approximately 430 new people in every 1,000 annually in the US.

CAN NON-STICK PANS CAUSE CANCER?

Chemicals in non-stick pans get into drinking water and may cause cancer, a report released in June 2018 warned.

According to the Washington DC-based Environmental Protection Agency, microscopic particles in chemicals found in non-stick cookware, water-resistant clothing and stain-proof carpets break off and enter the food chain.

A past study found PFOAs appear in one third of food packaging, with manufacturers arguing the chemical extends produce’s shelf life and quality, making it safer.

Washington state representative Joan McBride told PEW: ‘People now realise it doesn’t just matter what you put in your mouth but what that food product is wrapped in.

‘These chemicals are called persistent chemicals. They stay with you, they’re insidious.’

In the US, PFOAs are above recommended levels in up to 33 states.

The chemical is banned from fire-fighting foam in Washington state, with PFAS also being prohibited from being used in the region’s fast-food restaurants.

New Jersey has suggested placing limits on the amount of PFOAs permitted in water to 13-to-14 parts per trillion.

PFOAs are widely used in the UK.

The researchers added 10 cancer cells to 5ml of blood.

To the blood sample, they mixed in a synthetic version of the malaria protein, known as VAR2CSA, which was fused with a tiny magnetic bead.

Results, published in the journal Nature Communications, suggest cancer cells in blood stick to the magnet, allowing them to be analysed for diagnoses.

Study author Mette Ørskov Agerbæk said: ‘We count the number of cancer cells and based on that we’re able to make a prognosis.

‘You can, for example, decide to change a given treatment if the number of circulating tumour cells does not change during the treatment the patient is currently undergoing.’

‘Offers the opportunity to detect cancer earlier and improve outcomes’

Speaking of the newfound diagnosis method, Professor Salanti said: ‘We have developed a method where we take a blood sample and with great sensitivity and specificity, we’re able to retrieve the individual cancer cells from the blood.

‘We catch the cancer cells in greater numbers than existing methods, which offers the opportunity to detect cancer earlier and thus improve outcome.’

Current cancer diagnosis methods detect markers on tumours, however, not all cancerous growths have these markers, such as liver, lung and bone forms of the disease.

Professor Salanti added: ‘You can use this method to diagnose broadly, as it’s not dependent on cancer type.

‘We have already detected various types of cancer cells in blood samples. And if there is a cancer cell in your blood, you have a tumour somewhere in your body.’

The malaria-protein method detects liver and pancreatic cancers, with the latter having just a seven per cent five-year survival rate due to it often being diagnosed too late.

The researchers hope the blood sample will be carried out on at-risk people, such as those with a family history of cancer. 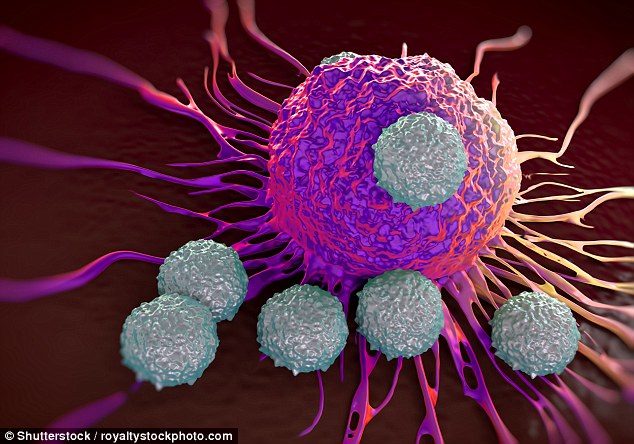 Scientists discovered a protein produced by deadly malaria parasites binds to a molecule on more than 95 per cent of cancer cells, including pancreatic forms of the disease (stock)

Cancer drug hijacks the ‘survival mechanism’ of a tumour

This comes after research released last January suggested a cancer drug is in development that could stop the disease in its tracks.

The unnamed medication targets a specific enzyme that fuels the spread of tumours, a study by Uppsala University found.

It does this by binding to the membrane of rapidly multiplying cells, the research adds.

This hijacks cancer’s ‘survival mechanism’ and prevents tumours from attaching to the protein they need to thrive. It is unclear when the drug could be available.