A breakthrough new blood test can quickly tell physicians a patients risk of dying or suffering severe complications from a head injury – and as a result allow them to act faster in certain high risk cases to save a life they may not have otherwise.

A joint research team from the University of California, San Francisco (UCSF), University of Pennsylvania and University of Michigan found that they could test for two specific biomarkers that indicate a person’s risk of severe disability or death from a head injury in only minutes using portable blood analyzers.

In doing so, doctors can get a snapshot of how serious a case they are dealing with. This allows to to act faster when providing more significant medical treatment – which doctors can be late on if they do not realize the true extent of a person’s injury at first.

These findings could be extremely valuable, as the Centers for Disease Control and Prevention reports that traumatic brain injury (TBI) is one of the leading causes of death and disability among America’s youth. In total, 50,000 Americans die from a TBI each year, and nearly 100,000 suffer long-term disability.

‘We believe this tool may encourage clinicians to be more aggressive in their decisions to begin or continue life-saving treatment,’ Dr Geoffrey Manley, co-author of the study and vice-chair of neurosurgery at USCF said in a statement.

Researchers, who published their findings Wednesday in the Lancet, use the biomarkers GFAP and UCH-L1 as the centerpiece of their testing.

Levels of both proteins in a person’s blood after a TBI can indicate the severity of an injury, and determine the risk of the worst possible outcomes.

They gathered data from 1,696 patients who has presented to a medical facility with a TBI and had a blood sample gathered. 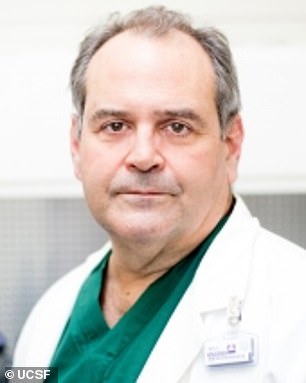 Dr Geoffrey Manley (pictured), vice-chair of neurology at UCSF, said that the test is both diagnostic and prognostic

Of the sample, seven percent of patients had died as a result of their injury. Another 14 percent had an ‘unfavorable outcome’ that placed them between categories two and four.

These include a person living but being in a vegetative state, or suffering a significant disability as a result of the injury.

The test developed by the researchers was highly effective at determining whether a patient would die, doing so with near 90 percent accuracy.

It was also able to predict a patient’s risk of severe disability with around 85 percent accuracy.

As the severity of injury lessoned, so did its accuracy, falling into the 60 percent range for predicting whether a person would make a full recovery or continue living with a light disability.

Manley described the process as ‘both diagnostic and prognostic’, not only telling physicians what is wrong now but also what will potentially go wrong in the near future.

There already are some ways to gauge brain damage after a traumatic injury, but being able to do so with a quick blood test is more efficient.

At the moment, a patient will need at MRI and CT scan to determine the true extent of their injury. Not all medical facilities have access to these devices, though, and there also could be long wait times to use them.

These findings can be significant for medical professionals going forward. The CDC estimated that around 1.5 million Americans suffer a TBI each year.