Bloodbath London: Man in his 20s is stabbed to death outside train station – the fourth attack today

Bloodbath London: Man in his 20s is stabbed to death outside train station – the FOURTH knifing in the capital since lunchtime that also saw a schoolboy left for dead in the street

By Rod Ardehali and Jessica Green For Mailonline

A man has been stabbed to death outside of a train station, the fourth in a series of horrifying knife attacks since lunchtime that also saw a schoolboy left for dead.

Marking yet another bloody chapter of violence plaguing the capital, the Met Police were called to four separate incidents today, all involving bladed articles.

The four today, making it six stabbings in the past night days, highlight the knife crime epidemic gripping London, following last year’s horrific series of attacks – the bloodiest in almost a decade – as the number of homicides reached 135 by year end.

There have been 12 fatal stabbings in London in 2019 so far.

One: A man in Enfield, believed to be aged in his 30s, suffering a stab wound to his thigh was taken to hospital – he has since been discharged 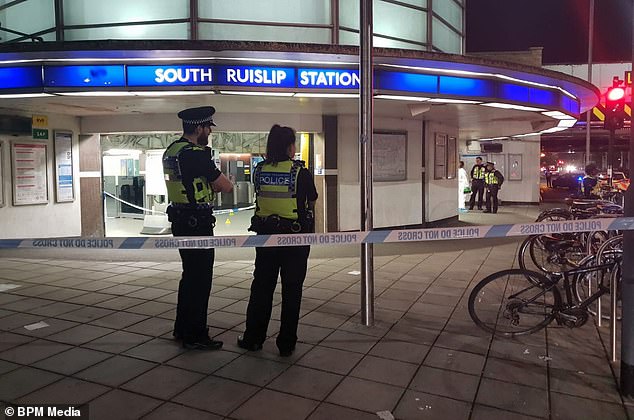 Two: The victim has been rushed to a major trauma centre while South Ruislip (pictured) station, west London, is closed and the surrounding area has been cordoned off as police investigate 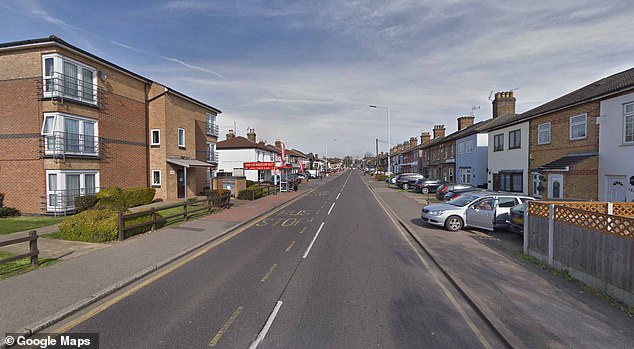 Three: An 18-year-old man in Romford was taken to hospital suffering stab injuries. Doctors say his wounds are serious but not life threatening 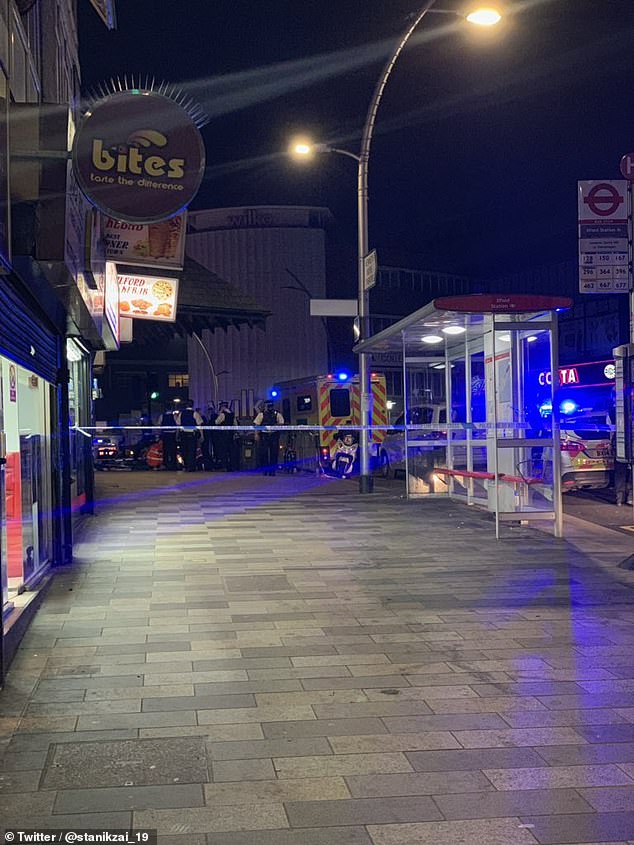 Four: A man in his 20s was killed outside of Ilford train station in east London shortly before 9pm. He was declared dead at the scene and no arrests have been made 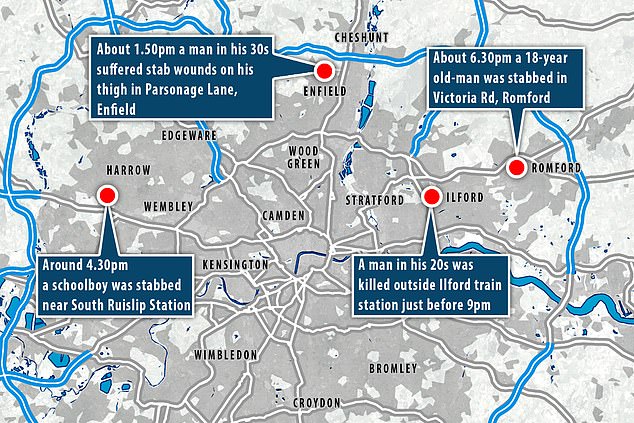 The most recent incident was the only fatal incident of the day.

A Met Police spokesperson said they were called at 20:48 to a man stabbed in Ilford.

‘Officers attended the location along with London Ambulance Service. A man, believed to be aged in his 20s, was found suffering serious stab injuries.’

The as yet unidentified man was pronounced dead at 21:19, his next of kin have yet to be informed.

Among the most harrowing of attacks was the schoolboy left for dead earlier today.

The victim was rushed to a major trauma centre as ‘a priority’ while South Ruislip station, west London, was closed and the surrounding area cordoned off as police investigated.

A terrified witness said: ‘I saw a school boy in uniform stabbed in the side and he didn’t look in a good way. He was face down on the pavement and was shaking. Think he was in shock.’

Another told MyLondon: ‘A schoolboy was stabbed, my daughter was there when he fell to the floor.’

British Transport Police confirmed a ‘young man’ was taken to hospital after being stabbed at about 4.30pm.

His injuries are not thought to be life threatening.

‘Officers attended the scene, alongside colleagues from the London Ambulance Service, and a young man was taken to hospital with what is believed to be a stab wound to his abdomen.

‘His injuries are not thought to be life threatening. Officers investigating the incident are appealing for witnesses to get in touch.

An investigation into the stabbing is ongoing and no arrests have been made.

‘We treated a person at the scene and took them by road to a major trauma centre as a priority.’

In Enfield police were called to reports of an altercation and found a man in his 30s with a stab wound to the thigh.

Police say was taken to hospital and has since been discharged from hospital.

One man was arrested at the scene on suspicion of GBH and taken into custody where he remains.

Finally, police were called to a stabbing in Romford along with the London Ambulance Service who treated at 18-year-old man for stab injuries.

The wounds are considered serious but non life-threatening. 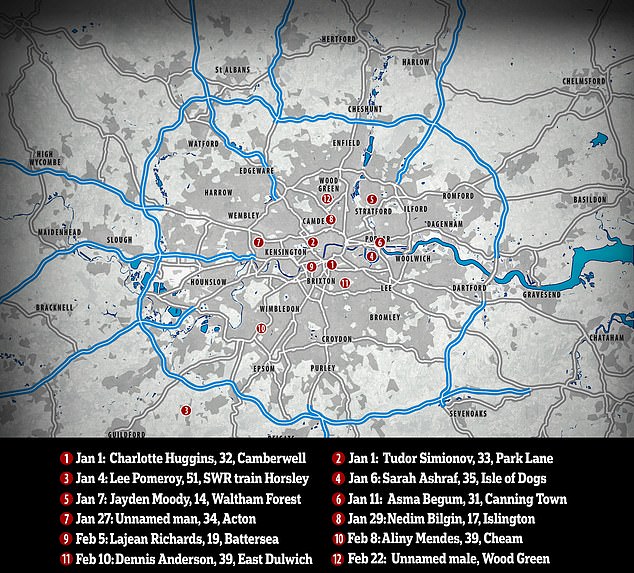 There have been at least 12 other fatal stabbings in London since January 1, 2019

Boy, 16, is stabbed in the leg at a British Heart Foundation store in Birmingham city centre

A 16-year-old boy has been taken to hospital after he was knifed in the leg in Birmingham city centre this afternoon.

Police have sealed off parts of Bull Street following the stabbing in a British Heart Foundation store – which has a large blood stain on the carpet inside.

Shoppers crowded around the scene while police searched bushes in the area after being called to the incident at around 5.30pm today.

A West Midlands Police spokesperson said: ‘Police have been called to a stabbing at a shop in Bull Street, Birmingham city centre, around 5.30pm today (Tuesday 26 February). 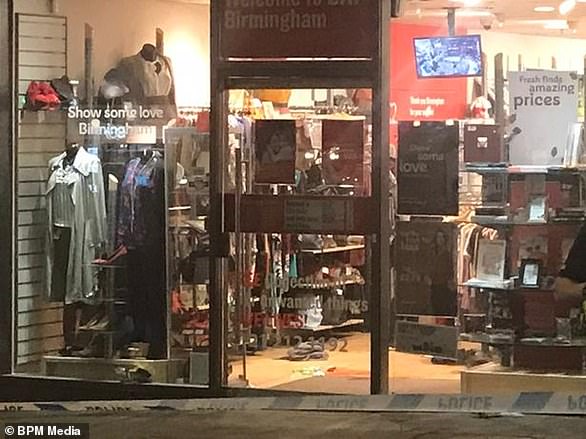 ‘A 16-year-old boy has been taken to hospital with a leg injury.

‘Enquiries are at an early stage and anyone with information is asked to contact police.’

It comes as the police force try to clamp down on knife crime after three teenagers were fatally stabbed in just 12 days.

A knife arch was placed outside McDonald’s in nearby High Street, with officers also using stop and search powers following the deaths.

Student Hazrat Umar, 17, died after being knifed in Cherrywood Road, Bordesley Green, at around 2pm on Monday.

West Midlands Police have revealed a 16-year-old youth has now been arrested on suspicion of murder.