This unassuming four-bedroom house in the bush is the only one of its kind in Australia.

The home in the Blue Mountains west of Sydney has no gaps on the outside and is clad in fibre cement, giving it Australia’s highest bushfire rating.

Builder Joe Mercieca and his wife Merylese, a former registered nurse, experienced firsthand the devastation of losing their possessions in a summer inferno.

That experience in 2013 inspired them to develop a house at Winmalee that can withstand the flames for up to 20 minutes – often enough time for the fire brigade to arrive. 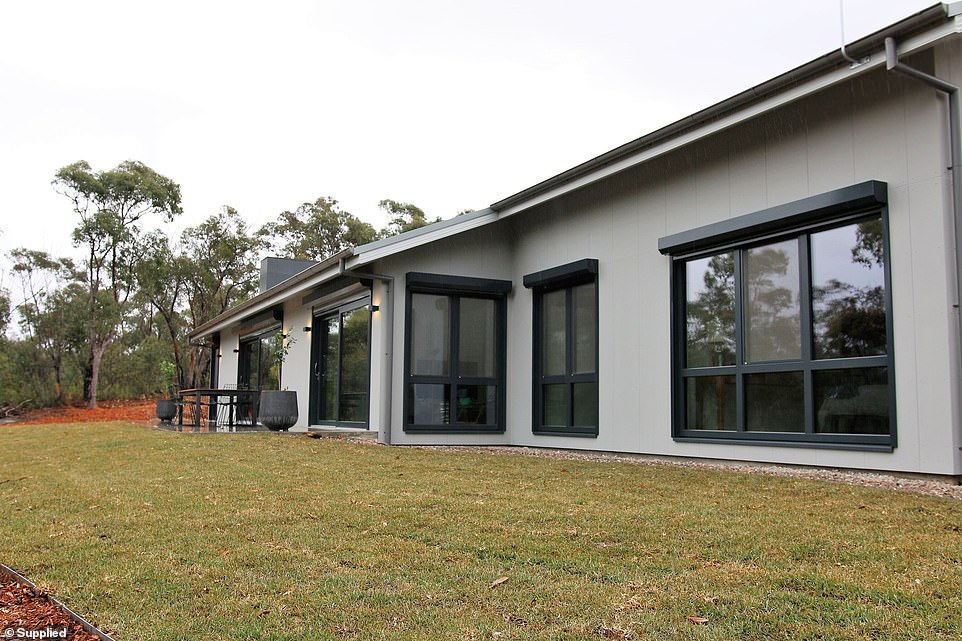 The home at Winmalee has no gaps on the outside and is clad in fibre cement, giving it Australia’s highest bushfire rating

‘Normally, the intensity of the fire’s about 20 minutes – the flame zone houses are designed to withstand for that 20 minutes.’

‘They will give you a better chance if you are caught in a fire than a standard home more than being out in the open or in a car.’

Every summer, millions of Australians living among the trees face the threat of bushfires as temperatures soar about 30 degrees Celsius and dry eucalyptus leaves became flammable.

To deal with that danger the Merciecas developed the display house, also known as the Sapphire, through their company Blue Eco Homes.

It has been built to Bushfire Attack Level regulations for homes in a fire zone, a standard also known as BAL-FZ, giving it Australia’s highest bushfire rating.

‘There’s certain requirements for materials. They need to be flame resistant to a certain time frame,’ Mrs Mercieca, the company’s business manager, said.

To achieve the highest fire rating, bricks are allowed if there are no gaps. 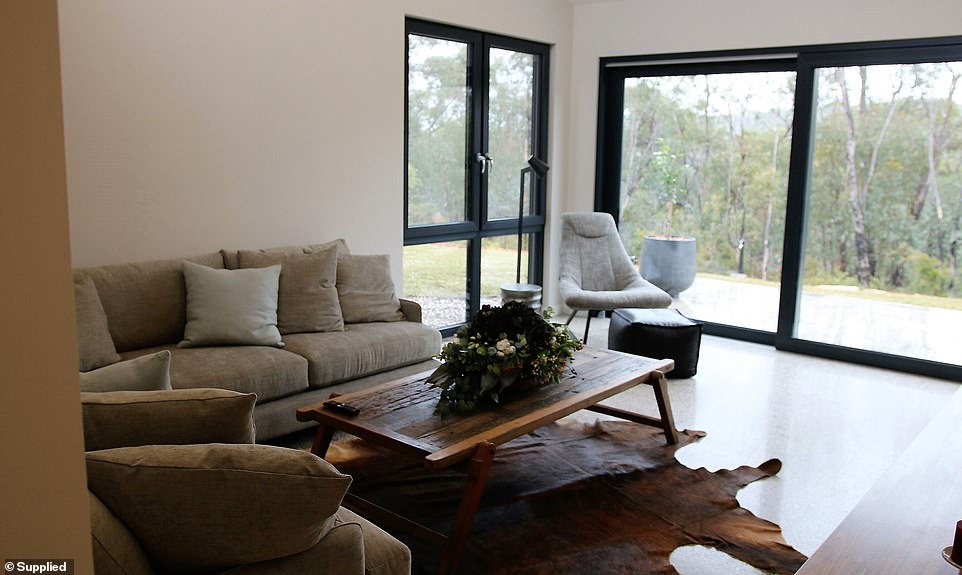 Blue Eco Homes business manager Merylese Mercieca said that unlike a conventional brick or timber house, the display house in Winmalee could withstand an inferno for up to 20 minutes

The Merciecas, however, have chosen cement cladding – still a boutique product in Australia.

‘Having no gaps so that embers can’t get into the home. The external material is like a concrete sheet,’ Mrs Mercieca said.

‘Any material used has to be non-flammable to a certain length of time.’

That means there is no timber on the outside or uncovered aluminium windows, which melt faster than steel.

‘If you’re going to use aluminium windows, you have to have steel shutters on them,’ she said.

In 2013, the Merciecas experienced bushfire devastation as a flames destroyed part of their Winmalee property.

‘It was our office and workshop part that burnt. The house actually was directly next door and it was okay,’ Mrs Mercieca said. ‘It was damaged but it didn’t burn down.’

The couple, originally from western Sydney, have lived and worked in the Blue Mountains for the past 27 years, raising three children there. 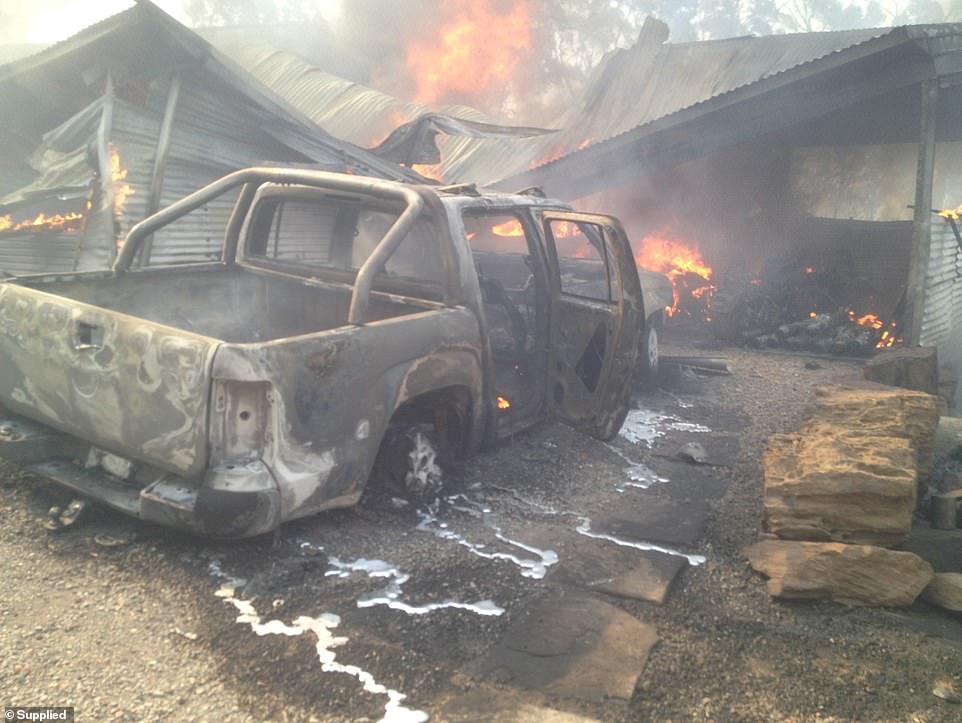 In 2013, they experienced devastation firsthand as a flames destroyed part of their property in the Blue Mountains (pictured is a burnt Volkswagen Amarok ute that was destroyed in the bushfire)

As parents, they saw the need for an energy efficient home, and designed a house with solar panels which are expected to deliver more than 75,000 kilowatt hours of electricity during the next 10 years.

Extra glazing, thicker insulation and airtight construction means the home’s internal temperature is kept between 20 and 25 degrees, reducing the need for artificial heating or cooling.

The Rural Fire Service in New South Wales has given it the tick for having a high fire rating.

‘It’s the first in Australia. We’ve taken it to the level where we can actually provide a home that is essentially as sustainable as you can be while still being the highest bushfire rating,’ Mrs Mercieca said. 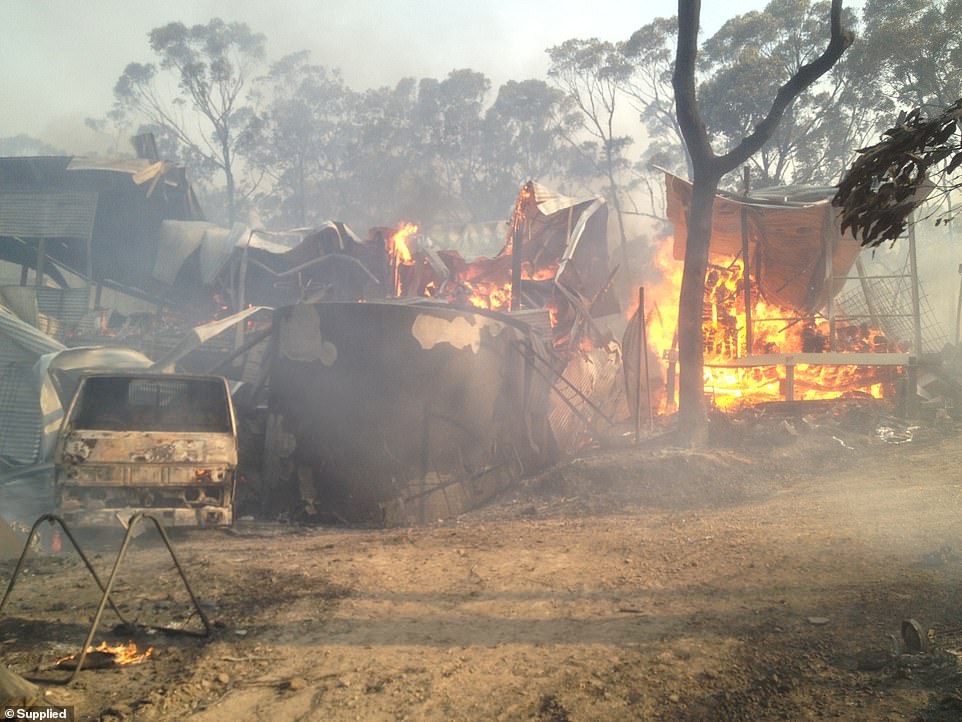 Every summer, millions of Australians living face the threat of bushfires as temperatures soar about 30 degrees Celsius and dry eucalyptus leaves became flammable (pictured are flames at Winmalee in the Blue Mountains in 2013)

Experts from the Australian Passive House Association were skeptical about the possibility of achieving the highest bushfire rating, when the Merciecas began developing their concept five years ago.

‘They said many people have tried but nobody’s actually been able to do it before so this is the first time we’ve been able to make it work,’ Mrs Mercieca said.

Building an energy efficient house from scratch with a higher bushfire resistance isn’t cheap, and is estimated to add an extra 15 to 20 per cent to the construction bill.

Having Australia’s highest fire rating means residents have more time to shield themselves inside.

The house is able to withstand a bushfire for 20 minutes, which is about four times longer than a conventional home.

‘We actually don’t like to use the word “fireproof” but nothing is fireproof – everything will burn,’ she said.

‘Certainly, if the fire brigade say, “There’s a fire, come and get out”, then you’re better off getting out.’ 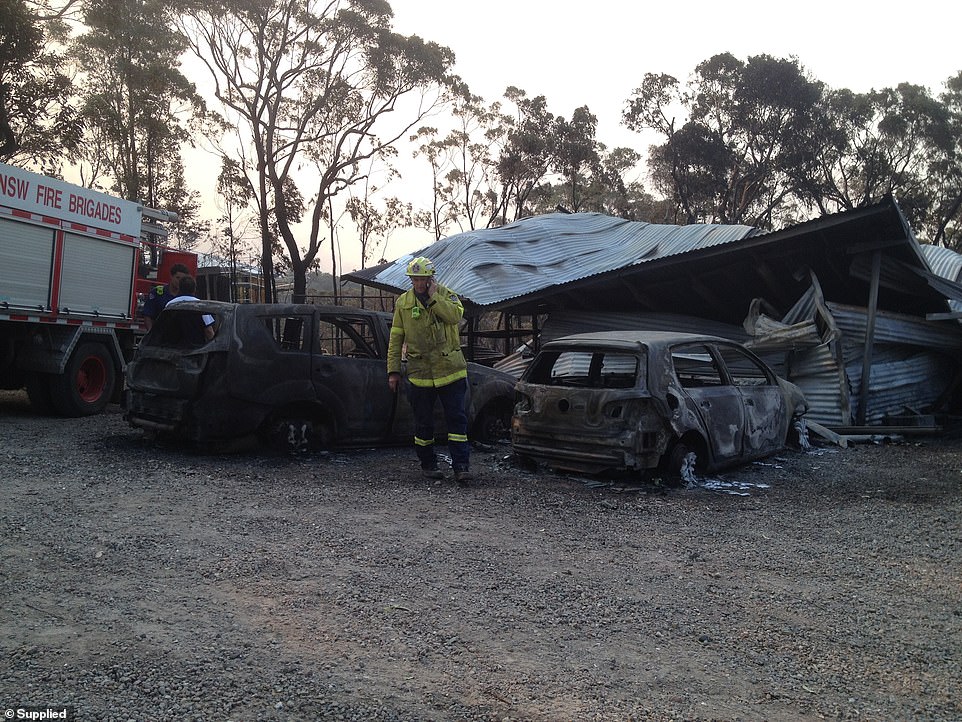 Experts from the Australian Passive House Association were skeptical about the possibility of achieving the highest bushfire rating, when the Merciecas began developing their concept five years ago shortly after experiencing the destructive forces of a summer inferno in 2013 (pictured)